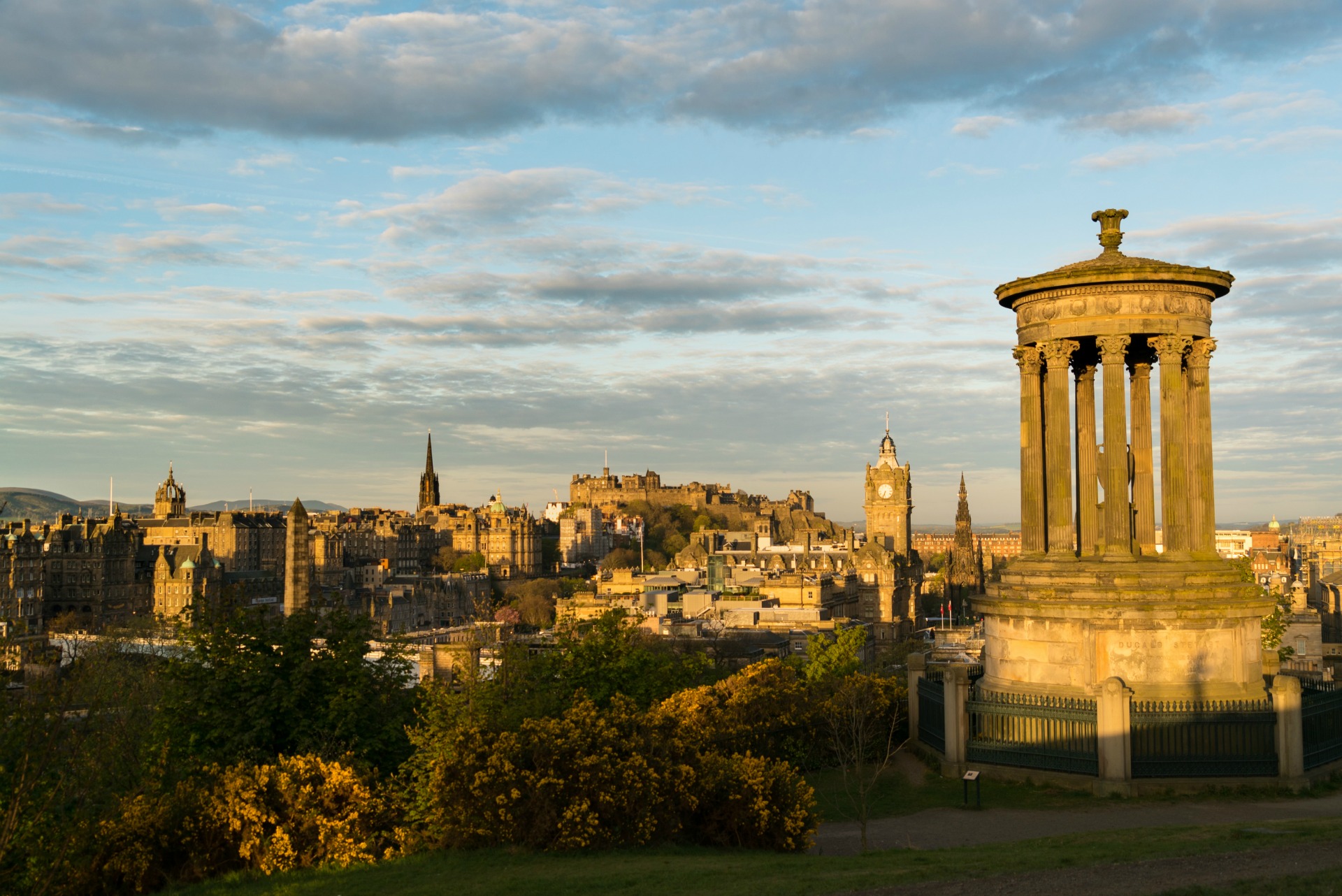 If you are following along, you will recall that when we last left our heroines they were holding onto each other in a graveyard tomb. Now you get to hear about the second day of our awesome girls’ weekend in Edinburgh, Scotland. Nothing creepy or scary happened. Just more food, gardens, and pretty buildings.

This time we crossed the bridge into New Town and Stockbridge. It isn’t far, but we did a lot of walking.

Jen and I were having a little Fitbit competition. Unfortunately for me, she is so tiny that she gets multiple steps for every one step I take. Her Fitbit would buzz at 10,000 steps while mine was at 8,000. When we are together, she will always outstep me. Not that I am competitive about it. We both passed 20,000 steps on this day.

Want to compete for steps with me? Get yourself a Fitbit on Amazon and look me up!

We stayed at the Radisson Blu on the Royal Mile. It’s a nice, comfortable hotel with a trendy lobby and bar…and it couldn’t be better located for visiting the best sites in Edinburgh. Staying in a hotel on the Royal Mile in Edinburgh is ideal for popping in and out throughout the day.

Brunch at the Pantry 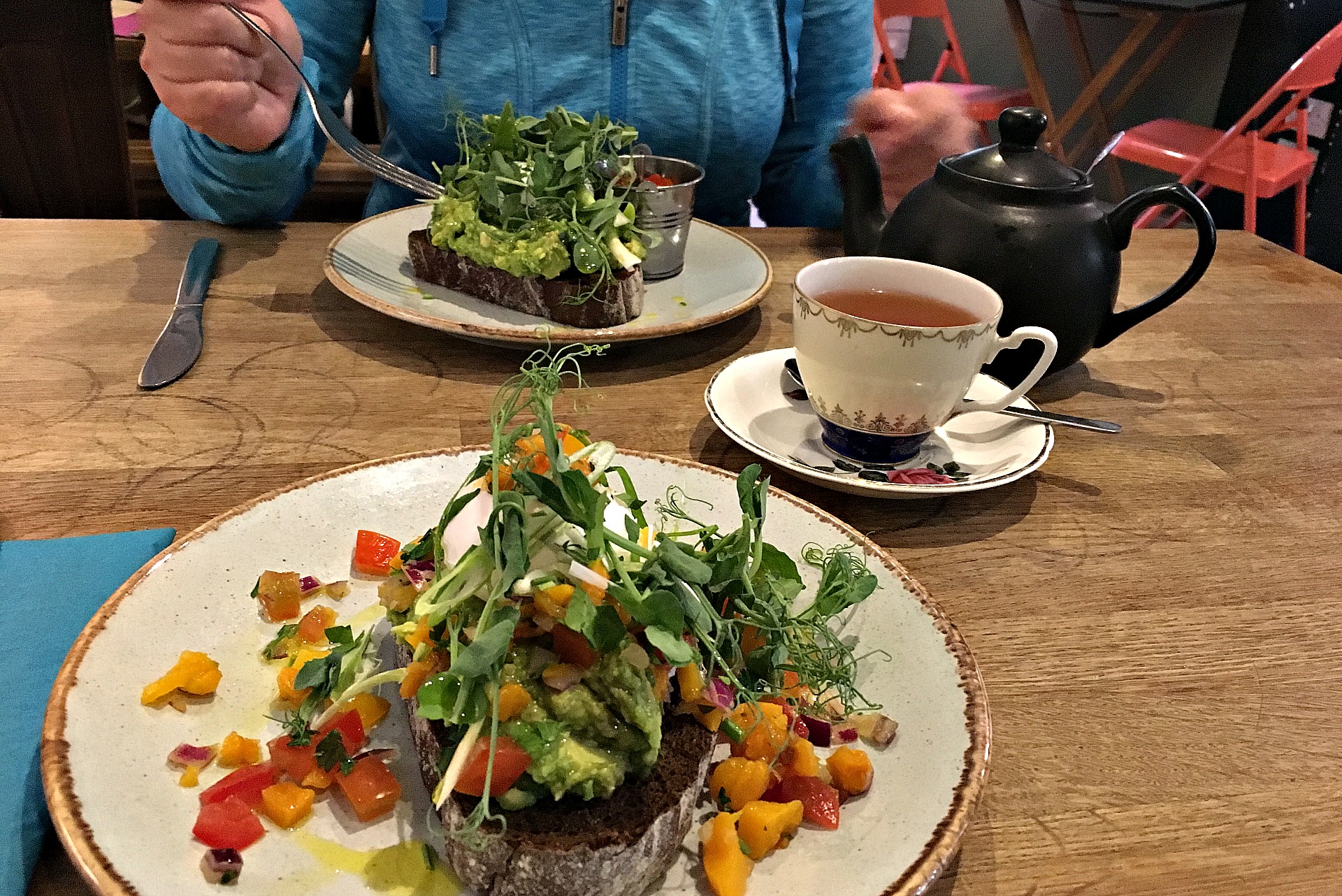 It was about a 25-minute walk from our hotel on the Royal Mile to the Pantry, so we were ready to eat when we got there. It was a lovely walk and such a cute café. There’s even a play area for kids, which makes it very family friendly.

But we weren’t there for the kids! We were there for avocado toast. Specifically, the LA Eggs. Chunky toast + smashed avocado + roasted pepper pico de gallo + a poached free range hens egg. So very good. 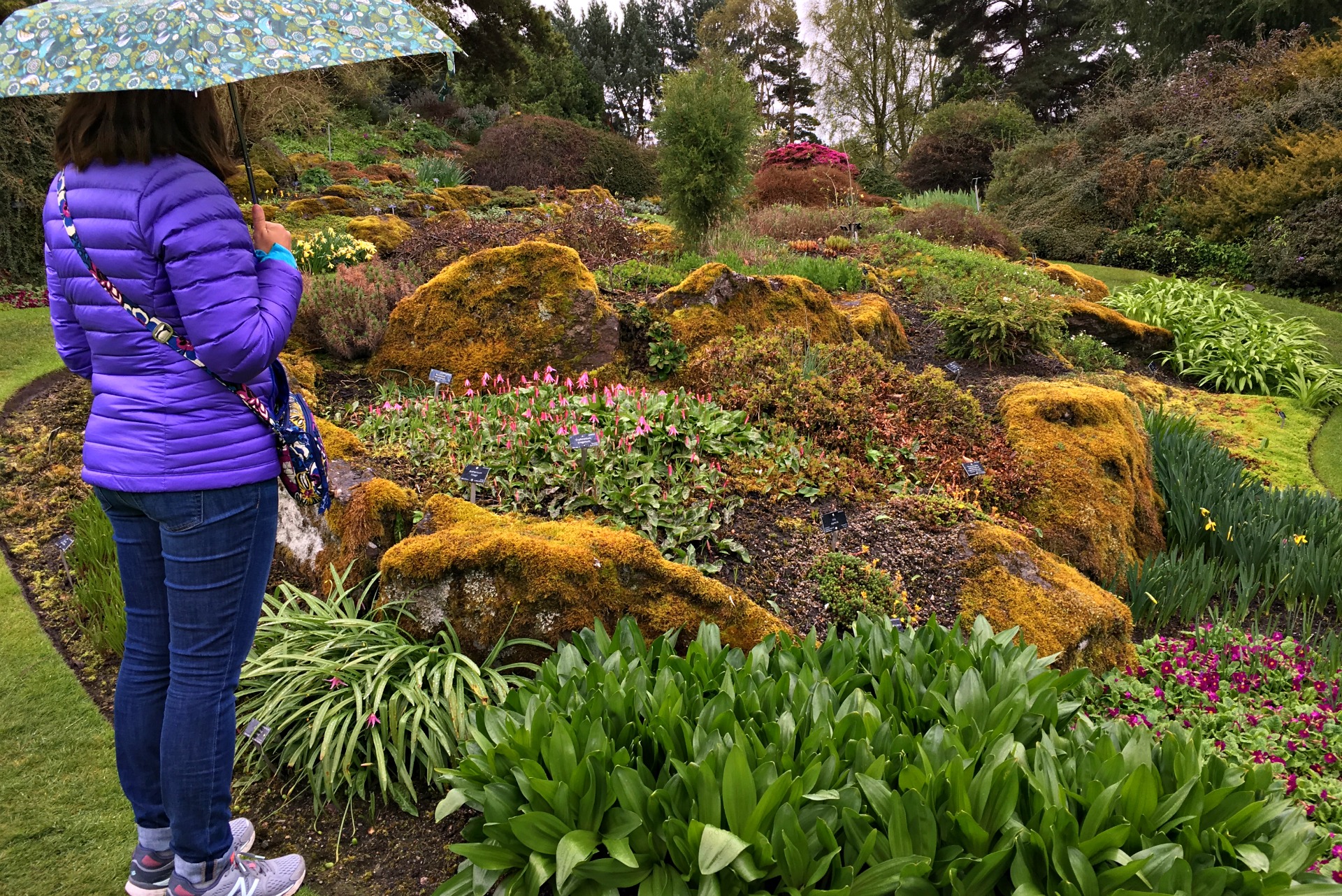 After brunch we strolled (20 minutes) over to the Royal Botanic Garden. It was raining a bit so we picked up umbrellas in the gift shop. Jen and I agreed that this is by far the best gift shop in Edinburgh. Ok, I haven’t been to many, but I wanted everything in the garden gift shop.

With matching floral print umbrellas in hand we headed out into the garden. There were so many flowers in bloom, everything was so lush and green, the water features beckoned us… we could not get enough of this place. I am glad we took our time and really explored.

We walked, but you can get here on the Lothian Buses, in a cab, or on bike via National Cycle Network Route 75. There are three cafés on the grounds in case you forgot to eat at the Pantry first.

It was about a half an hour walk from the gardens to our next stop, but the walk itself is noteworthy. We were able to use sections of the Water of Leith Walkway.

Not surprisingly the Water of Leith Walkway runs alongside the Water of Leith (a creek). The Water of Leith Conservation Trust works to conserve and enhance the river, its heritage and wildlife. Lots of people were out strolling through the parks along the pathway, riding bikes, or just using it as an quiet, scenic way to get from one part of the city to another.

You can buy a map online or plug in the directions from the gardens to Dean Village in Google Maps and it will show you the way. This lovely walk even made a list of non-touristy things to do in Edinburgh. 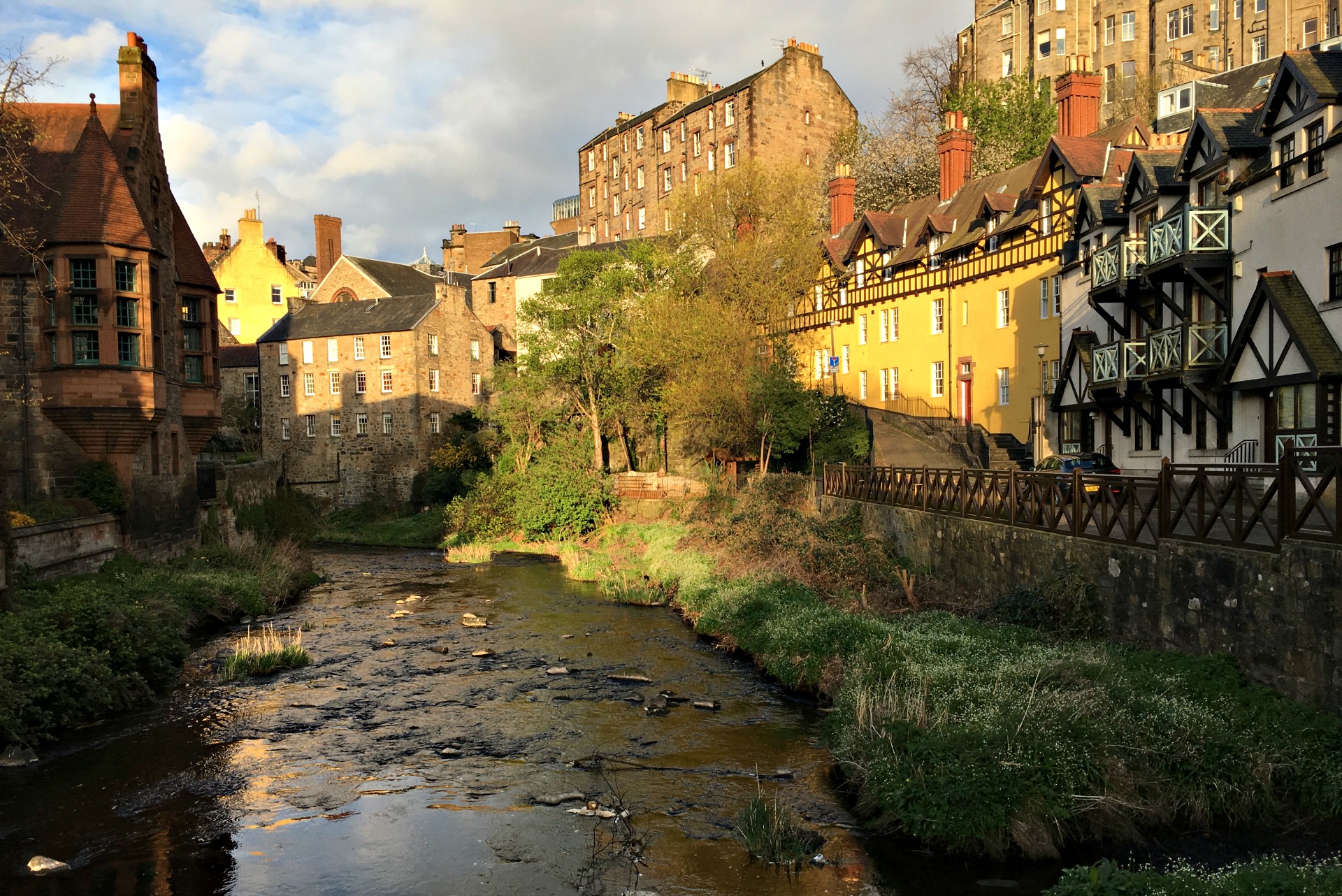 Once a separate village, Dean Village is now a neighborhood in Edinburgh. It was known as the “Water of Leith Village” and was the center of a successful grain milling area for more than 800 years. At one time there were no fewer than eleven working mills there, driven by the strong currents of the Water of Leith.

We were there to take photos. It’s really quite scenic and it’s a World Heritage Site. Jen had read about it online and really wanted to check it out. Good thing.

Start at the bridge on Dean Path, walk upstream along Hawthorne Bank Lane (southeast of the bridge), cross at the pedestrian bridge, and return up Damside.

The whole loop would take less than ten minutes to walk if you didn’t stop and enjoy.

If you cross the bridge you started on and continue up Bells Brae you’ll find taxis, restaurants, and anything else you need.

Dean Village, start at the corner of Dean Path and Damside (a taxi driver will know where that is, if you aren’t up for a walk.) 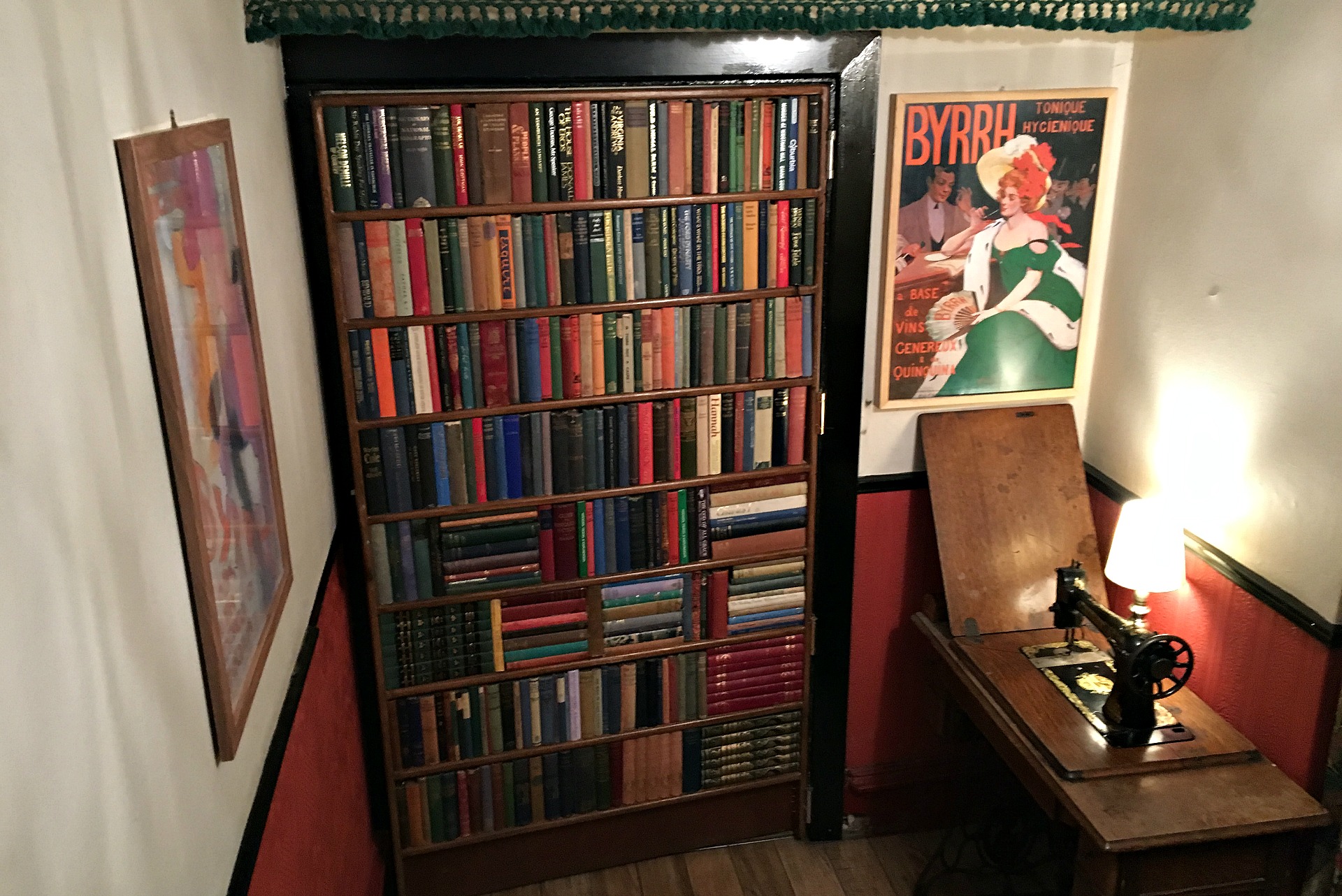 It’s merely a 10-minute walk to our next stop, if you can find it. After all that walking, we wanted a cocktail and snacks. We also wanted a fun place to do it.

Panda and Sons is like an old fashioned speakeasy. They never had prohibition in Scotland except in one small town that tried to emulate this American phenomenon. As our waitress said, they soon realized that was “mental.”

That didn’t stop 21st century Scots from opening a speakeasy. Look for an unassuming barber shop, walk down the stairs, and pull the bookcase forward to reveal a secret door. There you’ll find a warm and boisterous cocktail bar. The drinks we had were delicious and the spicy popcorn ensures you slurp down a few.

Make a reservation to ensure yourself a seat. We didn’t have one and had to stand at the bar for a few minutes. Luckily, since there were only two of us and it was early, they were able to squeeze us in at a small table.

Note: The menu on the website wasn’t up to date when we checked it. We spent half an hour reading through cocktails and picking our first and second choices only to find out they had a totally different menu. No big deal, just something to consider.

That wraps up day two of my awesome girls’ weekend in Edinburgh with wee Jen. We definitely packed a lot in, got our steps, and had a great time. The best part, of course, was hanging out with my friend. And that’s what a retreat like this is all about.

Edinburgh gets more tourist traffic than nearby Glasgow, but there are a lot of things to do in Glasgow, too. There is even a botanical garden. That’s on our next trip.

Things to Do in Edinburgh (more posts!) 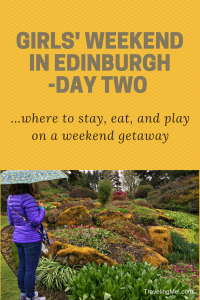