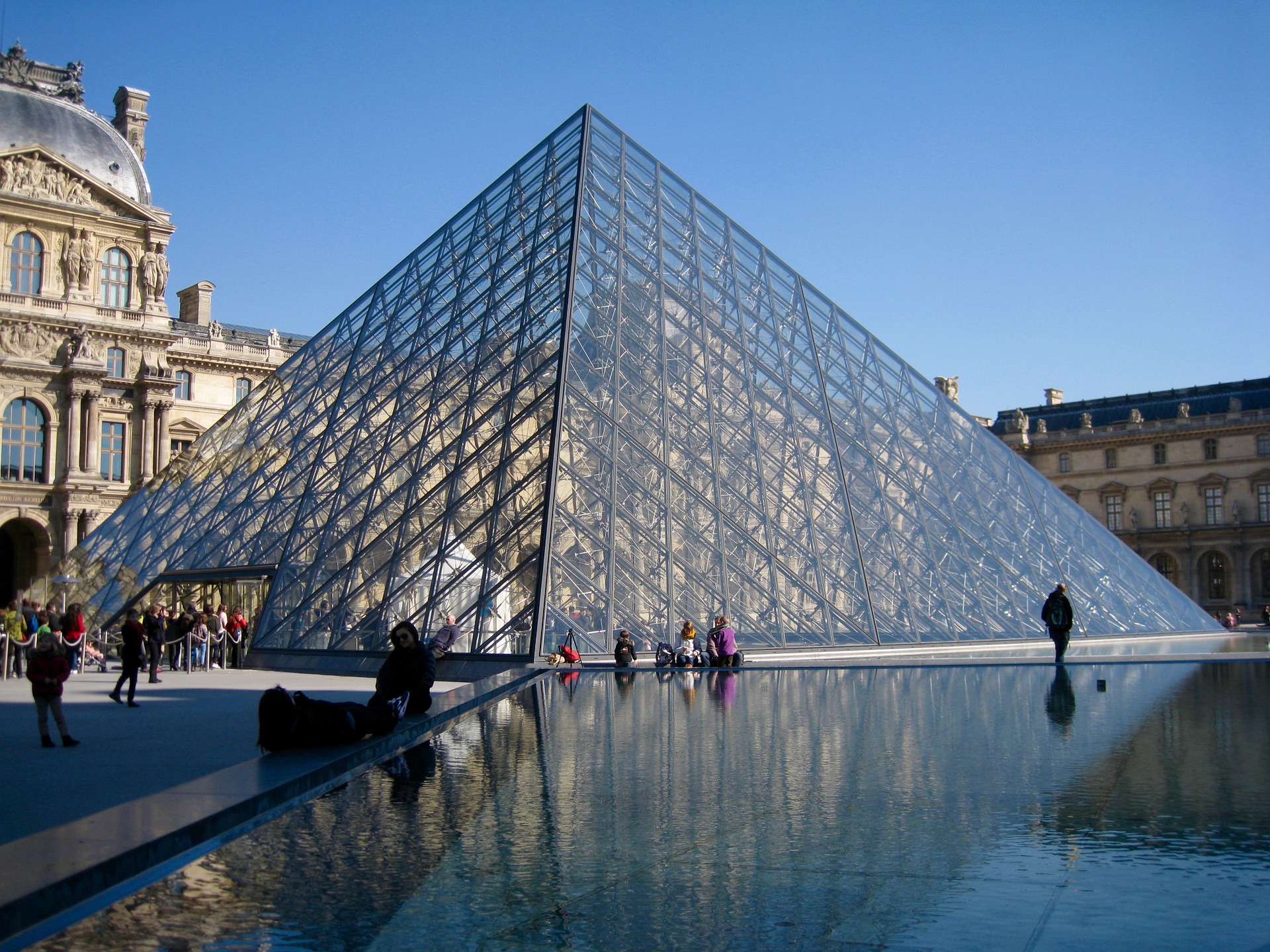 See the Louvre with Kids

Paris is overwhelming. That’s just the reality. There are so many art museums in Paris, attractions (the Eiffel Tower! The Catacombs! Notre Dame!), cafés, parks, and other famous spots, that you simply can’t see them all.

In addition to the ridiculous abundance of Paris attractions, you have to deal with the fact that about a million other people want to see them at the same time as you. (That number is approximated.)

As we travel through Europe this year, one of our goals is to travel deeply. We want to spend more time in fewer places for a richer understanding. That doesn’t mean we don’t succumb to FOMO (fear of missing out), especially me and Anders, but we try to travel slowly.

We wanted a different experience of the Louvre in Paris (Musée du Louvre) than the usual rushing from Egyptian artifact to Roman sculpture to the Mona Lisa. The Louvre is the largest art museum in the world and sees 10 million visitors every year!

Their Louvre family tour was just what we need to have a deeper experience with Paris art, in fact, the Louvre tour turned out to be a highlight of our ten days in Paris and should be part of any Paris itinerary.

If you plan to visit several museums you might want to consider whether it is worth getting the Paris Museum Pass. 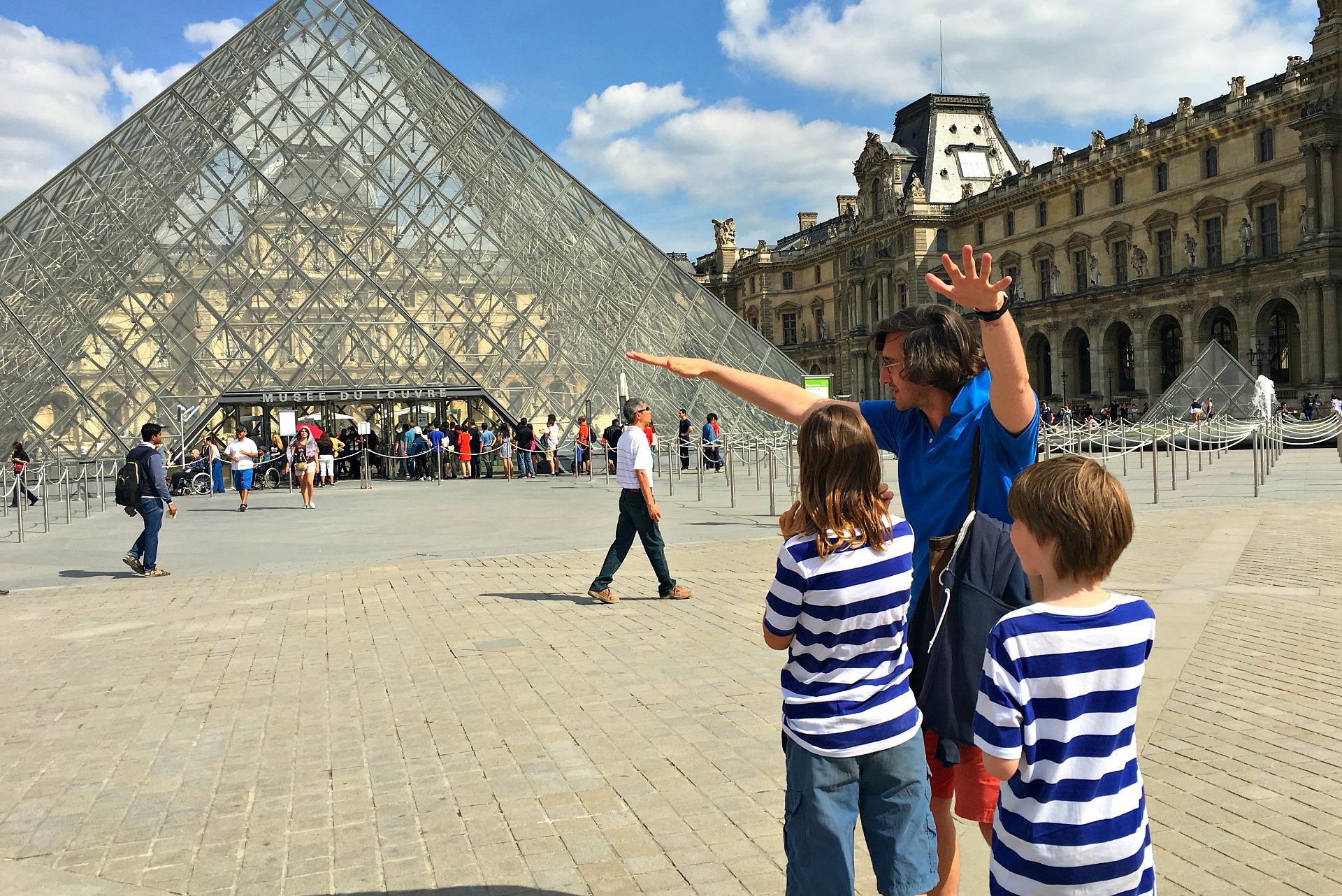 The Best Way to See the Louvre

At this point you may be asking yourself, “How long to see everything in the Louvre?” We learned that if you went from artwork to artwork, looking at every single holding (more than 73,000 m² of works), it would take 13 days – 24 hours each. That means no sleeping, eating, or bathroom breaks. Around 35,000 works of art are exhibited, while some are in storage, but that doesn’t narrow it down much. Seeing it all wasn’t going to work for us, we wanted one of Context Travel’s guided tours of the Louvre Museum.

Context Travel gets the best guides to lead their Paris walking tours. They are historians, architects, chefs, and a variety of other experts. Our guide, Pablo, teaches at the Sorbonne when he isn’t doing a kids’ tour at museums in Paris.

Another benefit is that we got skip the line Louvre tickets and the Louvre ticket price was included with the tour. And because their guides are all local, they knew the Louvre hours that were least crowded (Wednesday evening because the museum stays open late). It was one of the few experiences we had in Paris that wasn’t crazy-crowded. 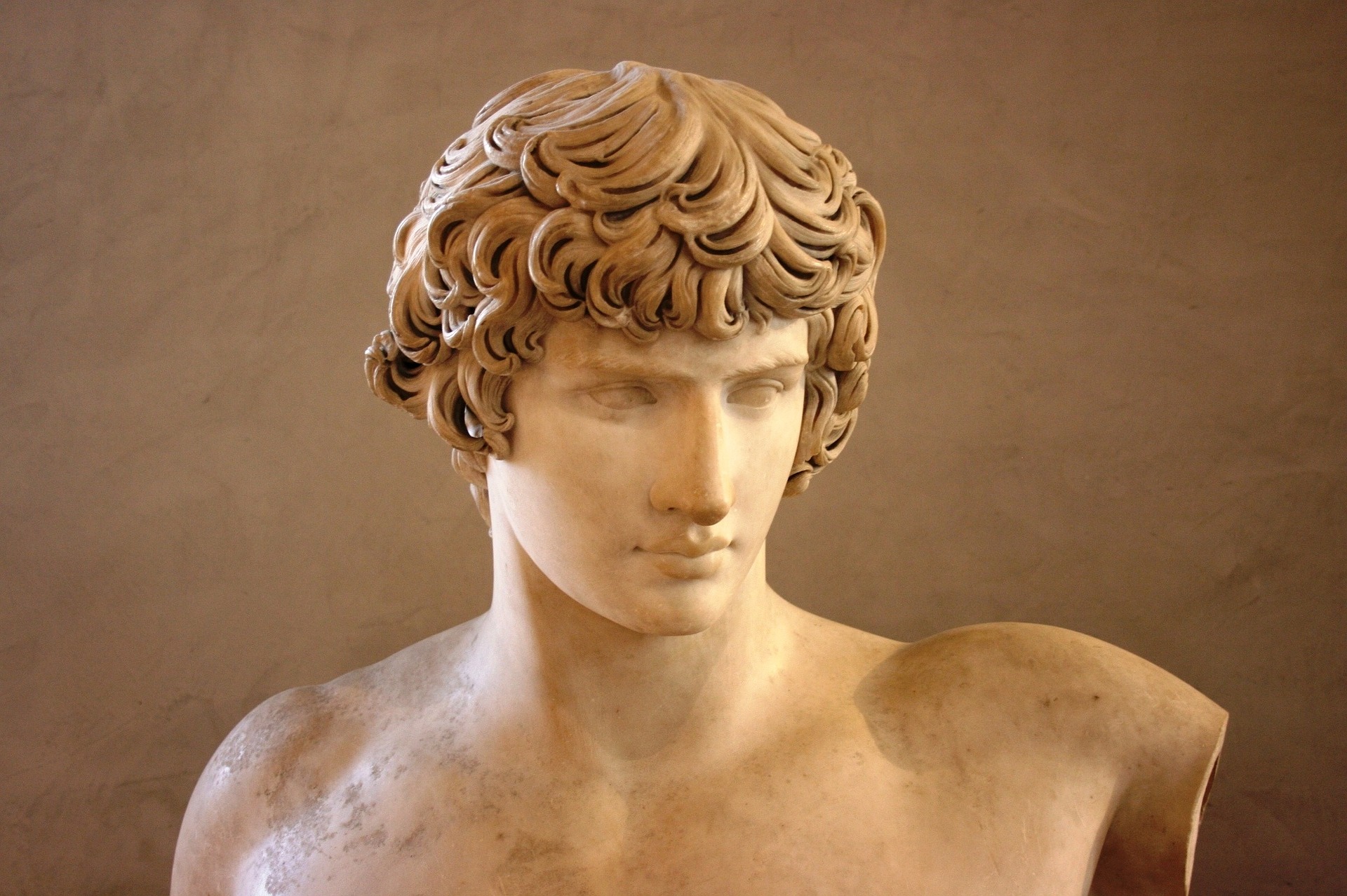 We met Pablo in front of a café near the Louvre and right away he drew the kids in. Finn was not especially excited about another art museum in Paris, but the minute Pablo started talking, Finn was engaged. We all were. In addition to Henry, Anders, Finn, and me, we had my friend Christine with us, so the adults outnumbered the kids. It was a Louvre children’s tour that interested all of us.

Pablo told us that we weren’t going to “see” the art; we were going to “read” the art. The kids loved the stories behind what we were seeing. It was great having a private tour guide to shepherd us around explaining the meaning and history behind the art and architecture.

We started at the Louvre entrance—you know the giant, glass pyramid designed by I.M. Pei—and by the time we were inside, we were versed on the palace that houses the museum, Napoleon, modern architecture, and the French psyche. A museum tour guide is the way to go.

As we continued through the museum, we learned about the original fortress that stood there and saw its bricks. Our private tour guide, Pablo, pointed out inscriptions in the stone bricks and linked them to the free masons who carved them. I had no idea that the Freemasons of conspiracy theory fame were really just freelance masons or brick builders.

Then, he handed out notebooks to the kids and had them do some sketching. I love that this tour was interactive for the boys. The more ways you learn things, the deeper it sticks.

There are probably a lot of tours in Paris France in English and this was no exception. I wish we could have taken a French speaking tour, but then we wouldn’t have understood more than a few words. C’est la vie.

Pablo curated the Louvre artwork for us so we didn’t feel obligated to see everything. And he put it into context, which makes sense given the name of the tour company. We saw all the highlights of the Louvre, of course (the Venus de Milo, Mona Lisa, etc.), but we “read” so much more. From now on, I want an art museum tour guide every time. 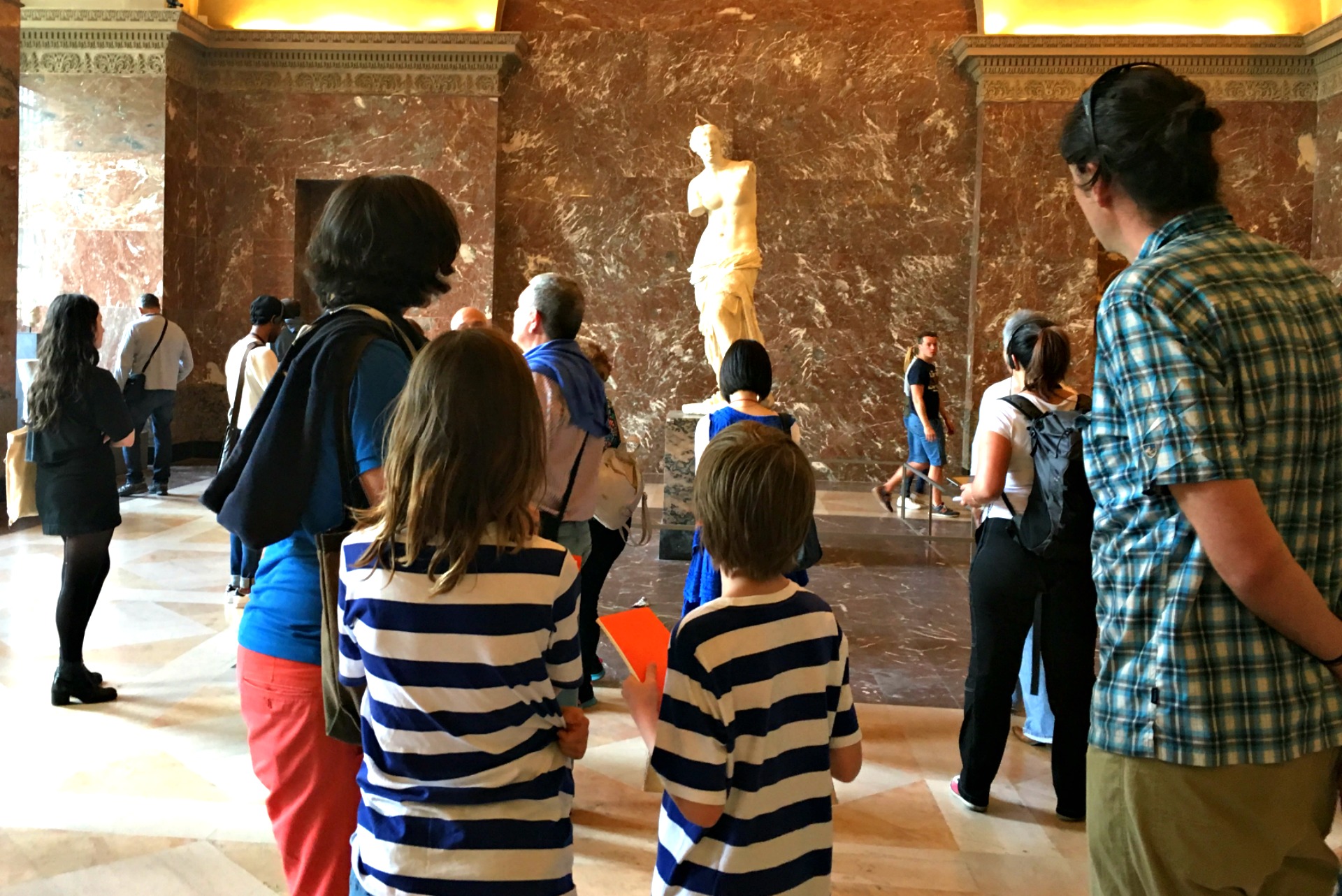 As I said, visiting the Louvre, Paris, was a highlight of our trip. The lowlight was having Henry’s wallet stolen on the Metro, but I digress.

Context Travel Paris deepened our experience, taught us something (a lot of things), and was just what I was looking for from a family travel experience. The Louvre evening tour helped me get over my FOMO and focus.

See some other tours in and around Paris.

Context Tours Paris does a lot of other English tours in Paris and Paris excursions outside the city, including the Palace at Versailles, Monet’s Giverny, and the Normandy beaches.

Since they never take more than six people in a group, they are all unique tours.

I would have liked to take all their Paris private tours. Since they do tours all over the world, maybe we will hook up with them again. 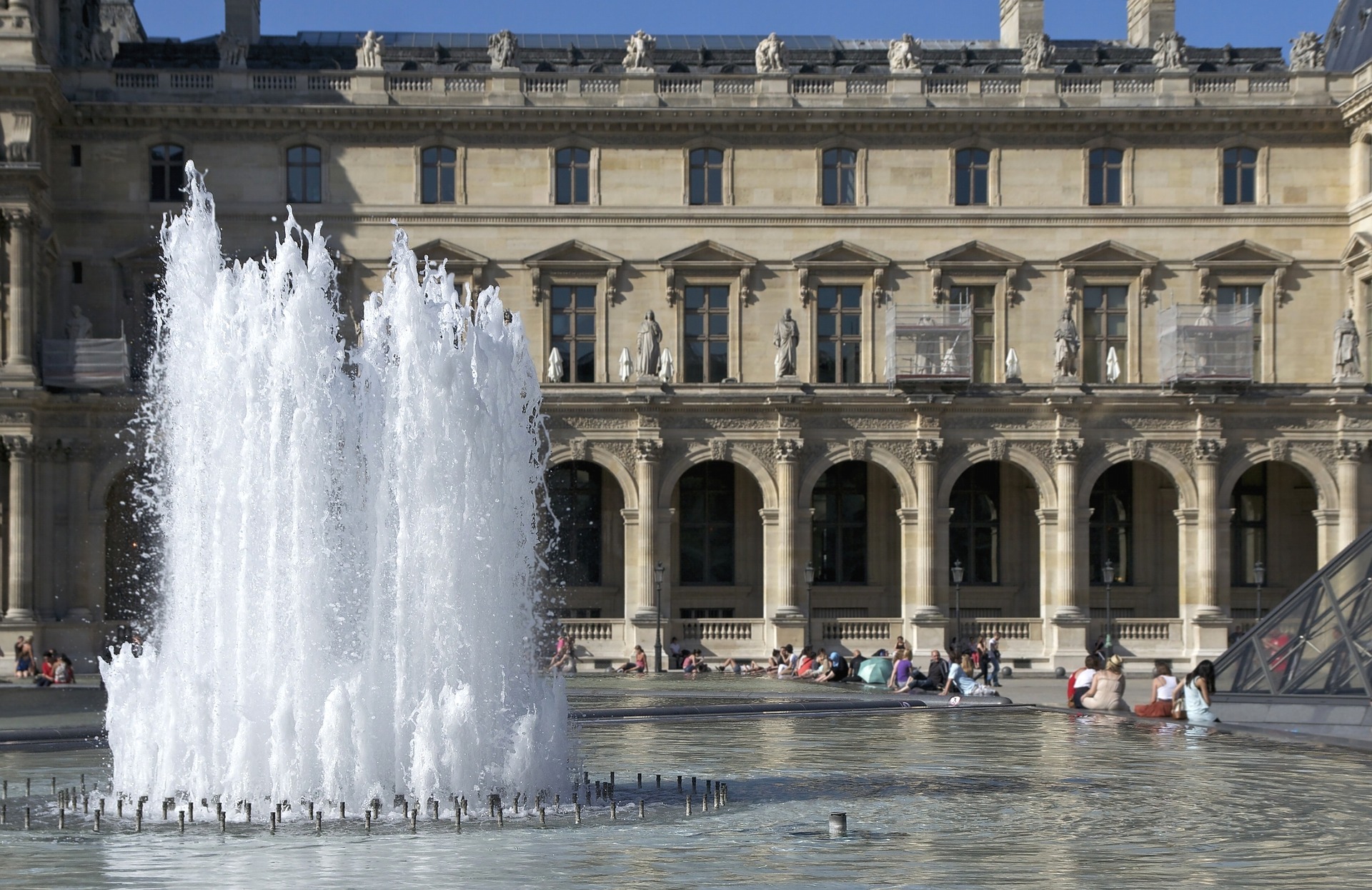 Visiting the Louvre With Kids

My number one recommendation is to go to Context Travel’s website and sign up for a tour. (We took the Louvre for Kids tour.) Let them take it from there. Our tour lasted almost three hours, but it went by in a flash. And we got so much more out of our visit than we would have if self-guided or in a large group.

If you must do it on your own:

When: The museum is open every day from 9am to 6pm except Tuesdays. (Closed Tuesdays)

The museum is open at noon until 9.45 pm on Wednesdays and Fridays.

By car : an underground car park is accessible by the avenue of General Lemonier, daily from 7 am to 11 pm.

From Orly Airport : RER C direction Champs de Mars-Eiffel Tower, get off at Saint-Michel Notre-Dame, walk to Saint Michel, take bus 27 direction Saint Lazare, get off at Musée du Louvre, opposite of the Pyramid.

Additional Louvre information: Like everything in Paris, the Louvre takes security seriously. They won’t allow you to bring big bags or luggage into the museum that exceed 55cm x 35cm x 20cm.  All smaller bags must be places in one of their (free) lockers. Be prepared to go through security checkpoints upon entry. 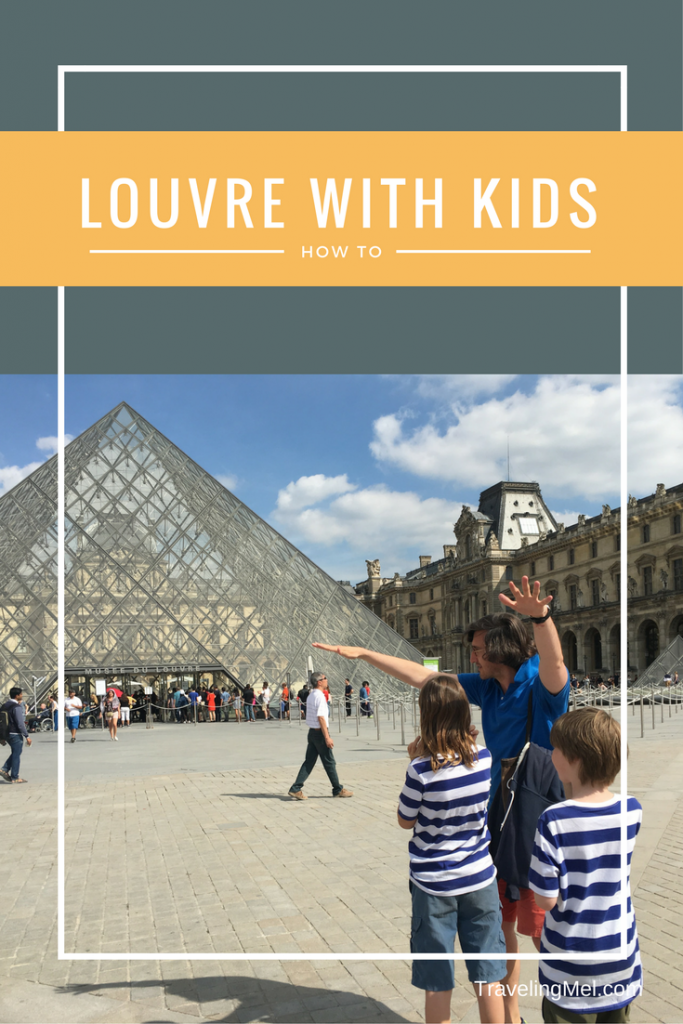 20 thoughts on “The Best Way to See the Louvre, Paris”