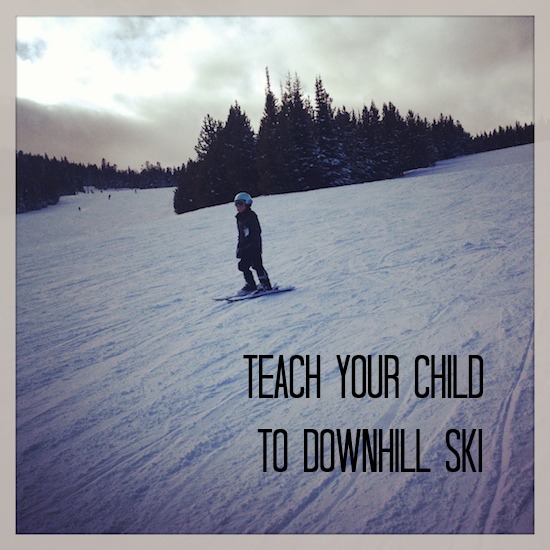 Its the time of year when many Bozemanites are either schussing through fresh powder, or dreaming about it. With several great ski resorts within an hour of the Gallatin Valley, its hard not to at least give skiing a try. If you want to bring your little ones along, theyre going to need to learn to love skiing, too.

Jill Imsand, Big Sky Resort ski instructor and childrens ed chair for the Northern Rocky Mountain Division of Professional Ski Instructors of America, said kids can start skiing as early as two, but its more about them being comfortable when its cold and sliding around than actually skiing. By the age of four, many children will be ready to hit the bunny slopes.

 Make it fun and keep your expectations low. All children develop at a different rate. Like crawling and talking, your child will be ready to ski at a different age then your friends kids.
 Try on equipment at home. Not only do you want to be sure everything fits properly, but it adds a little familiarity to a new experience on the snow. Practice getting in and out of skis.
 The most important thing you can do is get your brood out into the snow for short (maybe twenty to forty minute) excursions where they can learn to be comfortable, have fun and gain experience in the snow.

Andrea Gambaro-Gunn, of Livingston, Montana, taught her sons Liam and Quinn to ski when they were three and two and a half. We would carry them up a little hill and then run down to catch them. It was a serious workout for us. After the boys had mastered the neighborhood hill, they moved onto the bunny slope at Bridger Bowl.

 To get children used to riding the chairlift, ask the liftie to slow it down for loading and unloading. (Plan on lifting your child onto the seatthe chairlift may be too high for them to sit on alone.)
 Start without poles, they just get in the way.
 Gambaro-Gunn used a harness specifically made for skiing with her little ones. Her boys skied in front of her and they got used to traversing across the hill while I turned their bodies.
 Next, Gambaro-Gunn slapped on an Edgie Wedgie, which holds the skis together in a snowplow position. From there, I just held their hand until they could ski on their own.
 Other techniques parents use include skiing backwards while holding their childs hands and letting the child ski between their legs.

The hardest part about teaching kids to ski is getting past that fearlessness they seem to possess. Quinn just wanted to go as fast as possible, laughed Gambaro-Gunn. So let the kids have a blast for a couple years, then introduce poles and work on form.

As for gear, Imsand suggested buying used or renting. Many shops rent kid-sized apparatuses for a season, which saves on expensive gear that wont fit for long. Some places even rent helmets. Be sure to get equipment that fits, said Imsand, buying too big, hinders kids ability, and a too-large helmet wont protect your childs noggin. 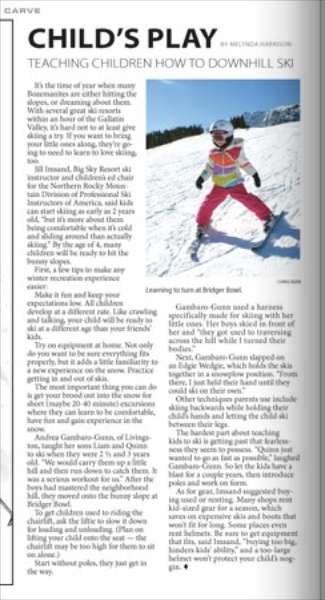