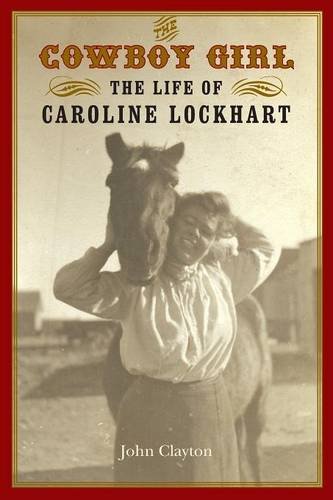 There is nothing new about romanticizing the Old West. Even as the days of get along little doggies were beginning to wane, writers and artists were longing for years gone by.

Caroline Lockhart was one of those writers, who, in the early part of the last century wrote tales of the Wild West, even when what she wrote was at least partly fictionalized. In John Claytons thoroughly researched book The Cowboy Girl: The Life of Caroline Lockhart (University of Nebraska Press), he explores the life of one of the Wests greatest proponents, journalists, novelists and storytellers.

Lockhart primarily grew up in the east, but longed for a life on horseback in the West. In order to find adventures as well as support herself, she began her journalism career as a stunt-girl reporter in the same vein as her better known contemporary, Nellie Bly.

At a time when women rarely traveled alone, and even more rarely traveled to the rough and rambunctious area west of the Missouri River, Lockhart went west seeking stories and adventures. She scaled shale cliffs in Glacier National Park and made friends with folks with names such as Sourdough Sam.

Caroline Lockhart had arrived in the West, Clayton writes of Lockharts journey to Glacier, It may have been crumbling away beneath her, but she was determined to hold on.

Eventually Lockhart settled in Cody, Wyoming where she worked as a newspaper publisher and rode her horse the four blocks to work each day. There she founded Codys Stampede Rodeo, still an important event today. Later she moved to the Crow Reservation where she lived out the remainder of her days.

While many women of the west have been written about by feminists and others, Clayton believes that Lockharts story has faded from communal memory because many sought stories of oppression: women dragged west against their will, enslaved by their husbands adventuring spirits. Lockhart did not fit.

Lockhart was a woman before her timea women seeking adventure and one who made a life she dreamed for herself.

What is it about the image of open range, gun fights and cattle drives that still moves us today? Claytons story of Lockharts long life is as much about answering this question as it is a story of a unique womans life.