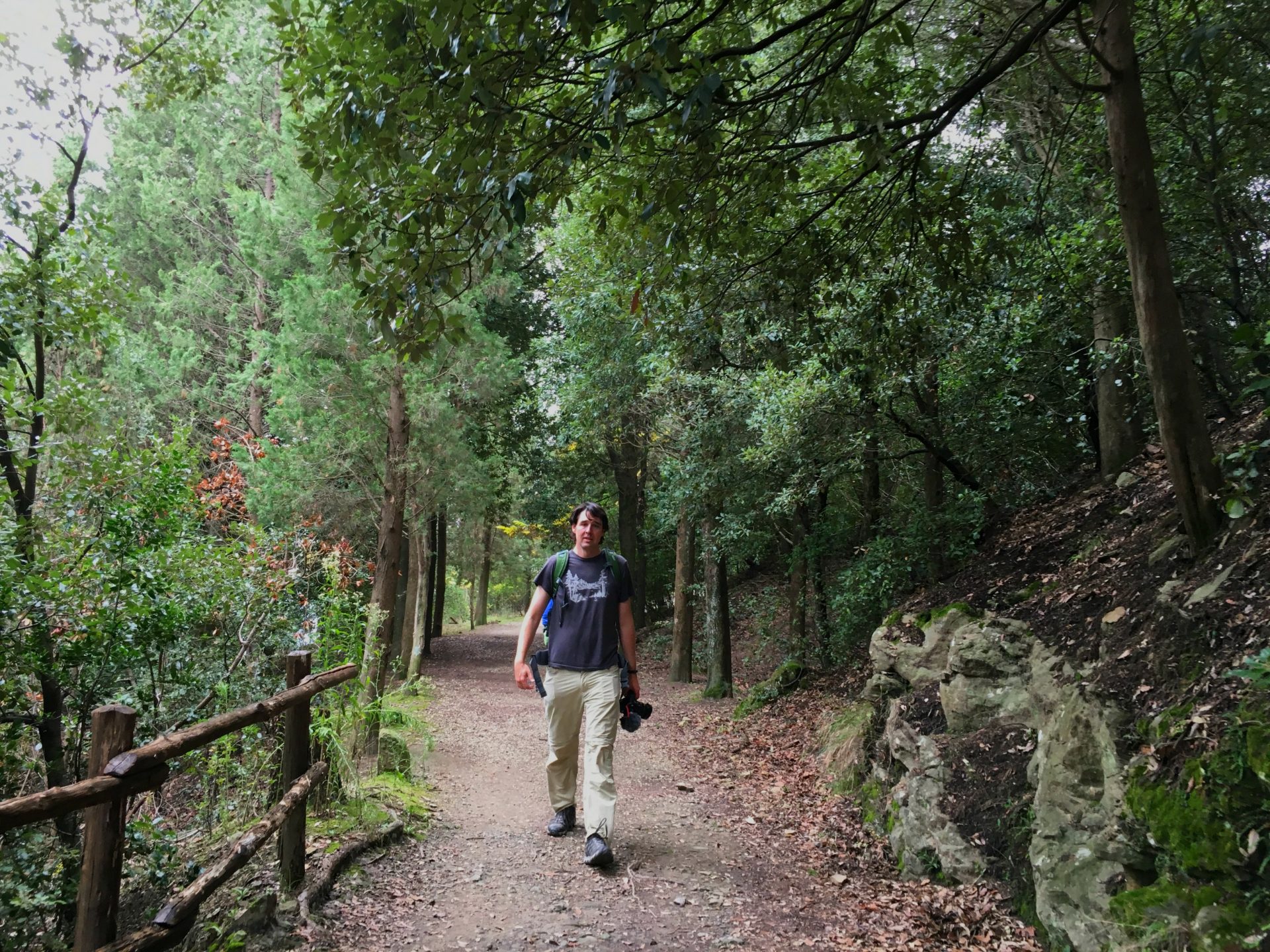 This week we took a day hike near Florence along the Stonemasons and Leonardo Trail—part of the Renaissance Ring (Anello del Rinascimento). The Renaissance Ring is a trail that circles Florence. It wanders through the countryside– in natural areas, past points of historical interest, along the Old Florence Road, and among art. It’s not really what I would call a “hike,” but more of a trek or walkabout.

We walked a small 2.5 km loop starting and ending in Fiesole. This little town uphill from Firenze (Florence) has long been a getaway for royal and powerful families. Just like us. Wandering around Fiesole is interesting enough in itself, but we wanted to learn more about the stonemasons and Leonardo da Vinci, as well as cover some terrain on foot.

More about other things to do in Fiesole, Italy, at the bottom of the post.

I had been reading books set in Italy, including a A Room With a View, which takes place partly in Fiesole, so it was neat to visit in person.

If you don’t have a month to spend in Florence, like we did, take a step back into the Renaissance on this Florence vacation with Great Values Vacations. 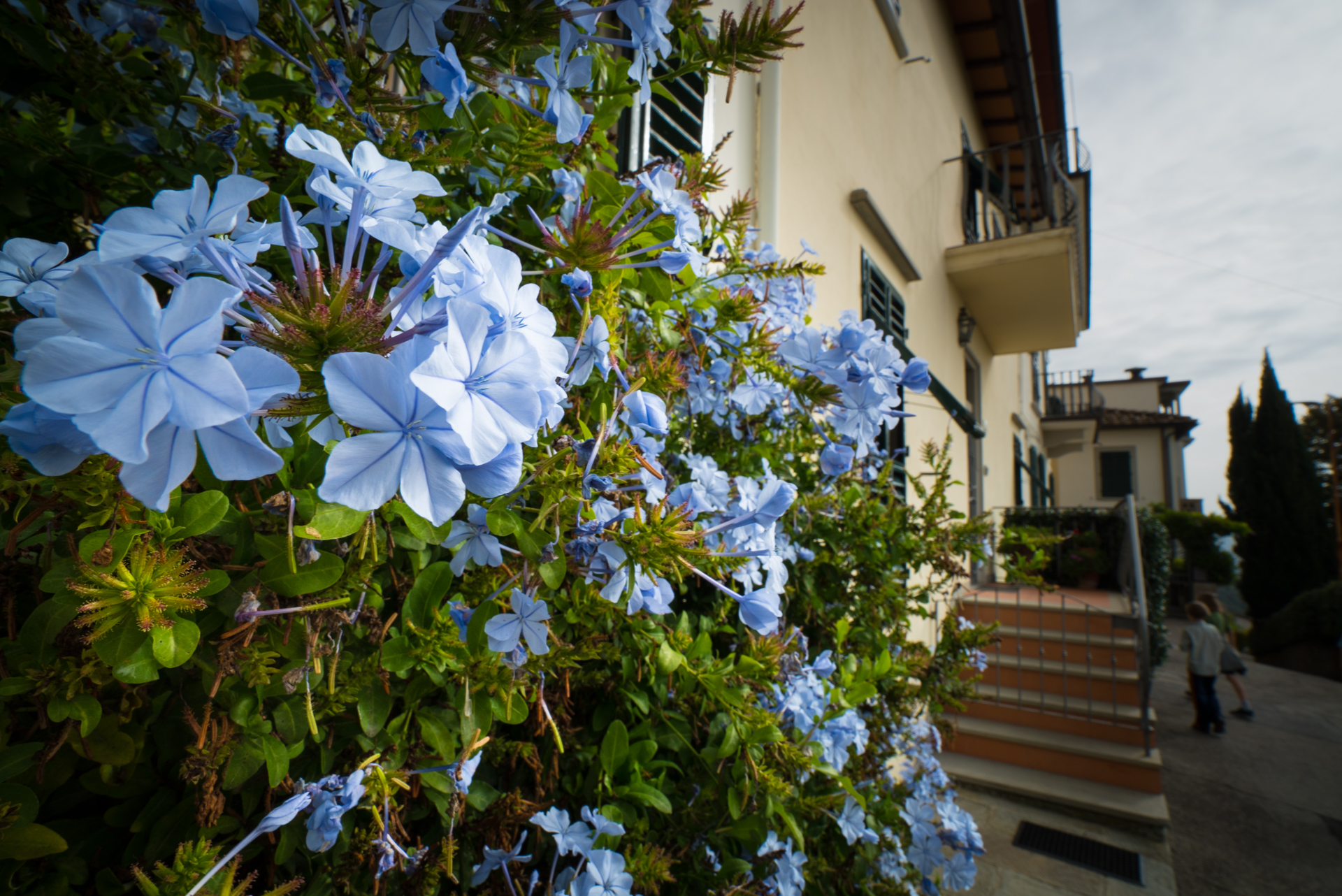 The trail left from the Piazza Mino da Fiesole just past the bus stop. (If you are looking at the statue, go up and to the right.) We walked along narrow streets lined with mustard, peach, and beige houses, past a public garden, and to a panoramic lookout over Firenze. This is an active road, so watch for cars! 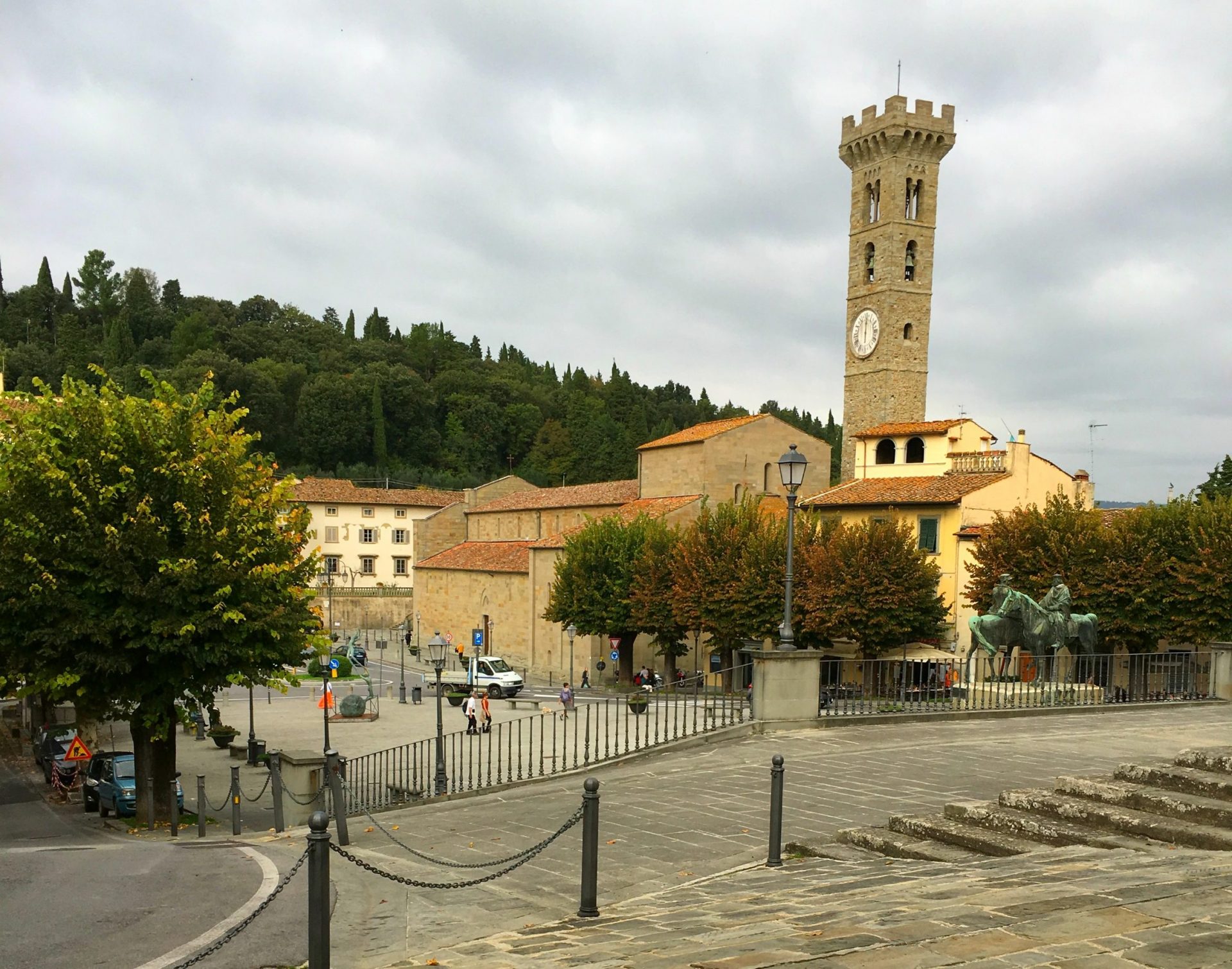 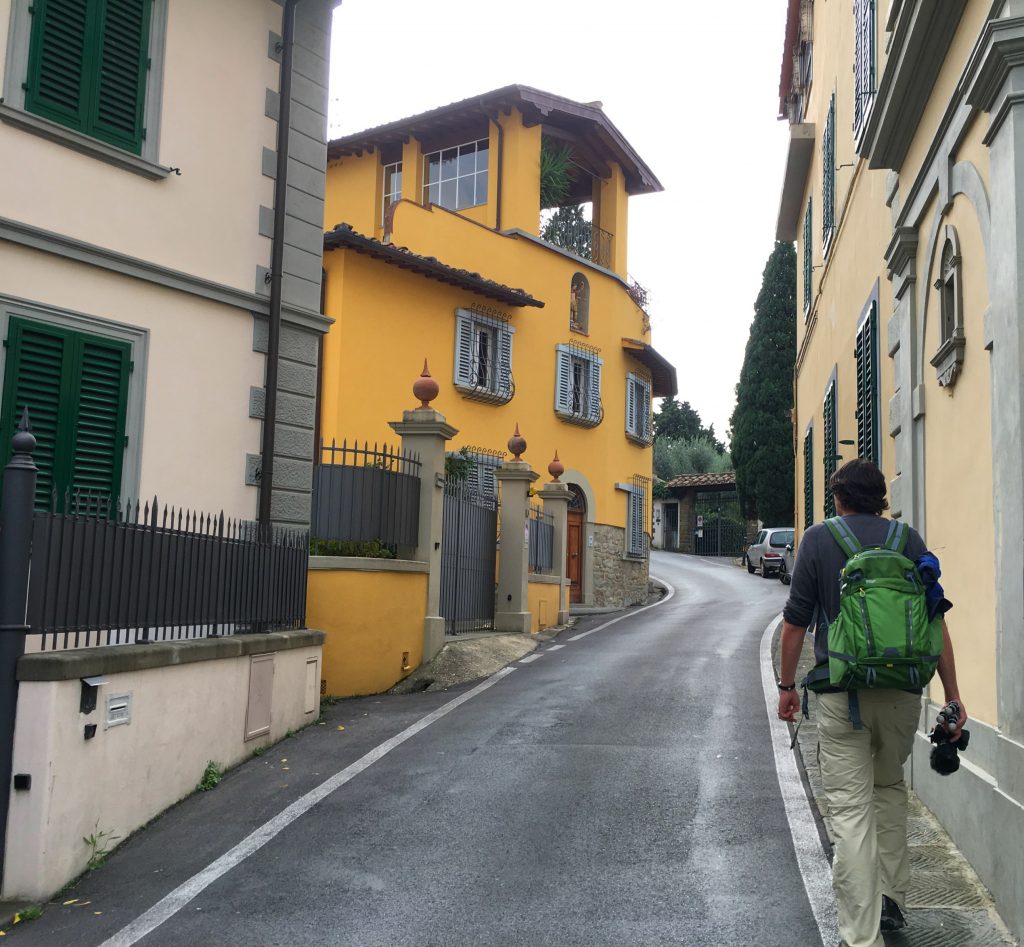 This day hike near Florence, like other parts of the Renaissance Ring, keeps the Duomo as its central viewpoint. It was pretty cool seeing the whole city from above and it gave us a better perspective of where we had been the last week and a half. Since the buildings are so tall and streets so narrow in Florence, it’s hard to get your bearings down there.

The trail soon left the streets and entered a more natural area. We had several more views of the city while climbing through cypress, olive, and oak trees to Mount Ceceri. 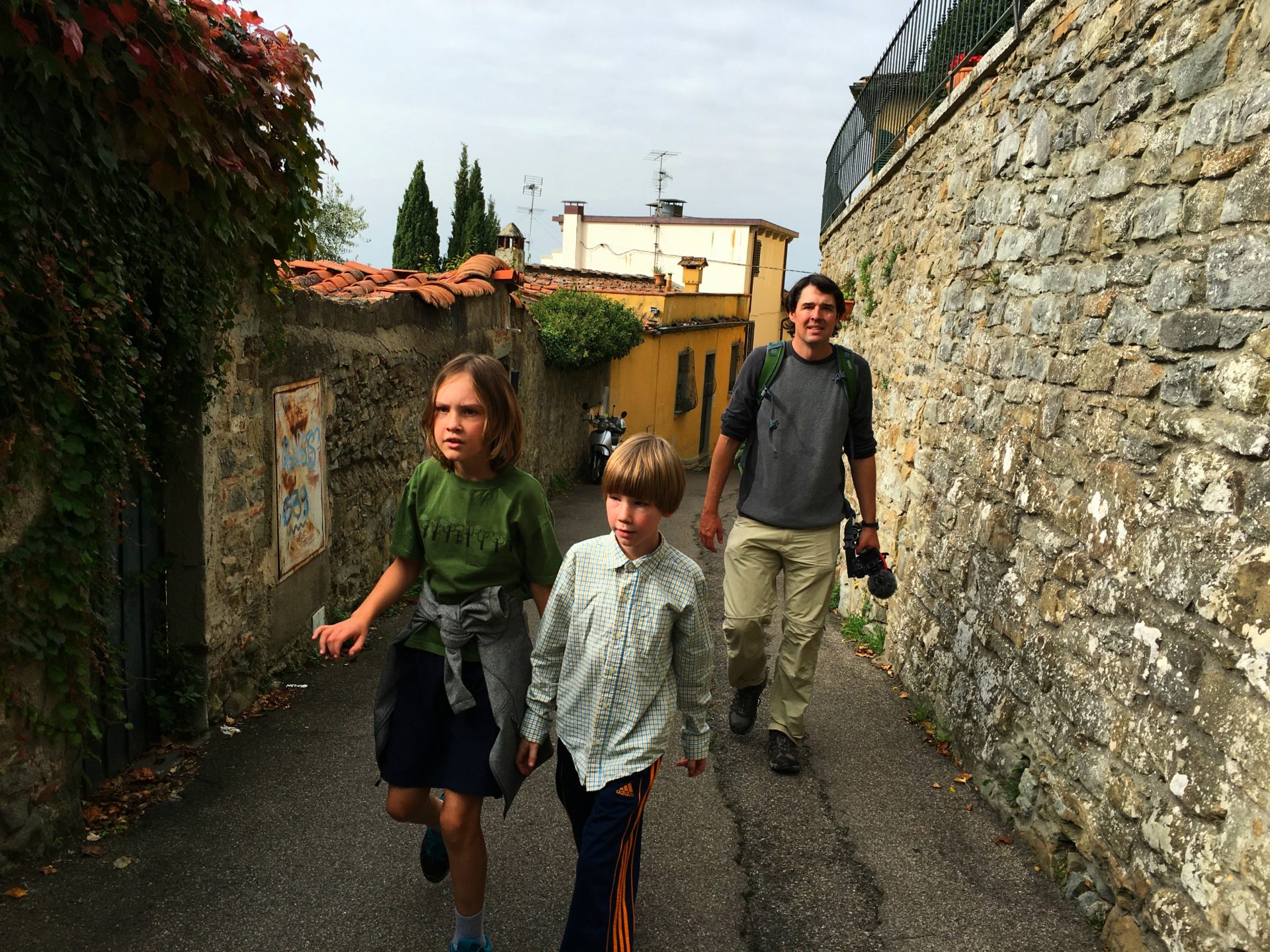 We kept seeing signs along the way pointing to “cavas.” I imagined the limestone-like rock (pietra serena) was riddled with caves. It made sense since caves are often found in limestone and its metamorphosed cousin, marble. When we stopped for lunch just below Piazzale Leonardo da Vinci on Mount Ceceri, I found a sign explaining that the area is filled with quarries, not caves. Should have used my translator.

For my geo-phile friends: “Pietra serena is a gray sandstone used extensively in Renaissance Florence for architectural details. It is also known as Macigno stone. The material obtained at Fiesole is considered the best.” So says, Wikipedia. “Examples of its use in Florence include the interior pilasters, entablatures, and other decorative elements of Brunelleschi’s Pazzi Chapel and Michelangelo’s Medici Chapel.” 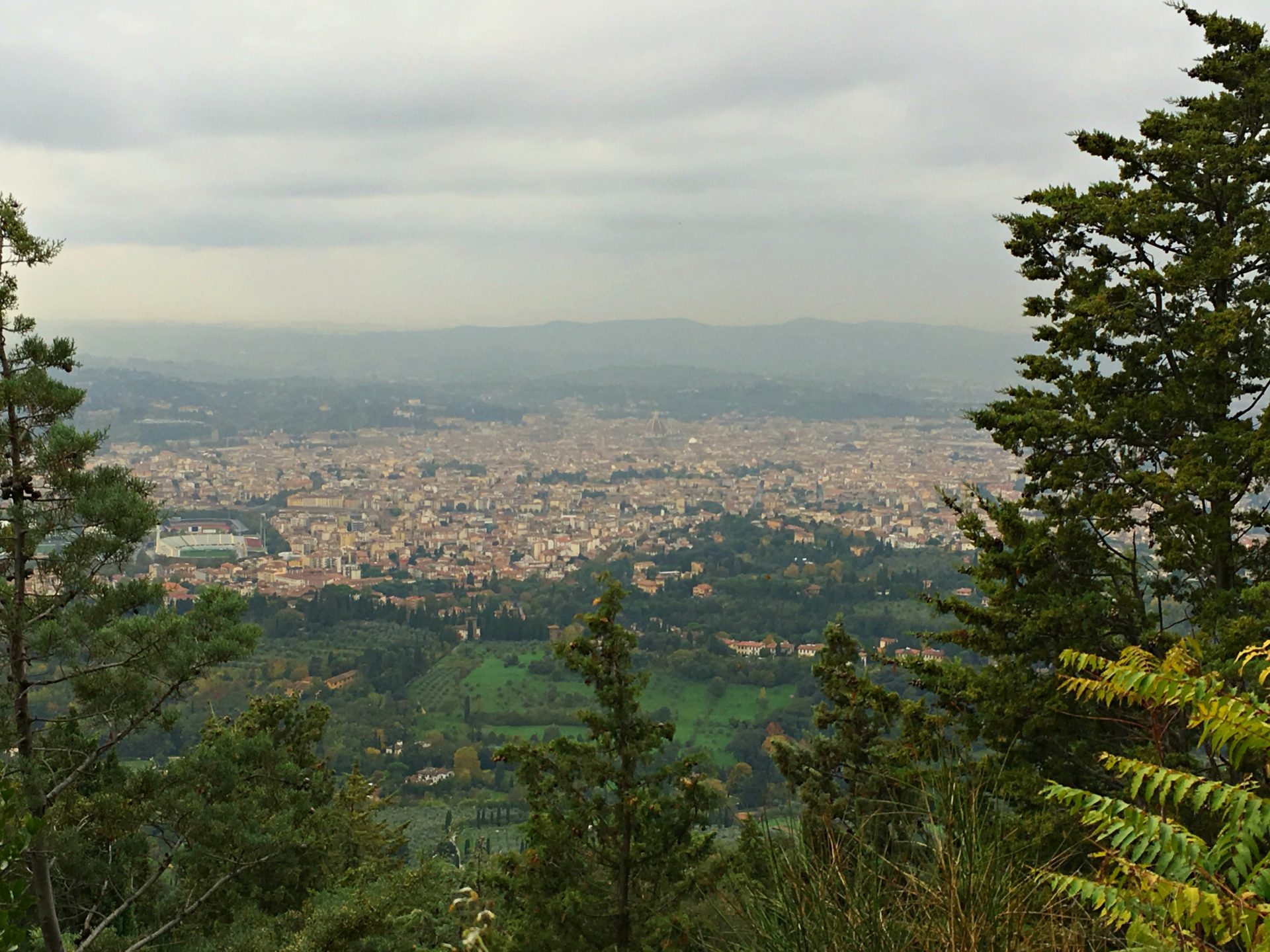 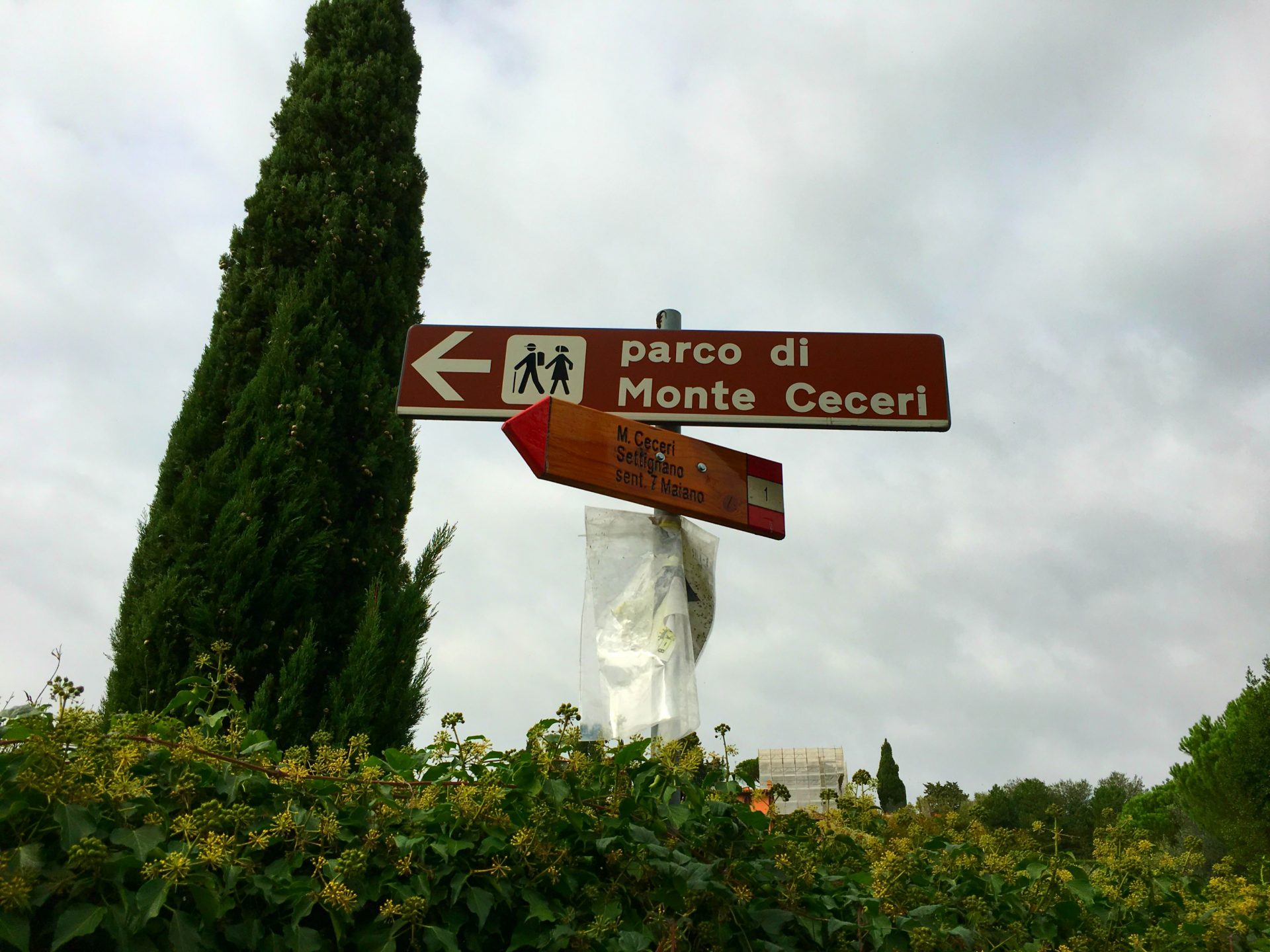 The other really cool thing about this area, besides another breathtaking view of Firenze, is that it is the area where Leonardo da Vinci had an olive grove and did his human-powered flying experiments. We could imagine how in 1505, Leonardo strapped wings to the back of his poor volunteer. The assistant then leapt off the hill. He suffered a few broken bones, but was ultimately ok. 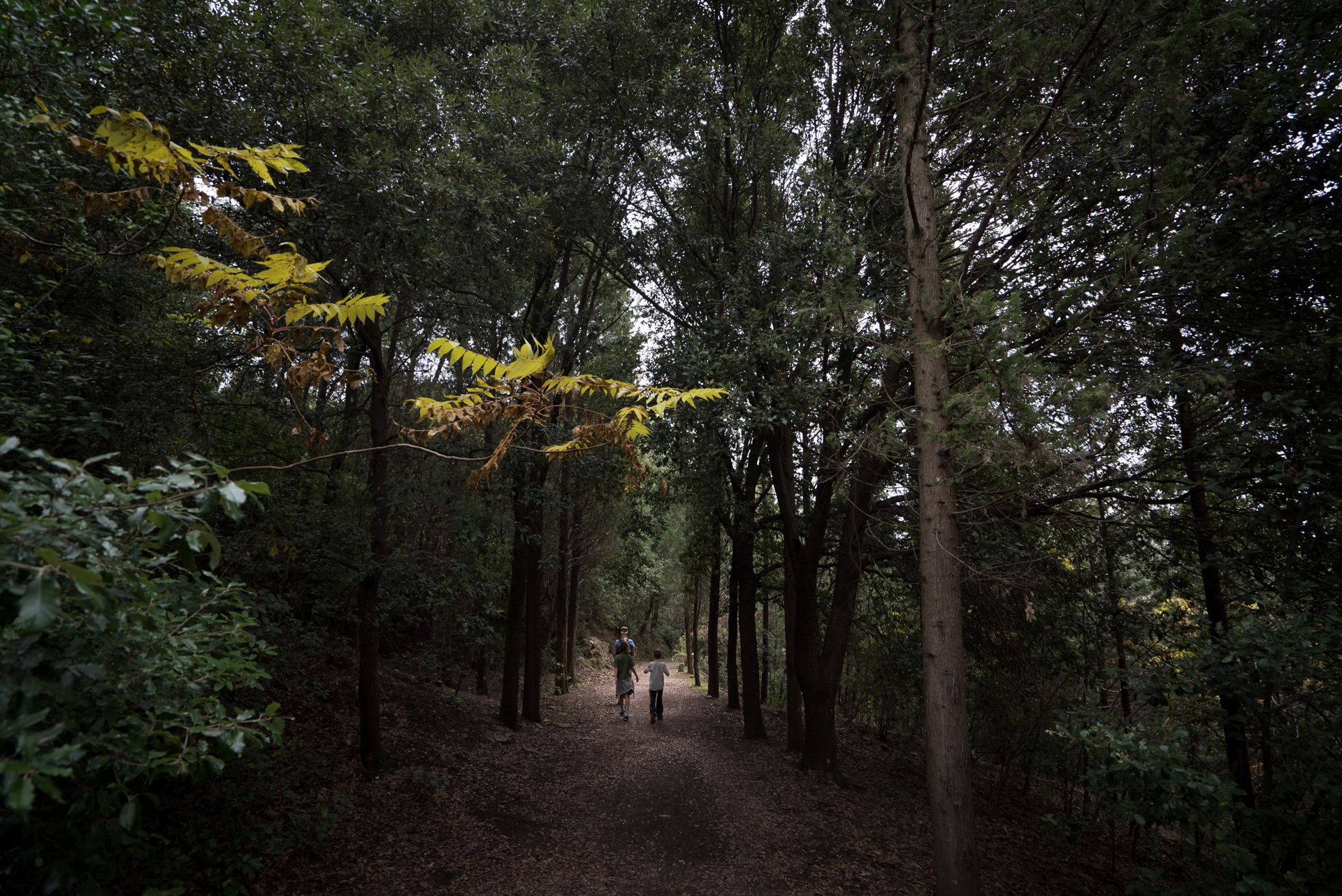 As unschool-homeschool-worldschool-students-of-life, we are always trying to get up close to history. Firesole and the surrounding area is proving to be an excellent place to do this. No surprise!

From Monte Ceceri we walked up to the Piazzale Leonardo da Vinci, an uninspiring, flat area covered in gravel. Best to have your lunch at the picnic table below. There is a small monument and a great view.

Then it was more trail time, with old, stone walls marking one side of the trail. We passed a few olive groves and were back on the winding streets to Fiesole.

The bus ride down the hill was pretty fun and a little faster than I would have driven, but it was a great way to see more. 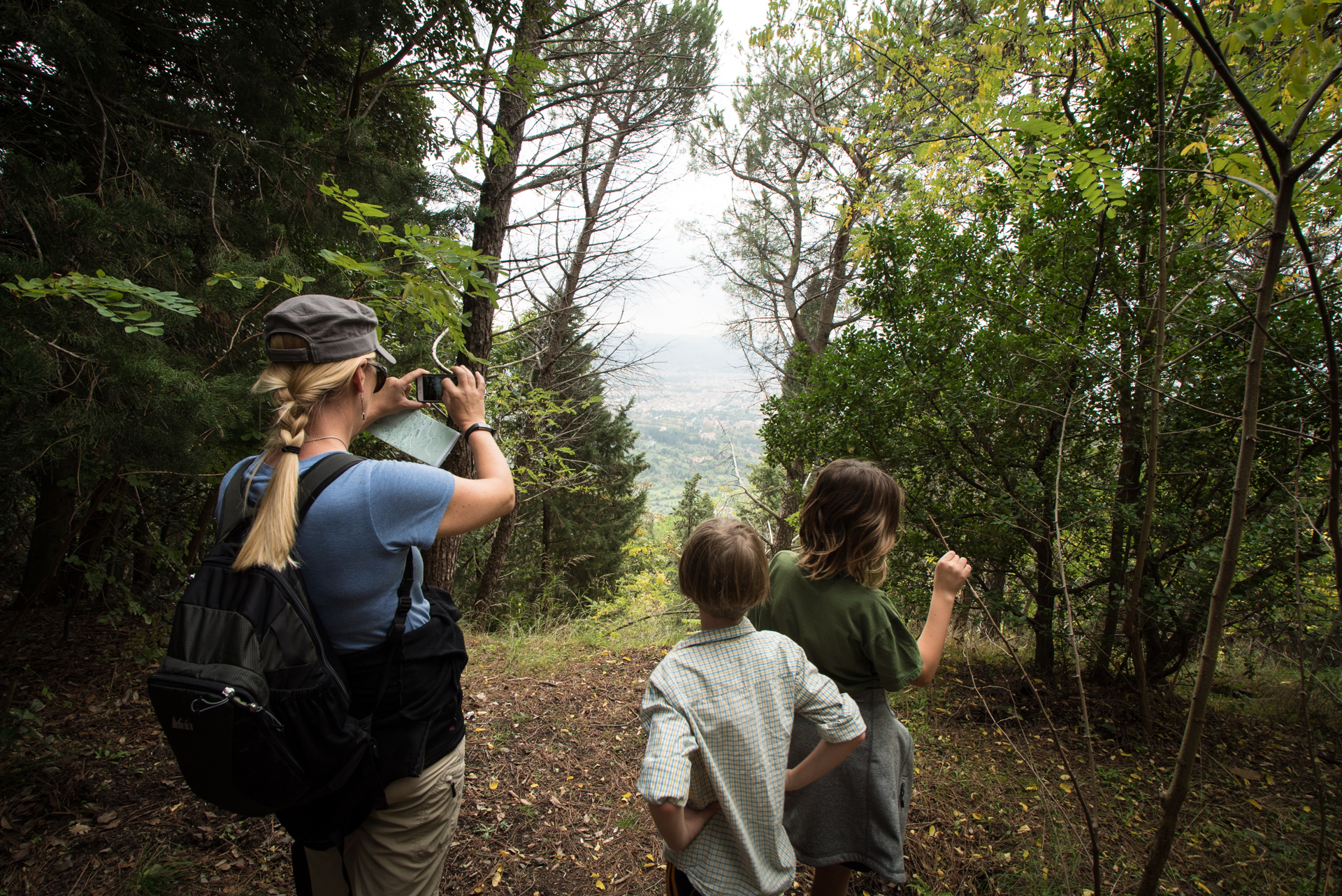 Plan Your Own Trip to Fiesole

What: A 2.5 km day hike near Florence along the Stonemasons and Leonardo Trail—part of the Renaissance Ring (Anello del Rinascimento)—starting and ending in Fiesole.

Why: Take a walk, learn about history, take panoramic photos

How: Make it super easy and stop at the Tourist Center on Via Cavour. They will give you maps, tell you how to get to the bus stop, and answer any other questions you may have. Specifically, we found the Anello del Rinascimento Trekking Map and Fiesole: Mappa del Territorio useful. They were both free.

Getting There: We took the bus, which was quite easy and inexpensive. Bus tickets can be purchased for €1.20/person each way. Buy tickets at any tobacco shop. Take the #7 bus from outside the Giardino dei Semplici (Botanic Gardens) on Via G. La Pira or the SNM Train Station. Get off at Piazza Mino da Fiesole (not at San Domenicio like we did!).

You can buy your tickets for both directions in Firenze or get a ticket back in Fiesole. The tickets are good for 90 minutes if they are stamped. So, if you get off at the wrong stop, just wait for the next bus and continue on.

EDIT Sept 2018: I guess you can’t buy the tickets in a tobacco shop in Fiesole anymore. This from the comments, “You need 5 Euro note or coins to purchase the bus ticket from the vending machine in Fiesole. They don’t sell tickets at the tobacco kiosk there.”  Let me know if you go and have any more information! Buy your tickets for both directions in Florence, just to be safe.

If you prefer to walk to Fiesole from Florence, take  Via Vecchia Fiesolana from San Domenico. It is quite steep but you will see all of the beautiful Renaissance villas in the hillside and glimpses of Florence as you head up. 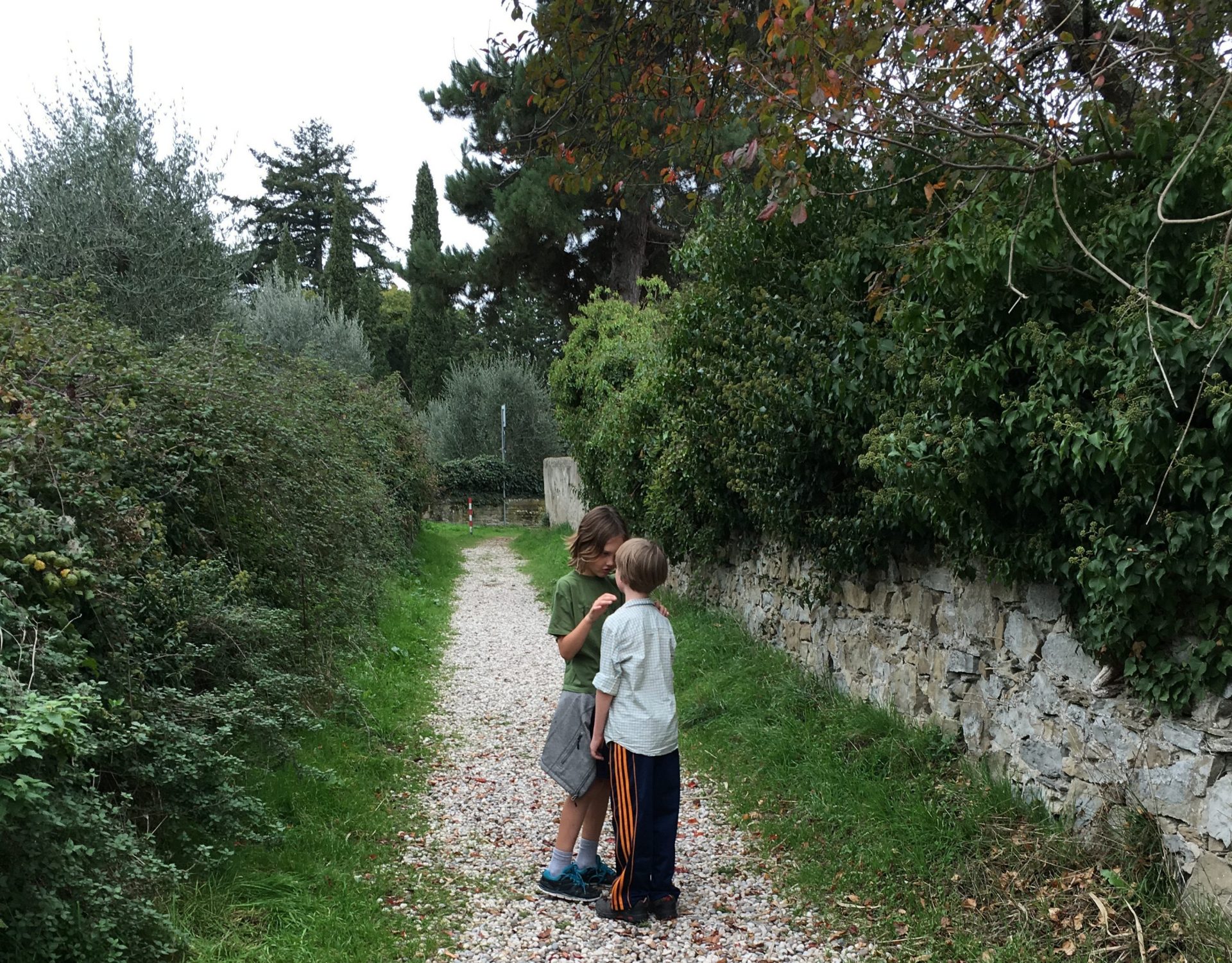 Things To Do in Fiesole, Italy

The walk is my favorite part, but if you are planning a day trip to Fiesole, you can see and do other things as well. In fact, since it is such a small town, you could do all these things and still be back in Florence in time for dinner.

If you show up on a weekend, there will probably be a market in Piazza Mino. Food, drinks, and crafts can be purchased with cash.  There is an antiques market every first Sunday of the month and other markets throughout the year on weekend days.

It’s a steep walk up to the monastery, but you will get the best view of Florence from there. Visit the chapel and free museum, and perhaps a little snack on the bench out front. Head back to town on the path in front of the chapel. It winds through a delightful park on its way to Fiesole.

The Fiesole Bandini Museum houses “paintings dated from the thirteenth to the fifteenth century , the small nucleus of Byzantine works and the terracotta sculptures of the Della Robbia workshop.” It’s a charming, little museum that rivals the Uffizi in content, if not in size.

Museo Bandini is closed on Tuesdays in the winter.

The most impressive part of the Fiesole archaeological area is the amphitheater. This intact Roman theater is still used in the summer for performances. You’ll also find the ruins of Roman baths and a temple thought to be dedicated to Minerva (see the small bronze owl found here in the museum).

Remains of the Etruscan walls that surrounded the area can be found down the street in Via delle Mura Etrusche, near the stadium.

Fiesole’s Civic Archaeology Museum is filled with artifacts from both the Etruscan and Roman periods. The Antiquarian Costantini is a special collection of over 150 pieces of ceramics from ancient Greece and Etruria.

Villa Peyron is located about one kilometer from Fiesole. The beautiful, formal mansion was built on Etruscan ruins and is home to a museum. The monumental garden and  large park of  Villa Peyron Bosco Fontelucente is a showstopper. Make sure to leave time to wander around here. 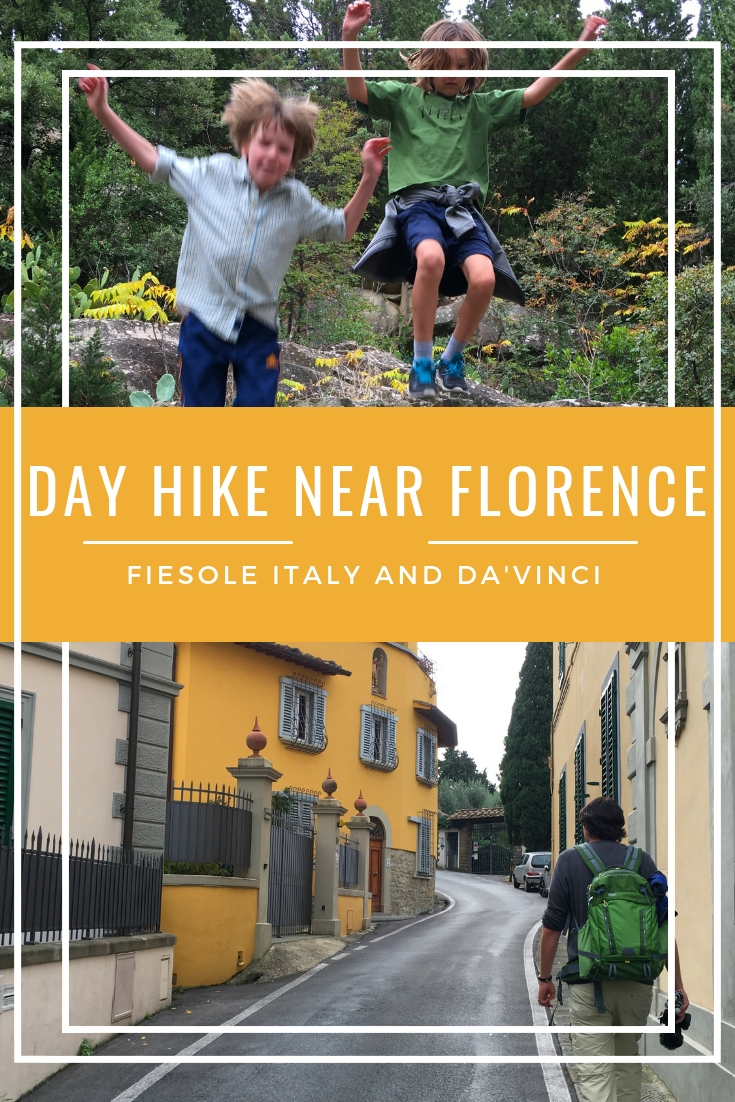