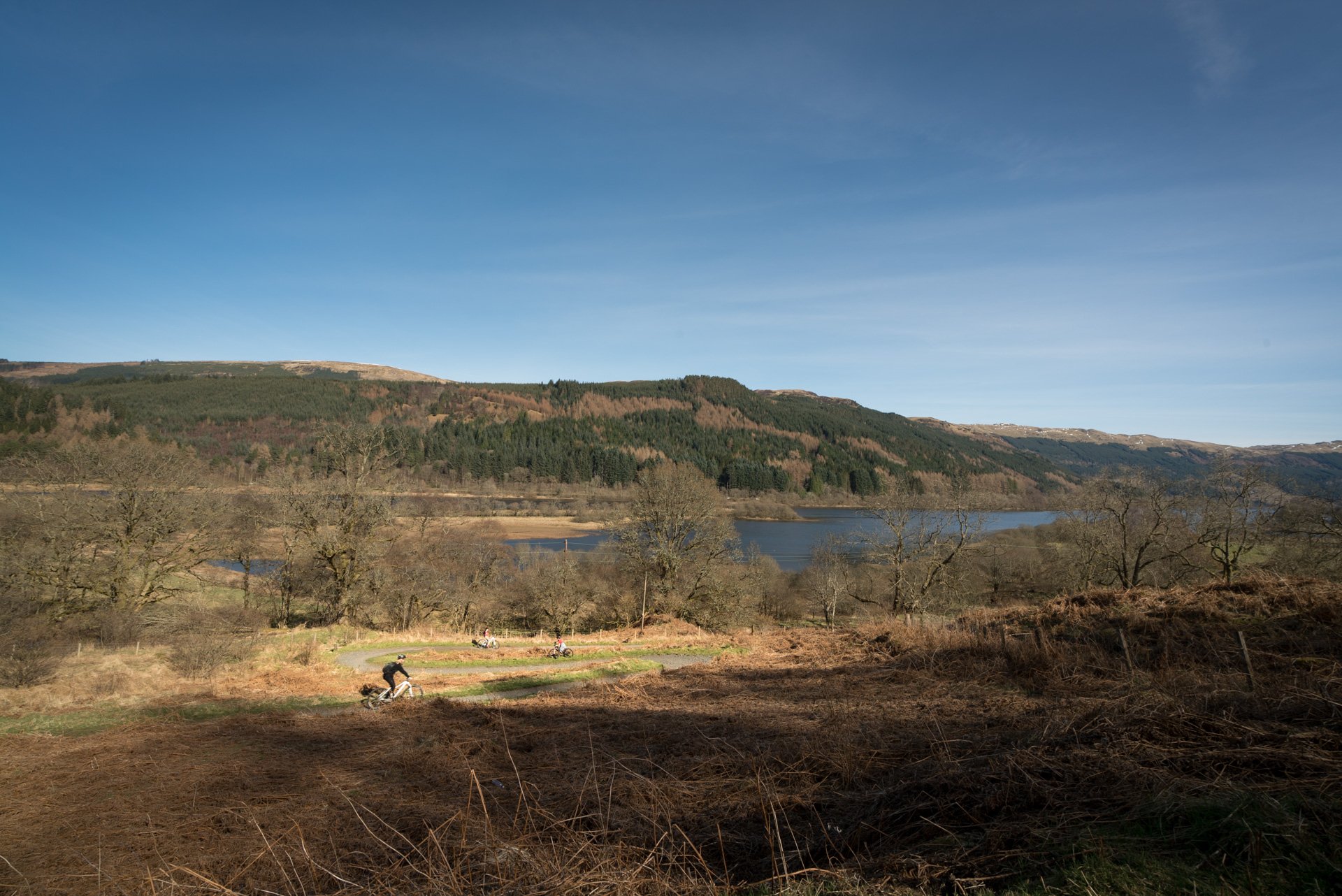 We are normally a family of walkers, but every once in awhile we get off our feet and change things up. We had so much fun on these two family bike rides in England and Scotland. It has us considering a multi-day adventure later this summer.

There are so many places to cycle in the UK. The National Cycle Network is a series of safe, traffic-free paths, and quiet on-road cycling and walking routes that connect to every major town and city. You could get around Great Britain solely on bikes if you wanted to.

We explored parts of the Tarka Trail and Cycle Route 7—both easy family bike rides in England and Scotland. What makes them easy and family-friendly? They are both (mostly) flat, (mostly) traffic-free, have cafés along the way, and don’t require any driving — leave right from the cycle hire shop.

In our effort to follow the tenets of ecotourism, we like to recreate on foot or bike whenever possible, so biking from the shop and spending the day self propelled was perfect.

If you want a bigger adventure, check out this Leh Ladakh bike trip in India. 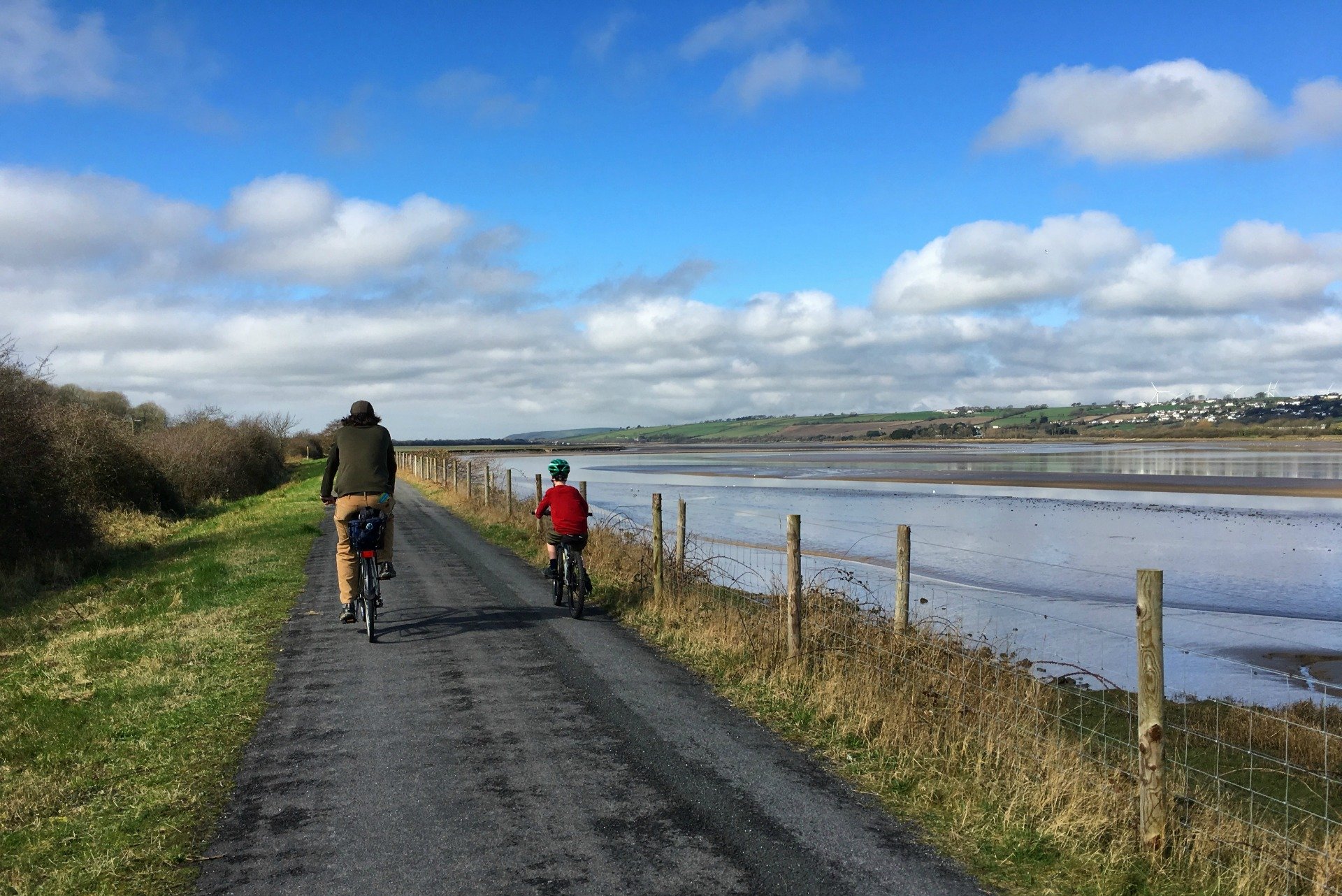 We rode a section of the Tarka Trail when Henry’s dad came out to visit. That means we had riders from eight-years-old to 80-years-old on this ride…and everyone loved it.

The Tarka Trail is a series of footpaths and cycle routes that follow the fictional character Tarka the Otter through northern Devonshire. Henry read the book to the kids while we were in Callander, so the bike ride gave them a little more context for where the story took place. We also walked parts of the Tarka Trail in Callander. This is why we travel with kids — family bonding, exploring new places, and putting things into context.

Buy Tarka the Otter on Amazon

Where: (12 miles roundtrip) North Devon, England. The 31- mile section between Brauton and Meeth is a rails-to-trails conversion, car-free, mostly tarmacked, and very flat.

How: We started at the train station in Barnstable and rode along the southern side of the Taw Estuary, past historic Fremington Quay to Instow where we had lunch.

There are 21 yellow-topped audio posts spread out along this section of the Trail. Each post has a different information plaque and QR code you can scan with your smartphone to learn about a particular place on the Tarka Trail. (We didn’t do this since we were to busy riding, soaking in the sunshine, and watching birds, but it’s nice that it’s there!)

Cafés: The Fremington Quay Café is in an old railway depot with a lovely deck in Fremington (three miles from Barnstable). There are several restaurants and pubs in Instow. We followed the signs to the Wayfarer Inn and were delighted with our lunch. In fact, there are lots of places to eat along the Traka Trail—you never have to ride more than a few miles without encountering a restaurant or café.

Bike Hire: Many places rent bikes near the Tarka Trail. We used Tarka Trail Cycle Hire at the Barnstable train station. It is right on the trail so you never have to ride in traffic. Otter Cycle Hire in Braunton is also adjacent to the trail. Both offer tag-a-long bikes and trailers for little ones. Call ahead to reserve bikes before you go.

You can ride a bike through several of the places not to miss along the North Devon Coast. The town we stayed in, Ilfracombe, makes that list.

If you are in Dorset, the southern part of the UK, check into the bike route between Portland and Weymouth. The four miles between towns is traffic free the whole way from Victoria Square in Chiswell to Weymouth town centre, with beautiful scenery along the way. And there are so many  things to do in Weymouth and Portland. 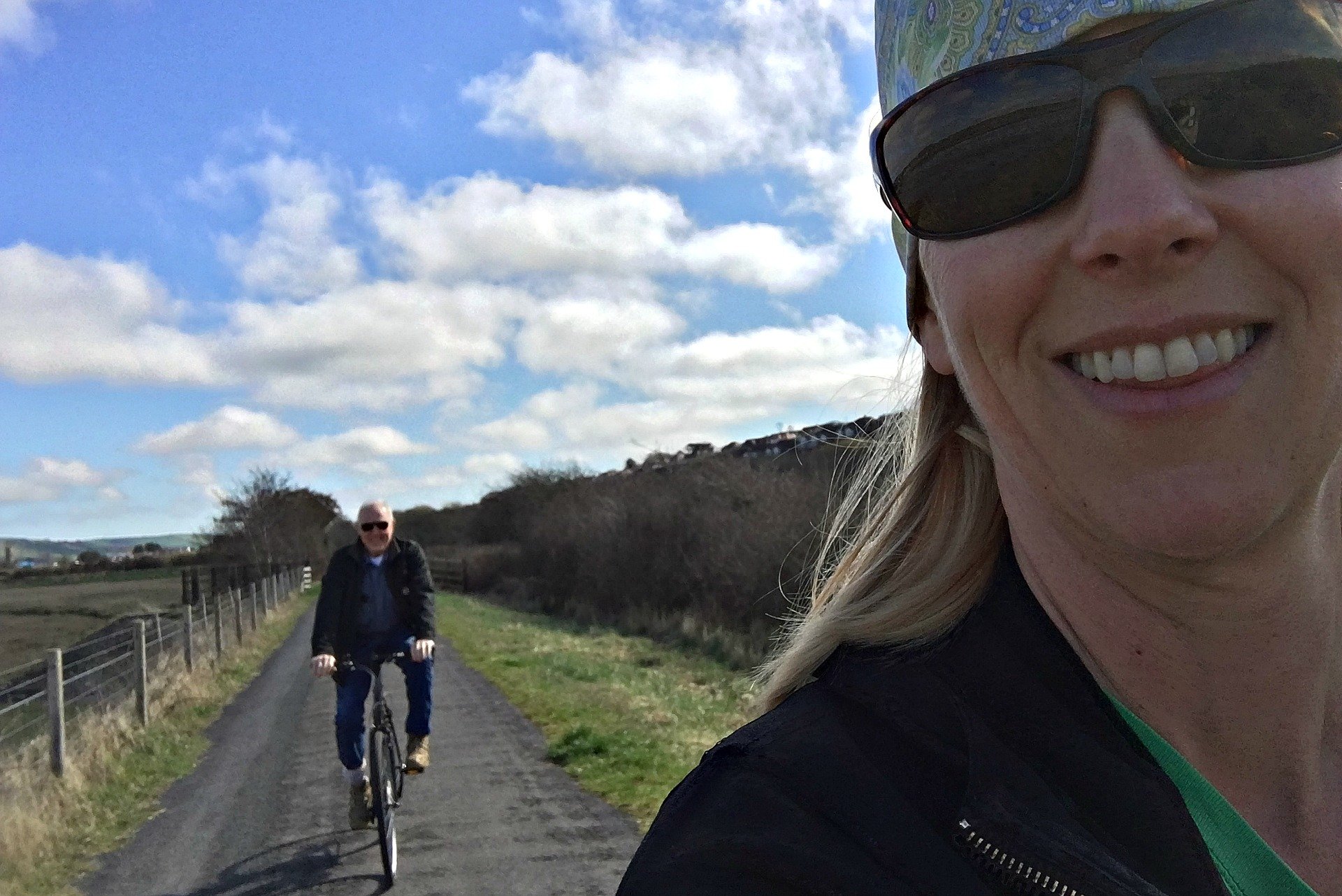 More Resources for Walking and Biking in Devon 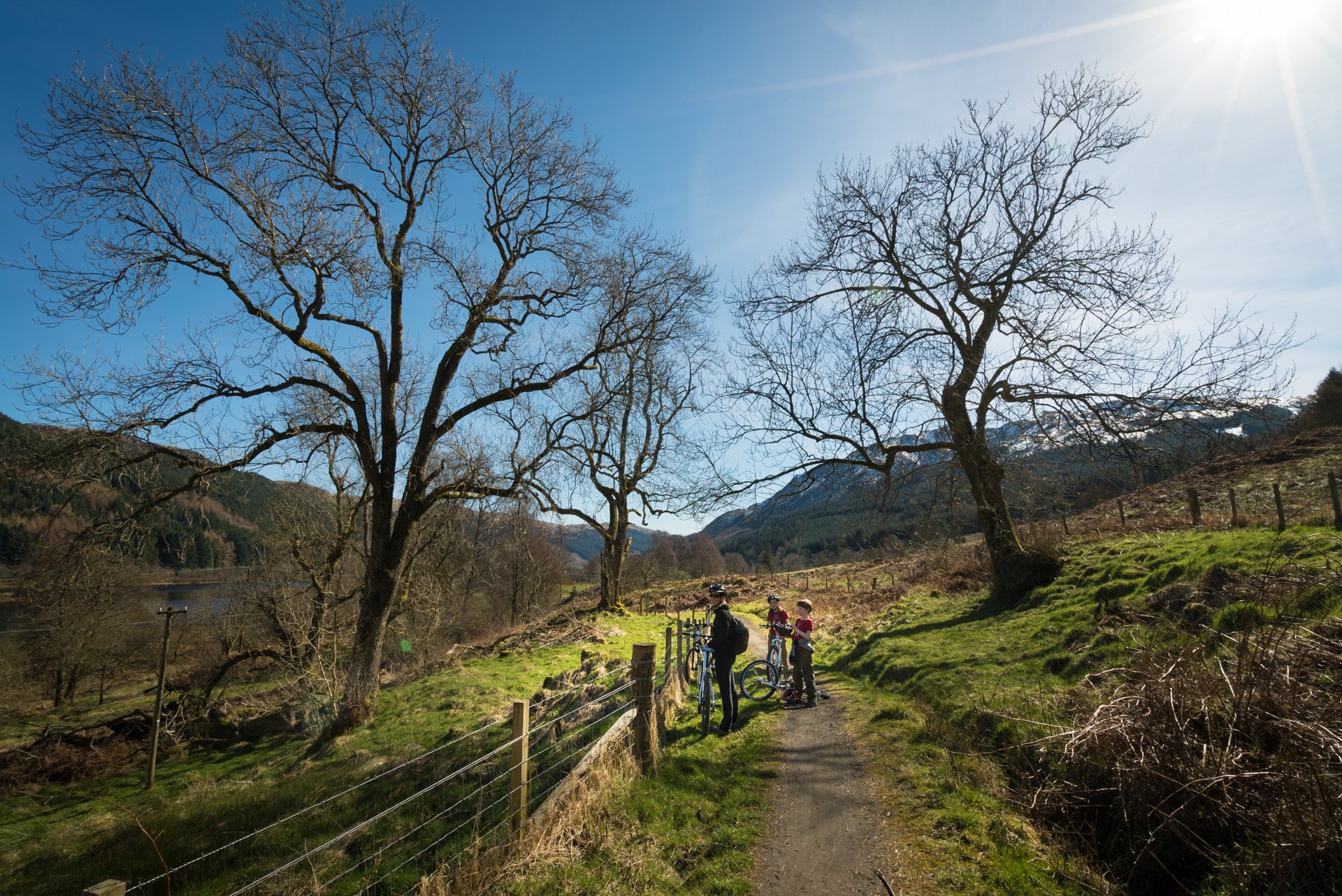 Jazzed by our bike ride in Devon, England, we decided to hire bikes again in Loch Lomand and The Trossachs National Park. We stayed in Callander for a month and Cycle Route 7 passed right through this cute little town. We chose a mostly flat route as we were looking for easy bike rides.

Where: (18 miles roundtrip) We rode from Callander to Strathyre, a small part of Cycle Route 7. National Route 7 links Sunderland and Inverness. It forms two-thirds of the famous Sea to Sea (C2C) cycle route before heading north to Glasgow via Glen Trool Forest and the Ayrshire coast, before passing through two National Parks – Loch Lomond & The Trossachs and Cairngorms.

How: We left right from the cycle hire shop in Callander and hopped onto National Route 7 North. The trail follows the old Oban Railway along the River Leny, passes the delightful Falls of Leny and then through oak woods to Loch Lubnaig. After four miles of flat trail, we climbed a couple hills and one very steep zig-zag section. This part is short and you can just walk the bikes it it is too steep to ride. Then it was all downhill to Strathyre.

Cafés: Strathyre has a couple pubs and inns. Make a reservation if you want to visit one of them. We stopped at Broch Café (reservations not needed) for beer and dessert after picnicking along the river. You’ll see it from the bike trail.

Bike Hire: We rented bikes for Cycle Route 7 at Wheelology in Callander. Again, I recommend reserving the bikes ahead of time. 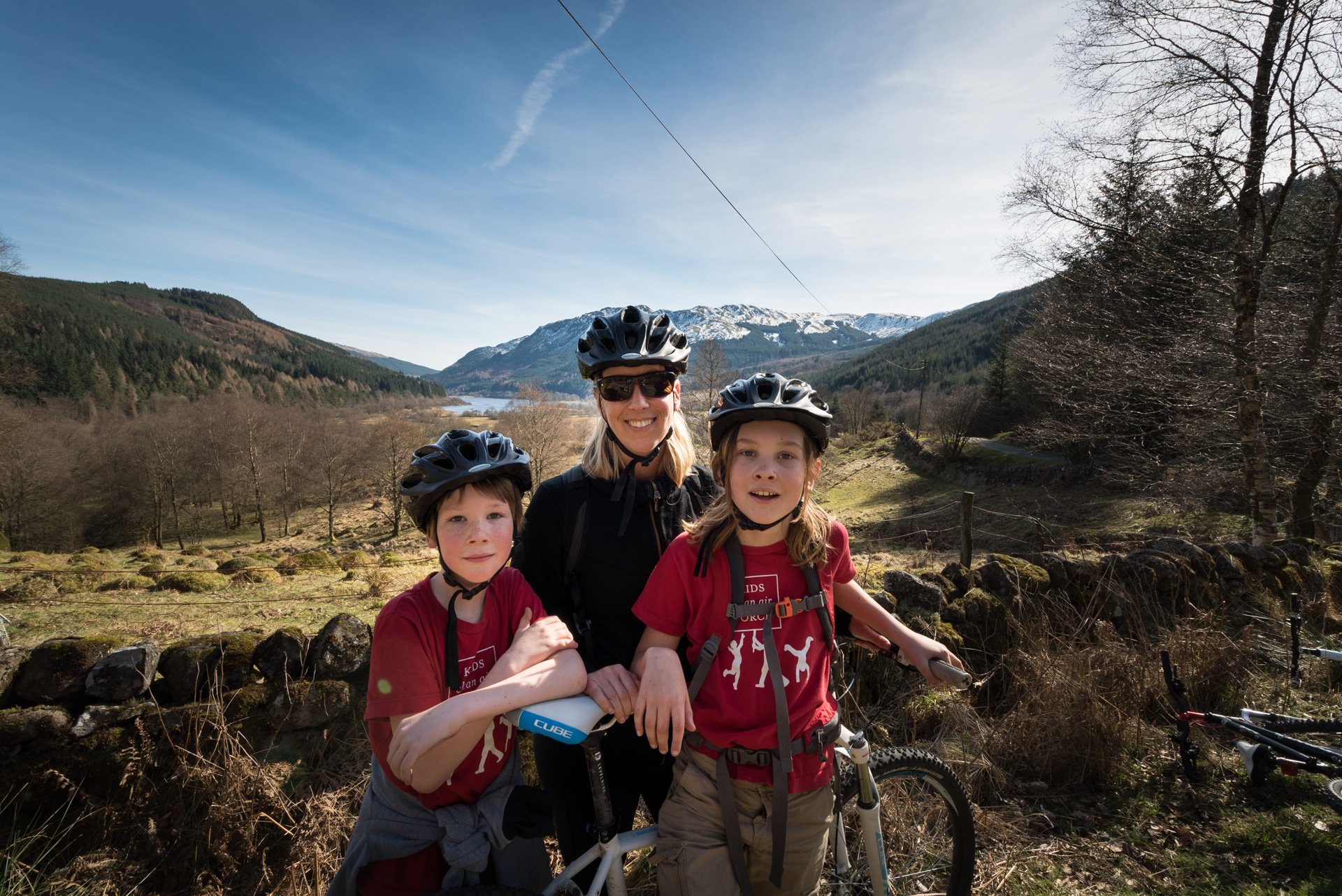 More Resources for Biking in Britain 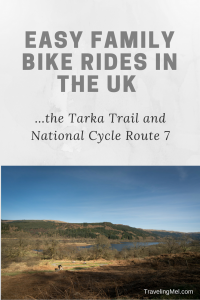 20 thoughts on “Easy Family Bike Rides in England and Scotland”