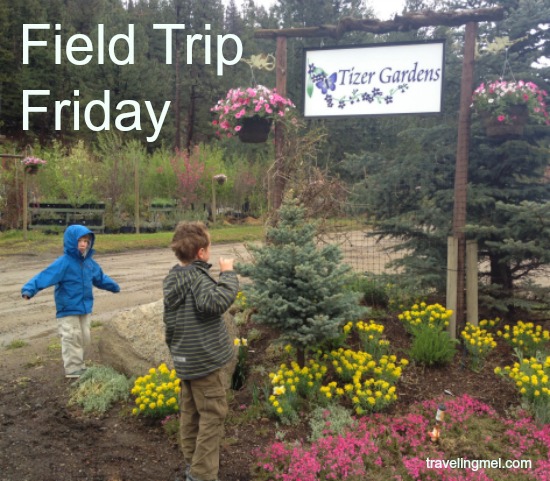 It’s time for another edition of Field Trip Friday and this week it’s a doozy–three locations in one super fun trip.

We started with a two-hour drive to Jefferson City and Tizer Botanic Gardens and Arboretum. I didn’t even know this place existed until last fall. I saw a friend had “liked” it on Facebook, and about had a heart attack of excitement. A botanic garden in my very own state?!?! Why didn’t someone tell me about this?

All winter I checked out the photos of gardens under the snow that the Tizer folks posted, and when spring arrived I was ready to go. For the boys’ education, of course.

TIzer Botanic Garden has about 0.05 miles of trails through several gardens. It’s not huge, but it is packed full. You can check out the various gardens and homesteaders cabins on their site. It was raining on the day we went, so we didn’t linger as long as we would have on a sunny day. In retrospect, I should have waited another month. In addition to sunshine being likely, there would have been a lot more blooms. 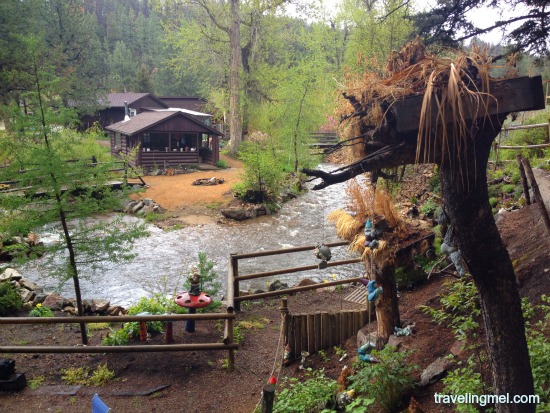 Lots of fairies and gnomes perched along the banks of Prickly Pear Creek. 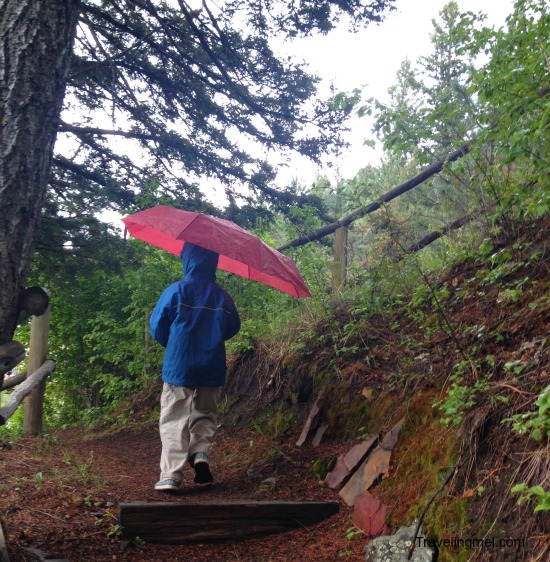 Get your free loaner umbrella to enjoy Tizer on a rainy day. 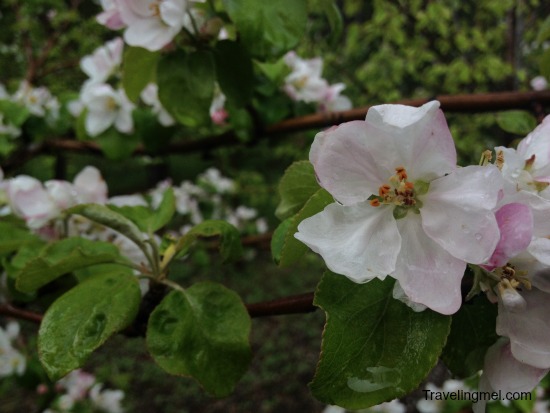 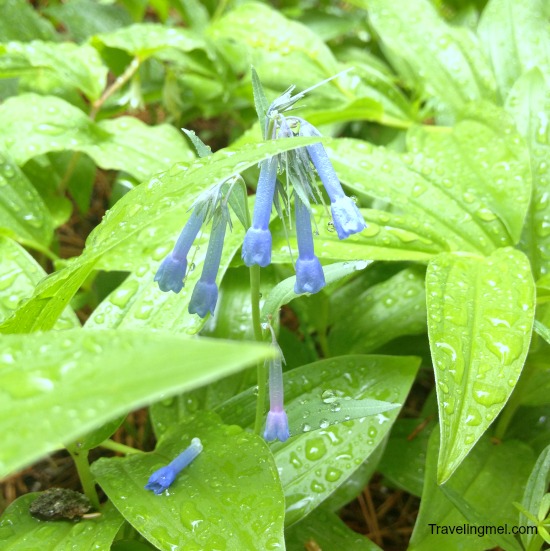 Bluebells on the Wildflower Walk. 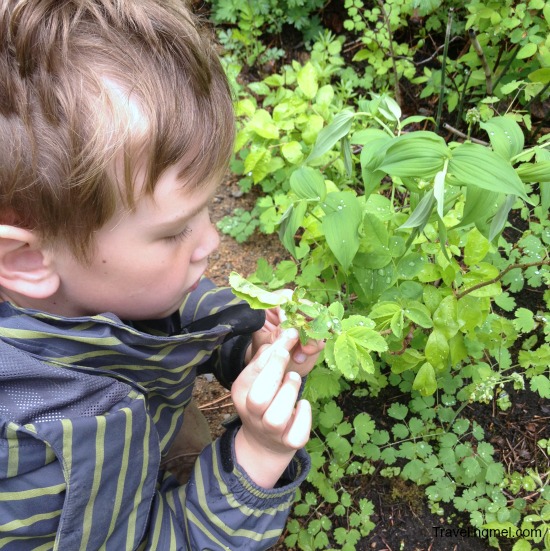 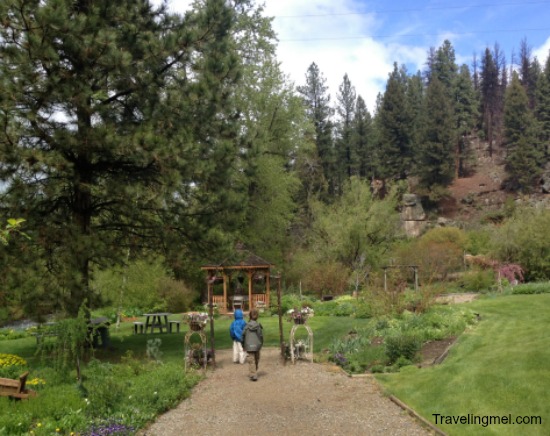 Heading to the gazebo for lunch during a break in the rain. 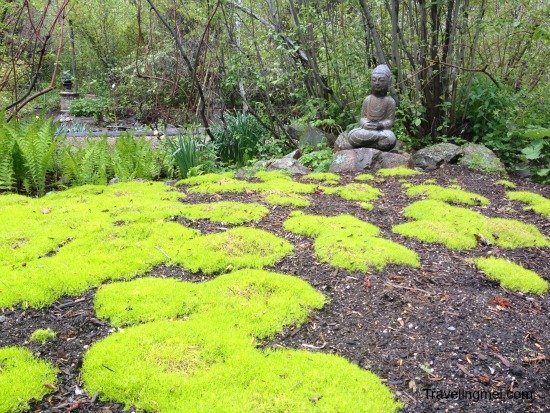 Scotch moss and a Buddha in the Meditation Garden.

Still, it was a lovely visit. I picked up a couple plants at their garden center and am looking forward to another trip. 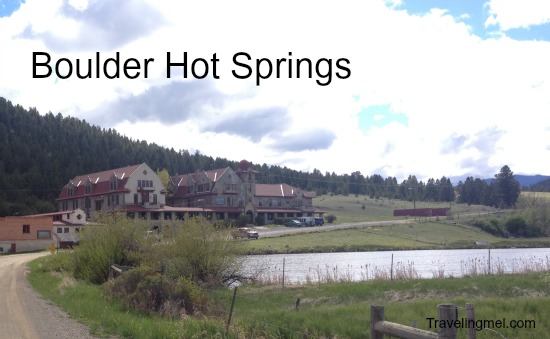 After walking around in the rain looking at plants, the boys were ready to warm up and play. On to Boulder Hot Springs. Although the buildings look super creepy as you drive up, the pool is great. I’d been there once before, but it was eight or more years ago and the boys had never had the pleasure of dipping their toes in the warm mineral waters.

We’ve had to stop going to our local hot spring lately because the water has been ridiculously hot. At Boulder Hot Springs it was perfect for swimming and soaking as we checked out the mountains of the Deerlodge National Forest.

There are two indoor plunge pools in each changing room– a hot pool and a cool pool. They are segregated by sex. I couldn’t send the boys into a pool alone, and a sign on the women’s changing room door said boys four and older were prohibited. (I took Finn in with me anyway; I’m not sending my four-year-old into a changing room he’s never been in before. Anders managed it, but the two of them together is trouble.)

So, the plunge pools were out for us. I’m the only one I trust alone in a swimming pool. There are some coed hours, but not during the time we were there. Luckily, it didn’t matter. We had a blast swimming in the big pool, and we’d rather be outside anyway. 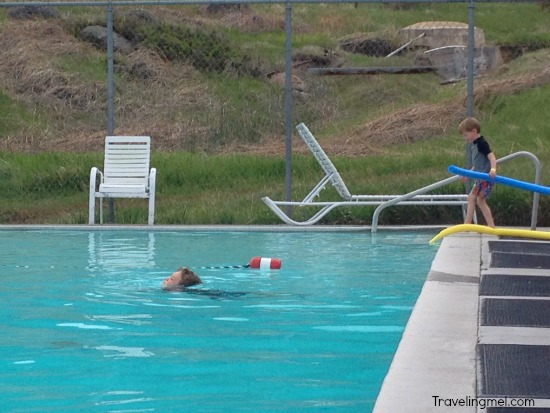 The outdoor pool was the perfect temperature for swimming. 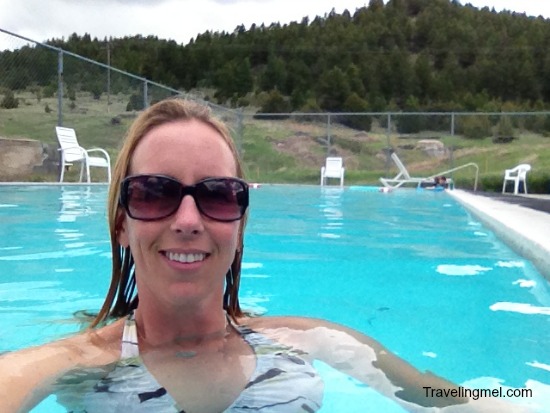 Maybe these field trips aren’t just for the kids…

Next time I’m in Boulder, I’d love to check out the Radon Mines. They sound kind of weird, and I like weird. Not really kid-appropriate, though.

Since we were in the neighborhood, we made a stop at Elkhorn ghost town in Elkhorn State Park. Dating from the second wave of Montana’s gold and silver rushes, Elkhorn has survived as one of the better ghost towns in the west. Its principal mine, the Elkhorn, was discovered around 1872. Booming in the 1880s and 1890s before tapering off in this century, the Elkhorn reputedly produced some $14 million in silver during its long life.

A lot of the old buildings have been renovated and have people living in them. And there is still an active mine. Anders was hoping to see some dynamite, but unfortunately, the mine was fenced. There are a few standing, unoccupied buildings, which are fun to look at. If we had more time, I would have like to take the boys through the graveyard and walked around a bit more. Next time. 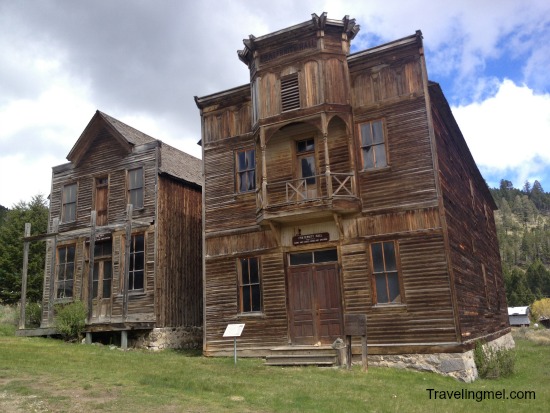 What: Tizer Botanic Gardens and Arboretum, Boulder Hot Springs, and in Elkhorn State Park Ghost Town.
Why: Flowers! Plants! High elevation gardening! Not to mention hot springs, old buildings, and a piece of Montana history.
Where: Check out the links above for directions to each place. Tizer Gardens and Boulder Hot Springs have their entrance fees listed on their sites.
Who: Families, kids, adults, plant lovers, history buffs.