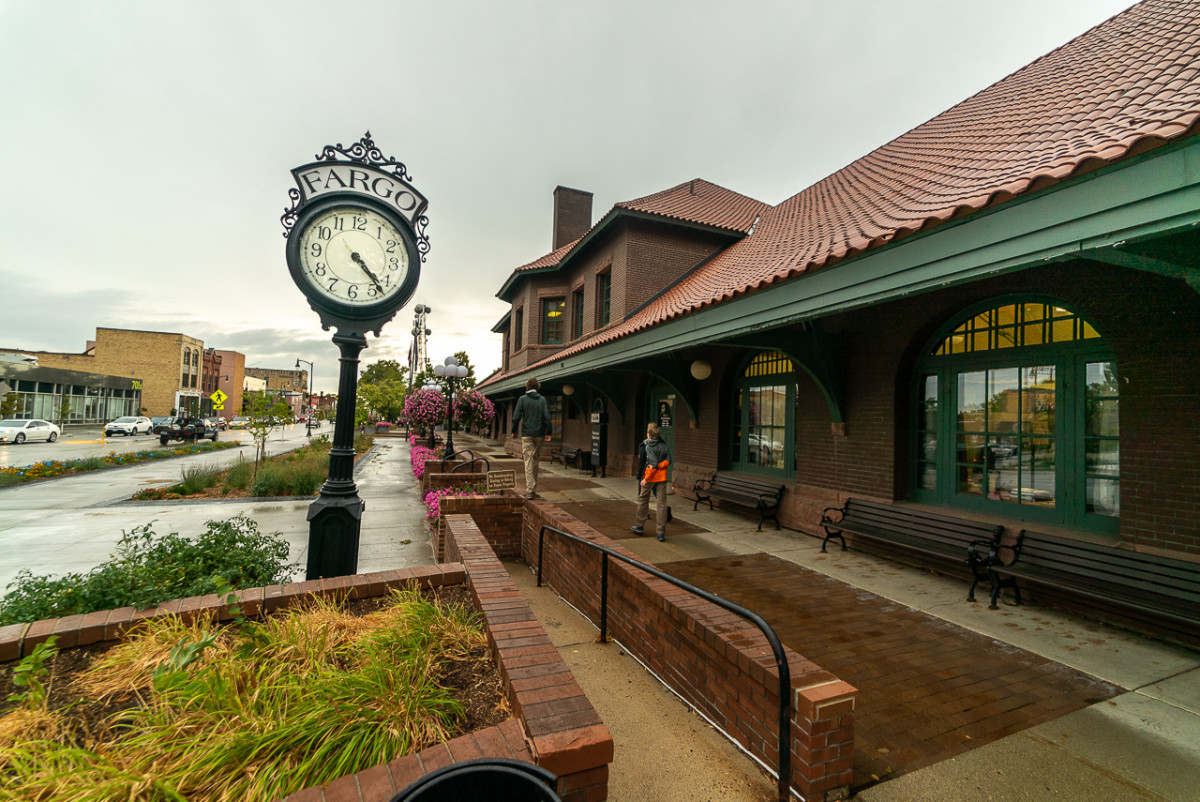 We recently found so many fun things to do in Fargo, ND, and I can’t wait to share them with you here.

When we decided to visit Fargo, I didn’t know much about it. Honestly, the only thing I knew about Fargo came from the movie Fargo and most of that movie didn’t even take place there. Plus, it’s a fictional movie…I was pretty sure I wouldn’t end up in a wood chipper.

We were delighted by the city and all the Fargo attractions. We stayed in the downtown area and were enamored with all the shops, restaurants, murals, and Fargo activities. We were also happy to discover museums and outdoor activities just a few miles away.

Like much of North Dakota, Fargo has a strong Scandinavian heritage. As a decedent of Swedes who moved to the midwest, I felt right at home. At the same time, Fargo seemed to be one of the more diverse cities in North Dakota and socially open.

Our stay in Fargo was part of a North Dakota road trip. Click through to see all of the stops. 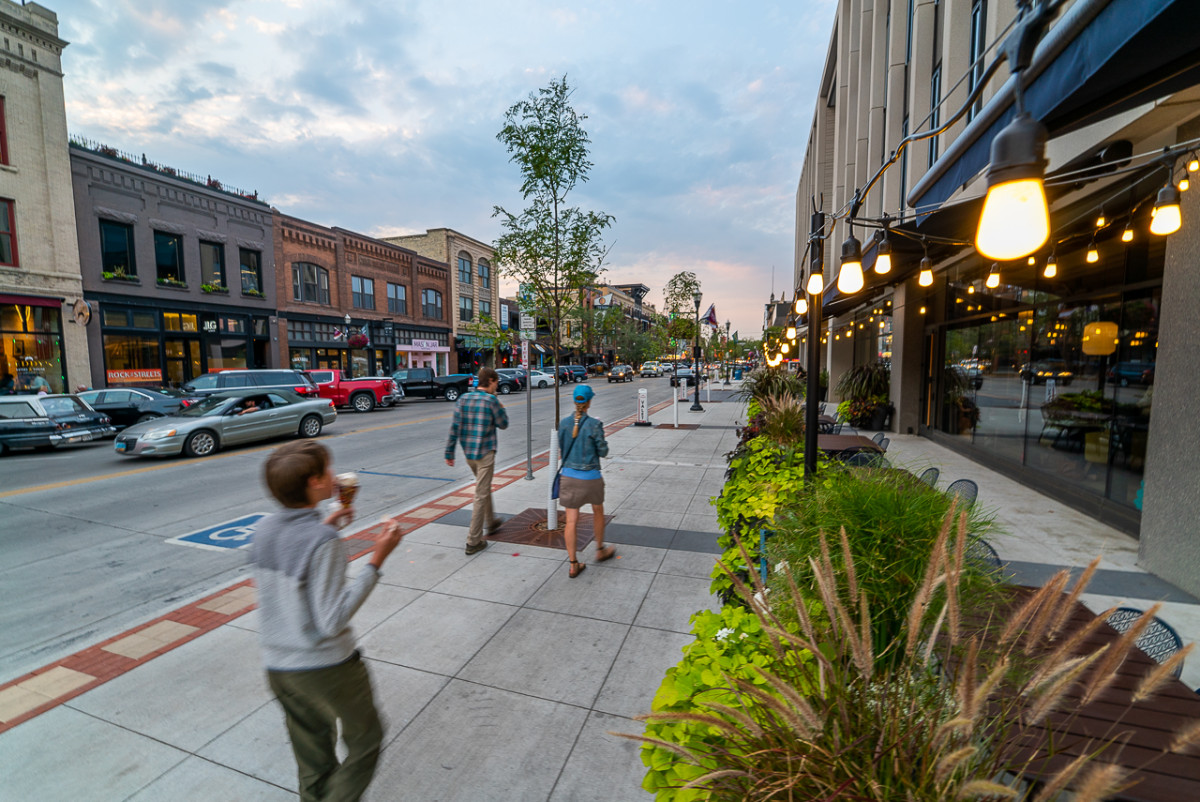 Fargo, North Dakota is on the eastern border with Minnesota. It’s east of Billings, MT; south of Winnipeg, Manitoba; and northwest of Minneapolis, MN.

The Red River divides Fargo from its sister city, Moorehead, Minnesota, and people often group the two together. In fact, Visit Fargo-Moorhead is the official tourism website for the area. You can also check out the North Dakota Tourism site for more attractions in Fargo, ND.

We drove from Montana, but of course, you could fly to Fargo. A lot of people pay a visit during a road trip to Yellowstone, Minneapolis, or the West Coast. 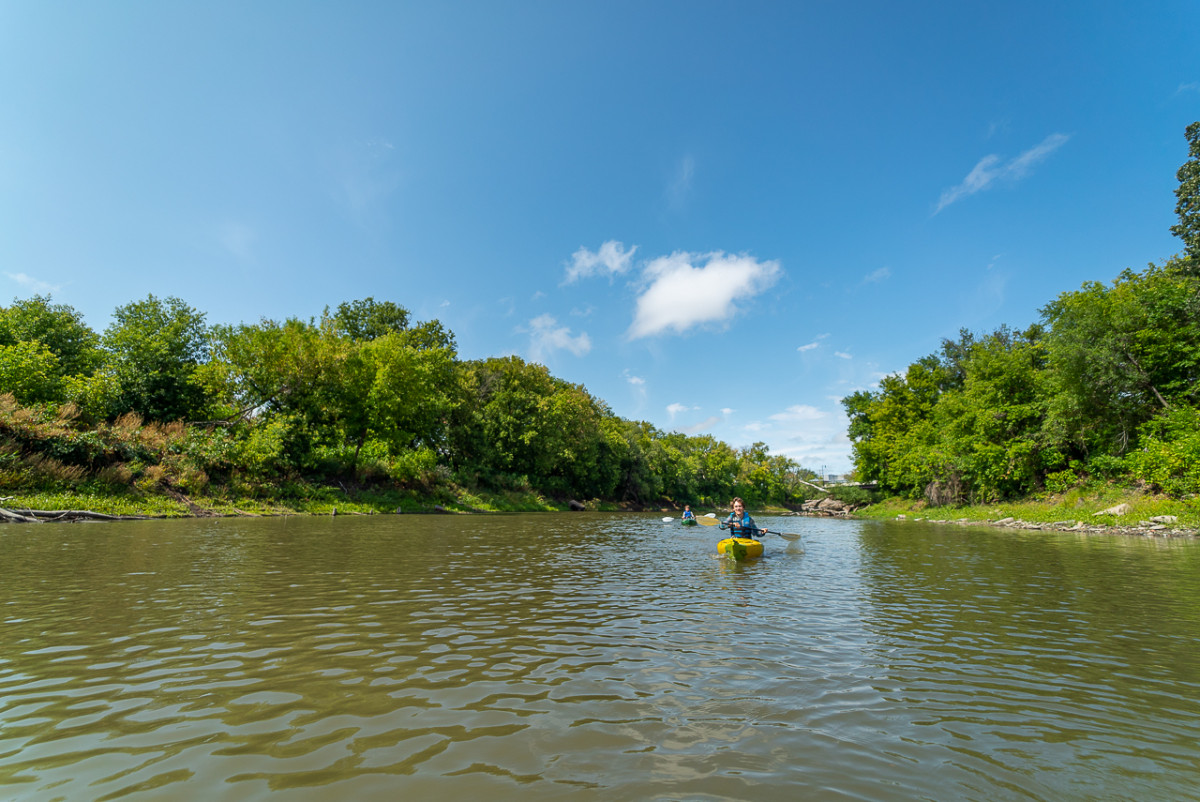 Fun things to do in Fargo, ND 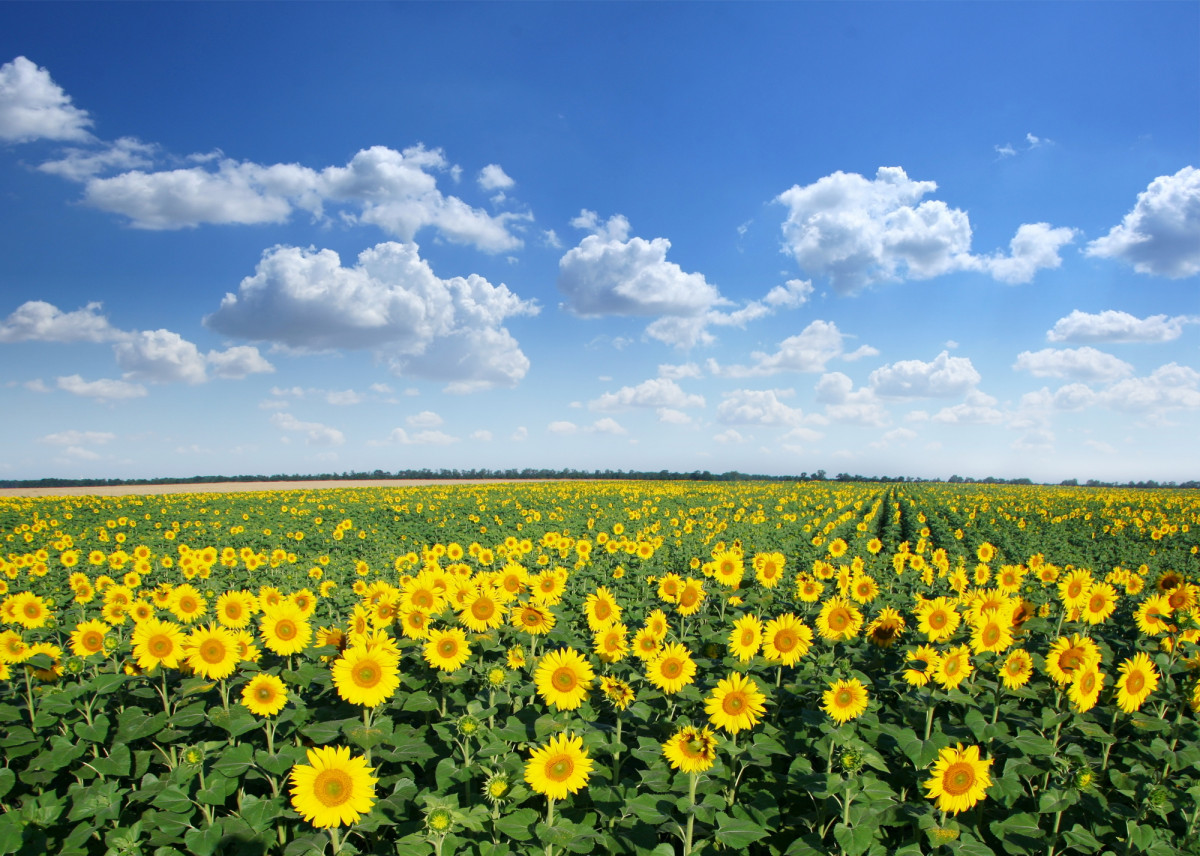 Sunflower fields are one of the Fargo, ND attractions that you won’t want to miss if you can time it right. The photos of people standing in the fields are gorgeous. But more than just getting that perfect Instagram shot, the thousands of cheery, yellow sunflower heads will bring a smile to your face.

We drove through Kindred Area sunflower fields on our way into Fargo, but were a little late and didn’t catch the blooms.

You can find a map to North Dakota’s sunflower fields and weekly updates on where the best blooms are.

After checking into the Jasper Hotel, we walked across the street to Teddy’s Eatery and Parlor for dinner. Not only was it convenient and atmospherically lovely, this Theodore Roosevelt-themed restaurant had great food and delicious cocktails. They are known for their fancy grilled cheese sandwiches, which the boys loved. Henry and I went with salads (honey salmon for me and chicken summer medley for Henry) and were equally pleased. 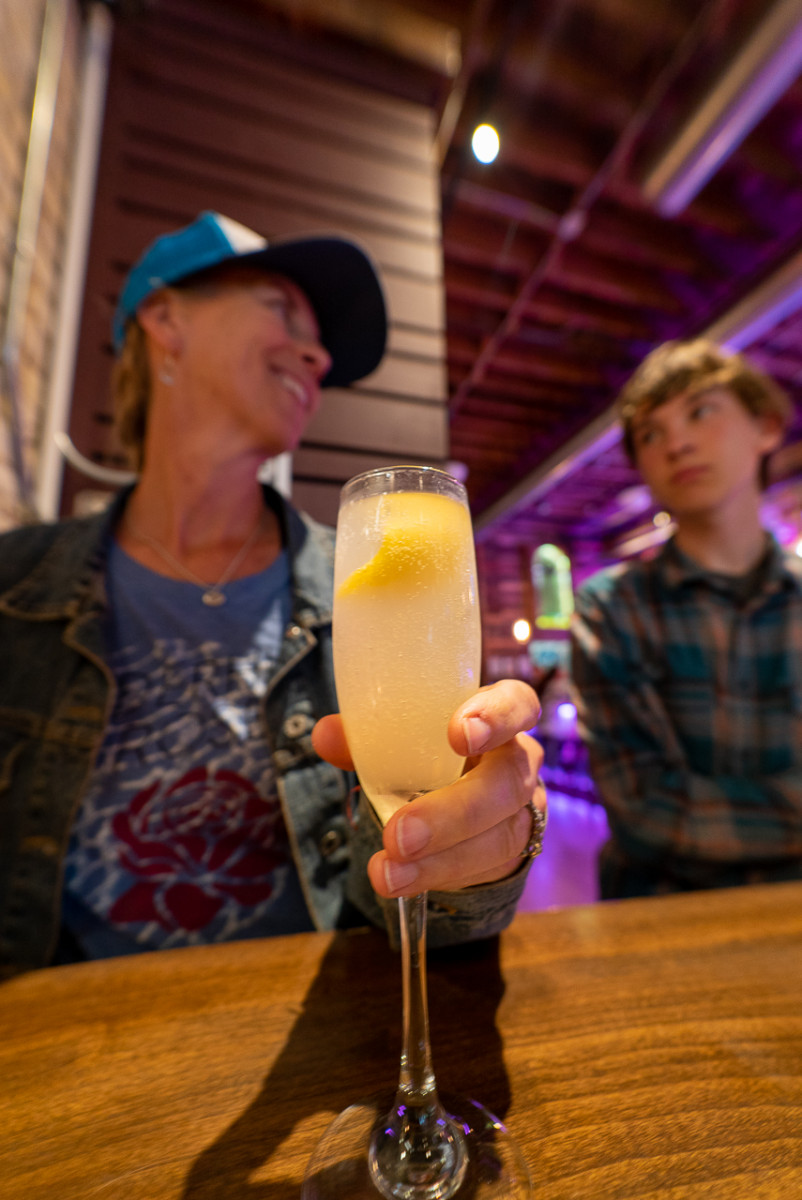 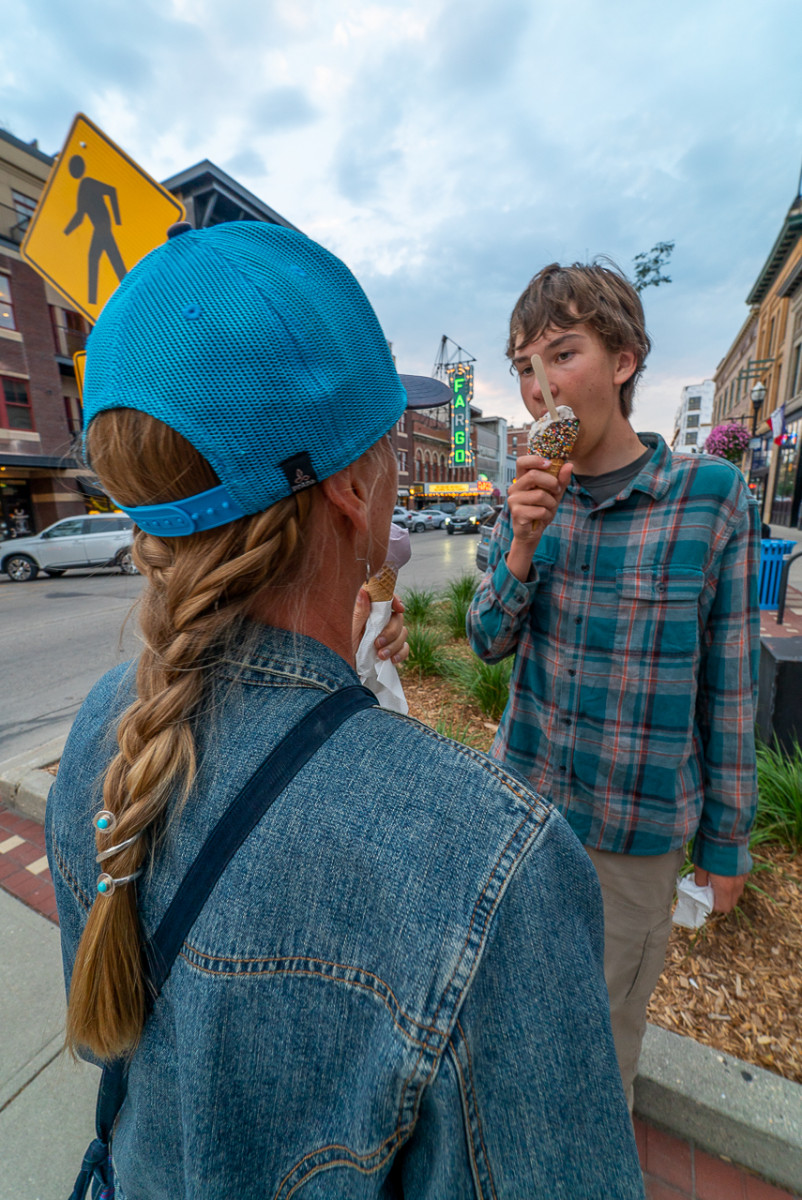 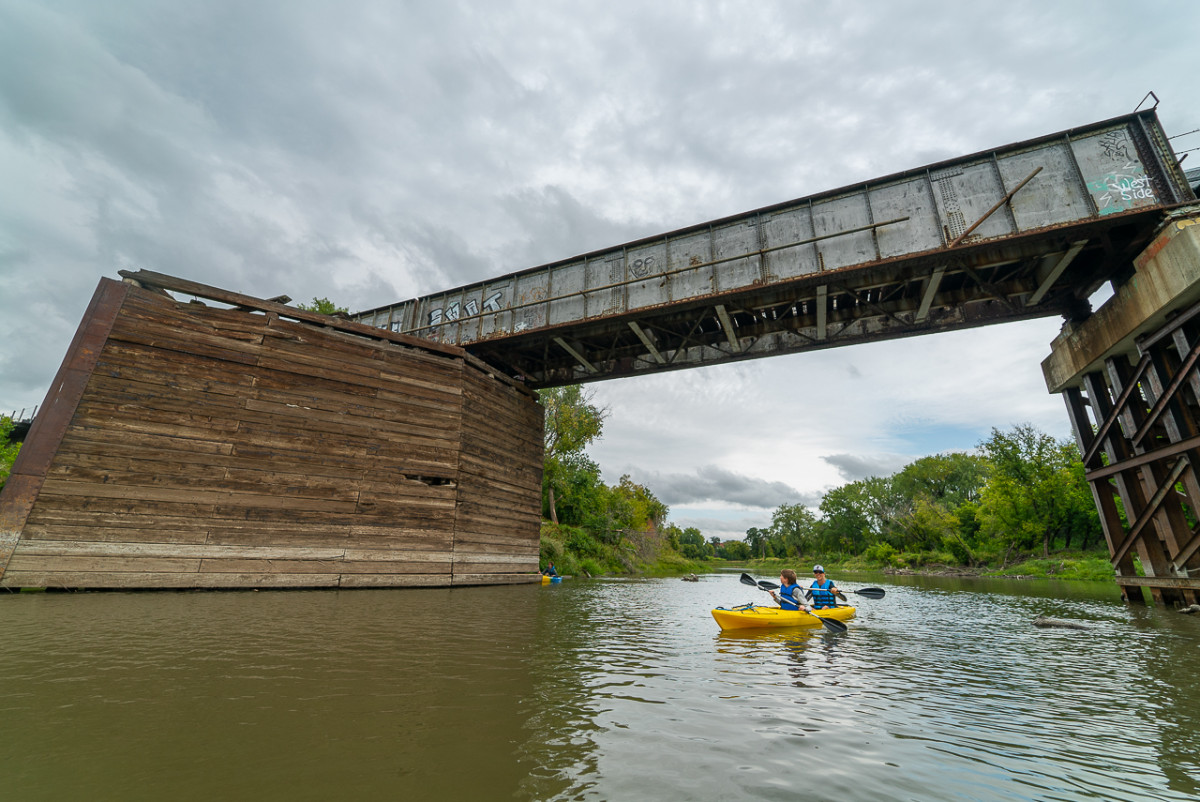 There are a lot of good places to eat in Fargo and we made an effort to try as many as possible. We kind of ate our way through the city. Our late breakfast at BernBaum’s included savory porridge, and bagels with lox.

BernBaum’s is a mix of Scandinavian and Middle Eastern food, which sounds strange, but works really well.

Full of food, we met Jon with Nature of the North on the Moorehead side of the Red River. He set us up with kayaks and information and cast us upriver from Hjemkomst Landing. I resonated with his philosophy on the importance of everyone having the opportunity to get outside and recreate. 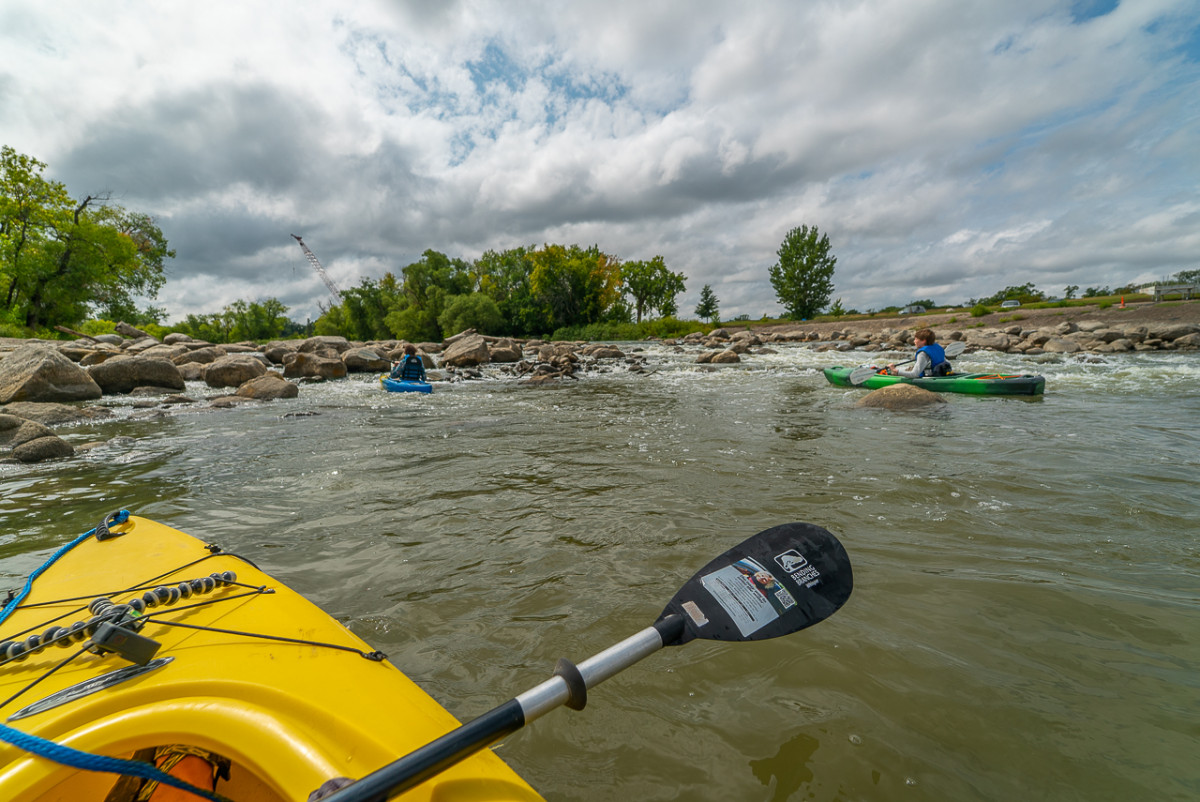 When you are considering what to do in Fargo, North Dakota, kayaking may not come to mind, but the Red River is perfect for boating with its slow, mellow flow. We paddled up to a small dam/cascade and hung out a bit and then paddled back down the river, past the landing until we wanted to turn back.

While it is an urban experience — we passed under bridges and could see buildings from the water — there are places where all we saw were riparian plants. We enjoyed both aspects of the float.

Fargo in particular, and North Dakota in general, has a lot of great art. Who knew? We grabbed the Fargo Mural Map and set out on a walk to see as many as we could. We love walking around cities and we love seeing art, so this was the perfect combination of both. 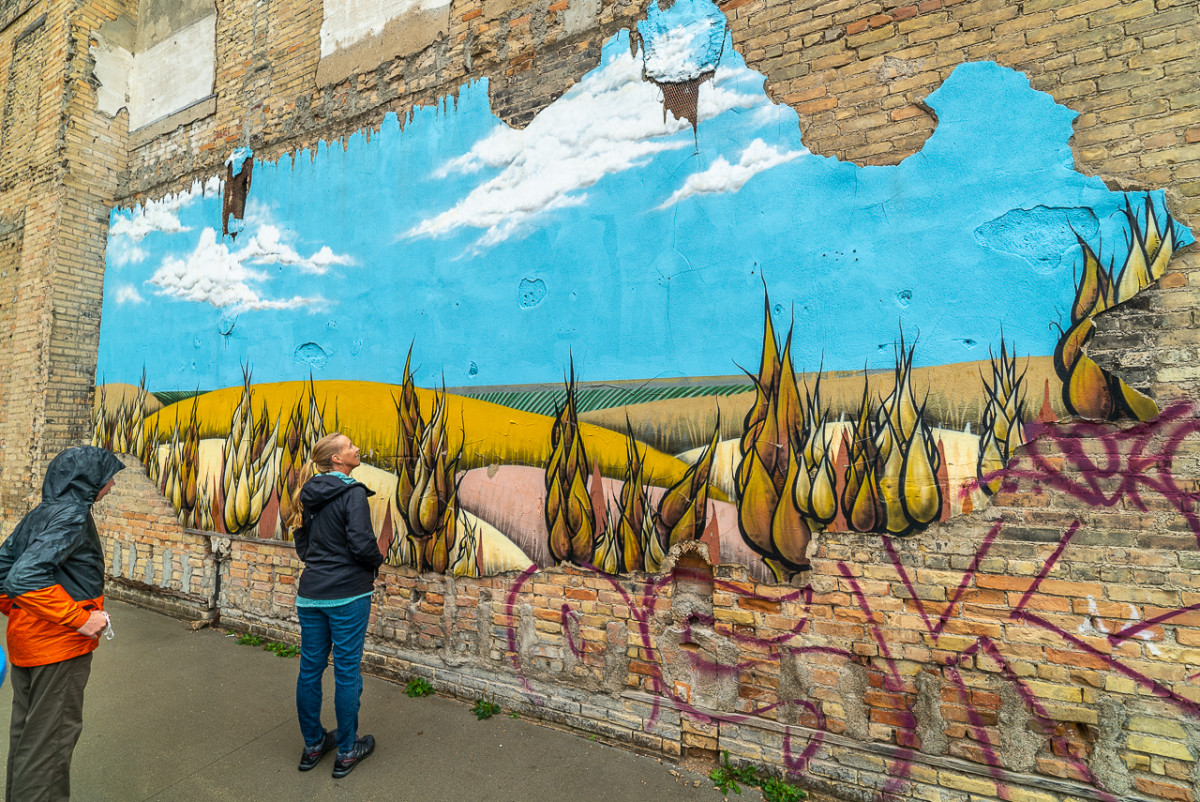 In addition to what’s on the map, we found several other murals and additional artworks.

Towards the end of our mural walk, we opted to pop over to Wild Terra to taste locally crafted hard cider. I loved the atmosphere in the cidery (is that what you call a place that makes cider? It is now) and kind of want to decorate my house in the same style. 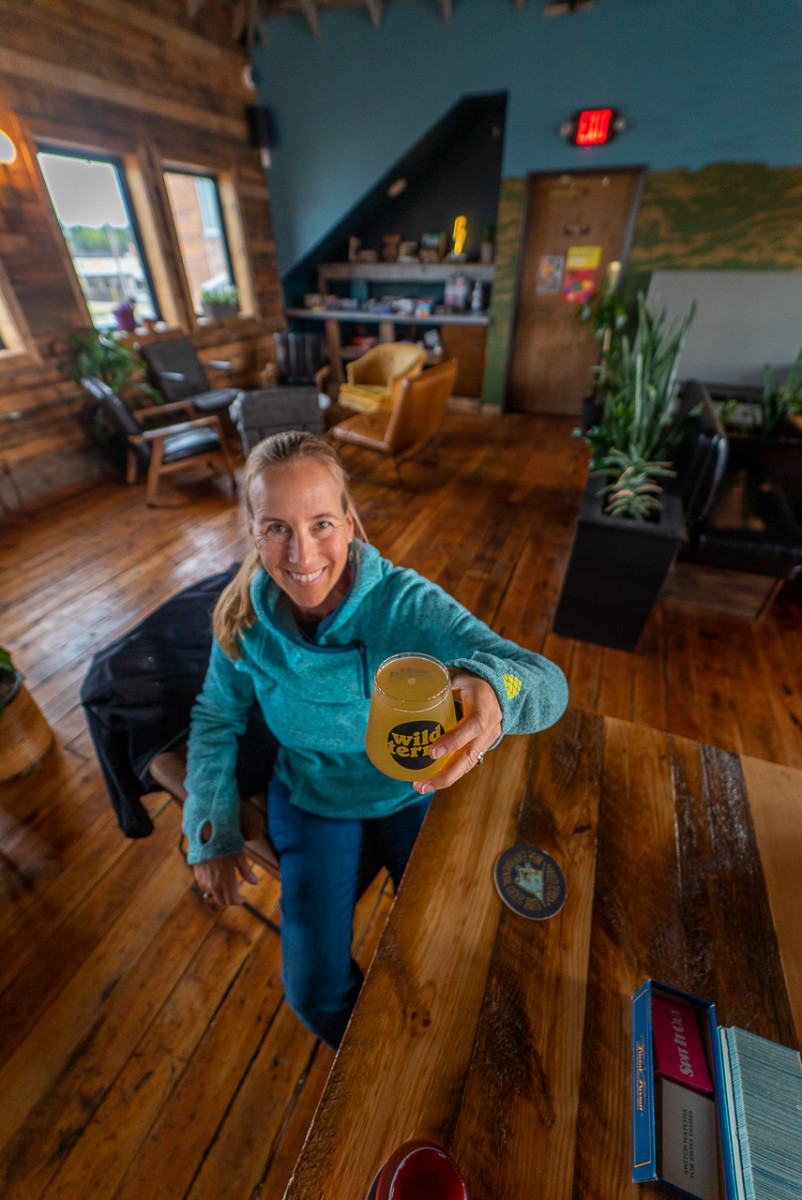 Henry and I enjoyed different ciders, but I forgot to write down the names so you will have to try for yourselves! Anders and Finn had Sprites, so there are some sodas for non-drinkers.

The outdoor patio looked really inviting, but since it was raining, we opted for indoor seating.

After ciders, we walked back to our hotel, stopping at 46 North Pints and Provisions for dinner. Salads, sandwiches, burgers, and “butcher block” were on the menu and we all found something we liked.

There are also a lot of beers available, as the restaurant name suggests, including some local beers on tap. They also have a cocktail menu.

Henry and the kids got ice cream at The Silver Lining again, but since I don’t have the metabolism of a hummingbird, I watched them eat and we wandered around downtown. 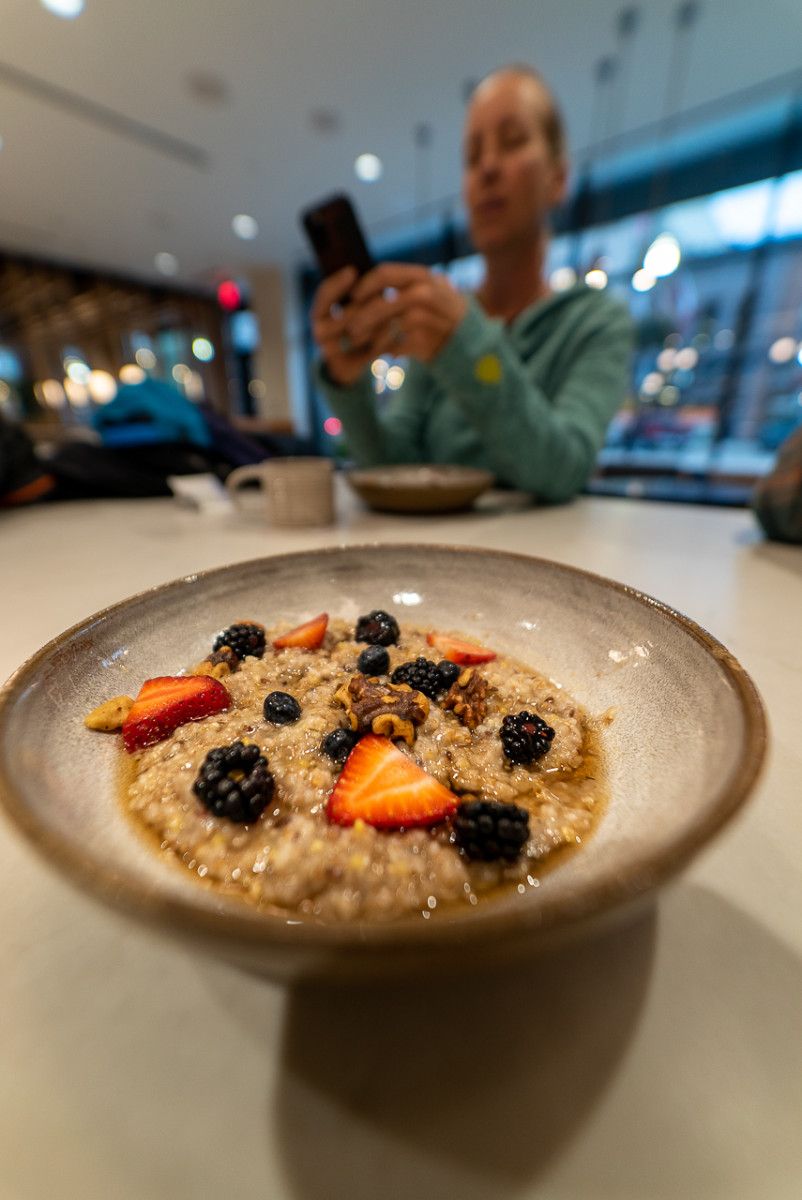 We started the day with breakfast at the Jasper Hotel. It was really good and perfect for something quick so we could get out and explore.

It was raining heavily, so we wanted something interesting indoors to do and the air museum fit the bill. The Fargo Air Museum has a collection of airplanes from a Wright Brothers’ flyer to the MQ-1 Predator unmanned aircraft. Most of the planes are still flown so they may be moving in and out of the hangers while you are there. 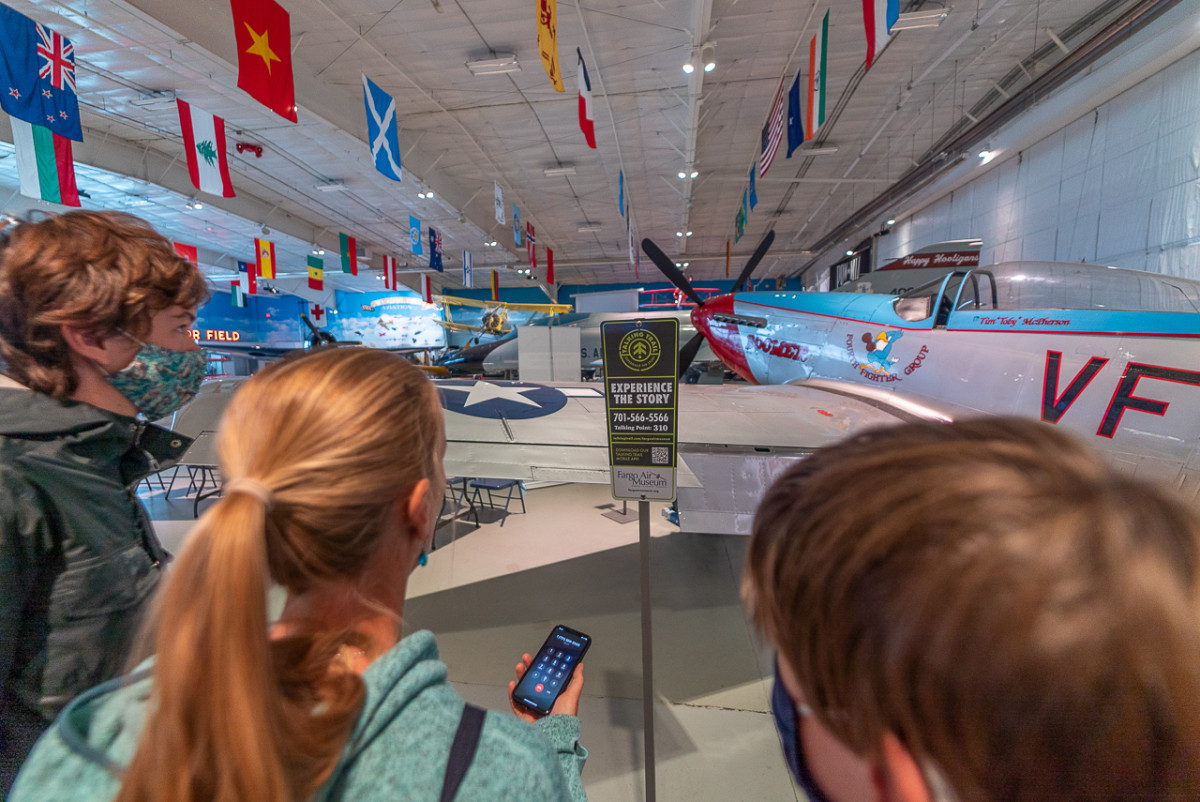 There are a couple of planes you can sit in and pretend you are flying. We also appreciated the Talking Trail signs. Call the number on the sign and listen to a recorded message about the airplane behind it. It was a great way to learn a little more about the planes, the people who used them, and the time period in which they were flown.

Not far from the Air Museum is the Northern Plains Botanic Garden. I love botanic gardens and can’t pass up an opportunity to visit one so this was added to our Fargo, ND things to do list. 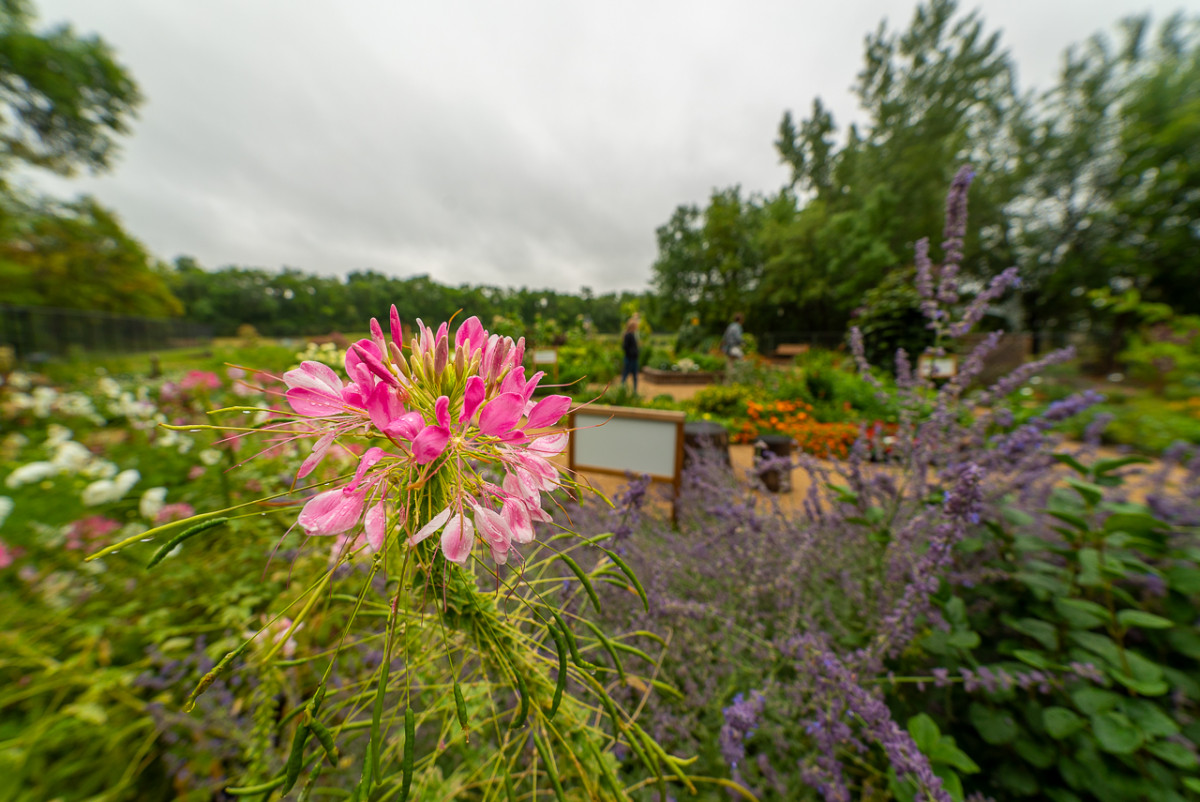 The Fargo garden is large and spread out across a park.

There’s a little Japanese garden, an edible garden, an alphabet garden (filled with colorful marigolds in the “M” section), and more. We enjoyed wandering around admiring the blooms and snacking on a few raspberries.

It was still raining, so we crossed the red river to see the Hjemkomst Viking boat at the Historical and Cultural Society of Clay County. We are kind of into Vikings, but even if you aren’t it’s worth seeing this ship. It’s magnificent. 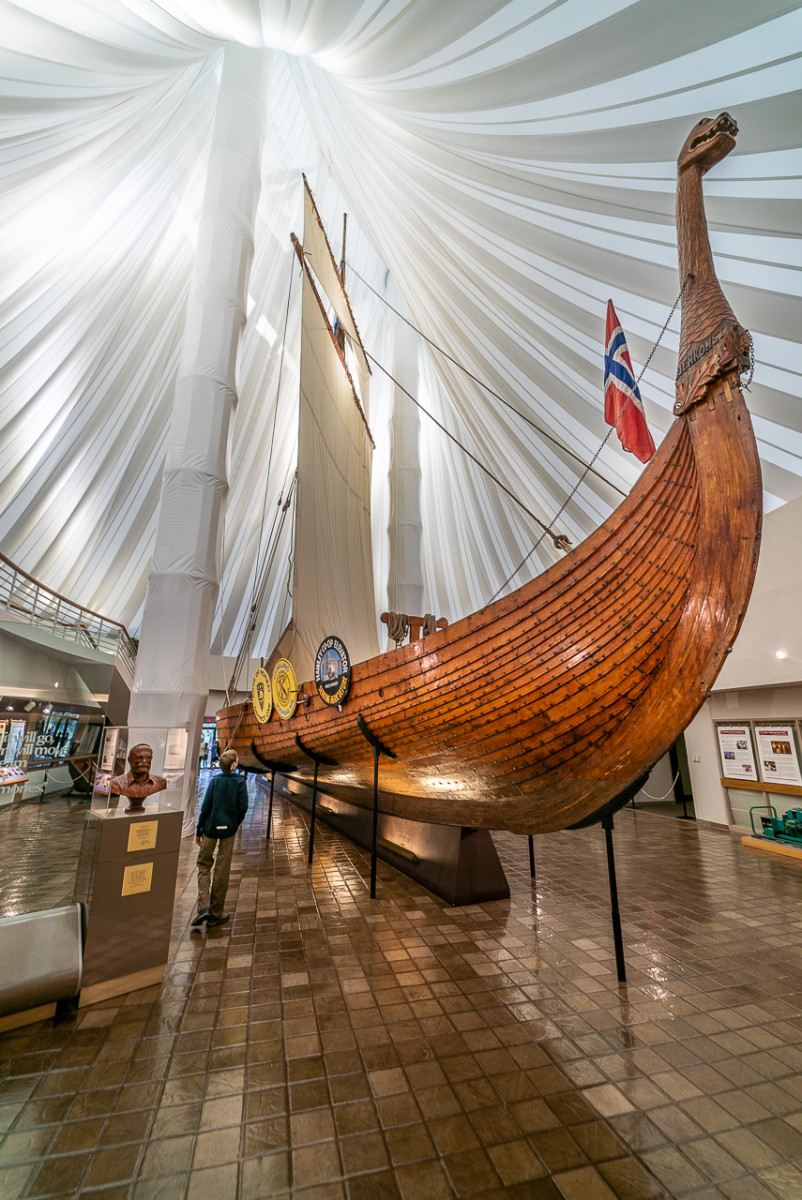 The Viking-style boat was built in the late 1970s-early 1980s and was sailed from the U.S. to Norway. Behind the museum, there is a replica stave church. These were common in Norway, but most of them burned down (wood structure + tar = fire hazard). Anders said seeing the Hopperstad Stave Church was the highlight of the day for him.

It seems like we fit a lot into this day, but we only spent about an hour at each of the places above. We came back to the hotel to rest, but Anders and I were feeling antsy so we walked up and down Broadway peeking in shops. 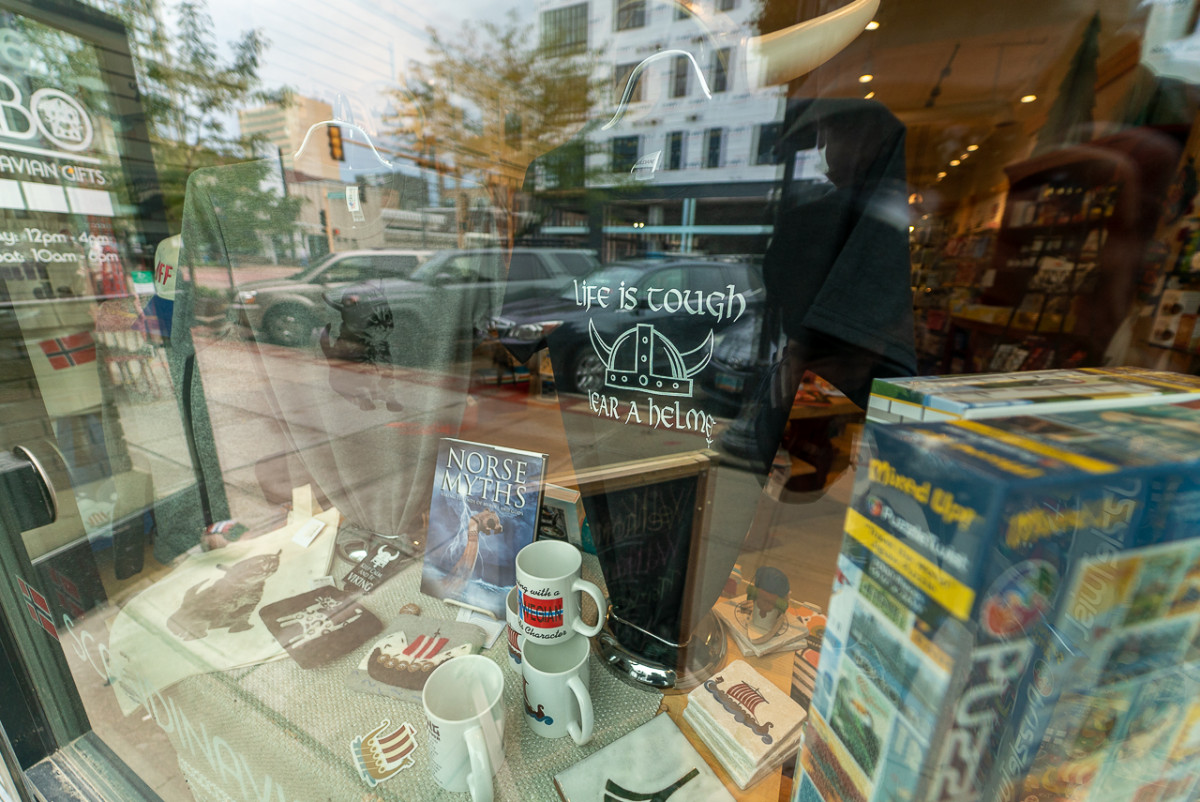 There are a lot of fun boutiques on Broadway and around Fargo. Some of our favorites are:

Before going to eat again, we decided to take a walk along the bike/walk path at Lindenwood Park. When we arrived at the park we saw that we could rent a surrey, so of course we did that. 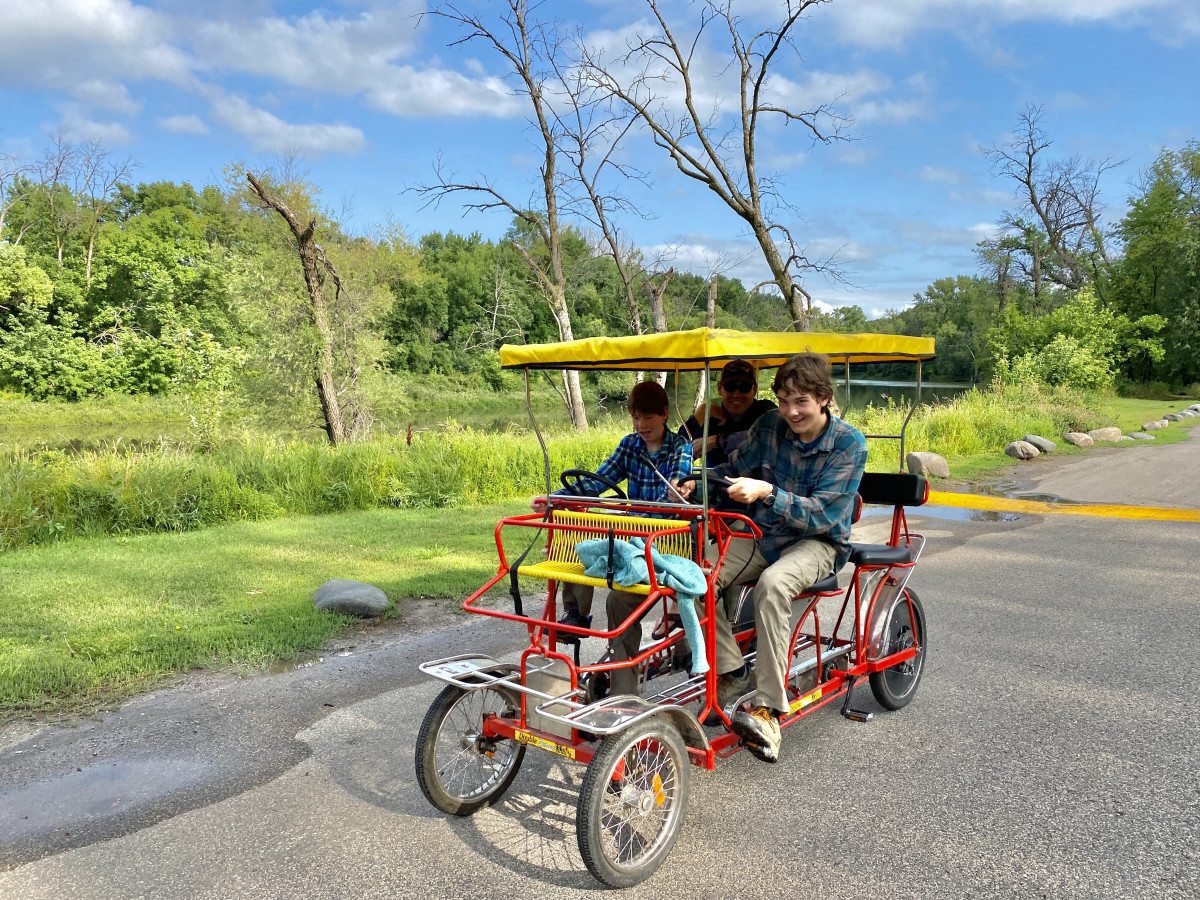 We pedaled the four-seater along the trail laughing the whole time.

The Red River Trail is 4.9-miles (out and back) and follows the Red River, hence the name.

With a good surrey workout under our belts, we headed to Rhombus Guys for gourmet pizza. We sat on the rooftop deck and had a view over Fargo. It was a great place to toast our inaugural visit to Fargo.

There was a concert at Broadway Square that evening. The boys and Henry got ice cream (again!) and we all listened to the music for a while. It’s worth doing a quick look to see what events are happening when you visit Fargo.

Other Fargo Things to Do

If you have more time in Fargo or aren’t drawn to one of the activities we did, maybe these other options will interest you.

We did want to visit Bonanzaville, but it rained a lot of the time we were in Fargo and much of this open-air museum is outside.

Bonanzaville is a village of 36 buildings on 12 acres that provides an insight into how Fargo’s earliest settlers, lived, what they possessed, and the challenges they faced. 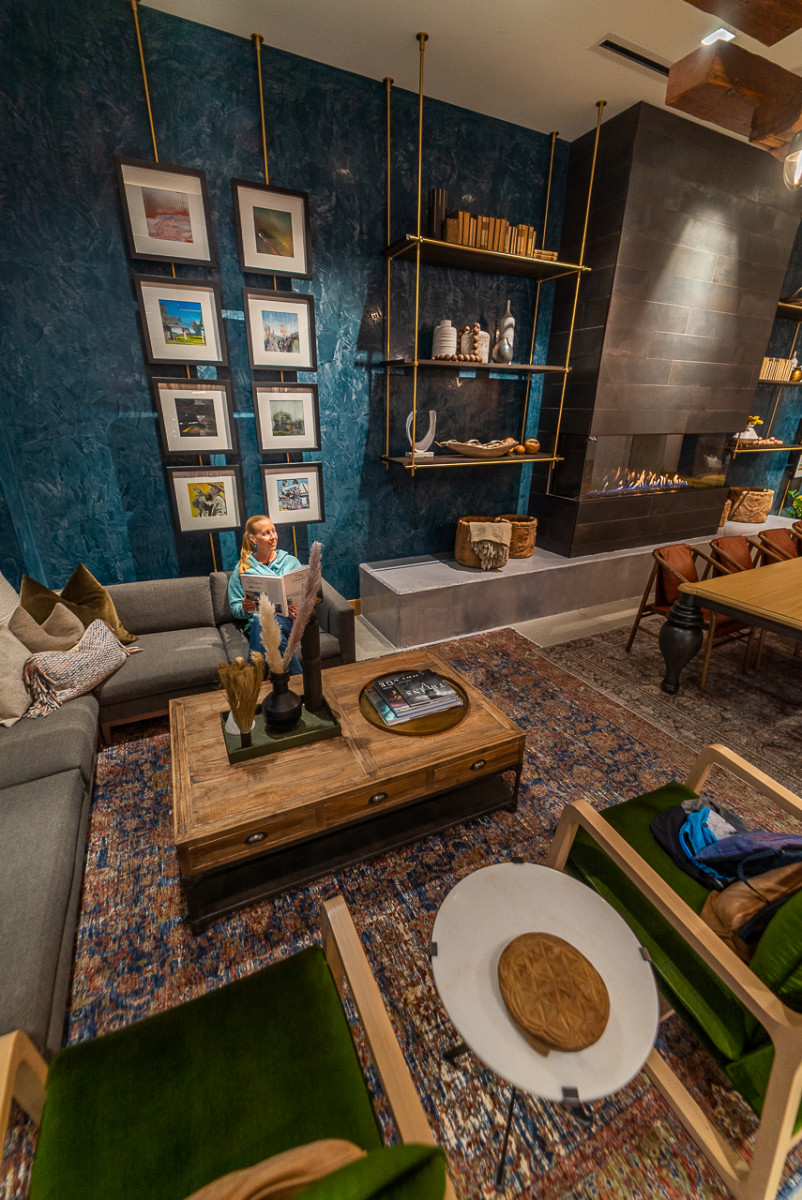 Where to Stay in Fargo, ND

We spent three nights at the modern, chic Jasper Hotel on Broadway Square. The hotel is lovely, the beds comfortable, the restaurant and bar delicious, and they have a parking garage. We were on the 12th floor and had an incredible view of Broadway and the Fargo Theater. A big bonus for us was that it was within walking distance to most places we wanted to go. 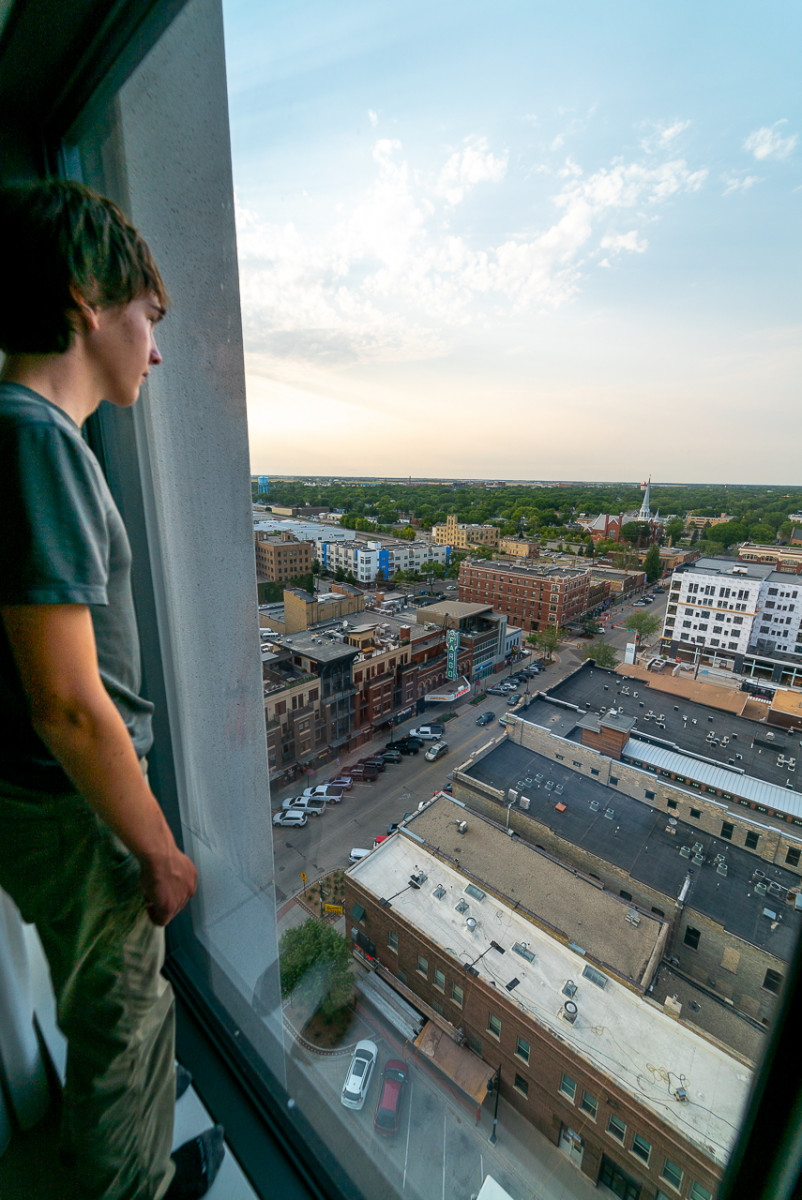 Why don’t you Pin this for later? 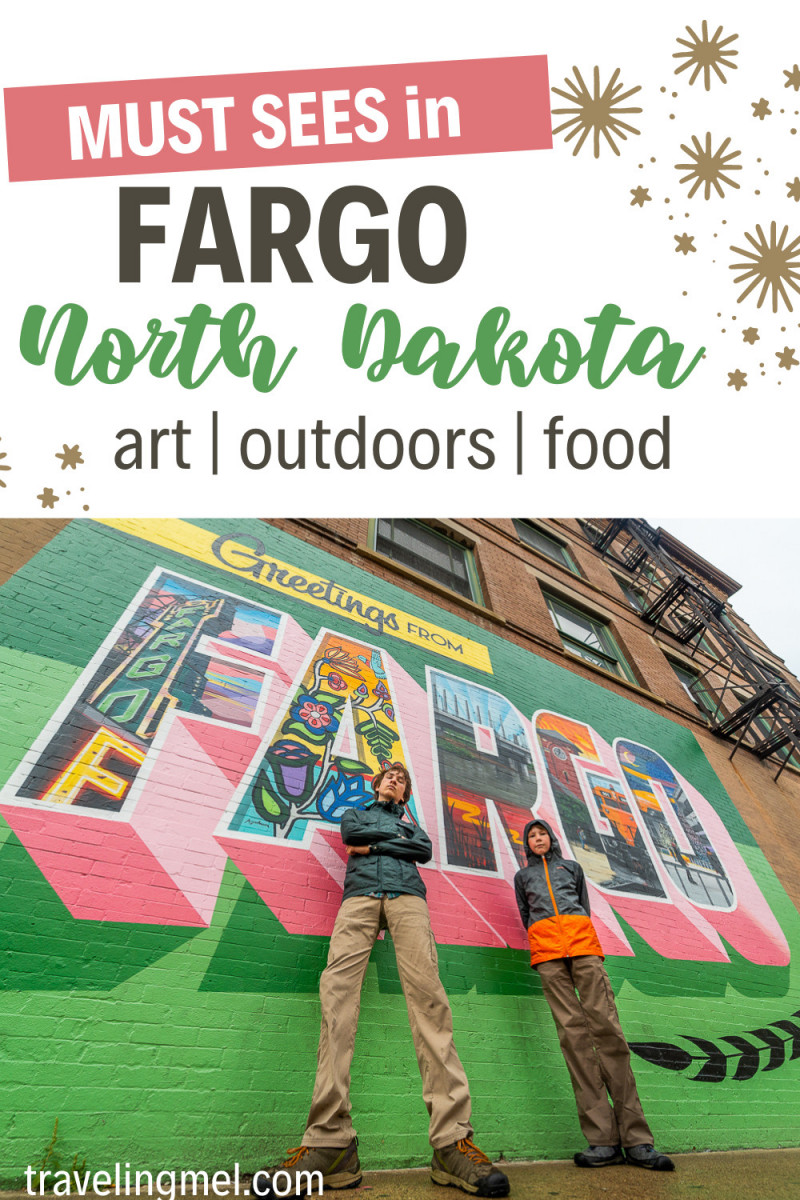 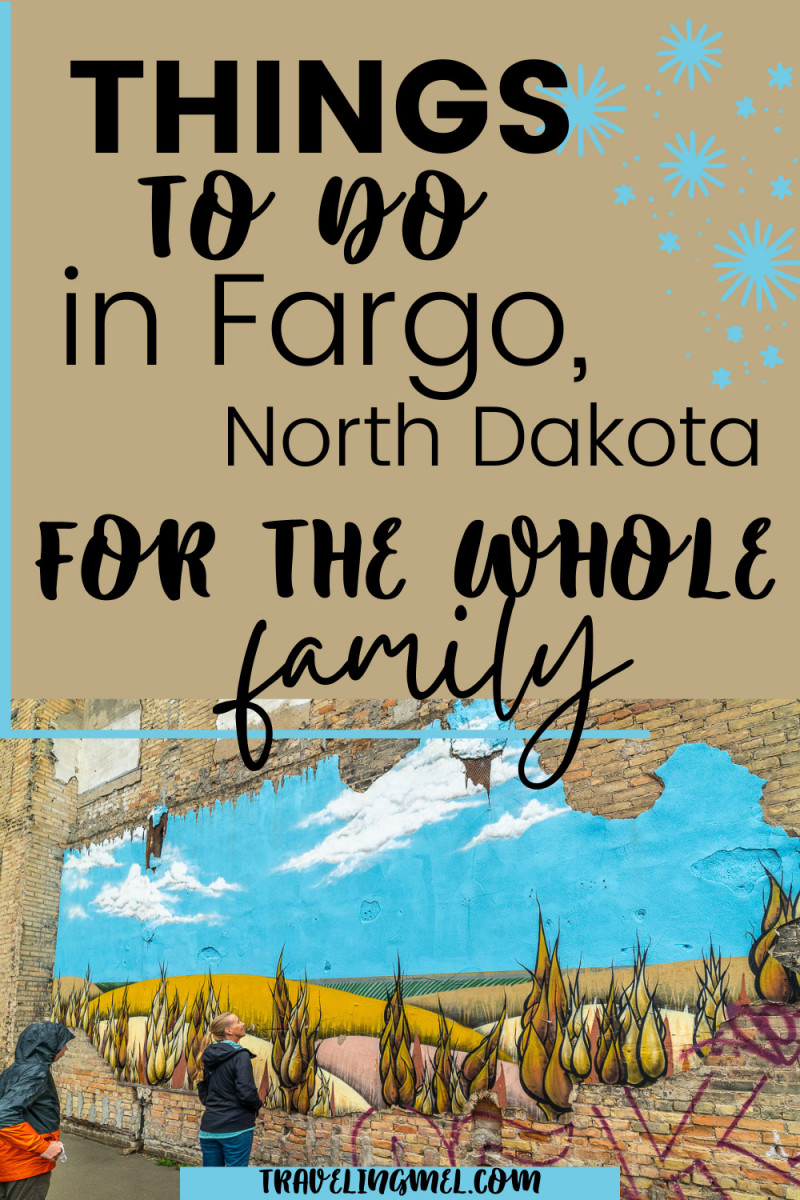