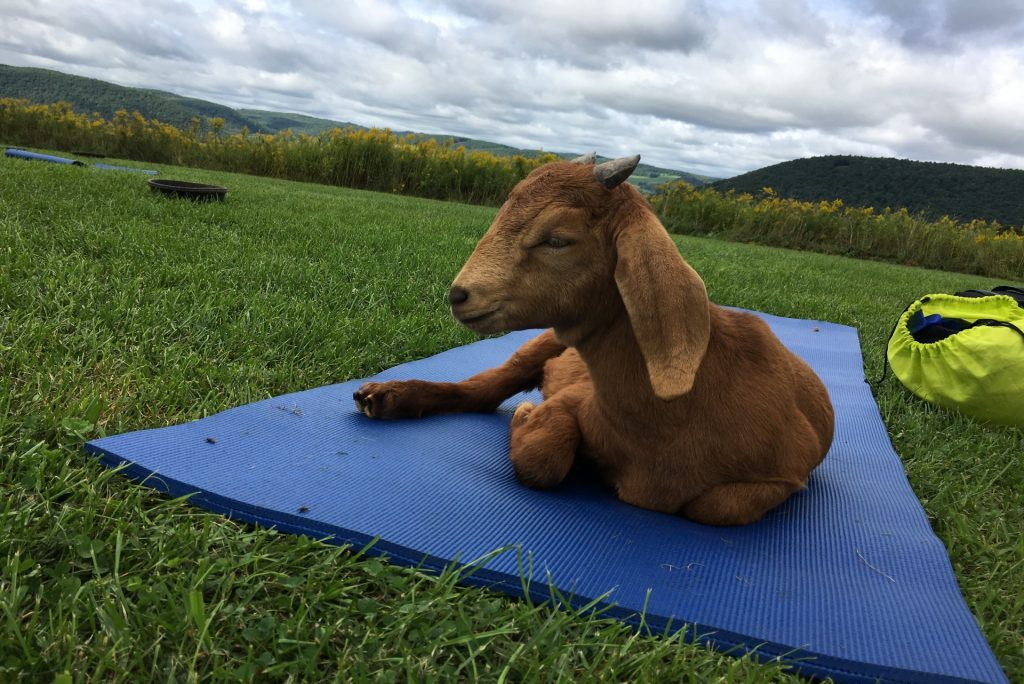 I’m in a beautiful mowed field in Triangle pose, gazing at a field of yellow flowers when a goat bumps into my leg. I smile, pet the goat, regain my balance, and flow into Warrior I. I am doing yoga with goats.

I had heard about goat yoga and thought it sounded kind of silly, but also fun. Who doesn’t love adorable goats? When I saw it was offered as a pre-conference tour for Travel Bloggers Exchange (TBEX) conference in Finger Lakes I decided to sign up.

I’ve tried Snowga (yoga on snowshoes), and SUP yoga (yoga on a paddleboard), so why not goat yoga? It’s one more novelty yoga class that could be genius or just ridiculous. (Next, I need to try brewery yoga – yup, yoga and beer!)

My group of ten goat-yoga-wannabes were shuttled to ZiegenVine Homestead in the southern Finger Lakes region of New York. When we got to the farm, I knew that I would be happy doing anything in their beautiful surroundings. A historic barn hosts goat yoga on rainy days, but we were fortunate enough to get a break in the weather and do our yoga outside.

The mowed lawn was surrounded by fields of goldenrod in bloom. From our perch atop the hill, we could see tree-covered hills rolling out in all directions. The goats followed us up to the clearing; this obviously wasn’t their first yoga class. 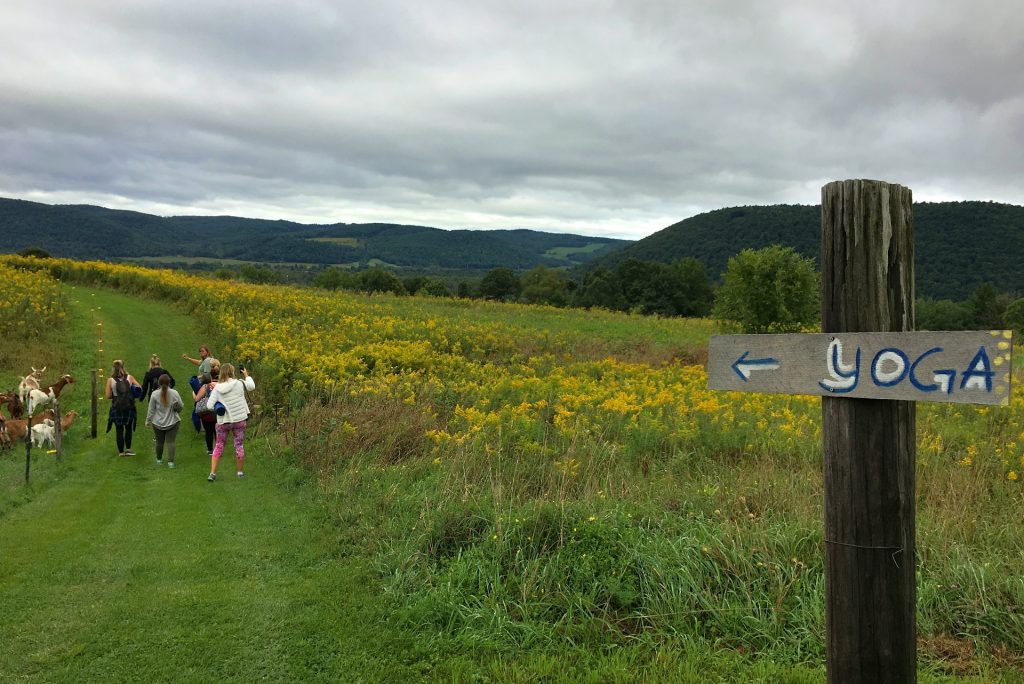 What is Goat Yoga?

It’s not goats doing yoga or a new goat pose yoga gurus are touting, goat yoga is simply doing regular yoga with goats. Some places have baby goat yoga, but at ZieganVine Homestead there were goats of all ages.

When you see goat yoga videos or photos, there are often goats on people’s backs as they try to hold yoga postures. Often, someone is putting food there to encourage the goats to jump or climb on the participants. At ZiegenVine Homestead, the goats are ranging freely in the mowed lawn area. Allison Lavine, who owns the farm with her husband Randy Ziegenhagen, walks around dropping food on the yoga mats and cleaning up whatever the goats drop on the mats in return.

Why Do Yoga With Goats?

Are you asking yourself, “what’s the point of doing yoga with goats?” Basically, it’s fun. You probably aren’t going to Zen out like you might in a non-goat yoga class, but you might smile and laugh more. Fans of goat yoga, and there are a lot – many classes sell out, say doing yoga around goats helps us take ourselves less seriously.

Our instructor, Elizabeth Moses, described goat yoga as a “weird mix of reverence and irreverence.

“There isn’t anything in yoga doctrine that says you have to do yoga separate from nature. The novelty is freeing. You can come in and out of the postures. It’s a joyful experience.” 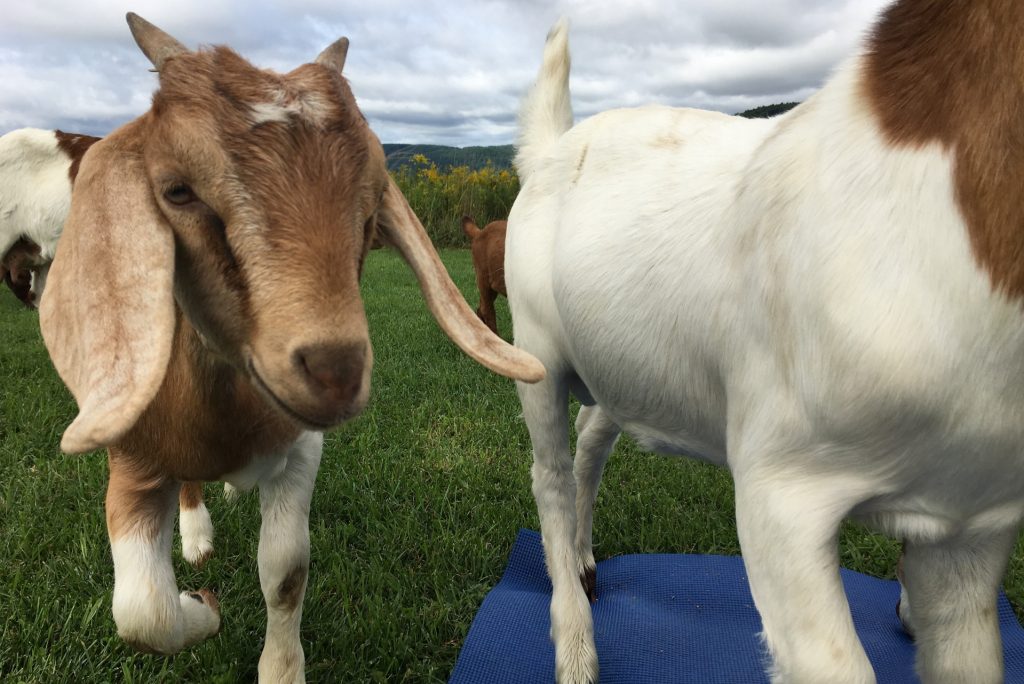 There is some debate about who the originator of goat yoga really is. It could be Lainey Morse who created goat yoga in Oregon or April Gould of Goat Yoga Gilbert Arizona. From what I understand, there have been some legal battles to determine the rights to the name “Goat Yoga,” with the trademark folks determining that you can’t own “goat yoga” anymore than you can own “hot yoga.”

Morse’s Oregon goat yoga is now “Original Goat Yoga.” She started it on her farm when someone who attended a kid’s birthday party suggested it. It grew like crazy and you can read all about it in this CNBC article. You can still do her goat yoga in Albany, Oregon as well as other locations around the state and country.

Goat Yoga Gilbert, Arizona writes on their website, “Arizona Goat Yoga, LLC was the first to have certified trained yoga goats. Co-owner April Gould started teaching her goats to do yoga, and various exercises, for a feature on NBC’s hit TV show- American Ninja Warrior, 2015. This quirky concept exploded into the “Goat Yoga Craze,” we now see today, and remains the largest, longest-running Goat Yoga in the world.”

Levine of ZiegenVine Homestead said, “I don’t know who created it, but I am glad they did.”

I am also glad someone came up with this zany idea. I can’t imagine anyone uses this as a serious practice, but to add it to a “regular” practice is a lot of fun. It brings joy and the unexpected to yoga. While I wasn’t focused inward, I was “in the moment.” And I was snuggling with goats. 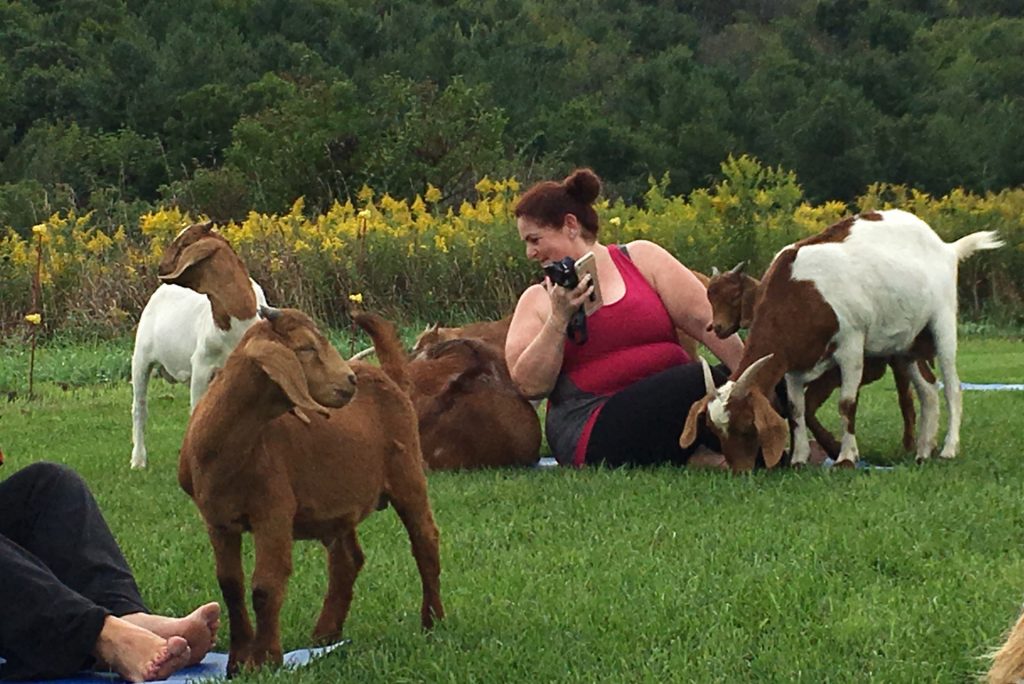 Yes. With a caveat. They are livestock and they do step and jump on you. Levine told us that no one has ever gotten hurt in her goat yoga classes. The goats we did yoga with were really friendly, much like dogs. I’m sure there is some case somewhere where someone got hurt, but it isn’t any more dangerous than yoga on a paddleboard or visiting goats at a petting zoo.

At ZiegenVine Homestead they leave the horns on the goats. Some places remove the horns. Since Levine’s goats live outside in the mountains, she hates to take away their opportunity to protect themselves should a predator stroll onto the farm. 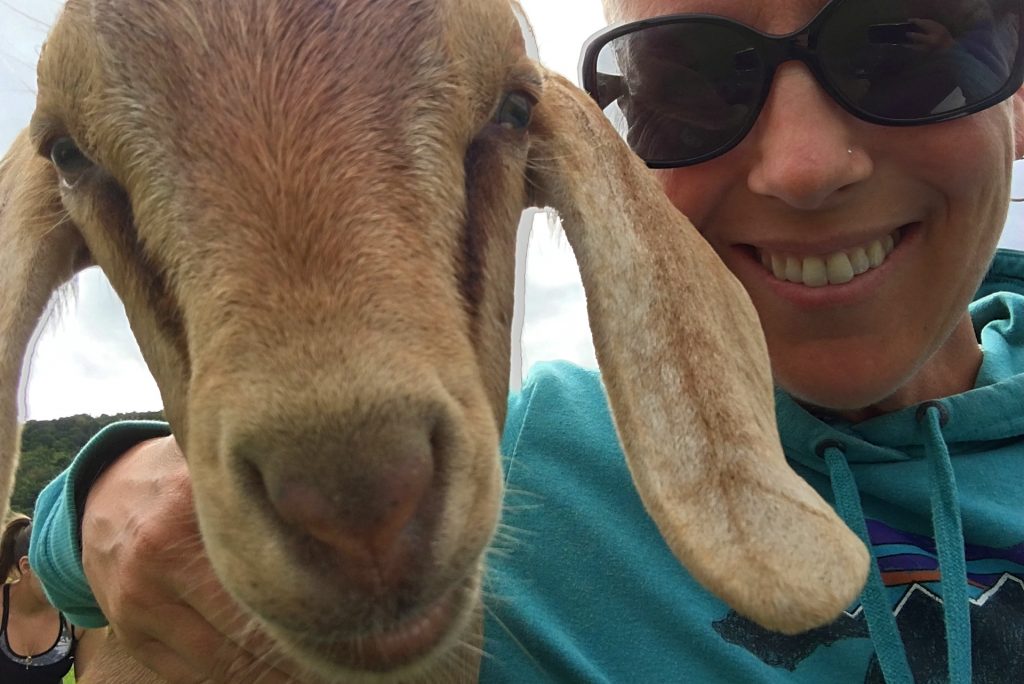 Goat Yoga on the Homestead

I loved my goat yoga class at ZiegenVine Homestead in Savona, New York.

For goat yoga Oregon, try Original Goat Yoga. They also have classes in California, Illinois, Kentucky, New York, Michigan, Oregon, and Pennsylvania. Find their locations here. They even have goat yoga with wine (that seems like a little much, doesn’t it? Maybe just goats and wine would be enough).

Other Goat Yoga Classes in the United States

How Much Does Goat Yoga Cost?

Like any yoga class, prices for a goat class vary depending where you go. I saw prices ranging from $12-$24 and heard rumors of them costing as much as $35. It’s not inexpensive, but the price of the class usually goes back to raising and caring for the goats.

Can’t find a goat yoga class near you? Get a goat yoga shirt instead. Or wear one to your next class to show the goats how much you care.

See other goat shirts on Amazon. 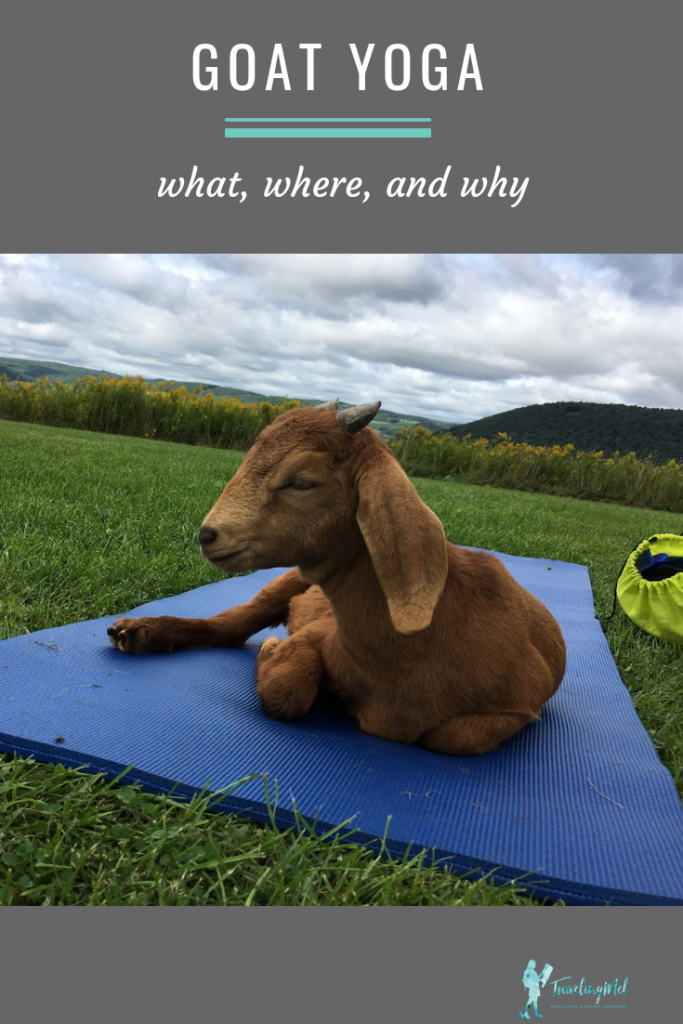 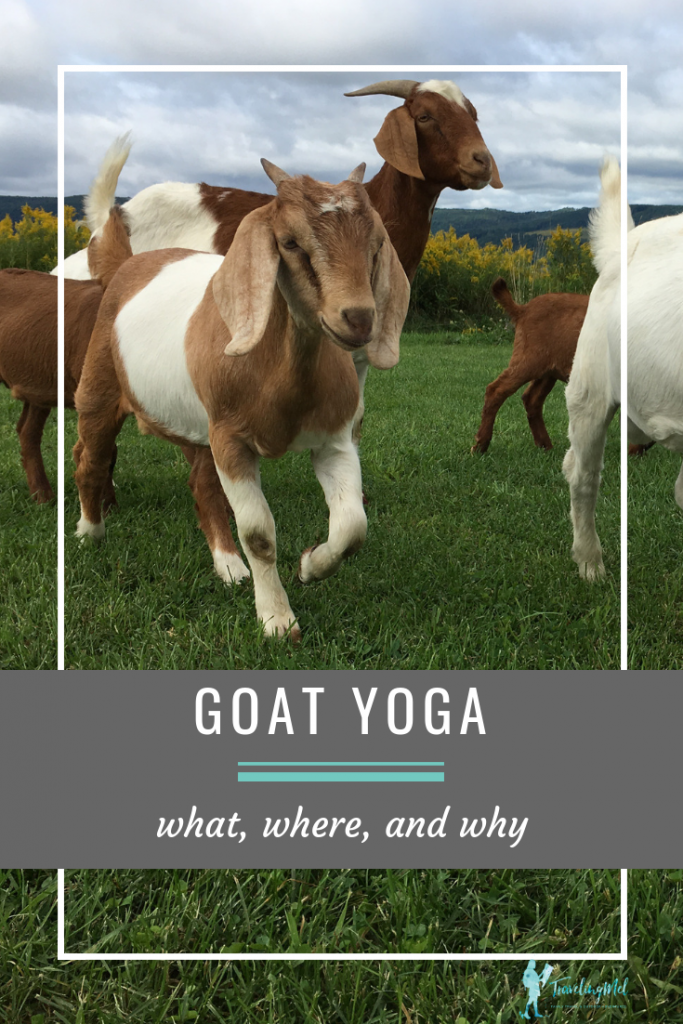 6 thoughts on “Goat Yoga: Should You Try It?”