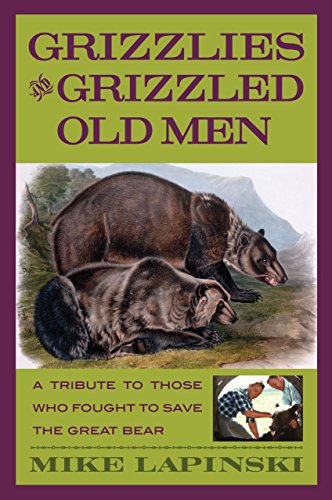 Grizzly bears have always been contentious, portrayed as man-killers and livestock-raiders; the embodiment of cruelty to some and wildness to others. Its apropos that at a time when courts are struggling with the legality of delisting the great bear from the Federal Endangered Species list, Mike Lapinski would write his book, Grizzlies and Grizzled Old Men, chronicling the hard times grizzly bears have faced since Europeans arrived on this continent and the stories of men and women who fought to keep the bruin in existence.

Lapinski illustrates the lives of the men, such as Grizzly Adams and Theodore Roosevelt who started out as bear hunters and killers, but ended up respecting bears. He chronicles lesser known men and well-known researchers, all of whom have impacted the grizzlies survival. Men, whose hearts and spirits burned with an unquenchable fire to preserve this great lumbering beast. Thanks to them, the flame of conservation and preservation of the grizzly glows brightly today.

This history of bruin supporters wraps up with stories of the current work of bear biologists and advocates. Carrie Hunt peppers bears with rubber bullets and harasses them with Karelian bear dogs in an effort to adversely condition bears to stay away from human development, while Chuck Bartlebaugh educates the public on enjoying bears safely and responsibly.

In the end, Lapinski repeats a phrase from Doug Peacockself-proclaimed anarchist and grizzly bear proponent, Just leave the @#%$& grizzlies alone! And he encourages us to do the same. Whether or not the bear is delisted, enjoy the woods, protect bear habitat, carry bear spray and perhaps the grizzly bear will be around in another two hundred years.