We are lucky in Montana to have so many beautiful places to recreate and learn. This guide to the best Montana State Parks will cover some of those places, but there are so many more I encourage you to get out and explore.

I have not been to every Montana State Park – there are 55 state parks in Montana! I’d love to see them all and I am slowing making that happen. Visiting state parks is one of the best things to do in Montana. I am not listing every state park I have visited, so get in touch if you want to know more or have specific questions. 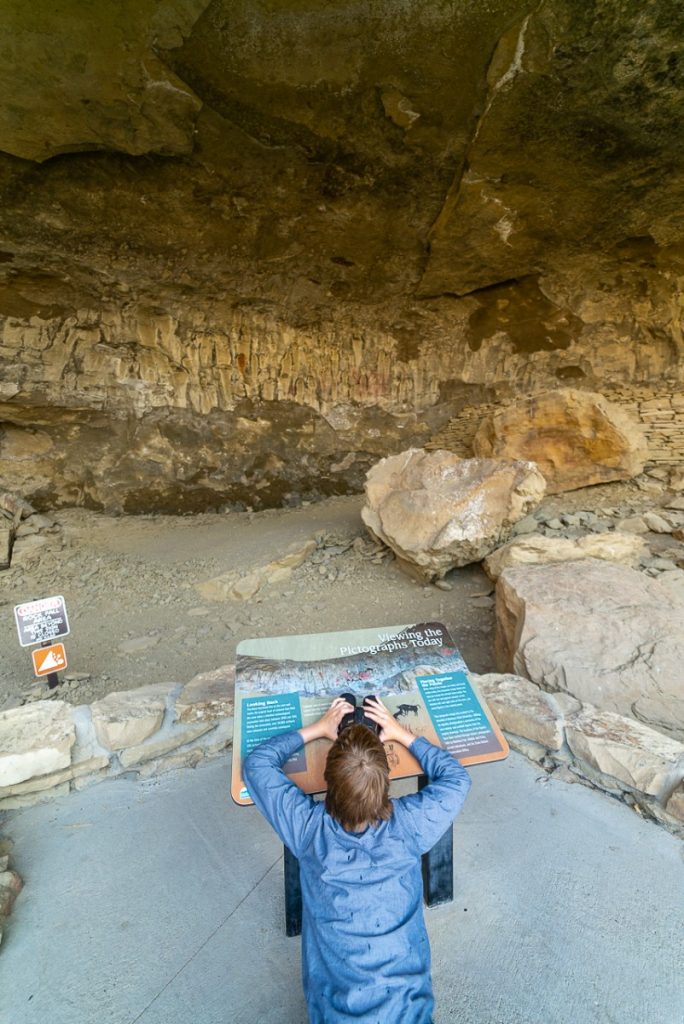 It’s hard to choose the best state parks in Montana, because they are all interesting in their own way. Some, like Chief Plenty Coups and Pictograph state parks preserve the history of the tribes who lived and live in Montana. Others, like Smith River and Sluice Boxes state parks are used for recreation and scenic beauty.

How Much Does it Cost to Visit Montana State Parks

Visiting the best parks in Montana is free for Montana residents who pay the $9 state park fee with their car registration.

For non-residents and those who opt out of the fee when registering their vehicle, it’s:

Get your annual Montana State Park pass online and the 7-day pass at the park you are visiting. 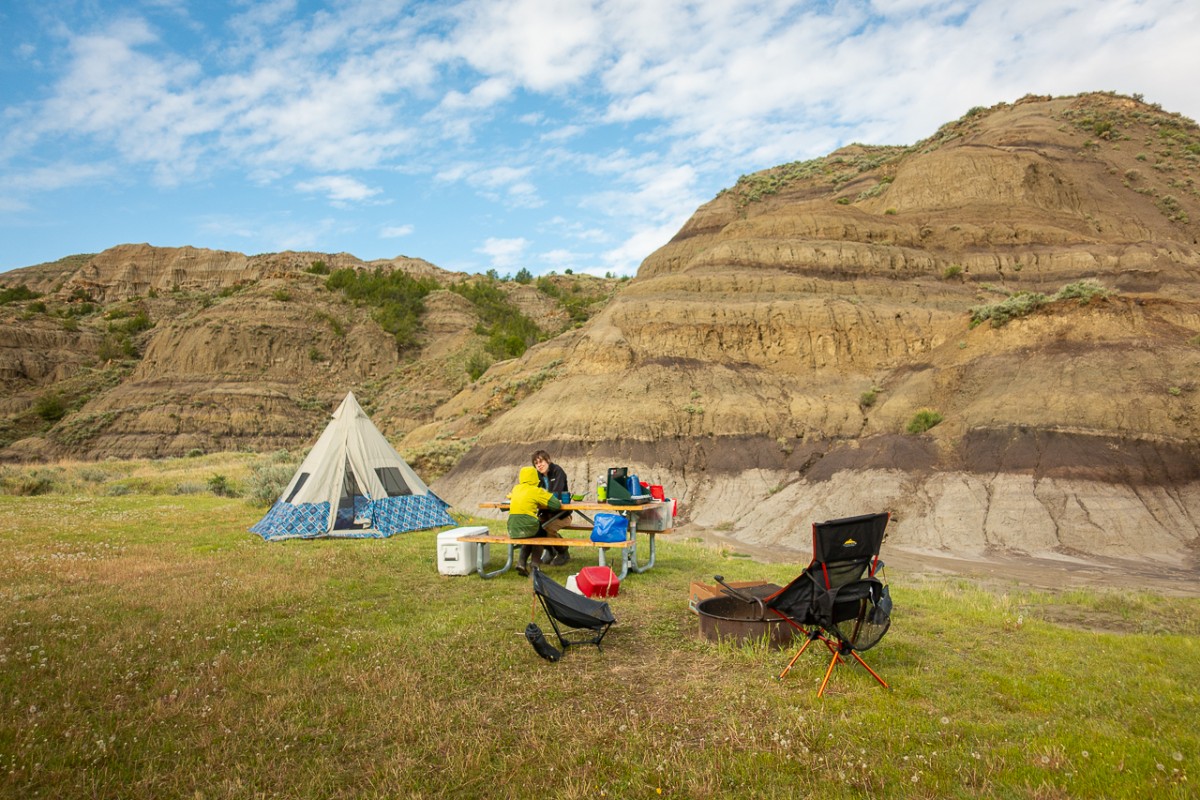 Many of the Montana State Parks have campgrounds. Some have electricity others have backcountry sites (Sluice Boxes State Park and Makoshika State Park).

Check the individual state park you plan to visit for camping options. Many of the Montana state campgrounds also offer interpretive programs in the summer.

Montana WILD in Helena is essentially the visitor center for Montana Fish, Wildlife & Parks. The exhibit hall is filled with plants, animals, and ecosystems that make up our wild state. 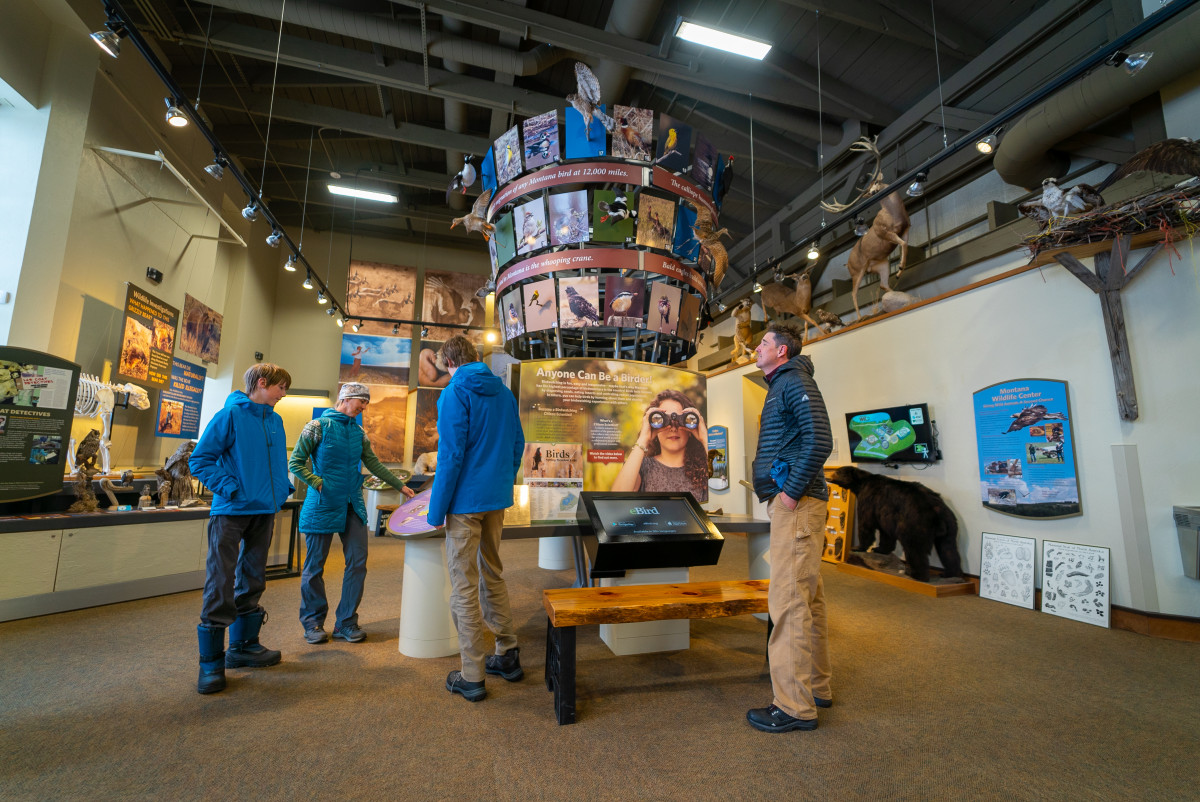 Montana WILD also offers education and conservation programs for schools, youth groups, and the public both in person and virtually.

Our homeschool group participated in a program during the winter and learned about animal adaptations and met an ambassador owl.

Read more about our visit to Montana WILD and how you can plan your own.

If you are looking for some cultural history to go along with your natural history, don’t miss the impressive First Peoples Buffalo Jump State Park. 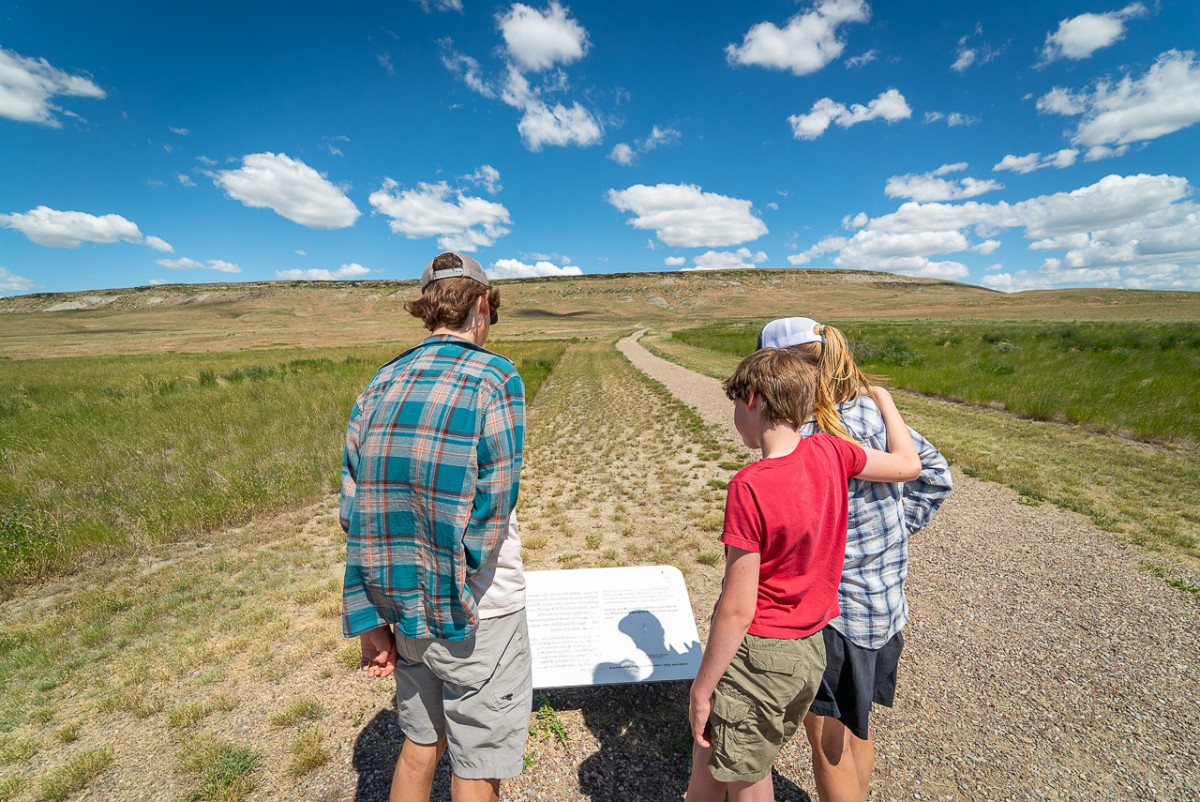 The mile-long cliff face is probably the largest buffalo jump in the country. Thirteen tribes used the jump for more than 1,000 years before the arrival of Lewis and Clark in 1805.

There are several hiking trails, interpretive signs, a rich visitor center, and the jump itself. In summer, State Park Rangers offer hourly talks explaining who used the jump and how they used it.

First Peoples Buffalo Jump State Park is one of three State Parks near Great Falls that you can explore on the same visit. 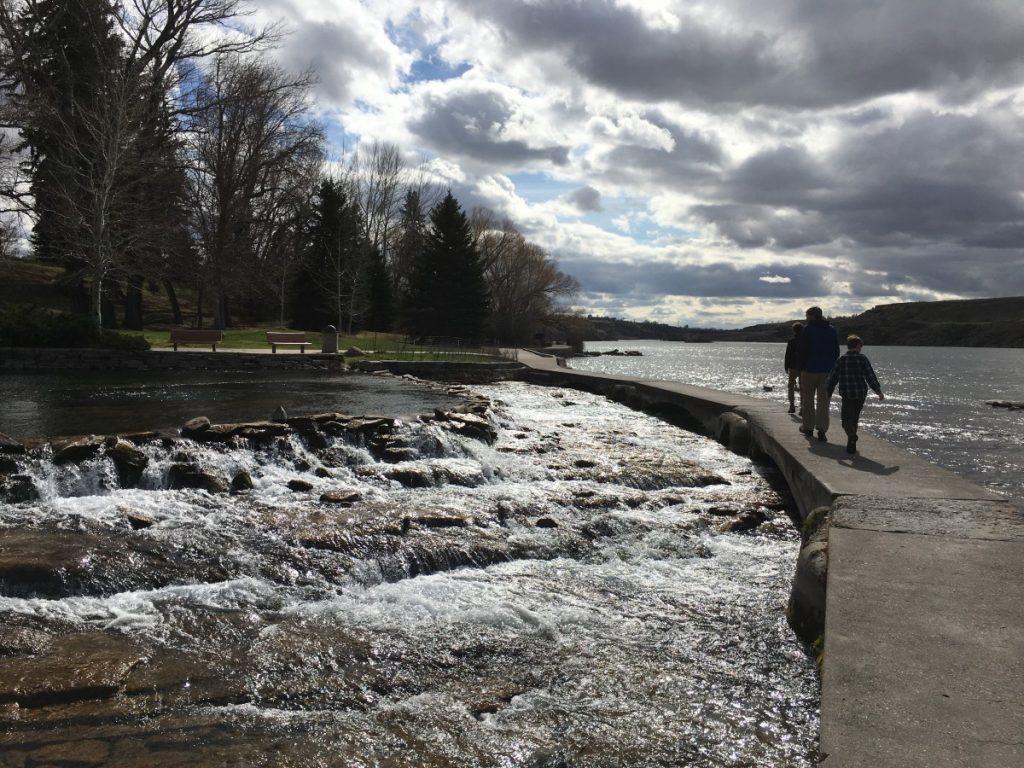 Giant Springs State Park is on the banks of the Missouri River in Great Falls. It’s one of the largest freshwater springs in the country and it was recorded by Lewis and Clark.

The park stretches for 14-miles along the shoreline of the Missouri River and is a great spot for fishing, birdwatching, and walking. Mountain bike and paved bike trails run along both sides of the river. Or make it part of a tour of Lewis and Clarks’ route through Montana and see more parks related to Lewis and Clark below. 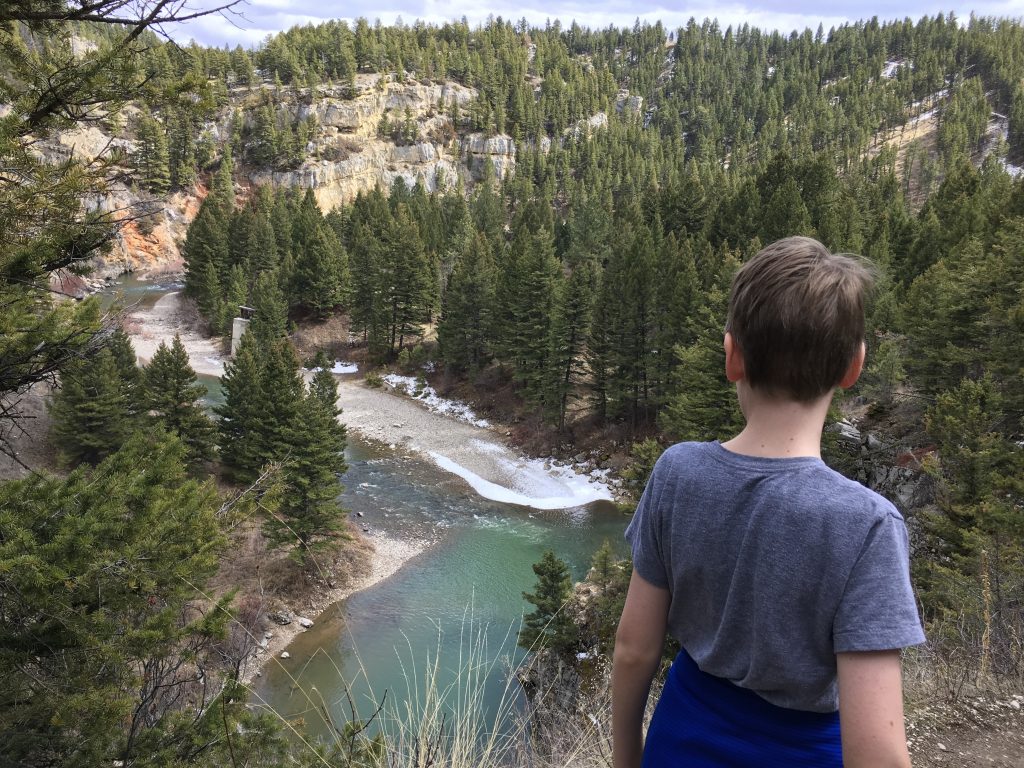 If the name didn’t tip you off, along the way you will see old mining equipment that tells the tale of bygone days.

Sluice Boxes State Park made my list of best hiking trails in Montana and was part of a trip to three Montana State Parks near Great Falls.

See some of our favorite trails to explore on foot and bicycle.

Smith River State Park is a little different than other MT State Parks in that you need a permit to visit most of it. The Smith River is a remote river that winds through limestone canyons, past farm fields, and is filled with trout. 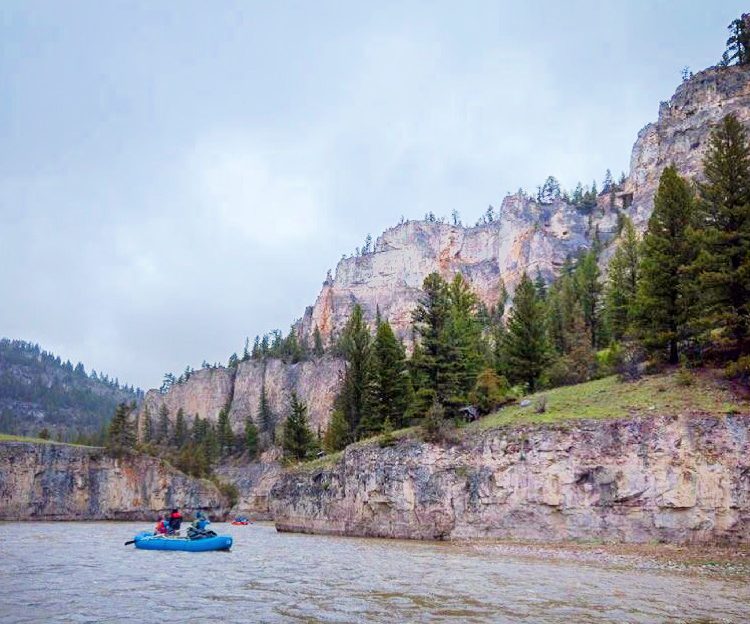 It takes 3-4 days to float the Smith and there aren’t any take-outs in the 59-mile stretch between Camp Baker and Eden Bridge. You can hang out at Camp Baker and fish or watch the river flow without a permit.

We’ve floated the Smith once and it rained the whole time. But even through the sheets of rain and gray clouds, we could see the beauty and look forward to another attempt.

Permits and fees are required to float the 59-mile section. Permits are issued annually through a lottery. You can enter the lottery between early January and February 15. Permittees are announced about a week or two after that. Apply for a Smith River permit here.

Henry wrote a post that has everything you need to plan your Smith River Trip. 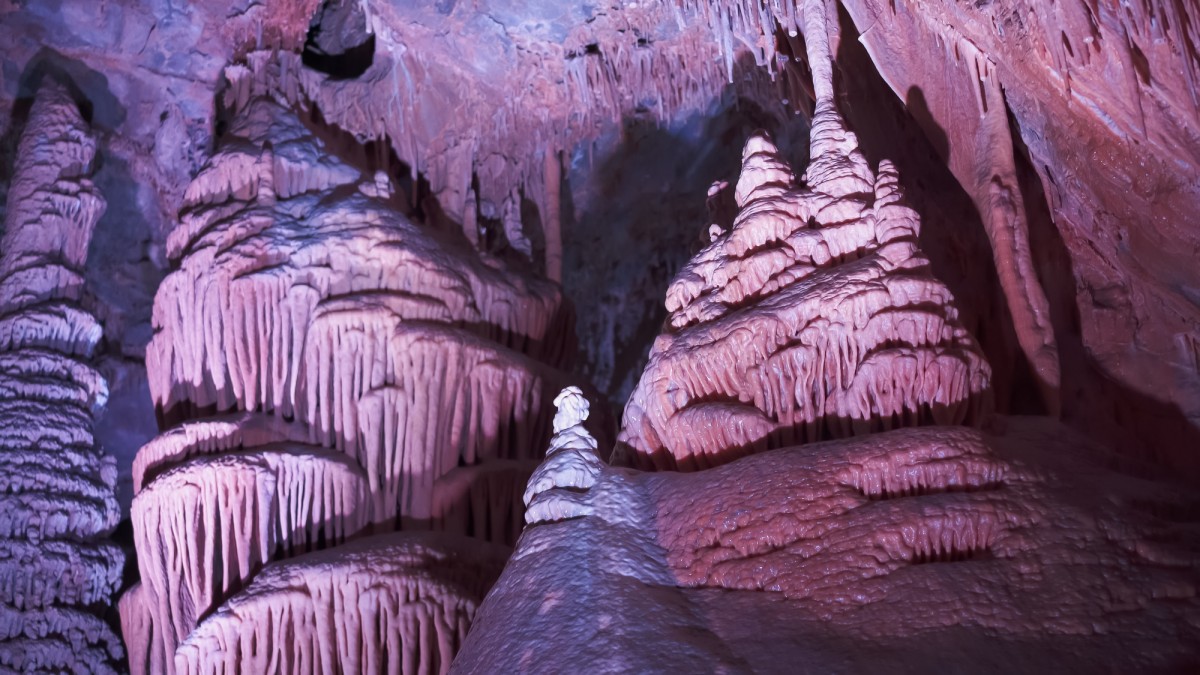 Lewis and Clark Caverns is one of the most highly decorated caves in North America. It’s filled with stalactites, stalagmites, columns, soda straws, and other formations. In addition to the cave, which you must visit on a tour, there are trails to hike and bike. This is a great park to camp in, too. 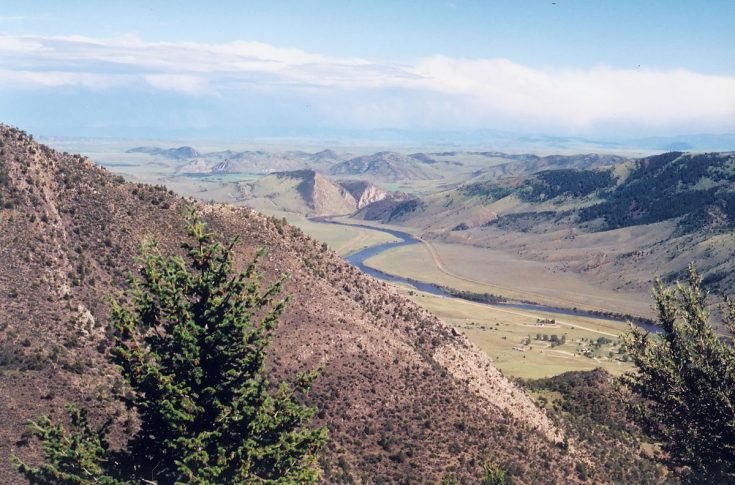 There are also miles of trails to hike and bike and plenty of campsites to spend the night.

We’ve visited Bannack State Park in both summer and winter and both experiences were wonderful in their own ways. In summer, the ghost town comes alive with visitors, tours, and living history. In winter, you can cross-country ski and snowshoe through the park and envision how tough it would be to live in Montana’s first territorial capital in the 1800s. 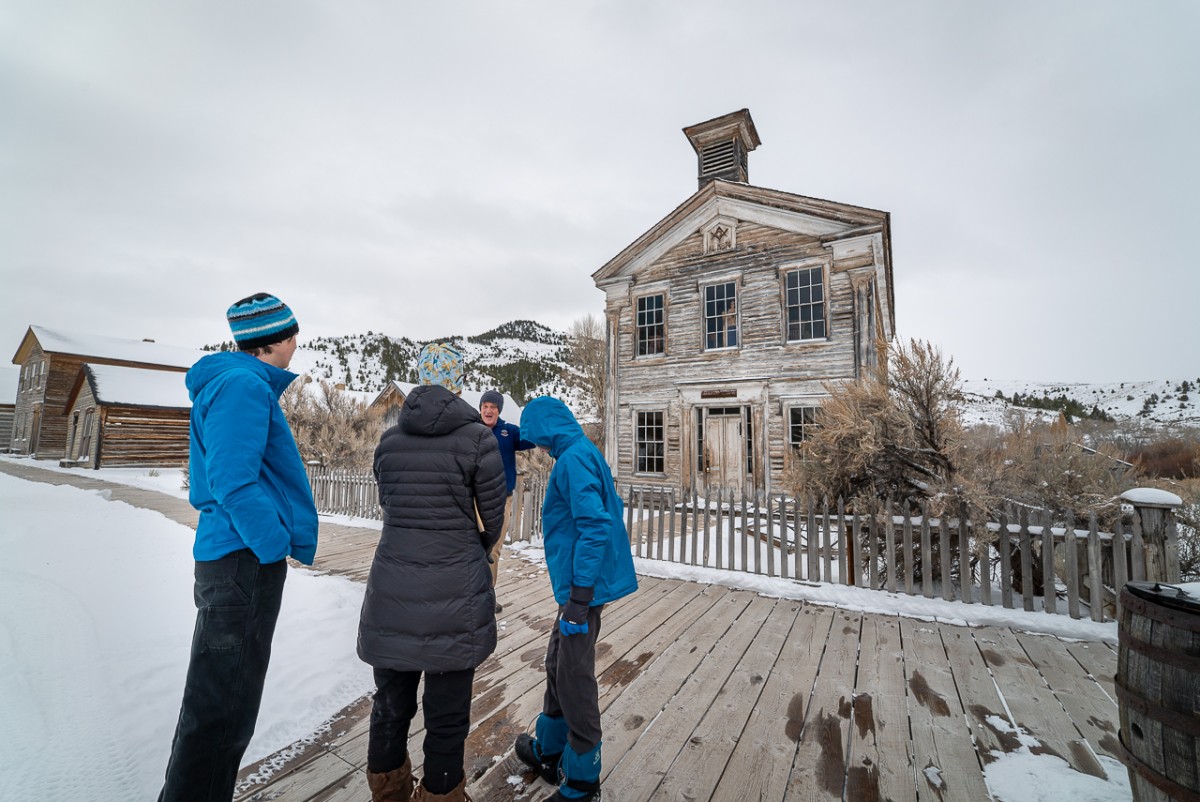 Bannack is the site of the first gold discovery in Montana, which spurred the state’s gold rush. It was the home of the Shoshone and Bannack people before that.

Whenever you visit, you can walk down the main street and see the old buildings. Grab an interpretive booklet ($2) to help understand what the buildings were used for and who the people that lived here were. Many of the buildings are unlocked and you are free to go inside. 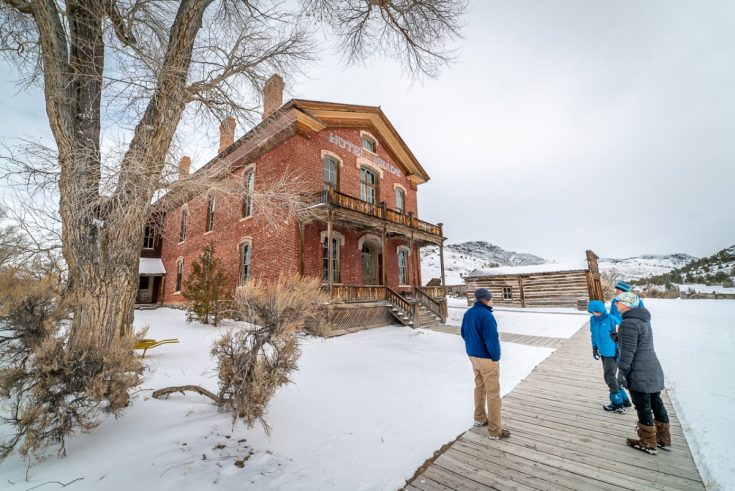 Visiting a few of Montana’s best state parks in winter is a magical and educational experience. It takes a little more preparation and self sufficiency to visit places like Bannack State Park and Lost Creek State Park in winter, but it’s worth it to experience these places without crowds and covered in a glistening blanket of snow.

While some Montana State Parks were designated for recreational or scenic reasons, Chief Plenty Coups State Park is a cultural resource. That’s not to say it isn’t pretty, because it is quite a lovely spot. Chief Plenty Coups was the last traditional chief of the Crow Indian tribe. He left his home as a museum where you can learn how his mysterious visions influenced his life. The spring, which Chief Plenty Coup saw in a vision as a child, is strewn with offerings. 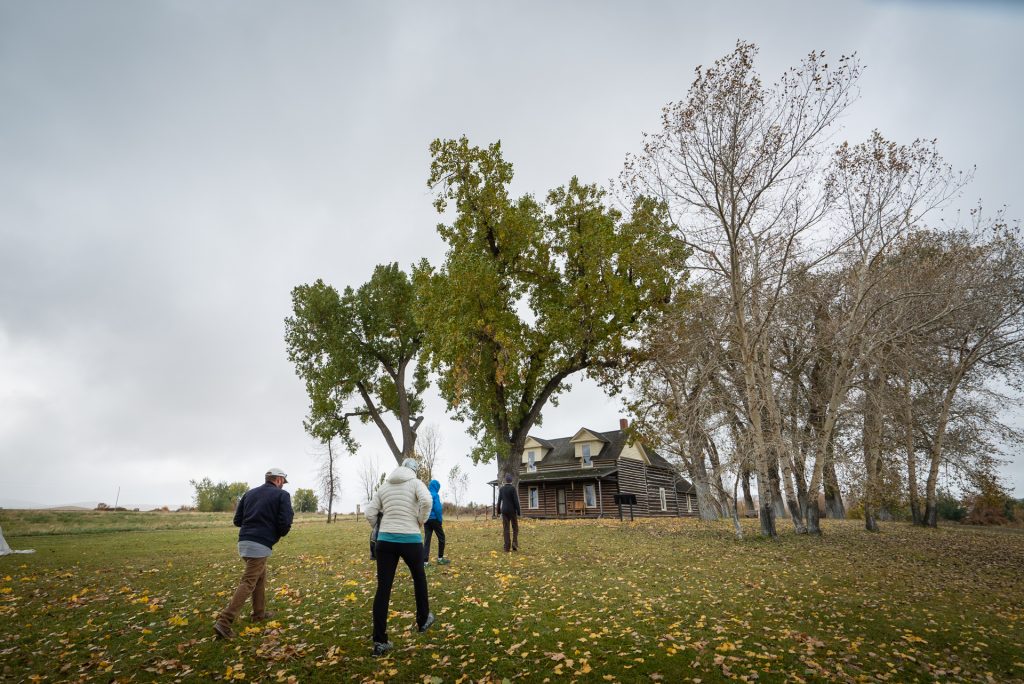 Chief Plenty Coups State Park is within the Crow Reservation and the Crow tribe uses this area for gatherings and heritage celebrations.

There is plenty of room to picnic, hike or play in the creek. The visitor center is well done.

A visit to Chief Plenty Coups State Park is an easy trip from Billings. 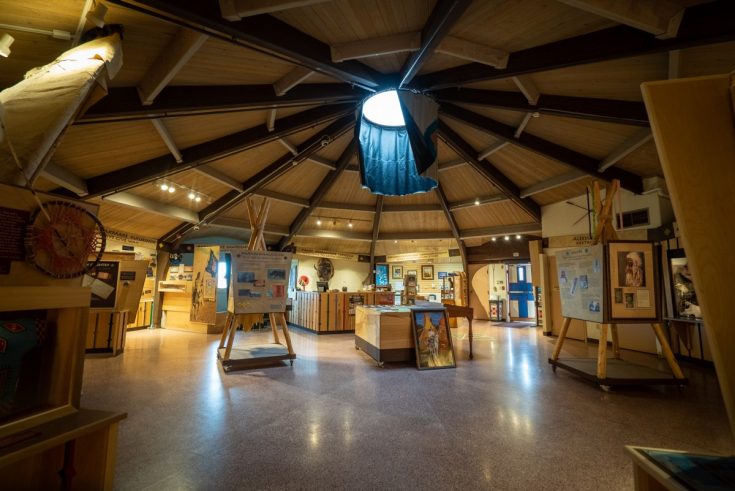 One of the interesting things to do while visiting Billings, is to take a day trip to Chief Plenty Coups State Park.

I’ve made several trips to Makoshika even though it is way out there in southeast Montana (or maybe because it is way out there). Our favorite trails are Diane Gabriel/Hadrosaur Trails to Sunset Point (dino fossils and great views), the Cap Rock Trails (a natural bridge and plenty of hoodoos), and the short walk to the Twin Sisters. 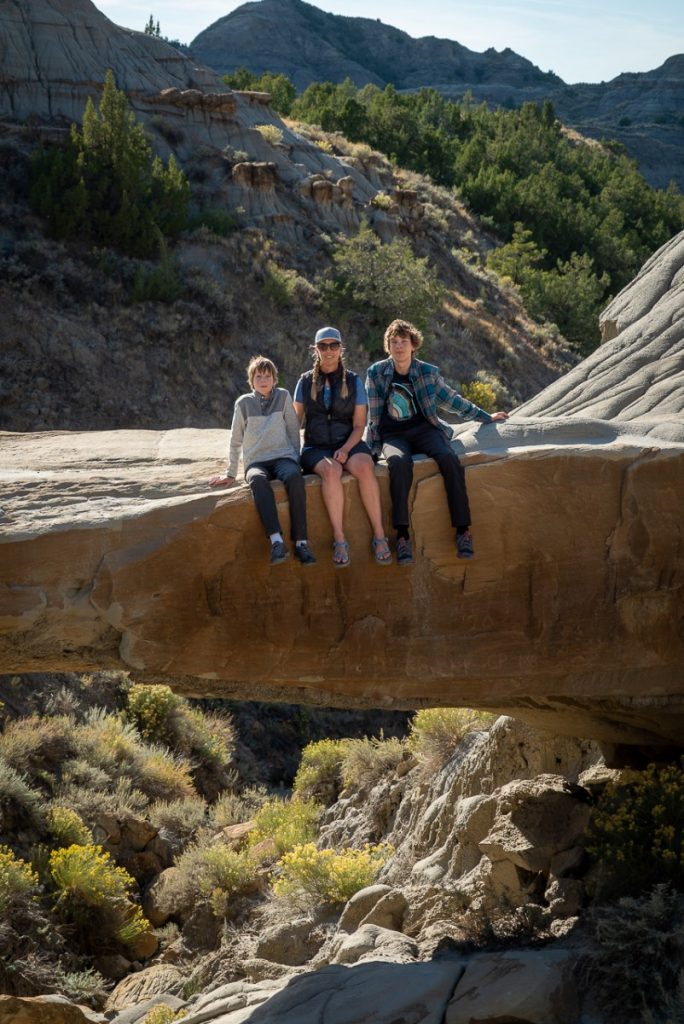 Makoshika State Park has reservable campsites, first come first serve sites, and backcountry or dispersed campsites. The visitor center has interesting displays and is a good place to begin a visit to get a better understanding of the park. They even have a disc golf course and you can borrow discs from the visitors center.

Makoshika was part of the territory of the Lakota people and its name is a variant spelling of a phrase meaning ‘bad land’ or ‘bad earth.’ 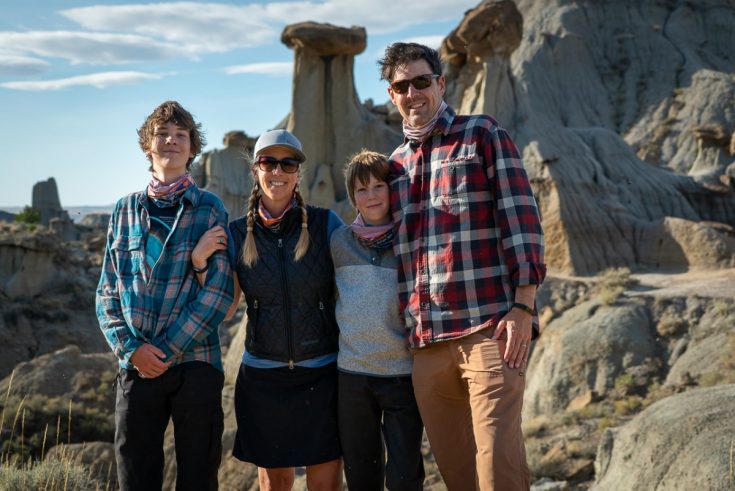 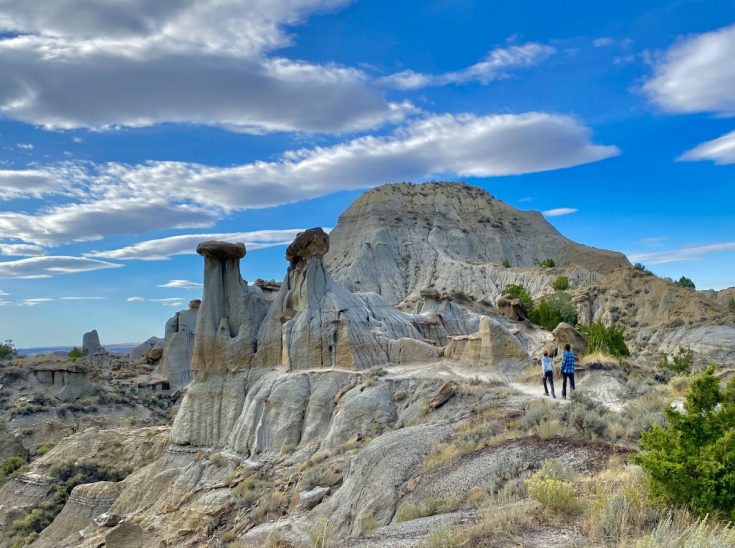 Minneapolis to Yellowstone road trip through Makoshika State Park and other parts of southeast Montana.

Like Makoshika, Medicine Rocks State Park is tucked away in southeast Montana and is full of interesting geological formations.

Theodore Roosevelt called Medicine Rocks, “As fantastically beautiful a place as I have ever seen.” The sandstone hoodoos are riddled with holes and interesting shapes. They are also covered by graffiti from all the people who have carved their names in them. 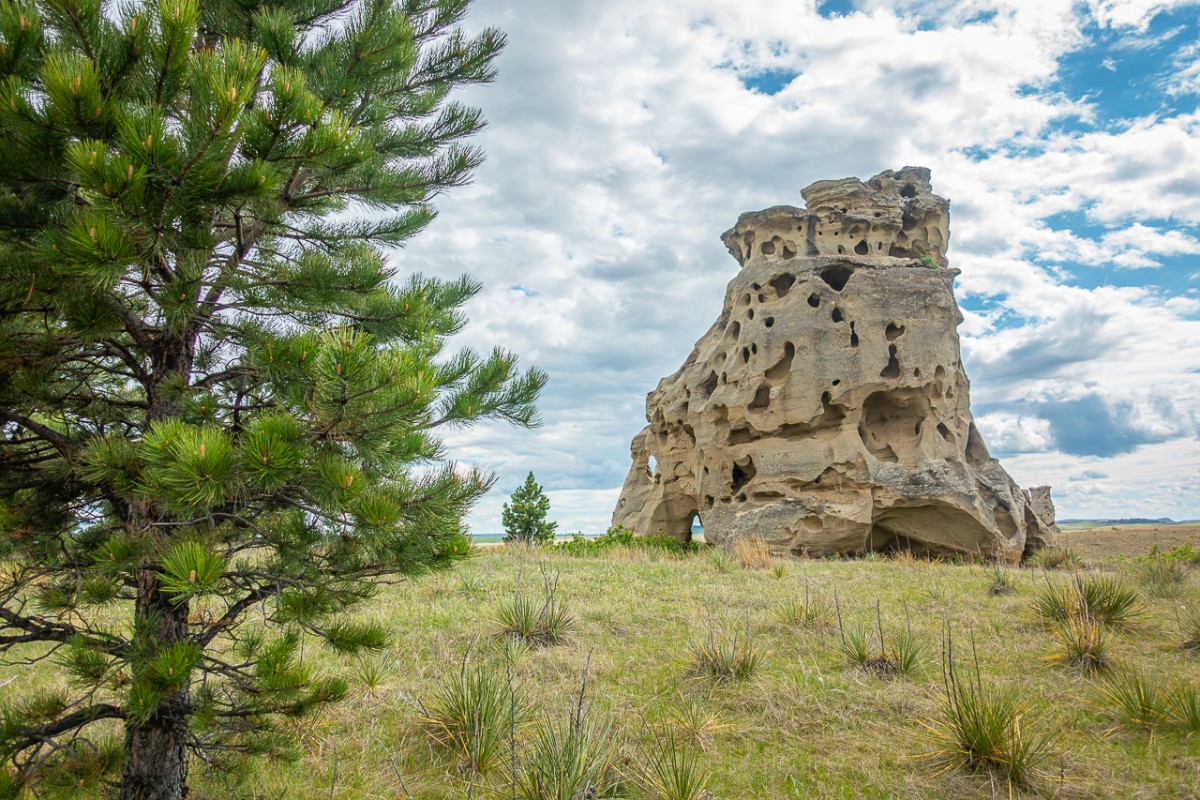 We like climbing the sandstone rock formations, walking the Sunset Loop and Dalton Trails, and watching the stars. If you have never seen a night totally free from light pollution, you will be blown away by the stargazing here.

There are few amenities in Medicine Rocks, but there are vault toilets, dispersed campsites, and a water pump at the entrance to the park. 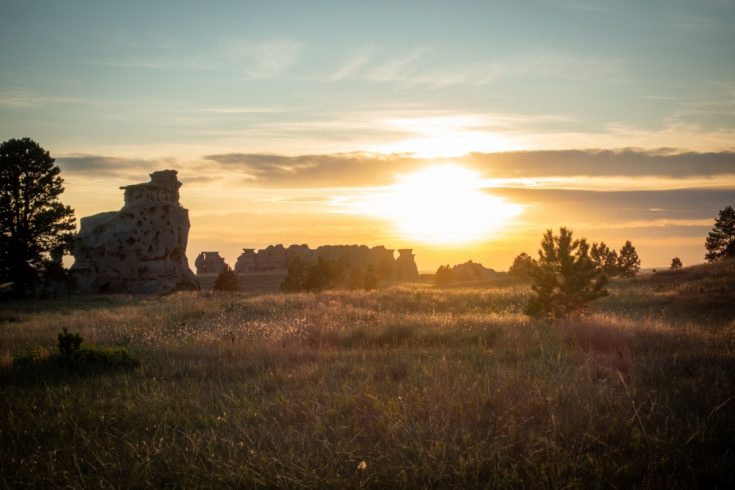 Rosebud Battlefield State Park is one of several battlefields in Montana where Indian War battles took place. The Battle of Rosebud may be the largest Indian battle fought in what became the American West.

Rosebud Battlefield is open for day use year-round, with picnic tables, vault toilets, and interpretive displays.

There are several trails to hike and you are free to wander throughout the park where there aren’t trails. Walk to the Kobold Buffalo Jump and up to the top of Crook’s Hill, then over to Conical Hill.

In winter, bring your snowshoes or cross-country skis to enjoy a very different experience at Rosebud Battlefield. 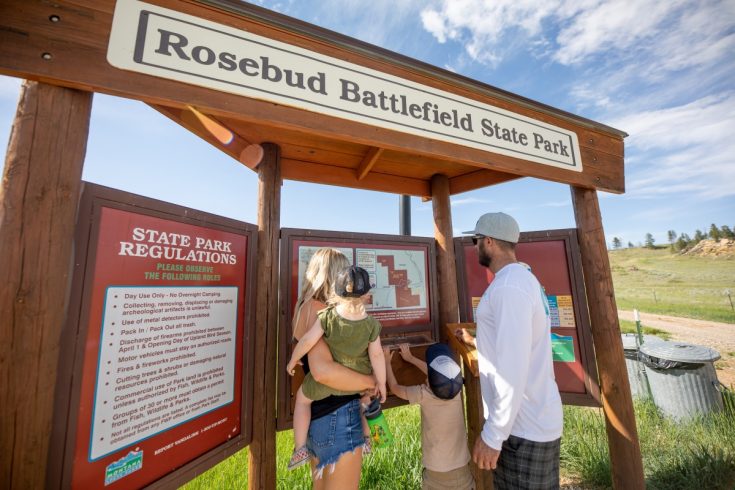 Rosebud Battlefield State Park is one of four battlefields in this article.

Several of Montana’s State Parks are related to Lewis and Clark and their Corps of Discovery. 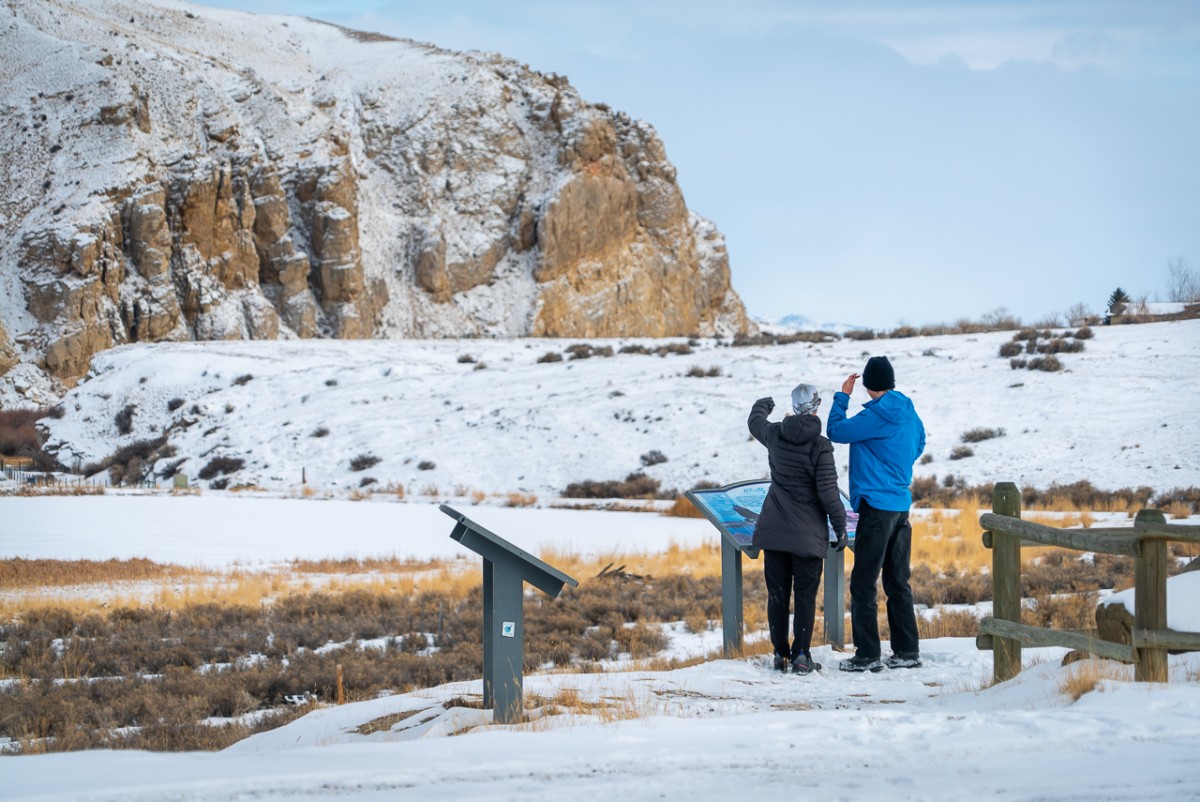 I have a post about Lewis and Clark sites, including several State Parks in Montana. 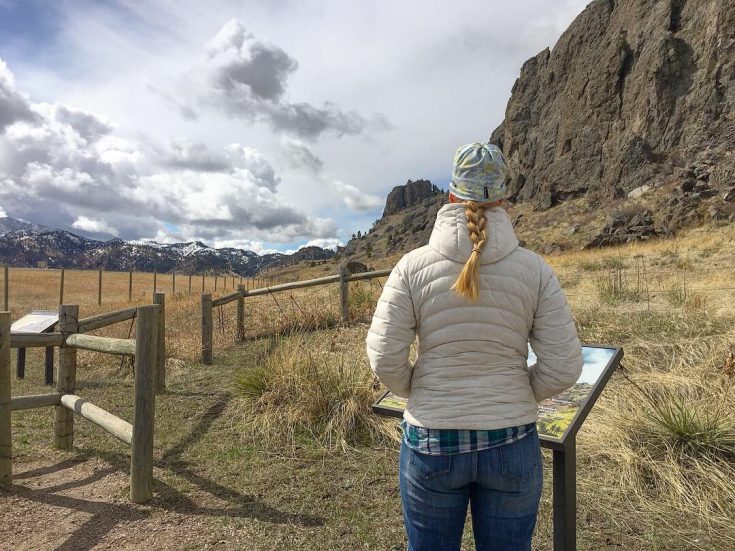 Lewis and Clark traveled through Montana in 1805 and 1806. Along the way they stopped at several places that have since become Montana State Parks.

These state parks include:

How many State Parks does Montana have?

There are 55 Montana State Parks.

How do I apply for a Smith River permit?

You can apply for a permit to float the Smith River in Montana on the Montana State Parks website between early January and mid-February.

What State Parks are in Montana?

Here is a list of State Parks in Montana – it’s a long one.

2 thoughts on “Guide to the Best Montana State Parks”