In February we joined friends for a couple nights at the Judith Guard Station in Central Montana. We love a good winter cabin adventure in Montana and this cabin seemed to fit the bill. The historic Forest Service cabin is nestled into the Little Belt Mountains southeast of Great Falls on the Helena–Lewis and Clark National Forest. 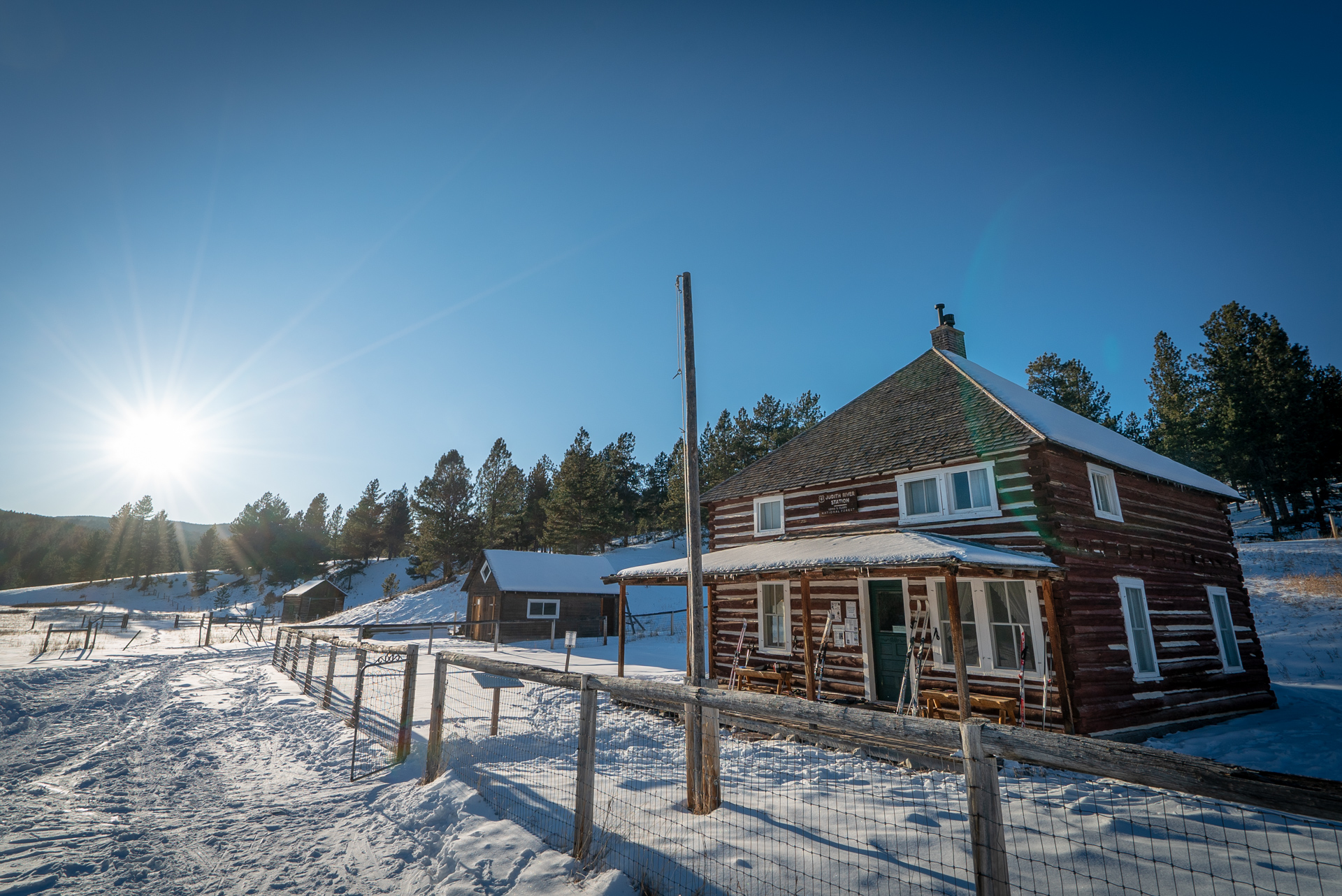 In the summer you can drive to the cabin (and the adjacent four-site campground), but in winter you should probably park about 0.05 miles away and walk or ski in. If you have a good four-wheel drive vehicle with decent clearance, and the snow is right, you can drive to the cabin any time. If you have a low-riding Subaru, you could get stuck. Watch the video to see what happened when I attempted the drive. Whoops!

After we dug out my car, we moved into the cabin. It’s been fully restored to its 1910 glamor. We were thrilled to find out there are propane stoves for heat both upstairs and downstairs, so the cabin was pretty warm. We still bundled up, but given that it was around 0-degrees Fahrenheit outside, it was comfortable. 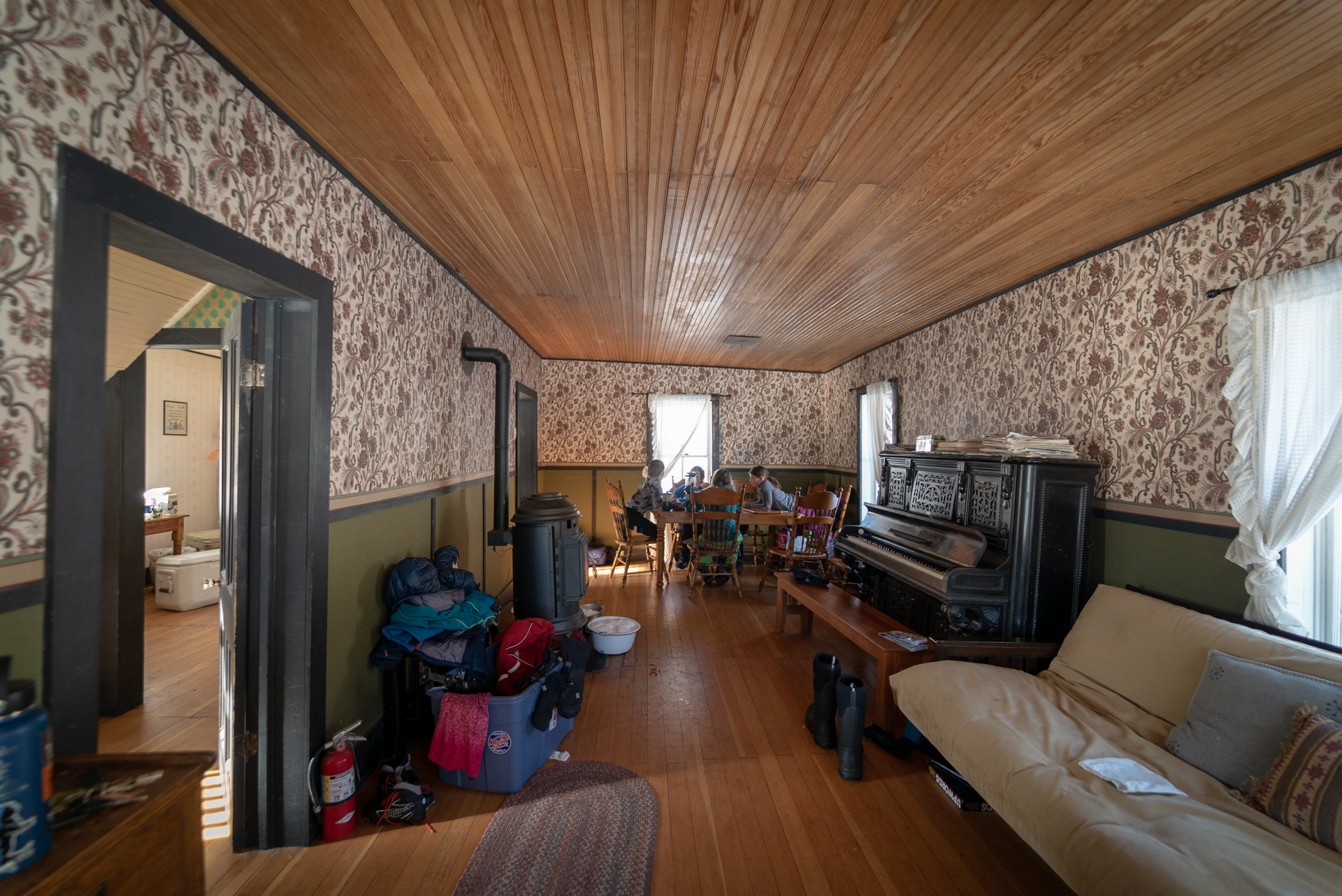 We love staying at Forest Service cabins in Montana. It’s an experience between camping and moteling. It makes it a little easier to keep warm on an outdoors-focused winter overnight. The best part about the Judith Guard Station is its location. Set in or on the edge of the Middle Fork Judith River Wilderness Study Area (WSA), there is a lot of wild-ish lands to explore.

In winter, cross-country skiing or snowshoeing is the best way to explore the area. In summer, there are trails for hiking and biking. Fishing in the river is still pretty good and you can’t beat the scenery. Bird watching and wildlife watching can be good year round.

Motorized travel is allowed on the existing roads (and there are kind of a lot). Check the Forest Service travel plan map for more on where you can do what. 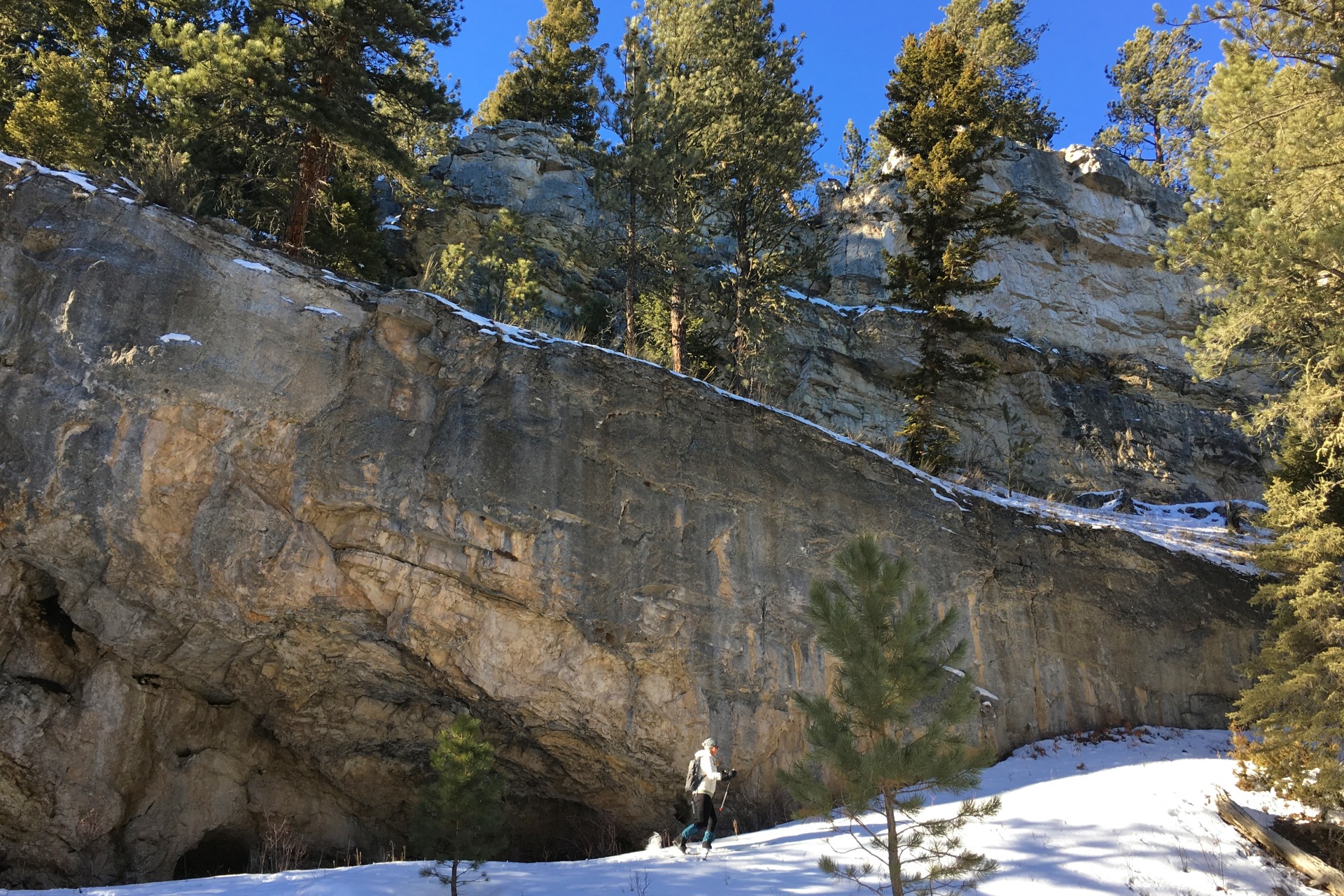 The idea is that someone is studying the area to see if Congress should designate it as Wilderness, but it seems to me these areas often just stay WSAs. Our Senator, Steve Daines, wants to remove protection from five of Montana’s WSAs, including the Middle Fork Judith River.

Some of the problems facing the Middle Fork Judith River area include mining claims and damage to the streambed and fisheries from ATVs and other off road vehicles crossing the stream on the road that runs up the canyon. I believe there has been restoration work and the fishery is coming back.

In winter, in the middle of the week, we didn’t encounter anyone else during our time at the Judith cabin. It was quiet and felt wild. There is evidence of the many roads in the area, but it doesn’t seem so bad when they are covered in snow.

Skiing and Snowshoeing in the Little Belt Mountains 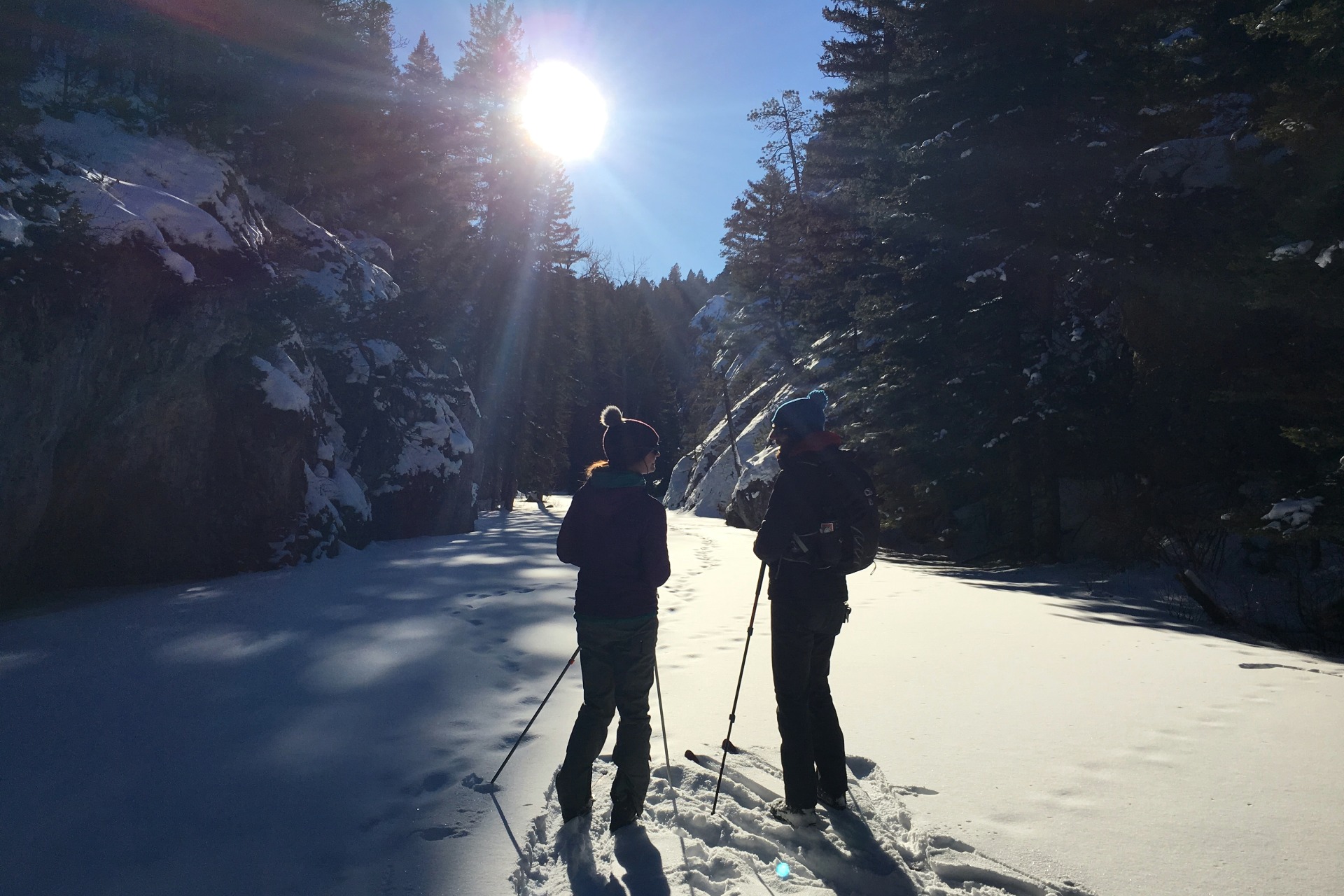 The first afternoon (after getting the vehicles to the cabin) we skied across the campground and followed some old roads or trails. We weren’t sure where we were going, but we had a great time exploring the forest. Erica, Mark, and I started the tour and then were joined by Finn, Clara, and Eva (Anders and Henry stayed home the first day since Anders was sick, and Emmett preferred to stay in the warm cabin.)

The next morning, Mark and I spent a few hours digging out the road so we could get my car back up. Fortunately, I had two little shovels in my car. I did wish they had longer handles, but we got the job done. With a little pushing by Mark, we got my Subaru up the road. He was able to drive his Sprinter van up with no problem. Erica skied with the kids and made sure they had a good morning. 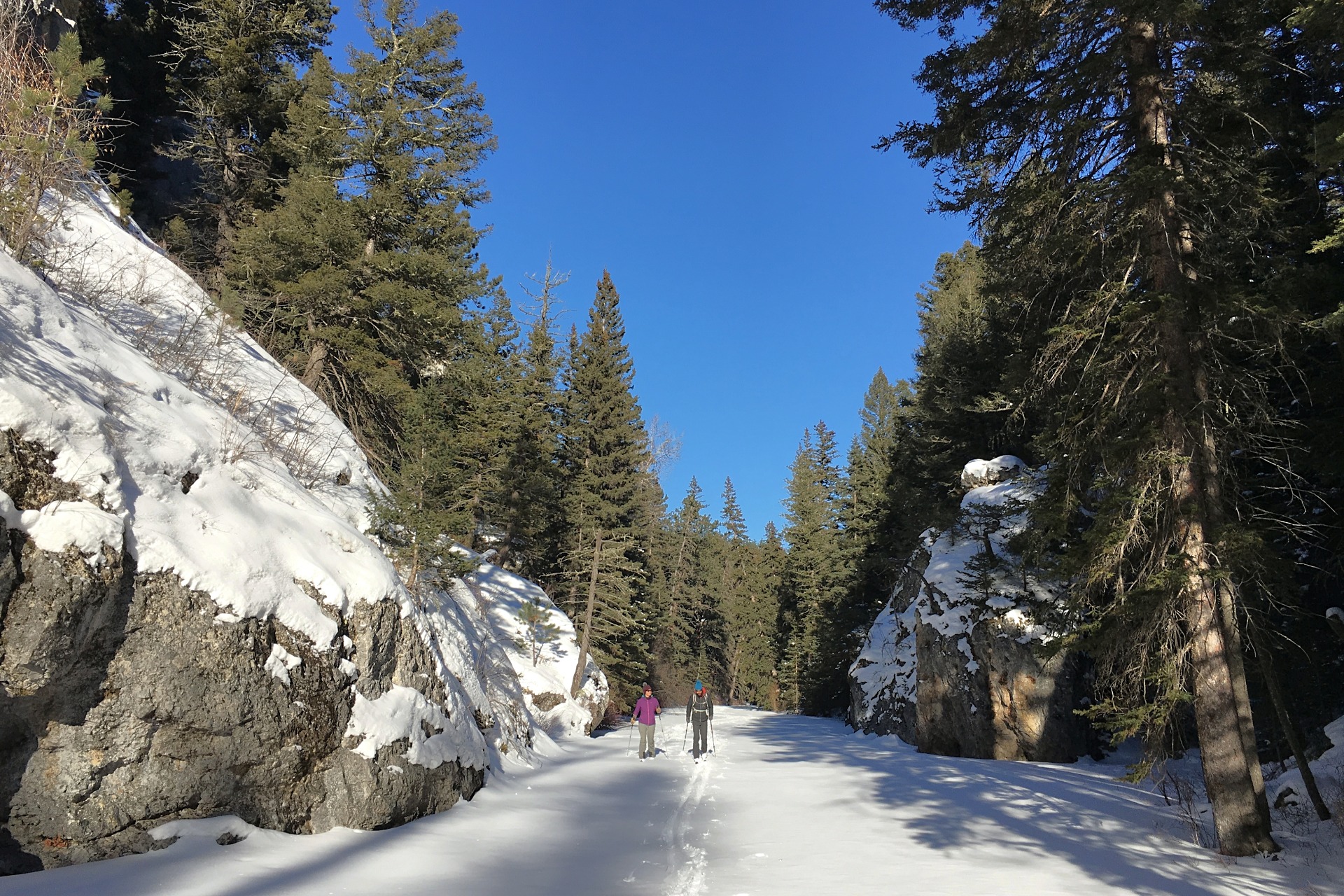 With the cars safely where we should have left them in the first place, it was time for a ski. We cross-country skied up the Middle Fork Judith River. Skiing on a river is so fun – I had never done it before. We checked to make sure the ice was thick enough and then slid up the limestone canyon. Along the way we found icy caves and sunlight hitting the rock in a spectacular way. Rocky spires reached to the sky backed by dense lodgepole and Douglas fir forests. It was easy and beautiful. We couldn’t get over what a magical place this is. 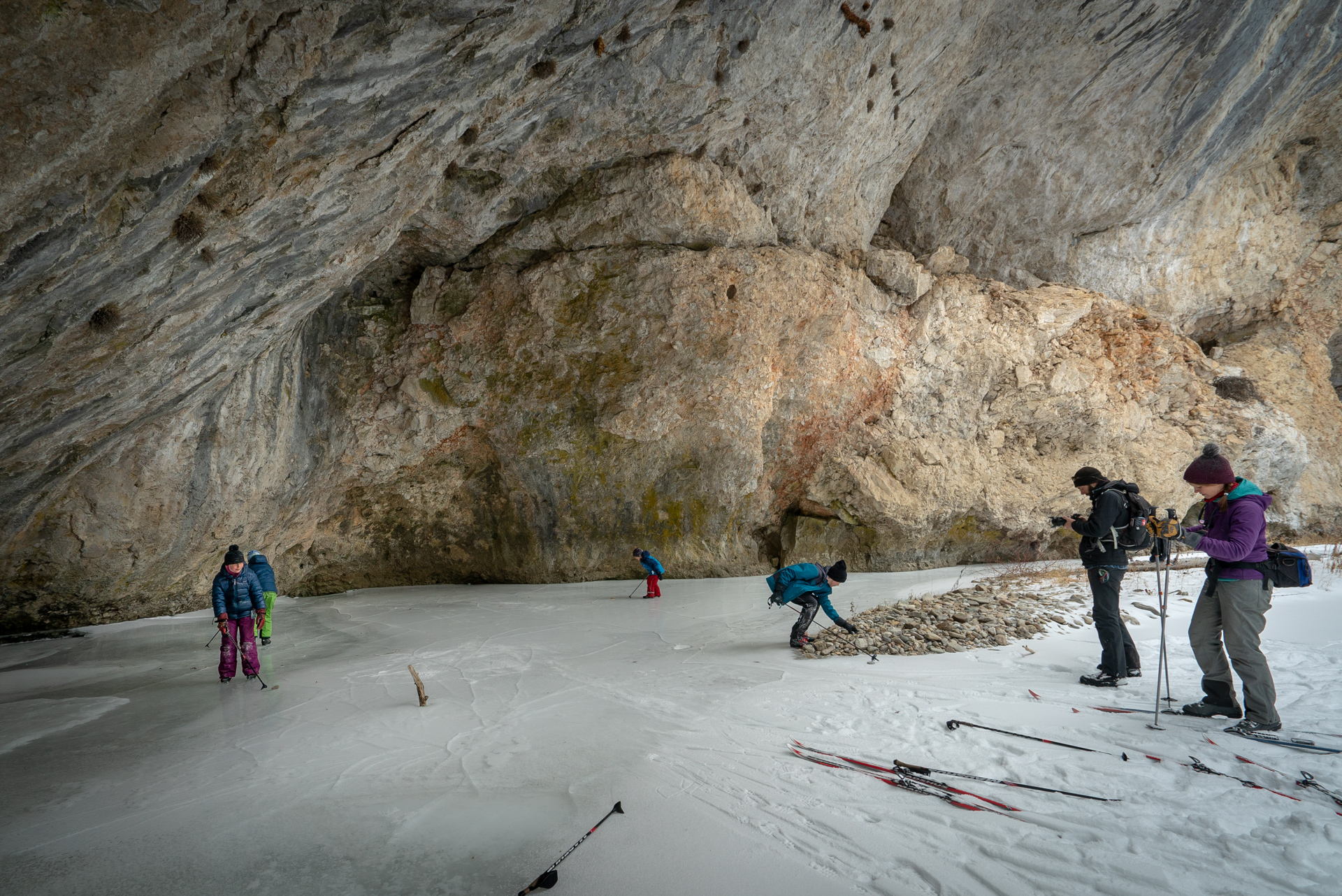 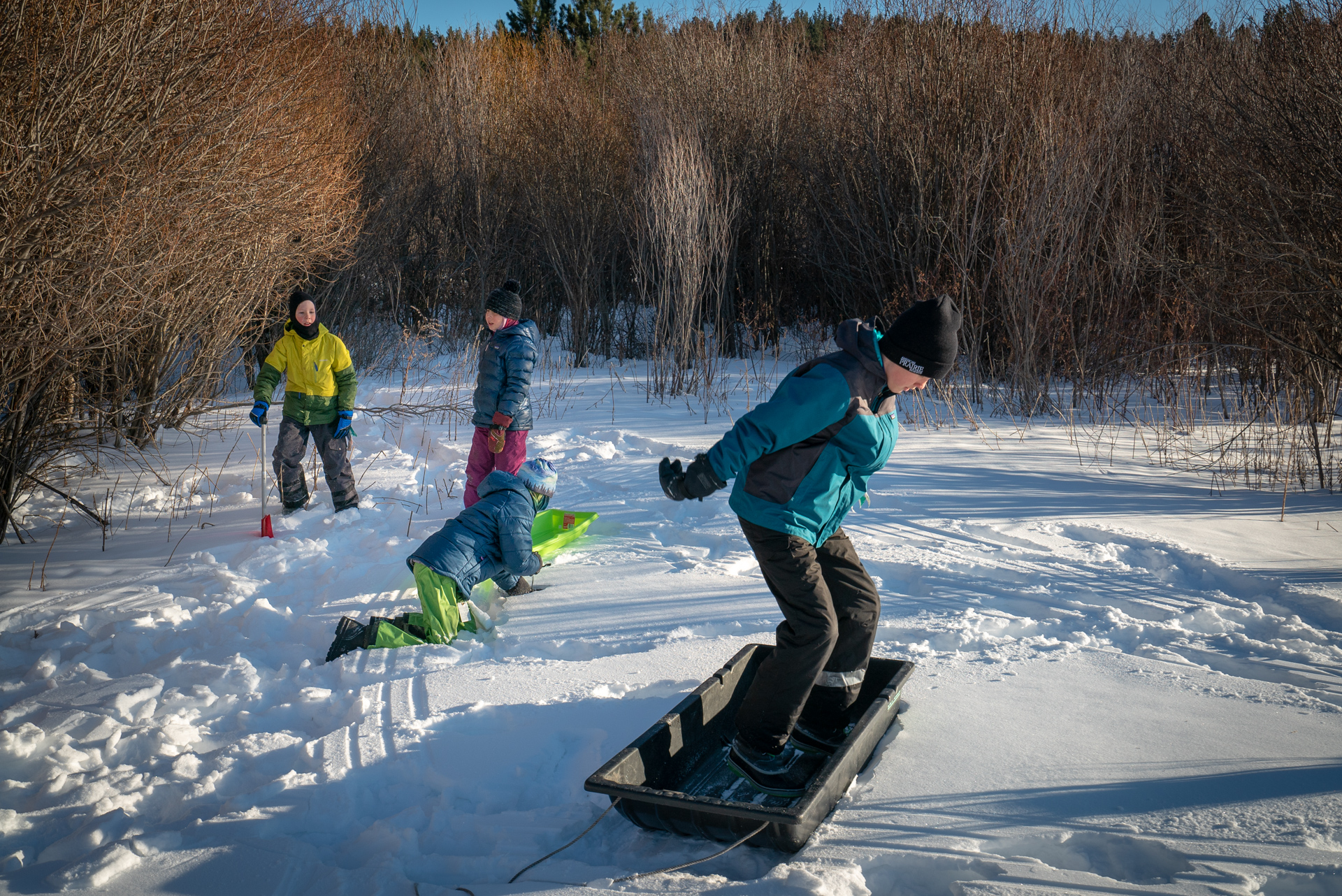 The kids made a fort in the willows across from the cabin and played in the snow, in the mornings and evenings we gathered around the stove and played games at the table. There is a piano in the living room, which could be fun or could drive you crazy. It did both for me.

We only spent two nights, but had such a good time hanging out with friends and playing outside. Even the road shoveling was kind of fun.

When we returned to cell service and civilization I emailed Senator Daines (and Senator Tester, and Representative Gianforte) outlining how special this place is and how it deserves real Wilderness protection.

Maybe you could put some pressure on them, too. We will keep exploring Montana’s Wilderness Study Areas. Not only do we have a great time outside with family and friends, we all need to show our elected officials that these places are loved and cherished.

Staying at the Judith Guard Station is one of many fun things to do in Montana.

An Off the Beaten Path Montana Bar 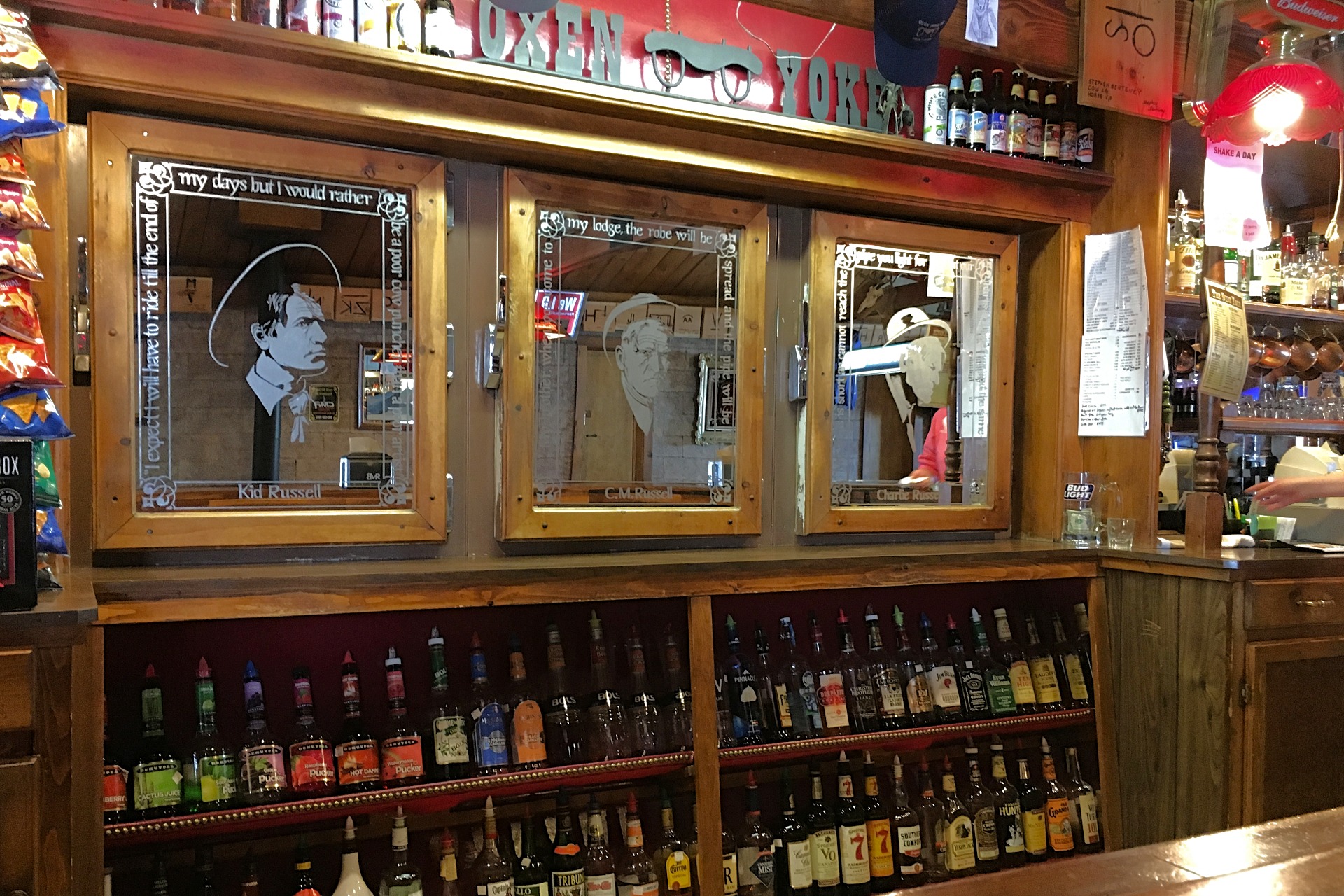 On our way out, we stopped at the Oxen Yoke Inn in Utica. They are known for their “Garbage Burger,” which I think Mark may have ordered (it was his birthday!). We all got a bunch of fried food and enjoyed the Montana bar ambiance. The mirrors are etched with pictures of Charlie Russell (America’s Cowboy Artist who painted these landscapes) at different stages of his life and short quotes. Brands, cowboy hats, and animal mounts decorate the walls. It’s a place you need to check out when you are visiting Central Montana.

About the Judith Guard Station 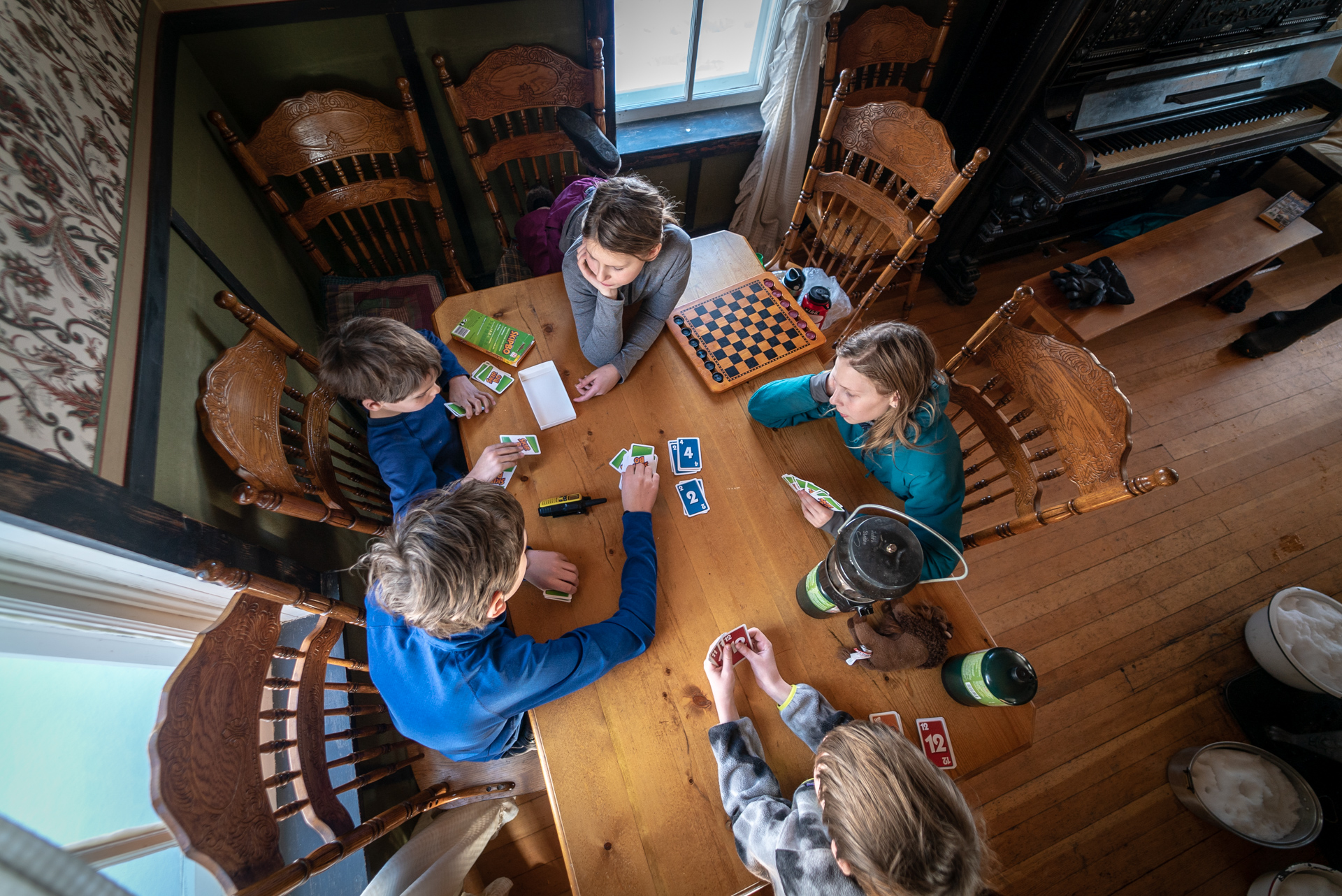 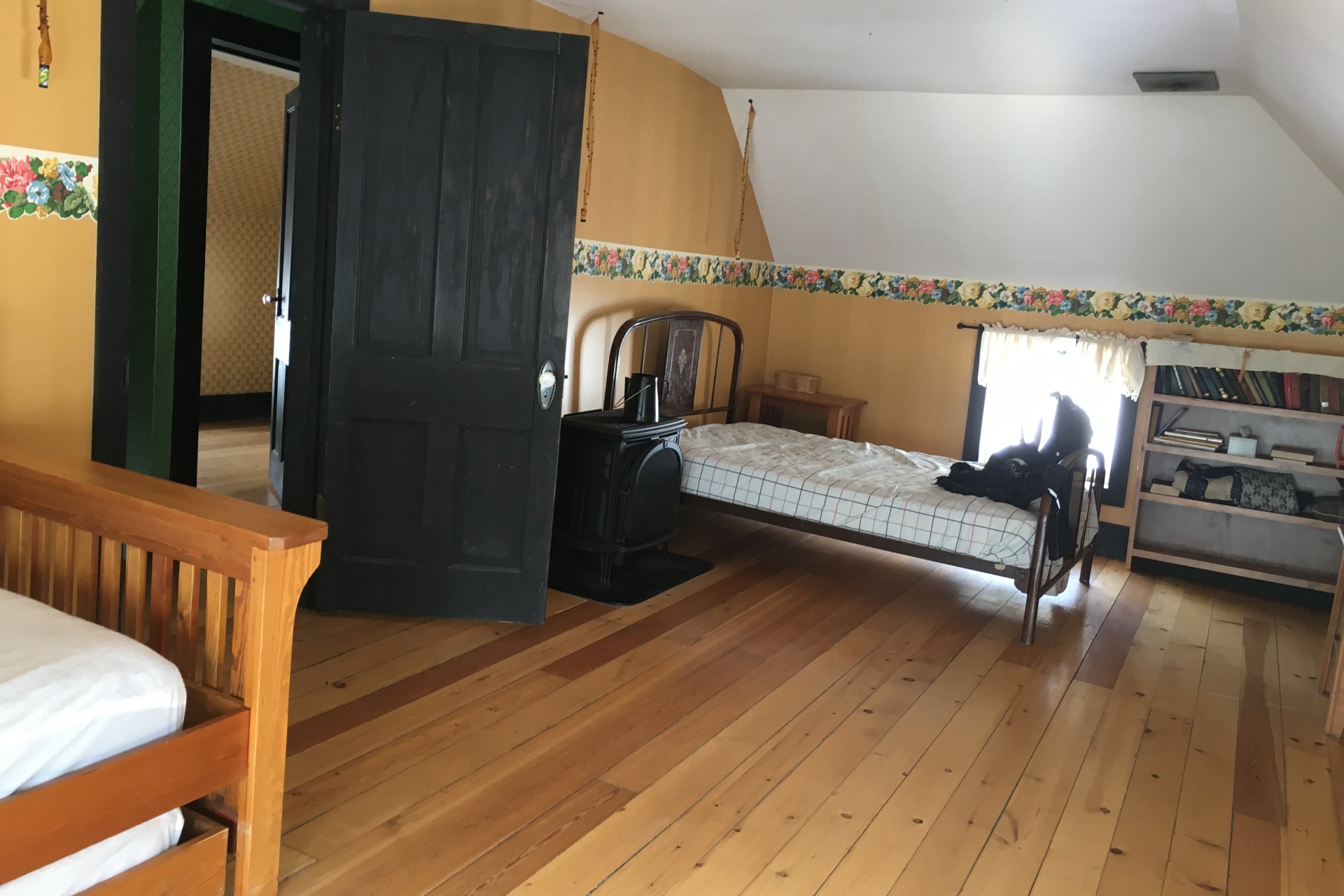 Getting to the Judith Guard Station Forest Service Cabin 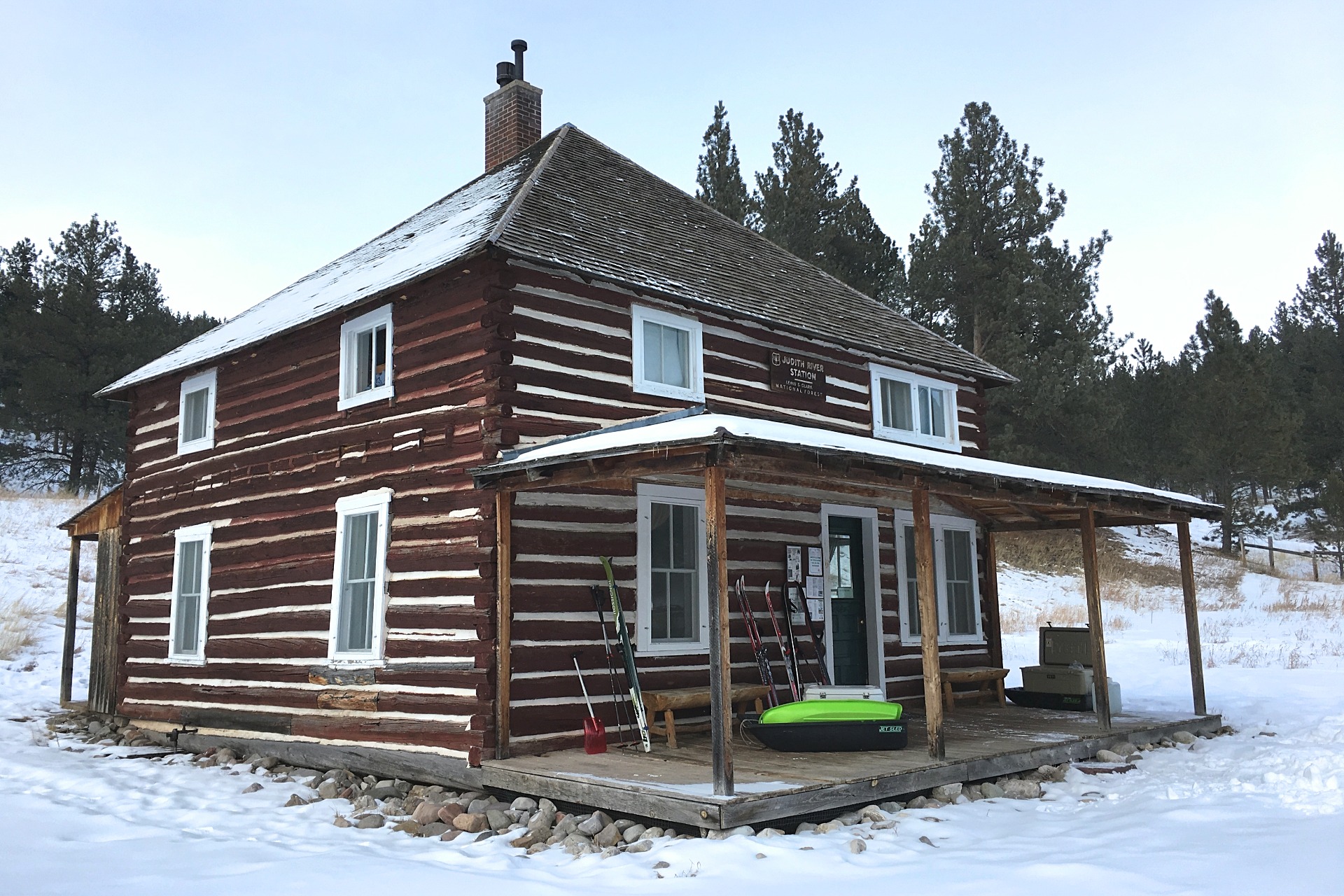 From Great Falls, travel east on US Highway 87 about 63 miles to Windham, MT. From Windham, turn off Montana Highway 200/US 87 heading south for about ten miles to Utica, MT. 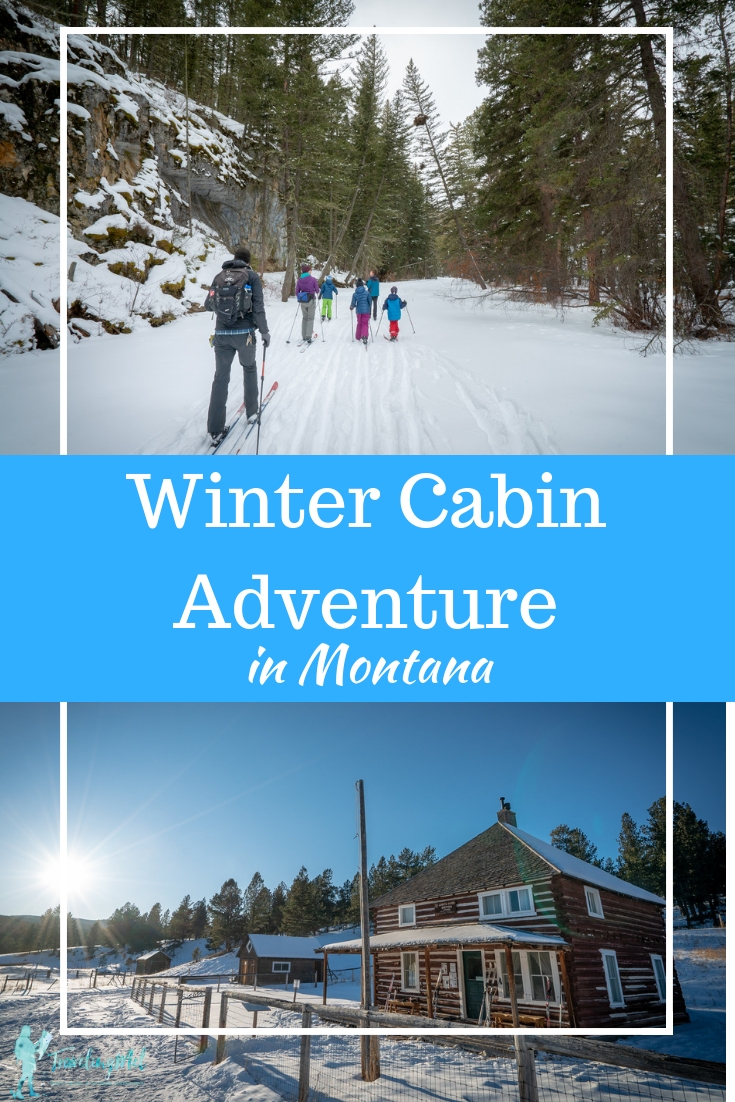