As I am driving to the Bozeman airport at 4:30 in the morning, squinting in the dark for a driveway to a house where I’m dropping one of my dogs off, I’m starting to wonder if I’m little crazy. Do people travel to the other end of the globe pregnant and toting a one-year-old? Is this a smart idea?

But it is too late. Tickets are purchased, cabañas are booked and my huge duffel bag is weighting down the back of the truck with Anders’ travel cot, board books, diapers and wipes, tot-friendly food and a change or two of clothing for me. 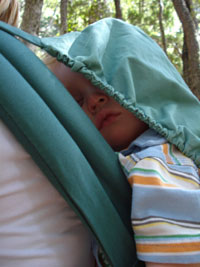 Before baby, I strolled along the Great Wall of China, rafted class IV and V rapids on the Rio Chiriqui Viejo in Panama, donned a headscarf in Turkish mosques, climbed the highest peaks in California, walked off an airplane in another country with no plans and no reservations—but this trip would be different. And why not? My life was different.

This South American adventure would be a scaled down version of my life. I had given up so many of the activities that make me who I am in order to appease a new little person. No more living just for Melynda; now Anders’ needs had to come first. At 34 years old, it was a rough transition, and though I’ll have to give up my nomination for “Mom of the Year” for saying so, I occasionally resented my son for everything he had stripped from me.

Argentina is a long way from Bozeman. It’s even longer when flying from 45 degrees north to 42 degrees south while sharing a seat with an active little boy, but Anders and I made it to Bariloche without any sleep (for me), but without angering any other passengers or getting dirty looks. We rented a car, we found our cabaña, we ate meals and took naps on a regular schedule. 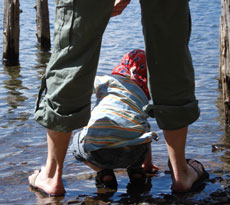 I wanted to do big hikes in the Andes, to salsa dance until four a.m. in Buenos Aires. Driving ten hours to the coast to see penguins seemed like a great idea until I considered my travel partner. Instead we hung out by lakes picking up rocks one at a time to throw in the water. I took short hikes through forests of Alerces, practically running with Anders in the backpack, knowing that I had two hours before his tolerance gave out and the complaining started.

In retrospect our Argentine travels take on a rosier glow than when we were there. A lot of trips are like that; they get better in our minds as the frustrations and discomforts of real life travel fade away and the photos of smiling faces on the trail take a more prominent position in our memories.

I discovered that traveling with someone on the edge of toddlerhood opens new doors that aren’t there for a solo traveler or a couple. Everywhere Anders and I went, Argentines wanted to talk to him, hold him, kiss him. Those people are baby crazy in way Americans certainly are not. My rubio-headed boy with the mejillas grandes was the center of attention wherever we went and I found myself talking to people all day—people who would have passed me by otherwise. When he made a sound that was mistaken for “hola” the spectators went nuts.

Anders also helped me slow down and look at the Patagonian landscape more closely. We’d spend an hour sitting by a stream playing with rocks, feeling the orange-yellow lichen, sniffing wildflowers and collecting dandelion tufts. At the botanical gardens in Buenos Aires we walked around at the pace of someone who is two feet, seven inches tall, stopping every thirty seconds to observe something tiny, or shiny, or otherwise fascinating.

I got to see Argentina through someone else’s eyes. The perspective wasn’t as big, as crazy or as fast paced as it would have been if I was alone, but the details were amazing. Now I just have to incorporate that insight into our life back home.

Many thanks to Heidi Ahrens of OutdoorBabyNetwork.com for submitting Melynda’s essay to us.