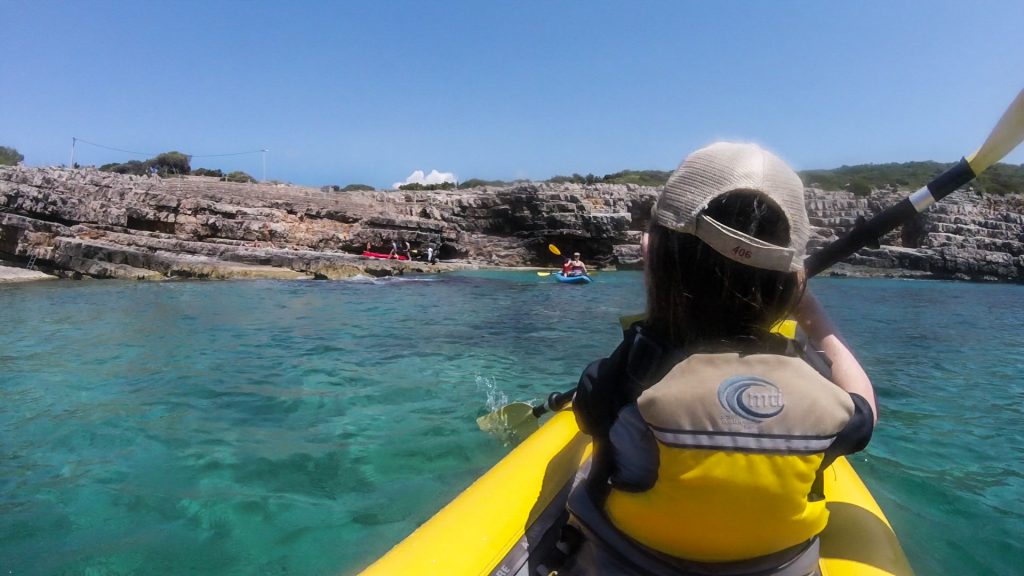 Where is Montenegro and How Did We End Up Here?

Good question. Montenegro is part of the former Yugoslavia. It borders Croatia (a tiny bit) on the northwest, Albania on the southeast, Serbia on the northeast, and Bosnia and Herzegovina and Serbia to the north and northeast. It’s in the Balkans and the western border is the Adriatic Sea. Across the Adriatic is Italy. Still not clear? Take a look at the map.

After the break up of Yugoslavia, it became part of Serbia and Montenegro and then became it’s own country in 2006. So, it’s pretty new. Until now, the youngest country we had been to was Slovenia (also a former Yugoslav state), which gained independence in 1991.

Montenegro is a republic, has a prime minister (the man shoved by Donald Trump at a NATO meeting), is part of NATO, and uses the Euro. They speak Montenegrin, which is almost the same as Serbian/Bosnian/Croatian/Slovenian. 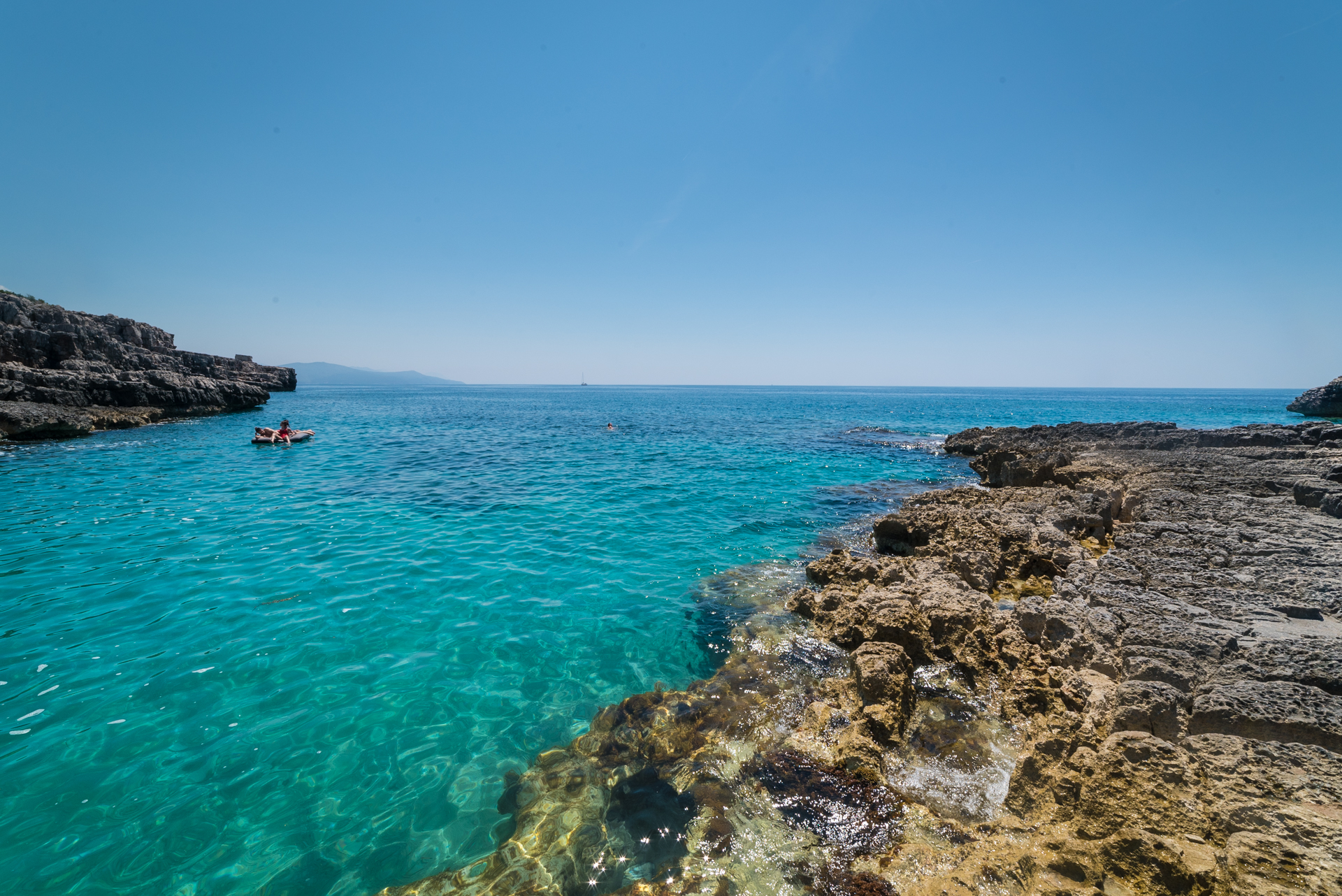 Where is Kotor, Montenegro? The Bay of Kotor is in the northwestern part of the country and it’s a huge, deep bay. Mountains rise up around it, framing the Venetian fortified city of Kotor. When we decided to explore Montenegro, we thought this would be the perfect place to start.

There are a lot of beautiful places to stay on Montenegro’s coast. We are staying near Kotor, but in a residential neighborhood where our patio backs up to Kotor Bay. In the morning, I sit on a deck chair watching the still water reflect the mountains and in the evening the sun sets and the sky turns orange and pink. In between those two times, we leap off our patio and into the Adriatic Sea for at least one swim a day. Of course, we sit behind our computers a lot, too, but I can still see the ocean above my screen.

Why Montenegro? We were looking for a place to meet some friends from Livingston (they get here in less than three weeks!!) and they wanted a sunny, beach-type location. We needed to get out of the Schengen Area. And we were deciding all this back in December when we were in Croatia, just a hop, skip, and a jump from where we are now. Somehow I thought about Montenegro, started doing a little research, and decided that Montenegro travel was the way to go. 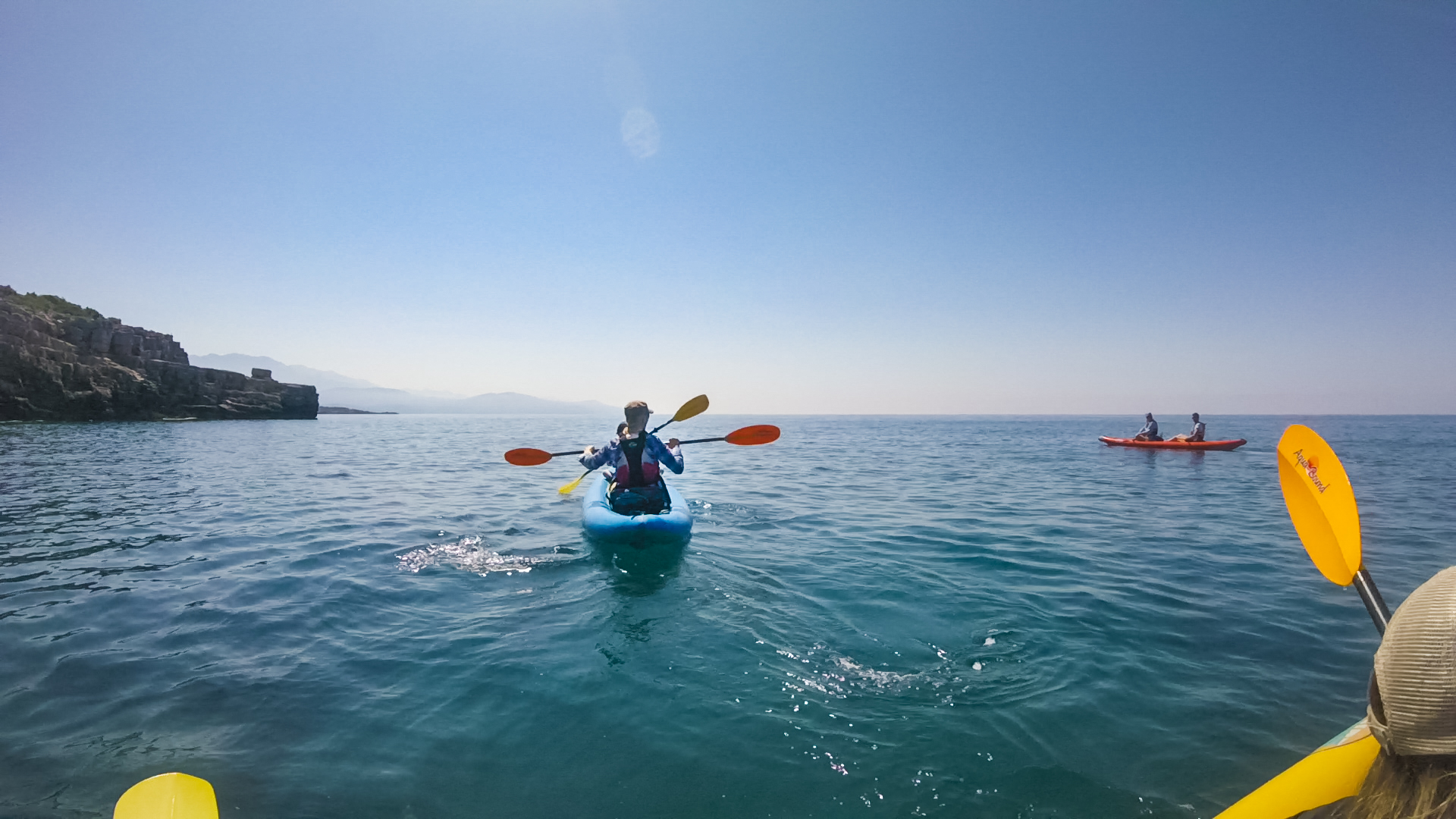 Things To Do in Montenegro

There are a lot of things to do in Montenegro, most of them focused around its natural beauty. There is rafting in the Tara River, hiking in Durmitor National Park, strolling through UNESCO designated towns, and my favorite (so far) kayak trips. Since it’s a small country, these are all things to do in Kotor, or from Kotor.

I think people who take kayak vacations come here just to go kayaking, but there is so much more.

There will be more to come on Montenegro things to do, as we do them, but for now know that most of them are outside—just how I like it! 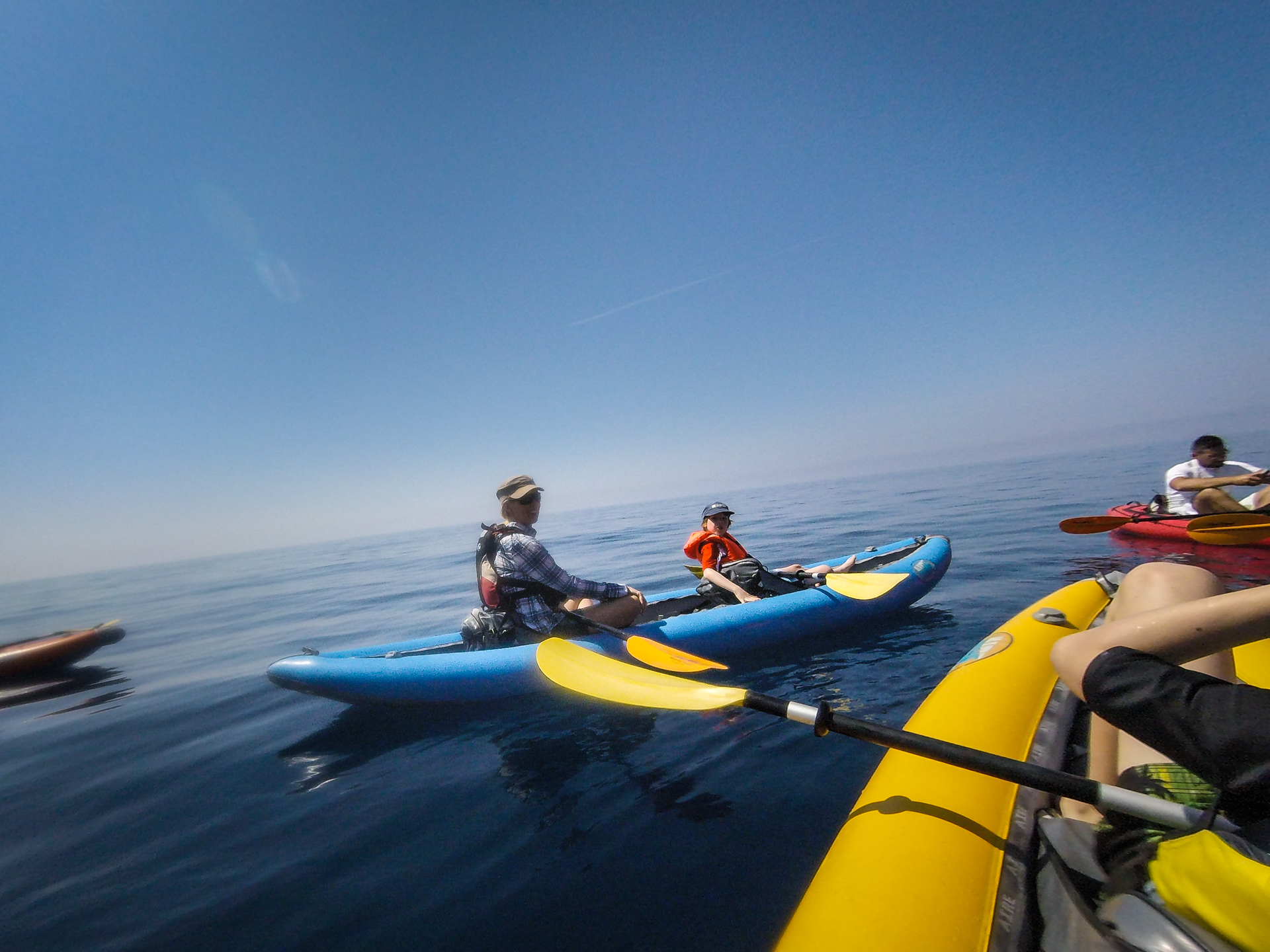 Since we are staying right on the Bay of Kotor, I wanted to go kayaking or paddleboarding or both! We were invited on one of the Montenegro+ kayak tours and jumped at the chance to visit the famous Blue Cave. Little did we know, our kayak excursions would involve several caves, stunning views of the Montenegro coast – the Karst limestone!—and a little snorkeling adventure.

Our guides Igor and Charles picked us up right in front of our apartment for our Blue Cave Tour and drove us, along with a couple from Wales, to a gorgeous beach on the open sea just outside the Bay of Kotor Montenegro.

We started at Uvala Veslo, the awesome swimming beach that the kids really want to go back to. The bottom of the little bay is smooth and visible, meeting Finn’s criteria of only swimming where you can see the bottom and there is “no growth.” 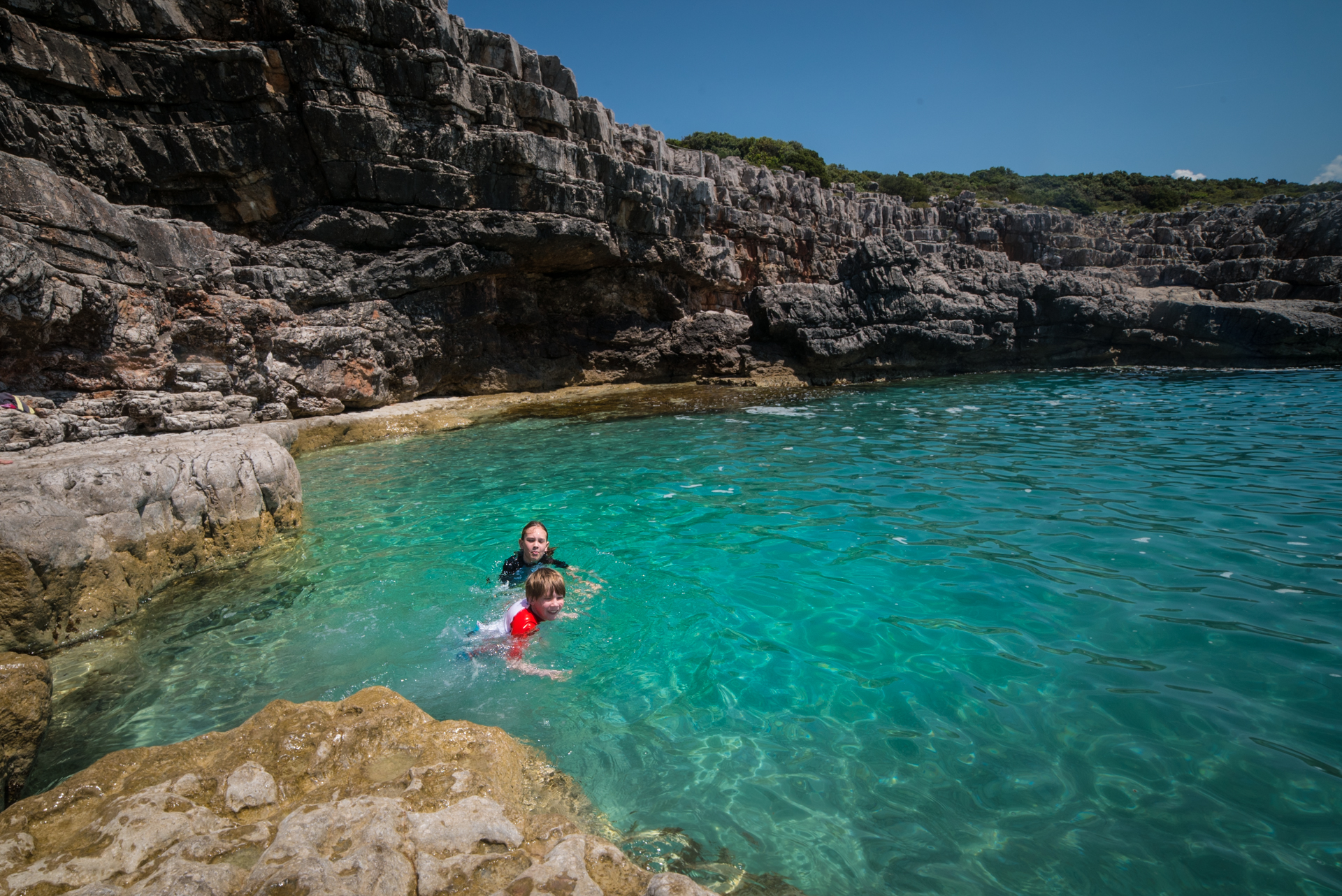 Henry and I each shared a double kayak with one kid and pushed off into the small turquoise bay. The color of the water here is amazing—it looks so tropical. From there we paddled along the edge of the Lustica Peninsula.

It was easy paddling along the shore—kayak travel is the way to go. Even though my paddling partner did more sightseeing than paddling, I could almost keep up with the group. Charles and Igor would stop from time to time and tell us a little about the history of Montenegro and specifically the area around the Bay of Kotor. You know I like a little education with my physical activity.

The cool thing about kayaking near Kotor with Montenegro+, is that we went into several caves. There are many speedboat tours to the Blue Cave, but they can’t get into the smaller caves so we had them to ourselves.

The first cave we entered, we paddled through and came out the other side. We explored another little cave, also amazingly beautiful, before entering the Blue Cave. 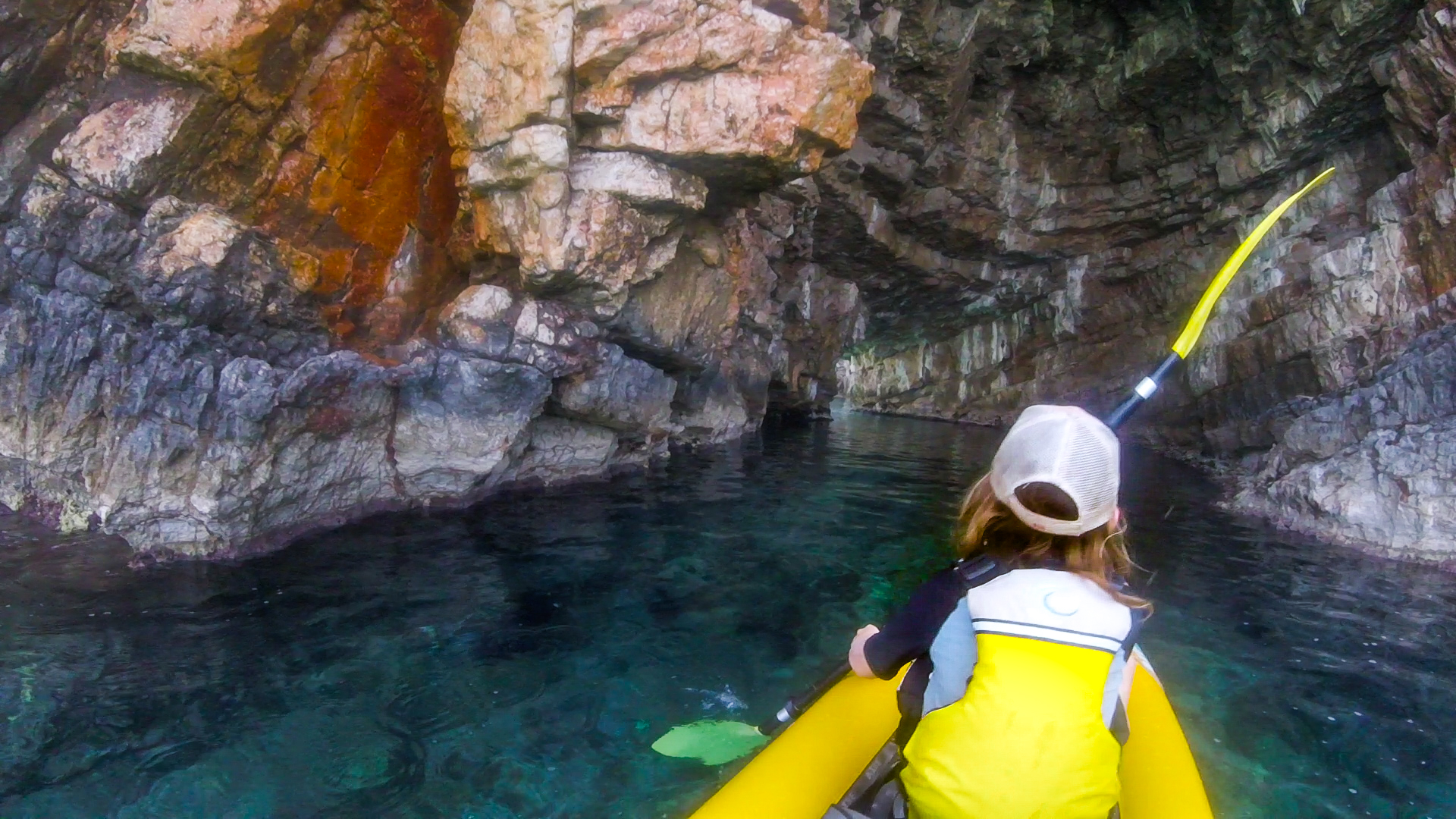 The Montenegro Blue Cave (there are Blue Caves in other places) is so called because the way the light reflects through the water. When you put your hand in, it gets and eerie blue glow around it.

We stayed in the Blue Cave for a while and swam around. Had we brought snorkeling gear, this would be the place to use it. Boats came in and out, but we took our time swimming and appreciating how lovely it was. 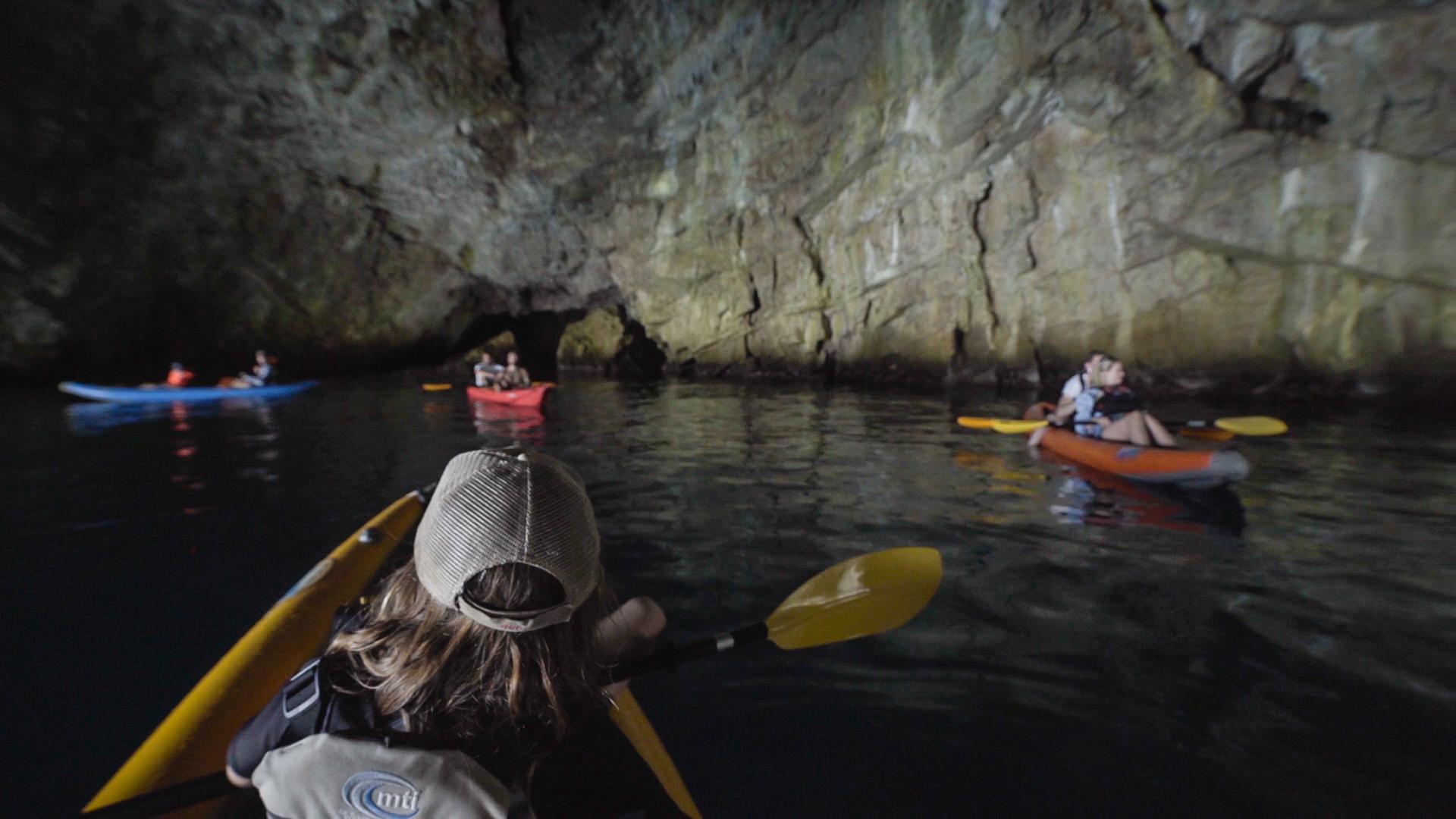 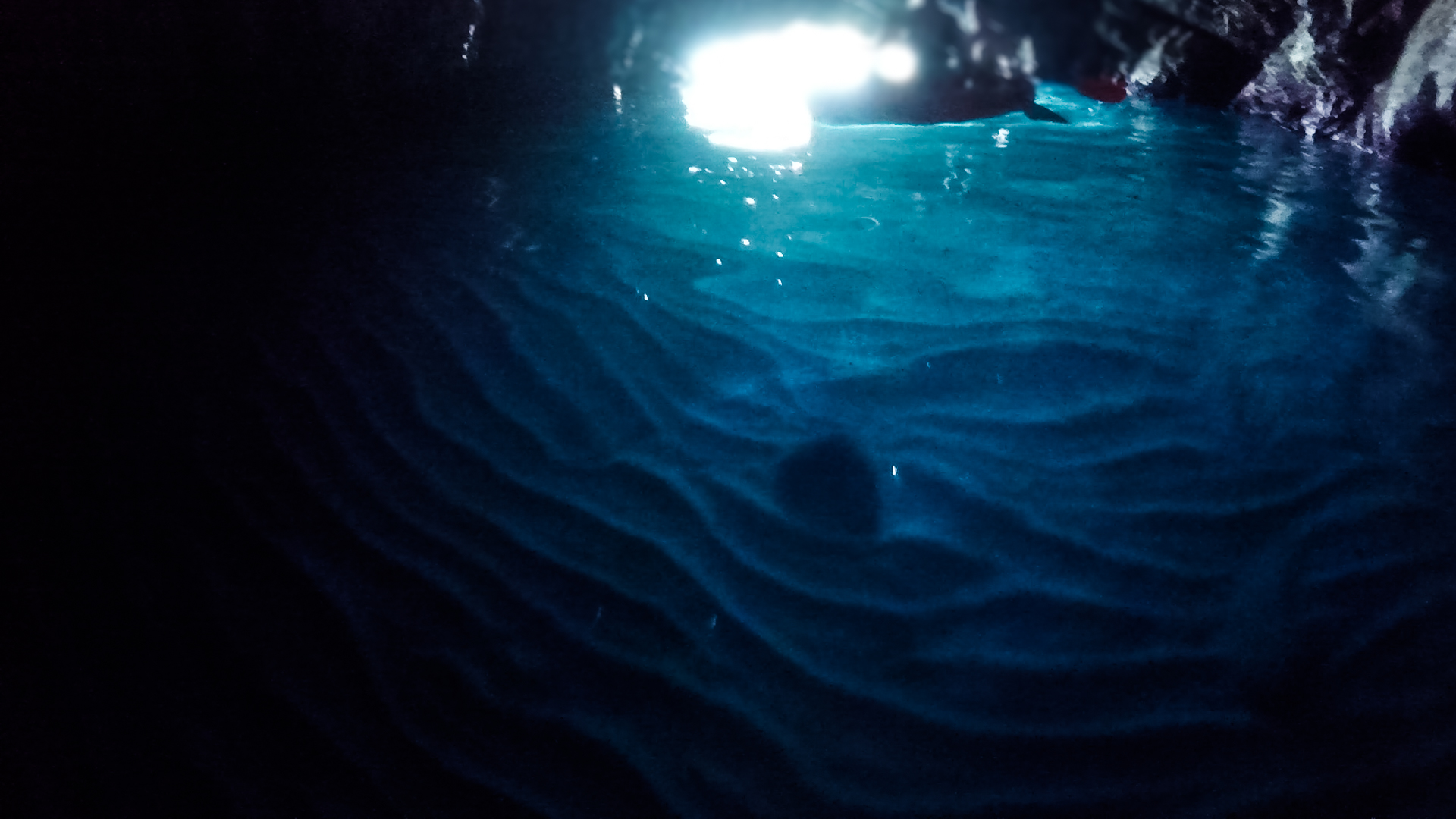 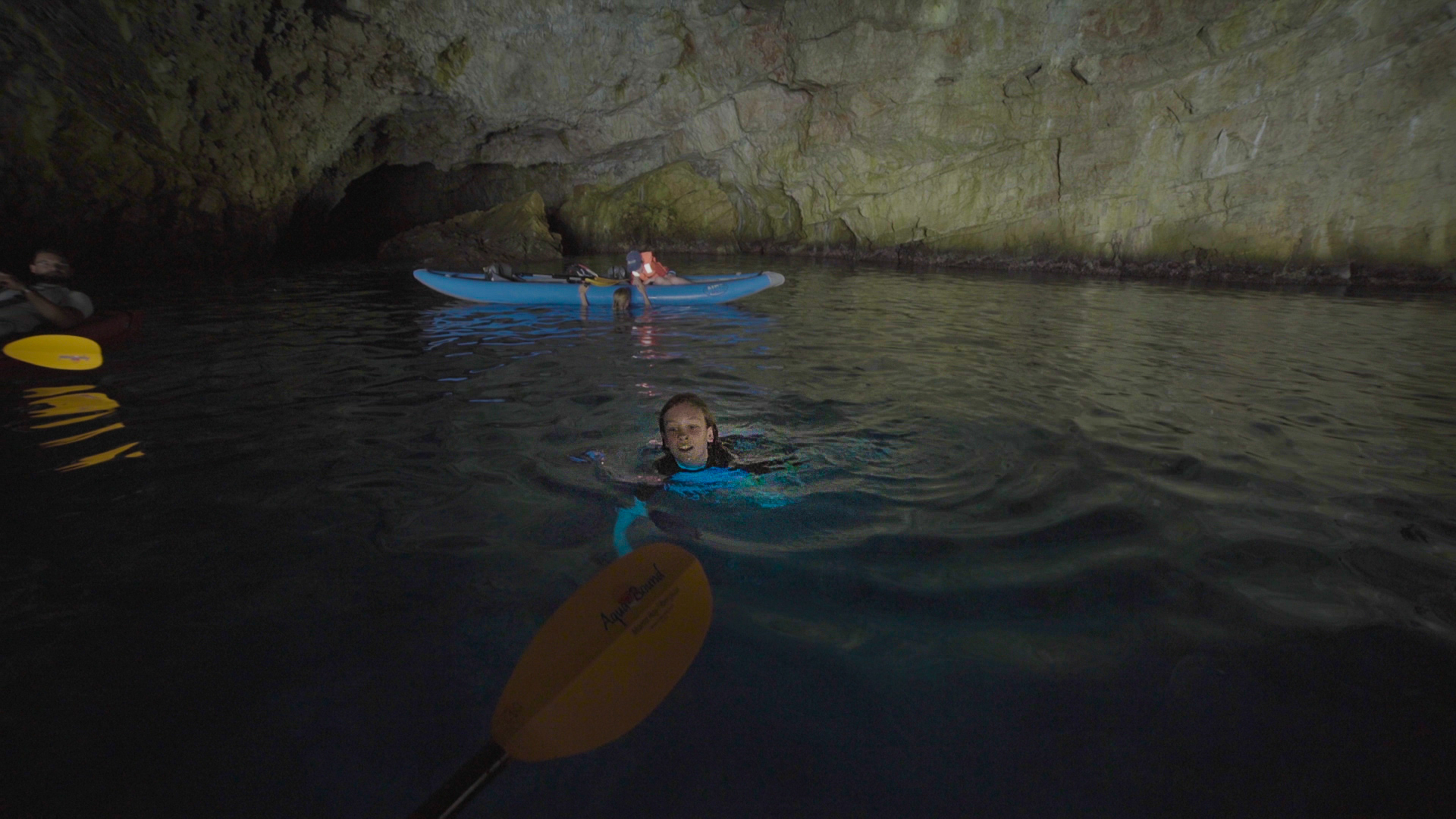 After leaving the Blue Cave we snuck into another cave. We had to lean back in our kayaks and limbo through the small entrance, but once we were in, this cave was huge. It was so dark and bats were chirping above our heads. It was so cool sitting in the dark, listening to the bat songs. Eventually, our eyes got more used to the darkness and we could see how big the cave really was. Plus the colorful walls came to life.

We squeezed out of the “Bat Cave” and paddled back to the take-out. It was just two hours or so, but it was a lovely two hours. Now all I want to do is kayak Montenegro. If you are planning a Montenegro vacation, I highly recommend this.

Other Day Tours in Montenegro

Montenegro+ does a lot of other Montenegro adventures besides the sea kayak tour. There is paddleboarding on Kotor Bay to a wildlife refuge or even to the Blue Cave if the conditions allow. In fact, they kayak and SUP all over Montenegro, including Skadar Lake in Skadar Lake National Park.

If you are into biking there is the all downhill ride of Vrmac Mountain — a half-day mountain bike tour which takes in panoramic views of Kotor, Tivat, and in the distance Croatia and Serbia. They’ll take you Montenegro hiking (downhill on a stone path), wakeboarding, scuba diving… like I said, there are so many things to do in Montenegro if you like playing outdoors. Check out their Tours page.

There are actually a lot of things to do in Kotor, including hiking the castle of San Giovanni  and exploring the old city (don’t miss the weird little Cats Museum!).

And they even have a coworking space just a 40-minute walk from us. As our Internet is not good here, we are taking advantage of that.

Should You Kayak in Kotor?

Uh, yeah! Kotor can be visited as a day trip from Cavtat or Dubrovnik, but you are probably going to want to spend at least a few days here. Plus, you’ll want to visit Cavtat, Croatia on its own. 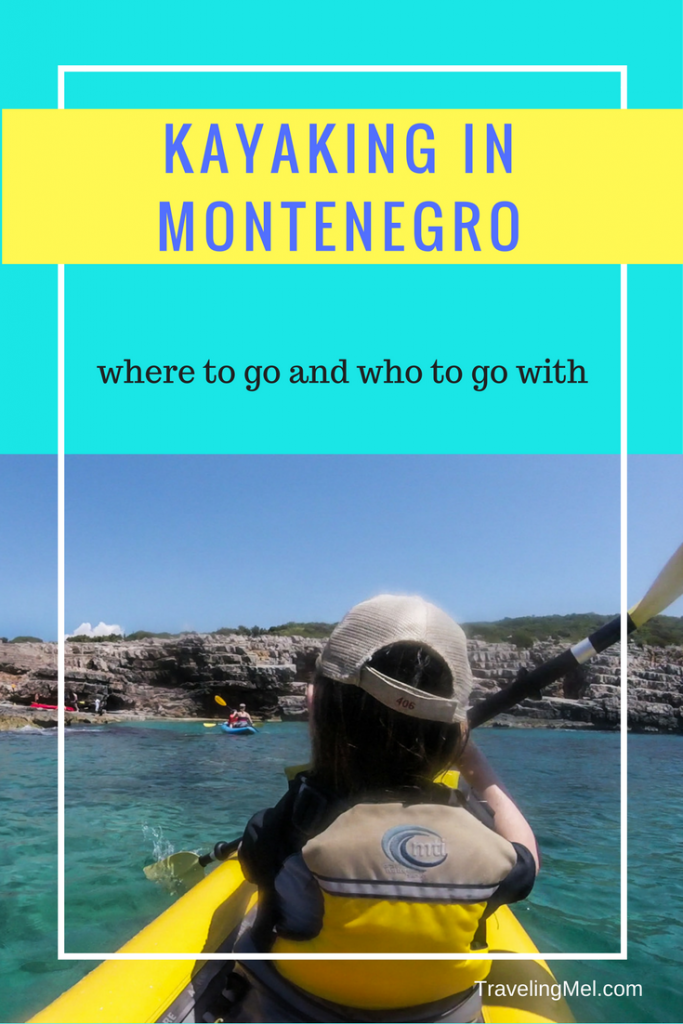 Want to see more kayaking? It’s one of the top ten things we did on San Juan Island in Washington.

36 thoughts on “We Went Kayaking in Kotor Montenegro”