Nancy Vogel unfolded her map. Smoothing out the creases, wrestling with the folds, putting Mexico behind her, and seeing the small Honduran town of Choluteca on the map for the first time. After almost a year, Nancy, along with husband John and twin 10-year-olds Davy and Daryl, were just a few hundred miles-one length of folded map-from a place she considered home. Holy cow, she recalls, it was on the map.

They werent anywhere near the United States or their house in Boise, Idaho. But, about one-third of the way into the 18,000-mile journey that would take Nancy and her family the entire length of the Pan-American Highway, this sun-tanned 48-year-old mother of two was excited to arrive at a familiar place. It was one of only a handful of familiar places shed see during the next two years, and one that-two decades after a Peace Corps stint in Honduras-still felt like home.

I left a part of my heart there, she recalls, and Id finally come back to find it again. During the next two weeks, she did just that, relaxing with her children among members of her one-time host family, visiting the school where she launched her teaching career nearly 24 years ago, splashing in Pacific waves, and settling into a routine of family-and-friend-filled events that reminded her of the community she’d left behind.

Nancy had developed a sense of isolation during the long ride south from the Arctic Circle that left her longing for a community of friends and family. That familiar stop in Choluteca was one of her favorites in a journey filled with new and foreign destinations and, when the time came to refold the map-yet again-and continue south, it was almost as hard as it had been to leave home.

After all, she says, family is the reason she and her husband John started batting around the idea of a bike trip through the Americas in the first place. They’d already experienced the powerful bonds created by long-distance cycling. Nancy and John had gotten engaged while cycling through Asia for a year. And the family completed a 9,300-mile bicycle tour of the United States before deciding to take on the Pan-American Highway.

“I was scared spitless, though,” says Nancy. The entire family was excited about the long-distance ride. But 10-year-olds Davy and Daryl insisted that the family ride the northernmost stretch of the Pan-American Highway-a lonely 400-mile cut between the Arctic Ocean and Fairbanks, Alaska, called the Dalton Highway-for their chance to set a Guinness World Record as the youngest people to cycle from the Arctic to Patagonia. No rescue crews, no place to re-supply in emergencies, and famously difficult terrain had Nancy wondering: Am I crazy to put my kids in this kind of danger?

The thing she did know was that, no matter what happened in Alaska, or anywhere else for that matter, this trip would strengthen all the members of the family, and the family as a whole, by extension. By the time they pulled their dirty bikes into Fairbanks, in late June of 2009, they’d covered one of the journey’s most difficult stretches. Finishing that first leg of their trip bolstered their confidence and gave them a chance to adjust to life in the saddle. Within a few weeks, the Vogel crew was already transforming from parents and children, teachers and students, into a team. “We respect each other’s strengths and know how to utilize them,” says Nancy, “but we also recognize each other’s weaknesses and know how to cover for them.” 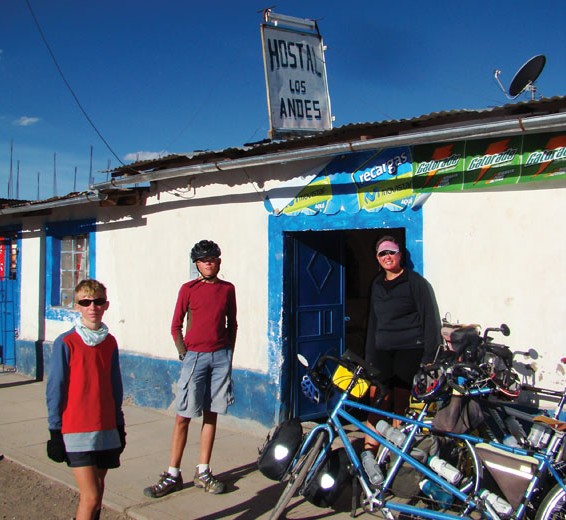 Checking into the Andes Hostel after a solid week of camping.

It’s true, says Nancy, that a lot of people talk the talk when it comes to extended journeys as a family. But she’s disappointed how few actually walk the walk, “I really wish more people would do it,” she says. “I wish more people would head out to see the world with children in tow. There’s just so much to learn out there.”

As school teachers, Nancy and John have the tools to capitalize on the learning opportunities they encounter on their journey: history lessons at Mayan ruins, Spanish immersion, and geography lessons along mountain ranges and fault lines. Nancy recounts her own surprise when, during a side-trip to the Galapagos Islands, the boys explained to her Darwin’s theory of natural selection. “I sat there in disbelief,” she says. “Our tour guide had explained it during the day, but I didn’t realize they were listening. It’s just one example of how they learn by osmosis; they go to a place and the collective wisdom behind it goes into their brains.”

Much to her surprise, Nancy’s perspective about the family’s trip isn’t universal. A small but vocal group of critics has attacked the family’s motives and chastised Nancy and John for dragging their children away from “normal” life. “I was devastated,” Nancy says, remembering the first time she heard the opposition. But the criticism forced them, as a family, to reevaluate their motives and ask questions: Why are we doing this trip?
Is it good for the kids?

More than two and a half years into the trip, as they near the finish line, Nancy’s reflections are cautiously affirmative. “There are good and bad things, advantages and disadvantages to any lifestyle,” she says, weighing the activity options the boys would have had in Boise against the ones they’ve had on the road. Football practice or swimming with sea lions; student government or flying over the famous Nazca Lines; Burger King or tasting authentic asada in Argentina. “One’s not necessarily better or worse; they’re just different. As parents, we make those decisions for our families,” she says, “but in our case, our kids have a huge voice.”

There were plenty of tough times during the trip-low points during their wind-blown ride across Peru’s high deserts, or a long slog through Argentina’s lake district. Those struggles gave Nancy an opportunity to see the boys’ own willingness to do the trip. “Even with an extreme internal desire to reach Ushuaia, sometimes it’s hard enough to force myself to continue riding,” she says. “I could never have forced my children to do this.”

Nor, she admits, could she have anticipated the pride she feels for their perseverance and strength, both mental and physical. Though both relatively strong and independent as 10-year-olds, Davy and Daryl have blurred the line between provider and dependent in the Vogel family. With maturity, they’ve developed strength, judgment, and experience that comforts Nancy when her own strength and determination wane-like last fall when she fell sick with pneumonia.

Nancy was feverish, barely able to stay on her bike, when Davy offered to switch his lightly-loaded single bicycle for her heavily weighed-down one. Forty miles from the next town, she decided to take him up on the offer. “I rebelled against it a little bit. I felt like I needed to be the strong one, and it was a huge thing for me to relinquish the bike,” she says, noting that as she and John, now 50 and 56 respectively, are visibly aging and losing strength, the boys are visibly gaining it. “I realized that our roles were switching, and I burst into tears. I felt so much pride,” she says. “For the boys, this lifestyle and our progress is normal. But they don’t know how incredibly remarkable it really is.” 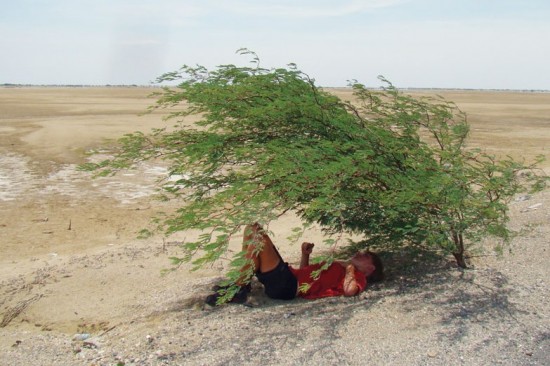 Daryl takes a break in the only patch of desert shade.

Last January, Nancy unfolded a worn map she’d been cursing for the last several hundred miles. Weary from its inaccurate distances, false leads about water sources, scattered villages, and indirect routes that pit rolling hills against out-of-the-way highways as route options, this was a stretch of riding she was glad to put behind them. Coupled with her recent bout of pneumonia and a couple of perpetually broken tire spokes she’d be nursing until replacements arrived from the U.S., the family’s recent progress was slower and more difficult than they’d imagined. But, as Nancy carefully re-creased the map, their final destination finally appeared along its worn southern edge. The distance between them and their goal-the southern terminus of the Pan-American Highway, the city of Ushuaia-was just a fraction of the distance they’d already covered.

She’d known it was coming, but the appearance of the worlds southern-most town on the last map opened her eyes again to the accomplishments of the family over the last two and a half years, the growth she’s seen in the boys and the possibilities for the future. The last of which is weighing heavily on the minds of everyone in the family. “On the one hand, I’ll be so excited and elated that we made it,” says Nancy, “and on the other hand, I could be really depressed because we’ve finally finished this thing we’ve been focused on for so many years. We’re in a position where we could, literally, do anything.”

Along with that possibility, and the pace and style that Nancy and John have established as “normal” for the boys, comes a lot of questions about what everyone wants. In the same sentence in which she mentions her age and ailing body, she mentions the possibility of touring the world, riding around Australia, or across Asia. The boys, she says, are of two minds-curious about a life as typical teenagers back in Idaho and also excited by the prospect of carrying on to see more of the world. “They’re so flexible; that’s the way kids are,” says Nancy, “As for going home, it may turn out that we get back on our bikes to feel like we’re there.”

See the original at Women’s Adventure.