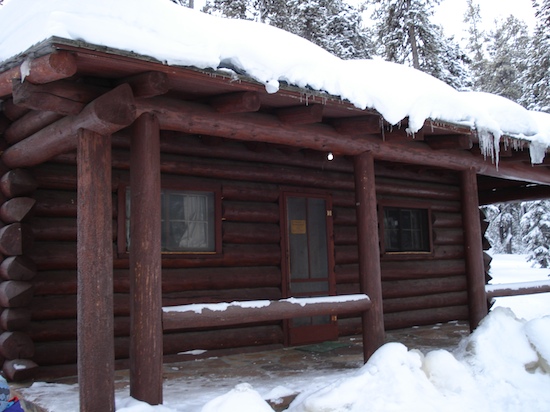 Tucked in the trees, about 100 yards from U.S. Highway 89, sits the Kings Hill cabin. Unless, youre looking for it, its easy to buzz right past. If you do, youll miss out on one of the best Forest Service cabins around.

The Kings Hill cabin is nestled into lodgepoles on the Lewis and Clark National Forest 28 miles north of White Sulfur Springs.

(Be sure to stop at the Spa Hot Springs Motel for a soak in the geothermally heated mineral water pool.)

There are two rooms, three bunk beds, a dining table and chairs, kitchenware, electric lights (and electricity!), refrigerator and an electric stove. The outhouse is five-second walk from the cabin. Bring your own bedding and food, plus your skis and sled, and youre ready for a weekend in a winter wonderland.

A wood stovefirewood providedwarms the cabin, but get there early to stoke the stove because it can take a few hours to warm up both rooms. There used to be a space heater for the bedroom, but it has disappeared; consider bringing your own.

The cabin is just 300 feet below 7,600-foot Kings Hill Pass in the Little Belt Mountains and right in the middle of winter storm paths, so the snow is great all winter long. Aim for a midweek trip if the constant hum of snowmobiles bothers you.

One youre there youll want to get out and ski. The cabin is two miles from Showdown Ski Area, half a mile from the Silver Crest Cross-Country Ski Trails and has access to cross-country skiing right out the door.

Showdown Ski Area is known for its family-friendly atmosphere. Its base elevation is higher than some summits and the location almost guarantees good snow. Showdown boasts 34 trails, 1,400 vertical feet and 640 skiable acres. In case you forget a crucial menu item, the grill serves breakfast and lunch.

Silver Crest Cross-Country Ski Trails has 13.8 km of groomed ski trails and 200 miles of groomed snowmobile trails. All the ski trails create loops that begin and end at the Kings Hill Recreation Area parking lot north of the cabin. The trail terrain is gently rolling with several moderately steep pitches and is groomed on Saturdays. There are three warming huts along the way. While dogs are allowed in the cabin, they are not permitted at Silver Crest. Trail maps are available at the parking area.

Rent the Kings Hill cabin by logging on to www.reserveusa.com or calling 1-877-444-6777. Find photos and descriptions here, though reservations must be made through Recreation.gov up to 180 days in advance. The cabin is also available on a last-minute walk-in basis up to three nights in advance at the White Sulfur Springs Ranger District office.

Snowshoes are available for loan at the Belt Creek Ranger Station located at 4234 US Highway 89 North. The station is located between the towns of Neihart and Monarch. Their hours of operation are Monday through Friday from 8 am to 4:30 pm. 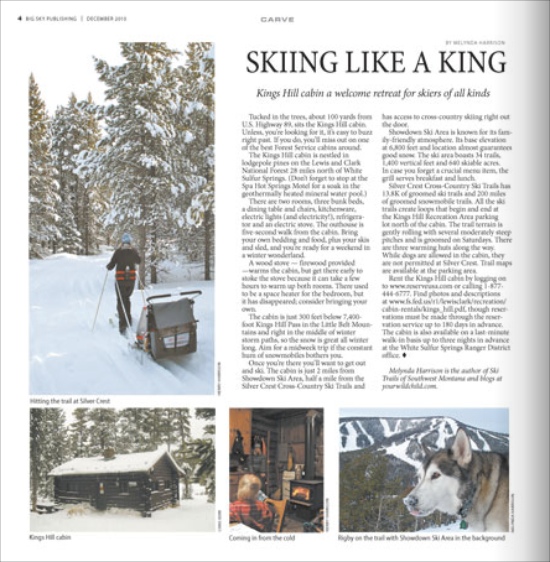 A version of this story originally appeared in Carve (p.4), December 2010