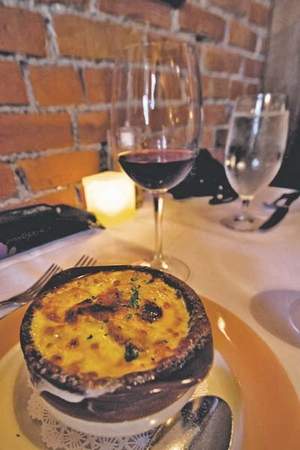 Walking into the Pearl Cafe in Missoula feels like walking into a restaurant in the French countryside. There’s soft music, soft lighting, and gentle colors. There are no televisions or phones-nothing to distract from the experience. The waiters are friendly, not formal, offering a people-pleasing style of service.

In other words, it’s inviting.

“I’m hoping for an oldschool, relaxed atmosphere,” said Pearl Cash, the restaurant’s owner. “I want this to be a place where people can reconnect with face-to-face conversations.”

It’s creating that dining atmosphere that has kept Cash in the restaurant business for 36 years. Of course the food is important, but people are Cash’s focus.

“I have customers that I’ve had since day one, and I am completely fond of them,” Cash said. “I love meeting people who come here from other parts of the U.S. and are dumbfounded that they can have this type of experience in Missoula.”

Cash enjoys being part of people’s dining lives. She relishes the engagements, anniversaries and birthdays. She gets to spy on first dates and reunions.

Cash grew up in the Bitterroot Valley on a small subsistence farm where her parents grew 90 percent of the food they ate. At age 11, Cash moved with her family to Hamilton and had her first restaurant meal. That meal, while rather ordinary as far as restaurant meals go, opened a world of possibilities.

She began experimenting with recipes from borrowed cookbooks, and by the time Cash was in high school, she had her first restaurant job at the Ground Cow in Hamilton. She got hooked on cooking and knew she wanted to open her own eatery.

It wasn’t long before she found herself touring France and discovering French cooking. She was in love. She brought that French sensibility back to the U.S. and opened several restaurants over the next couple of decades. The Pearl Cafe is the latest.

While the meals have changed over the years, the feeling behind the food hasn’t.

“I’ve seen trends and mini-trends come and go,” Cash said. “Certain foods are criminalized and then they come back into style.”

“In the ’70s, no one was interested in trout, pheasant, or herbs grown on the front lawn,” Cash remembered.

Now she serves them up, along with bison, huckleberry chutney, Montana grass-fed beef, and West Coast seafood. Summer, while all too short according to Cash, means local produce and tables laden with vases filled with flowers from Cash’s own Wild Rose Ranch.

Two of The Pearl’s signature meals are filet with green peppercorn sauce and filet with port and Roquefort.

“I can’t even imagine what would happen if I tried to take those off the menu,” Cash said.

The French onion soup gratinee, long simmered for rich flavor, topped with Gruyere cheese and broiled until golden brown, is reason enough to visit the cafe. And there’s always a fresh fish of the night.

“People have a lot of faith in the freshness and deliciousness of the nightly offering,” she said.

With the French countryside atmosphere, highly delectable food and patrons who come back over and over again, it seems that Cash has created just the experience she was hoping for.

From the The Great Falls Tribune.