As unschoolers and worldschoolers, we are always trying to add some learning to our travels. We are a curious people. Between hiking trails and breweries, we visit museums and places of cultural importance. Some of the visits we’ve made over the years have been to battlefields in Montana. 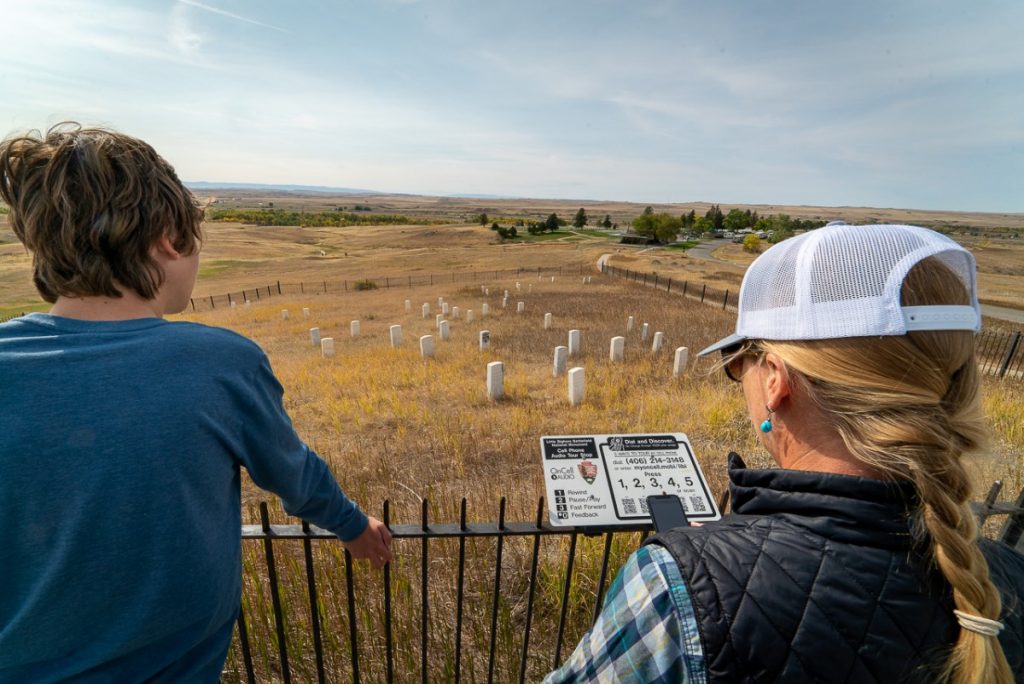 If you are traveling in Montana during Covid-19, there are a few things to remember in order to travel responsibly.

It’s pretty basic — be a good guest. We love having visitors here in Montana and we ask that you respect the people who live here, our public health, and our spectacular outdoors. You can read more about the Montana Aware program here.

Manifest Destiny, Western Ho!, furs, gold, silver, and copper, among other things, drew people to the West. Once here, they found that the people already living here didn’t like being told to get out of the way.

Clearly it’s more complicated than that, but this is a family travel blog and I’m not here to give you a history lesson. I’m here to show you how you can visit these places of historical importance- Montana’s battlefields—and learn about what transpired.

Montana’s battlefields look a little different than their eastern counterparts because there are Indian memorials and offerings alongside the traditional gravestones and U.S. memorials.

I’ll warn you- it can be heartbreaking- but it’s important. Like most history lessons.

The four battlefields mentioned below are sacred places. They are places to commemorate the many lives that were lost there — which, I suppose, all historic battlefields are meant to do. They are cemeteries, after all.

Rosebud Battlefield State Park and Little Bighorn Battlefield National Monument are on the  Warrior Trail — the length of Highway 212 from Little Bighorn to the Montana state line, through places of significance to Native American history of the Great Plains.

Both of these battlefields can be included in a road trip around Southeast Montana. You can follow The Trail to The Little Bighorn through southeast Montana and stand where the warriors and soldiers stood in the months leading up, and immediately following, the Battle at Little Bighorn.

In this post I will give you a brief synopsis of what happened at each battlefield. I’ll share how you can visit the battlefields and learn about the history yourself.

I will also suggest a book to read before your trip for a thorough overview of the battle that took place at each battlefield. At the end of the post, I list books filled with tribal voices and stories to better understand their perspective and help make sense of Montana’s history.

Don’t forget to pack a picnic and water. All four of these battlefields are in beautiful locations. You’ll want to stay and check out the scenery, watch for wildlife, and imagine the past.

What Happened at Rosebud Battlefield

The Battle of Rosebud may be the largest Indian battle fought in what became the American West.

“Brigadier General George Crook, along with his Crow and Shoshone scouts, had come north from Wyoming with approximately 1,000 troops looking for the Sioux and Northern Cheyenne villages of Chief Sitting Bull.

“On the morning of June 17, 1876, near the headwaters of Rosebud Creek, Crook was unprepared for the organized attack of an equal or even greater number of warriors lead by Sioux Chief Crazy Horse and Cheyenne Chiefs Two Moon, Young Two Moon and Spotted Wolf. The presence of thousands of warriors and soldiers on the rolling hills of Southeastern Montana made the eight-hour engagement one of the largest battles of the Indian wars.

Because Crook and his troops had to withdraw and resupply, they were not available to assist Lieutenant Colonel Custer at the Battle of Little Bighorn eight days later and 25 miles away.

The Northern Cheyenne call this battle “Where the Girl Saved Her Brother.”

Rosebud Battlefield is a day use park, with picnic tables, vault toilets, and interpretive displays. It is open daily, year round. Camping and other recreational activities can be found 13 miles south at Tongue River Reservoir State Park.

There are several trails to hike and you are free to wander throughout the park where there aren’t trails. Walk to the Kobold Buffalo Jump and up to the top of Crook’s Hill, then over to Conical Hill.

In winter, bring your snowshoes or cross-country skis to enjoy a very different experience at Rosebud Battlefield.

The 3,052-acre park is surrounded by private property, including the Crow Indian Reservation. Watch out for rattlesnakes in summer. 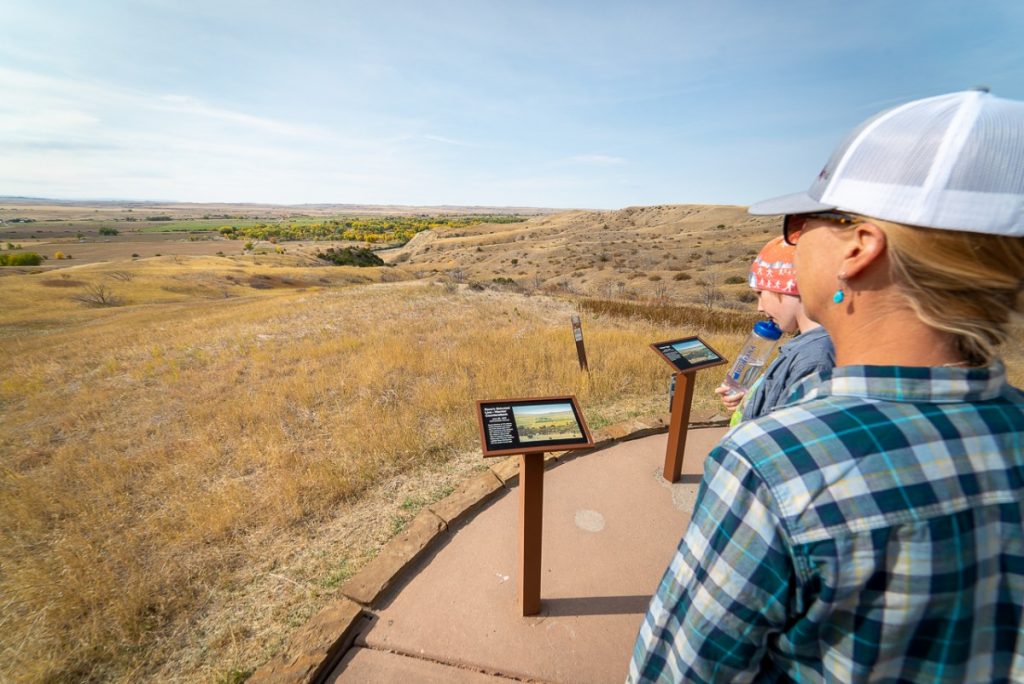 What Happened at Little Bighorn Battlefield

Little Bighorn National Battlefield “memorializes the US Army’s 7th Cavalry and the Lakotas and Cheyennes in one of the Indian’s last armed efforts to preserve their way of life. Here on June 25 and 26 of 1876, 263 soldiers, including Lt. Col. George A. Custer and attached personnel of the US Army, died fighting several thousand Lakota and Cheyenne warriors.” –  NPS

In addition to being a sacred and historic place, it’s also quite scenic. 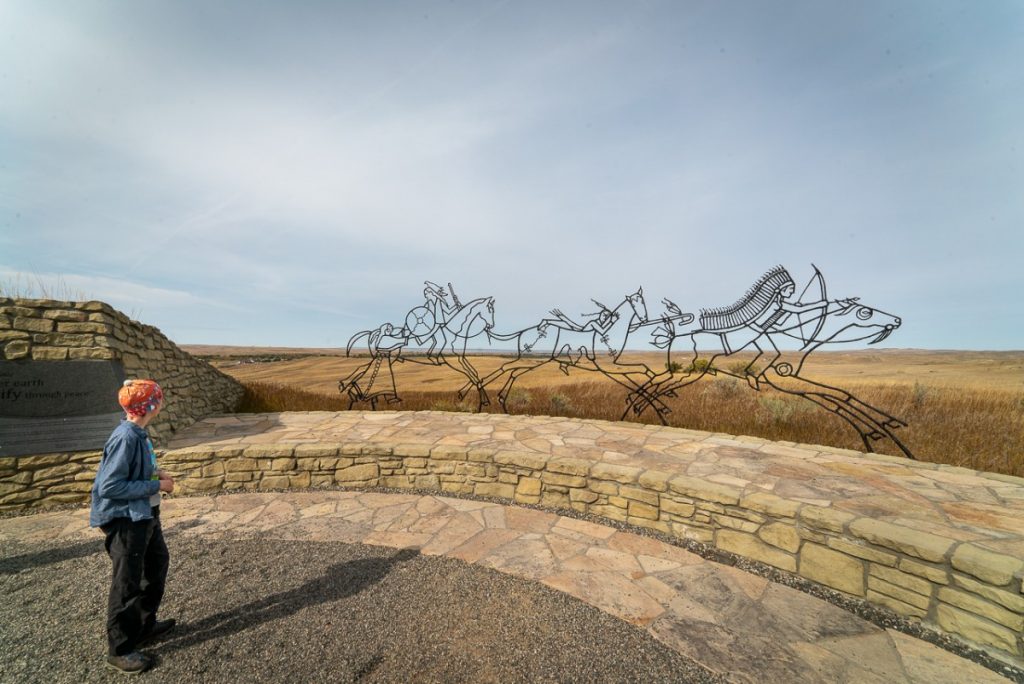 Start at the visitor center and check out the displays. If you didn’t get the map-brochure at the entrance kiosk pick one up here. You can also get the Junior Ranger guidebook (for kids of all ages!) and peruse the visitor center store.

From the visitor center, walk up to Last Stand Hill and the 7th Cavalry Monument. From there cross over to the Indian Memorial and then back to your car.

Next, drive the 4.5-mile tour road to the Reno-Benteen Battlefield and walk the short loop trails there.

There are interpretive signs along the way to help you picture what took place here. Many of them have a phone number that connects to audio narration.

Plan to spend about two hours here. You can see it in less time, though I don’t recommend it.

Little Bighorn Battlefield is open year round for day use. Extreme weather is not uncommon on the prairie. Summer may be quite hot. Watch out for rattlesnakes in summer. Winters can be cold and windy, but there will be the fewest people there and you may have the place to yourself. Snowshoes are available to rent and you can explore the Monument off the pathways.

Read before you go: There are a lot of books about the Battle of Little Bighorn. Crazy Horse and Custer: The Parallel Lives of Two American Warriors by Stephen Ambrose is a good start.

“The Big Hole National Battlefield is the location of the battle that took place on August 9th and 10th during Nez Perce Flight of 1877. By early August, over 800 nimí·pu· (Nez Perce) and over 2,000 horses were passing peacefully through the Bitterroot Valley after crossing Lolo Pass into Montana. Their leaders believed the military would not pursue them even though many had premonitions warning otherwise.

“When the nimí·pu· arrived at ?ıckumcılé.lıkpe (known today as Big Hole National Battlefield) on August 7th, they did not know the military was close behind them. On the morning of August 9, 1877, U.S. troops surprised the sleeping nimí·pu· with a dawn attack on the encampment.” – NPS

By the time the smoke cleared on August 10, almost 90 Nez Perce were dead along with 31 soldiers and volunteers.

Start at the visitor center and watch the movie and peruse the museum. In summer there are guided ranger walks. You can pick up Junior Ranger information here too. The visitor center hours are seasonal, so check before you go.

Watch out for rattlesnakes in summer. In the winter, the road leading to the lower parking lot and trailheads is closed to vehicles but remains open for use via snowshoes or cross-country skis.

Read before you go: Battle of the Big Hole: The Story Of The Landmark Battle Of The 1877 Nez Perce War by Aubrey Haines and Calvin Haines 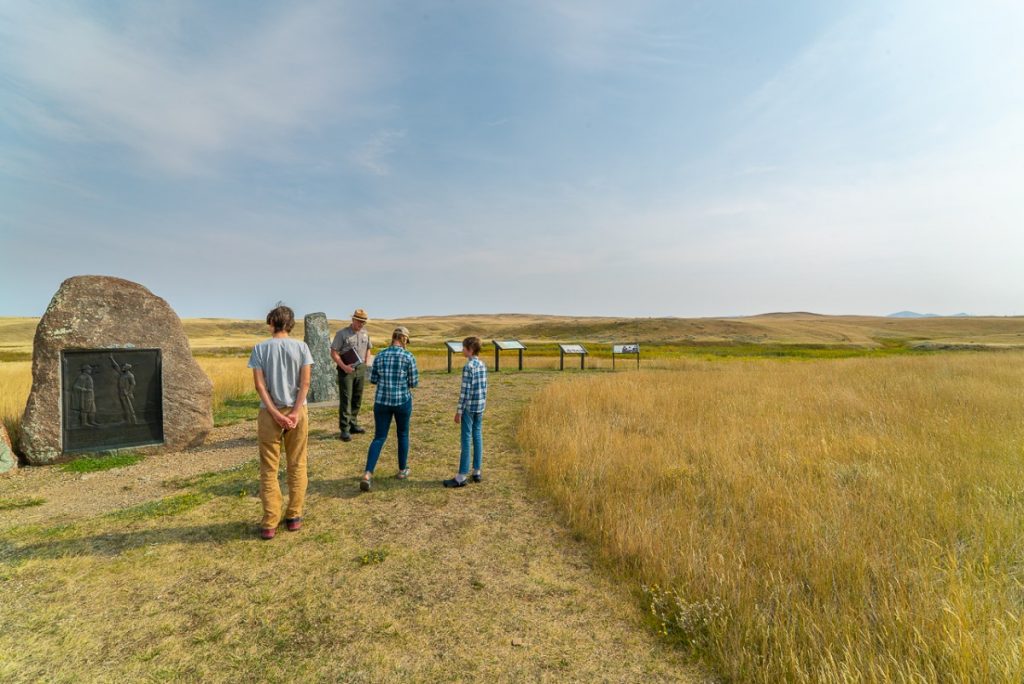 What Happened at Bear Paw Battlefield

Bear Paw Battlefield is another site in the Nez Perce National Historical Park. It’s where the final battle and siege of the Nez Perce flight took place.

“It was here on October 5th, 1877, after an 1,100 mile journey and only forty miles short of the Canadian border, that the Nez Perce laid down arms. Following this five-day battle and siege Chief Joseph gave his immortal speech, “From where the sun now stands, I will fight no more forever.”” NPS

The Ranger we met with gave us great perspective on the battle-siege. The most important thing I learned was that both sides agreed that they were tired of fighting. It wasn’t a surrender. The Nez Perce thought they would get to go home, keep their weapons, and have their freedom; they believed they had an agreement. A letter from a commanding officer arrived after the agreement was made and said almost exactly the opposite.

White Bird and some others made it across the border to Canada, but they were unprepared for winter after the 1,1000-mile flight (often covering 40 miles a day!) and they didn’t fare well either. 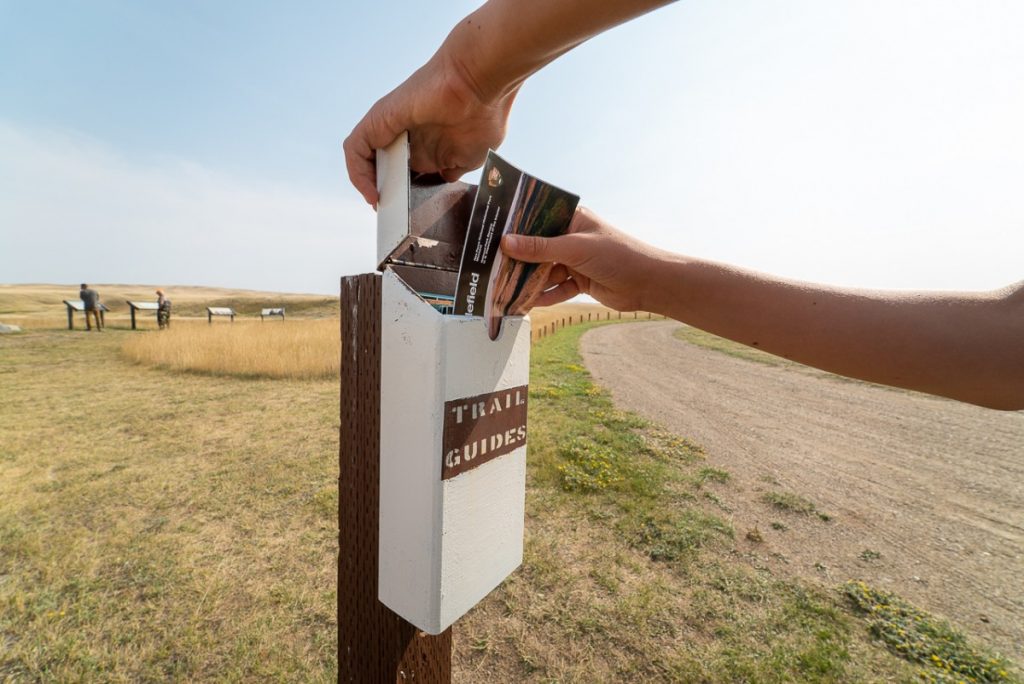 How to Visit Bear Paw Battlefield

There isn’t a visitor center or other building, but there are a couple vault toilets and picnic tables.

There is a 1.25-mile interpretive trail. Pick up a brochure-map at the battlefield or download one ahead of time from their website.

It’s exposed out there; it could be hot, windy, or bitterly cold and sleeting as it was for the Nez Perce. Watch out for rattlesnakes in summer.

Rangers are available on site in the summer months to offer guided tours of the battlefield. In the off-season, call (406) 357-3130 or email prior to your visit if you would like a ranger to join you at the battlefield.

Read before you go: Chief Joseph & the Flight of the Nez Perce: The Untold Story of an American Tragedy by Kent Nerburn 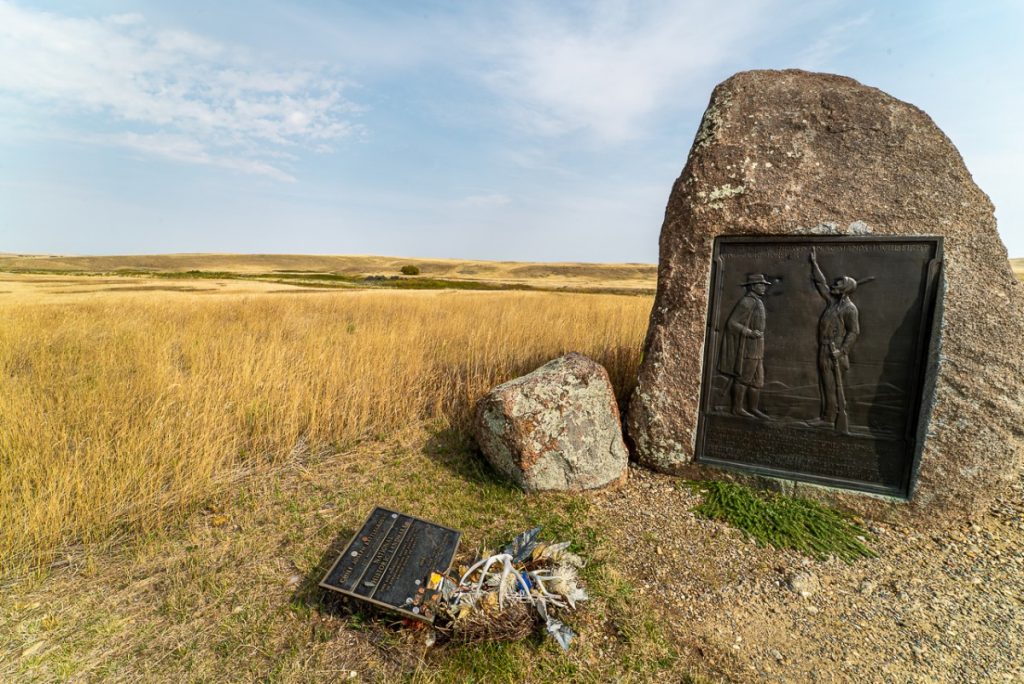 Books About the Indian Wars in Montana from Indian Voices

A Cheyenne Voice: The Complete John Stands in Timber Interviews by John Stands in Timber and Margot Liberty – The complete transcribed interviews of Northern Cheyenne elder John Stands In Timber (1882–1967). Along with memorable candid photographs, it also features a unique set of maps depicting movements by soldiers and warriors at the Battle of the Little Bighorn. He also discusses the Battle of Rosebud and many other events related to the Cheyenne.

Custer’s Scouts at the Little Bighorn: The Arikara Narrative by Arikara Scouts and Orin Libby — Custer rode into the Battle of Little Bighorn with Arikara and Crow scouts. This book is the account of the nine survivors who were interviewed in 1912. Their stories were translated and published in 1920 and appear here. 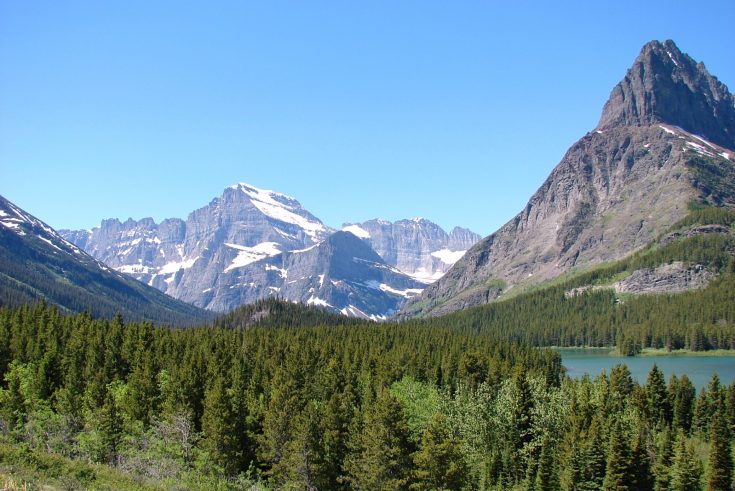 Things To Do In Montana

Whether you are planning a once in a lifetime trip to Montana or a weekend getaway, this article share the unique, wonderful, popular, and only-in-Montana things to do.