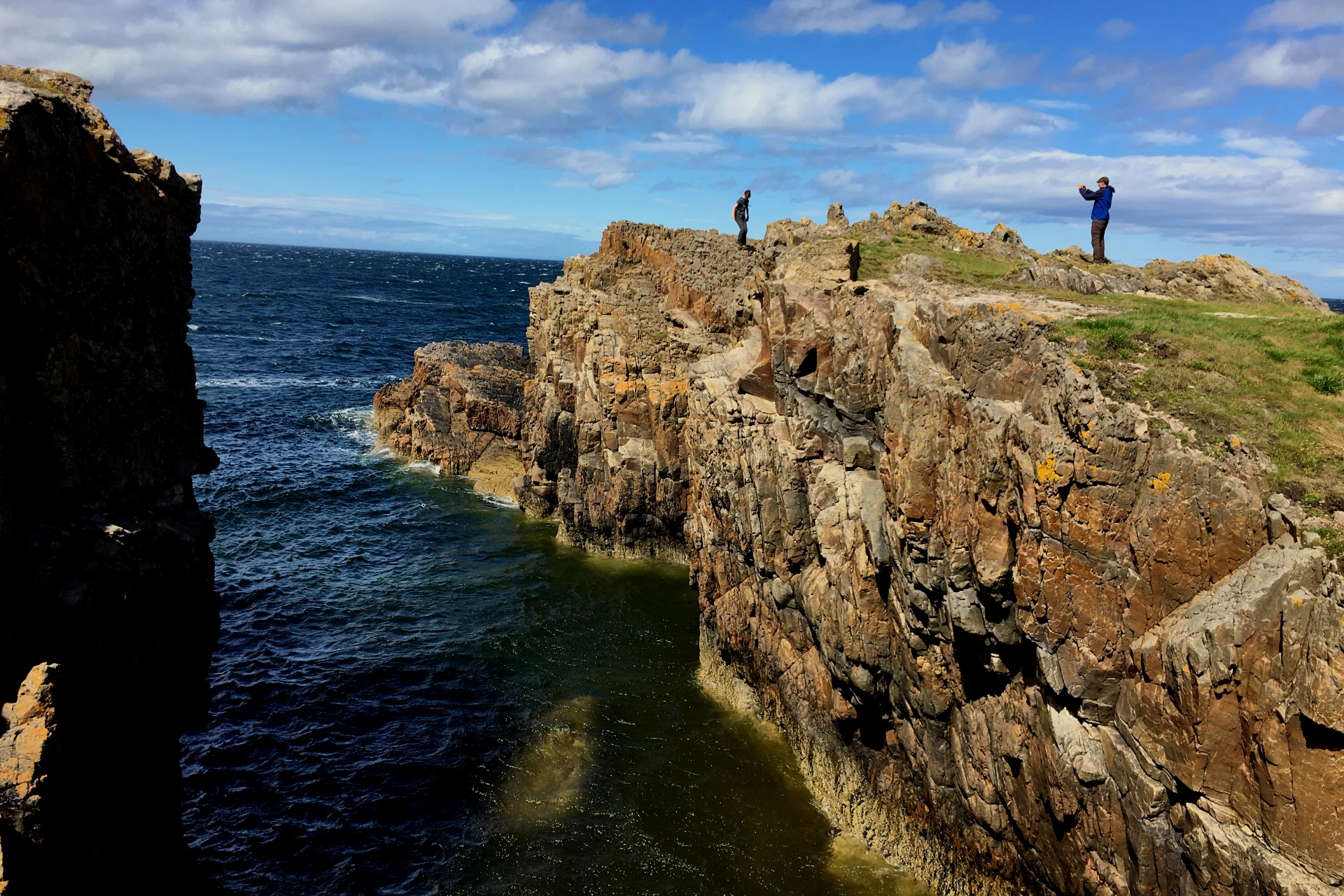 Cullen, Scotland has to be one of the best off the beaten path locations in Scotland. We chose to spend a month there for several reasons: we wanted a place in Scotland without midges, and we were looking for sunshine. Once I did a little more research, I found that the Moray Coast Trail goes right through Cullen and that it looks like it is among the best walks in Scotland.

It turns out, there really aren’t many midges around here (tiny, biting, insects), but its reputation as the “Sunshine Coast of Scotland” doesn’t always hold true. It rained a majority of the days we were there during the month of June. Apparently the previous summer was hot and sunny, so you never know. And climate change is messing everything up, so you really never know.

We didn’t let the rain keep us from exploring the coastal walks in Scotland or the many other walks in Moray.

Where is Moray in Scotland? 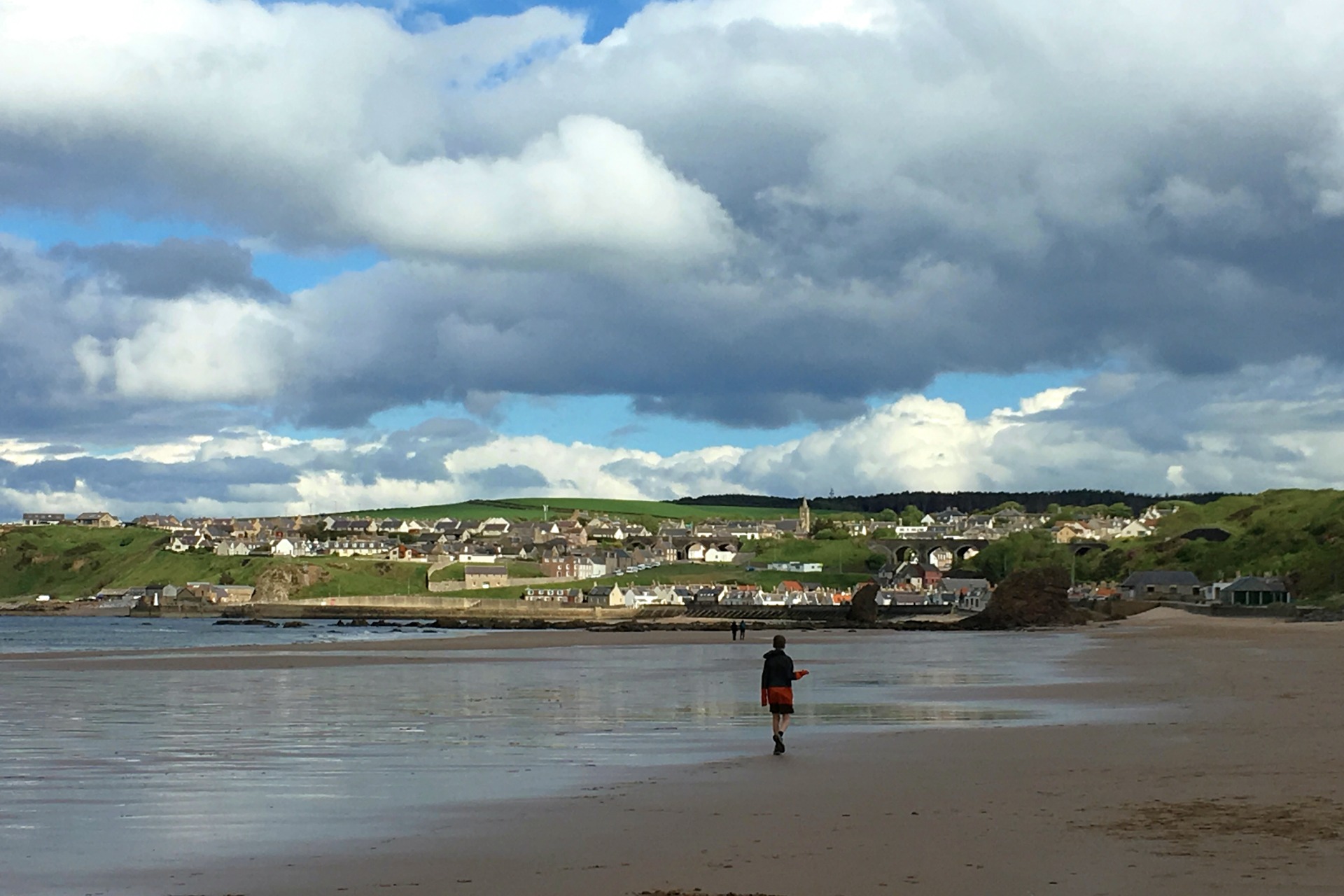 Moray is a council area in the northeastern part of Scotland. Its coastline runs along the Moray Firth (a narrow inlet of the sea) and it borders the council areas of Aberdeenshire and Highland.

This map of Moray Scotland shows you the “major” towns in Morayshire, including Forres and Cullen, the terminal towns on the Moray Coast Trail. 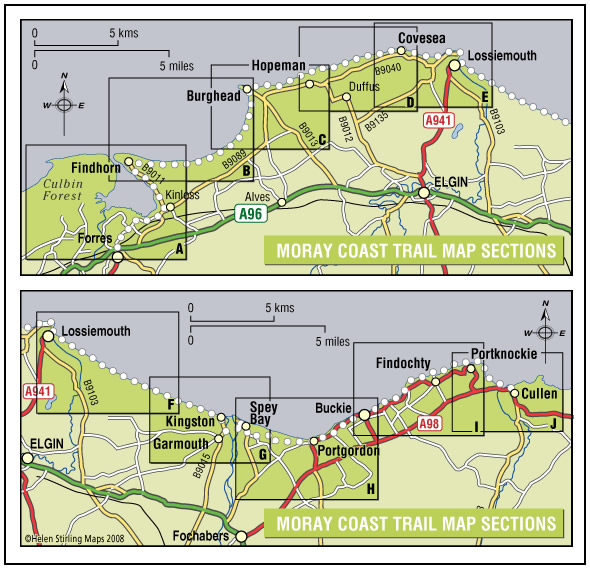 There are many adorable beach towns in Moray. We chose Cullen because of its long, lovely beach. And we found a cottage to rent there. Once we arrived, I started finding Moray walks in abundance, many of which we could access right from our cottage. 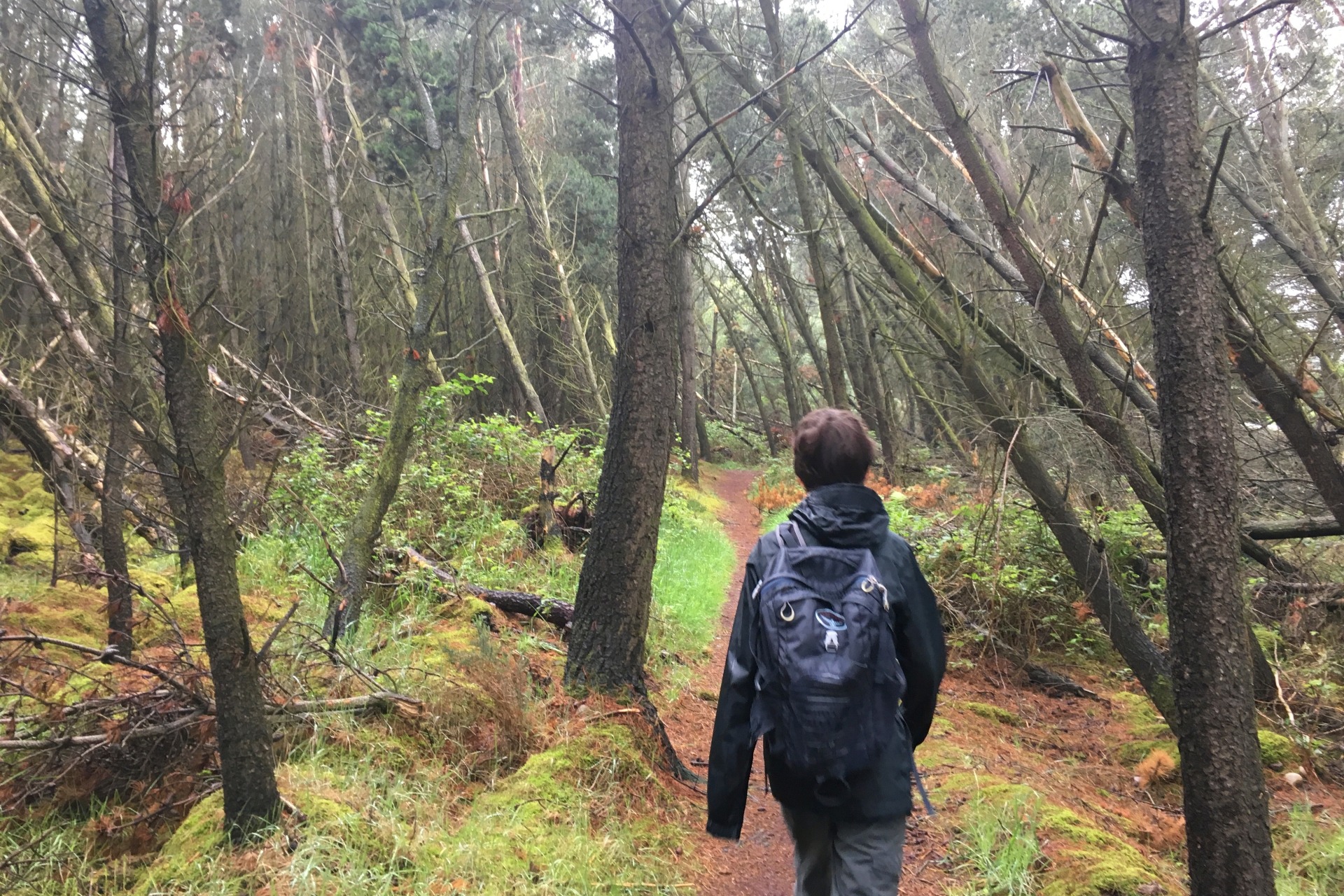 Walking is quite popular and the Scotland walking trails are well signed and easy to follow. The Moray Coastal Trail is no exception. People come from all over to wander the shoreline, duck through little copses, photograph sea stacks and cliffs, and watch the famous Moray Firth dolphins frolic in the North Sea. It may not be the most well known, but it is definitely on of the best hikes in Scotland. 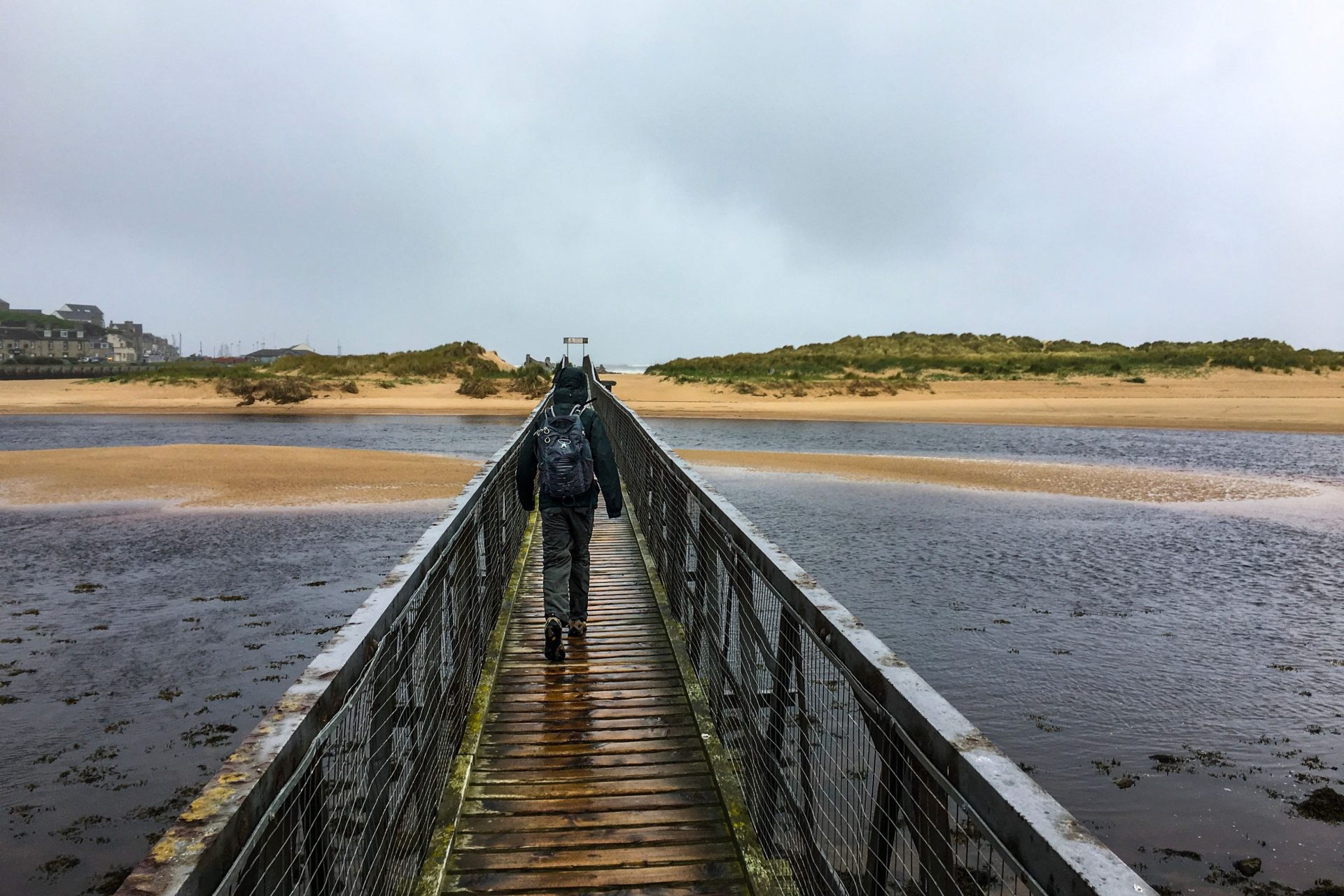 How To Walk the Moray Coast Trail 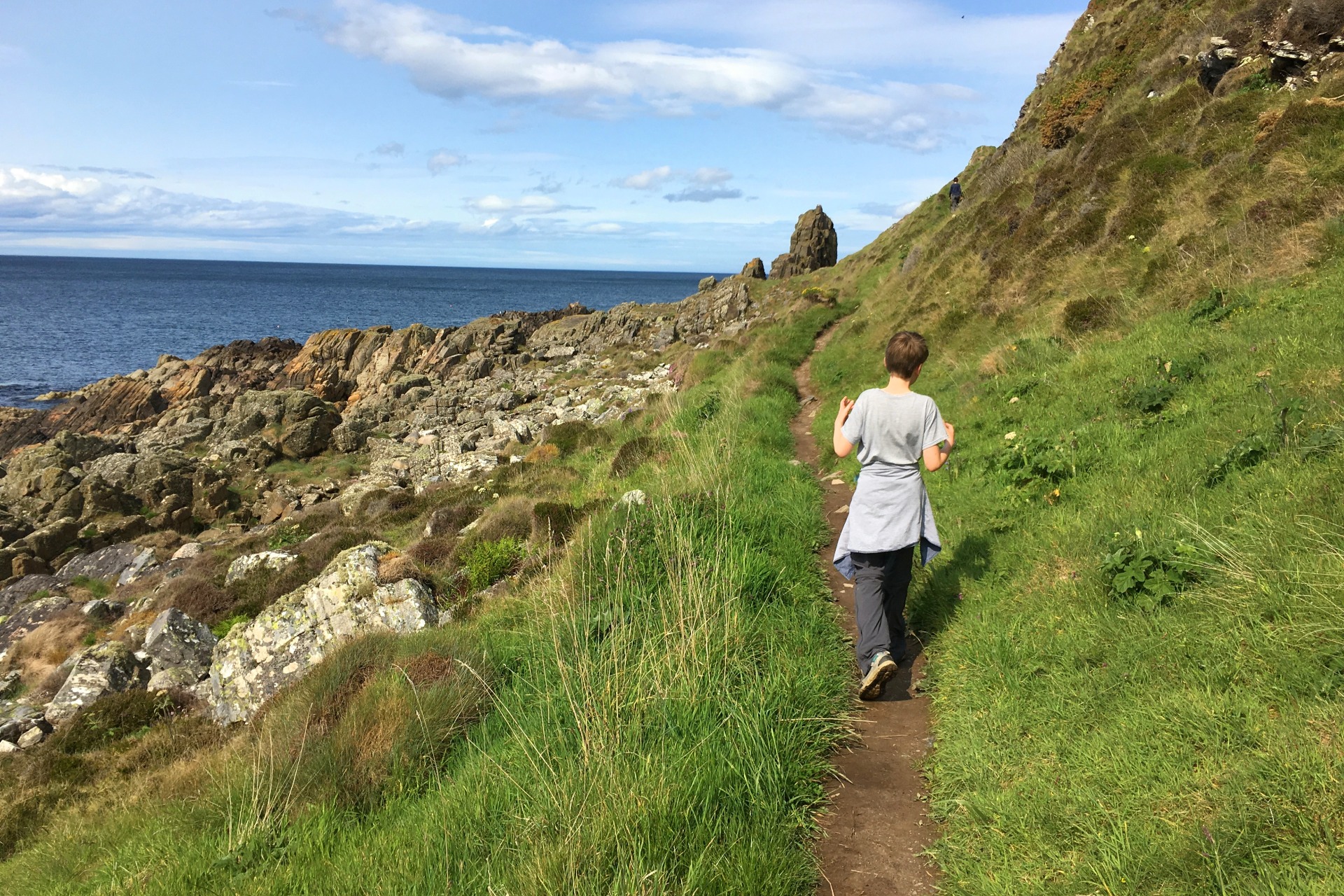 When we travel, a lot of our explorations are on foot. My favorite way to get to know a place is through the landscape. There are so many things to do in Moray that involve walking (there is even a Moray Walking and Outdoor Festival in June, which we participated in!).

Hiking holidays are my favorite and even though we didn’t walk every day, we covered several walking trails in Scotland. We only walked sections of the Moray Coast Trail, but we covered more than half of it, plus a continuance of the trail past Cullen.

Getting Between Sections on the Moray Coast Trail 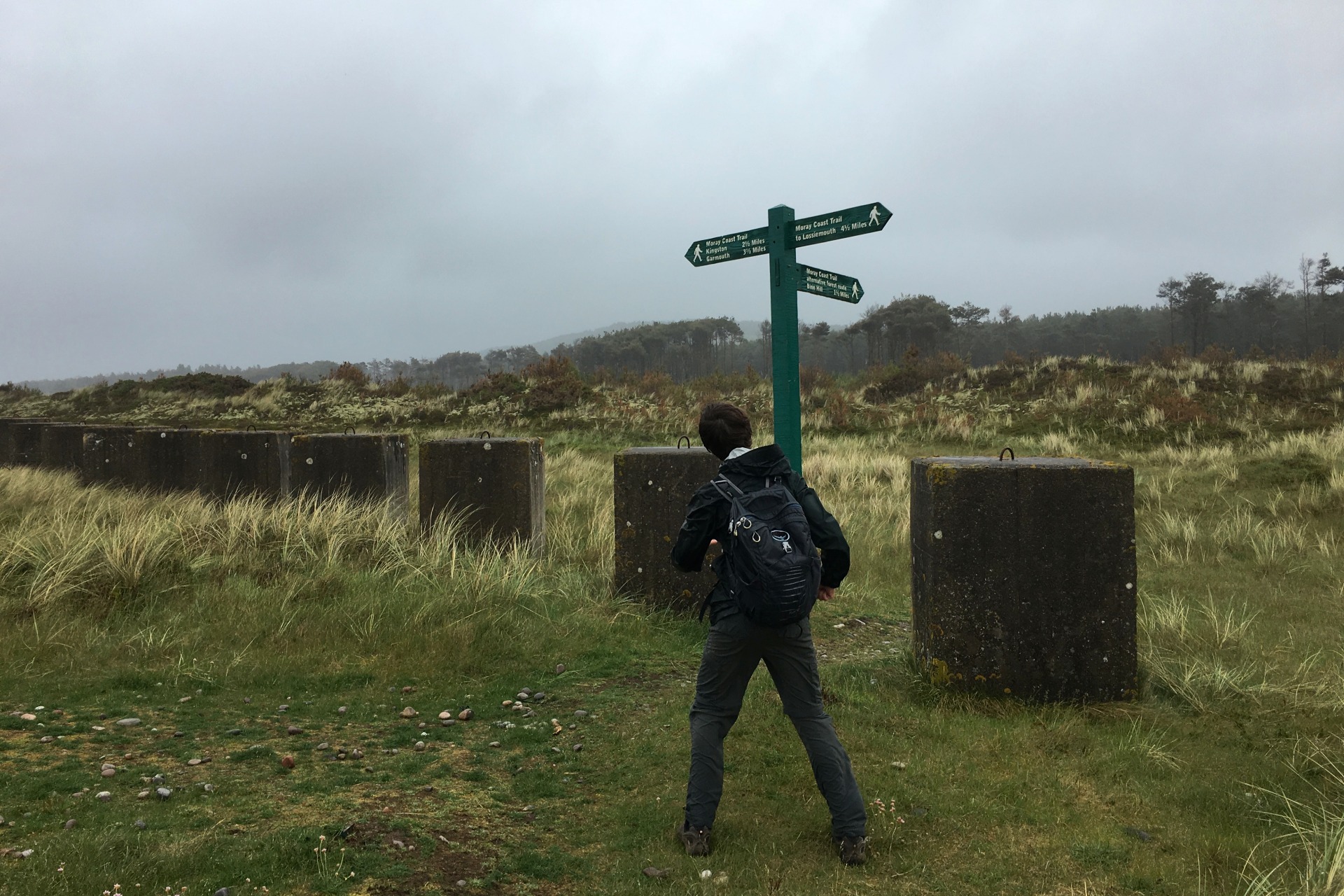 We used the public bus to access different parts of the trail. All four of us walked the Buckie to Cullen section, so we took the bus to Buckie, then walked back to our Cullen cottage.

Anders and walked the Lossiemouth to Buckie section, so we left the car in Buckie, took the bus to Lossiemouth (via Elgin), and walked back to Buckie. The bus takes a while and is kind of expensive for a bus, but it was clean, reliable, and easy to use.

We used Google maps to get the bus schedule, but you can see the Moray bus times on the Moray Council Bus Times page or the Stagecoach site. You can buy tickets online or on the bus. There’s even an app—of course there is—where you can get tickets and timetables.

If the bus isn’t your thing, you can also use a taxi to get between towns. When Anders and I were having lunch in Garmouth on a very rainy day, we saw some other walkers who decided to cut their day short and grab a cab back to their hotel. Moray weather is tricky, so it’s good to have a way out if you need it. 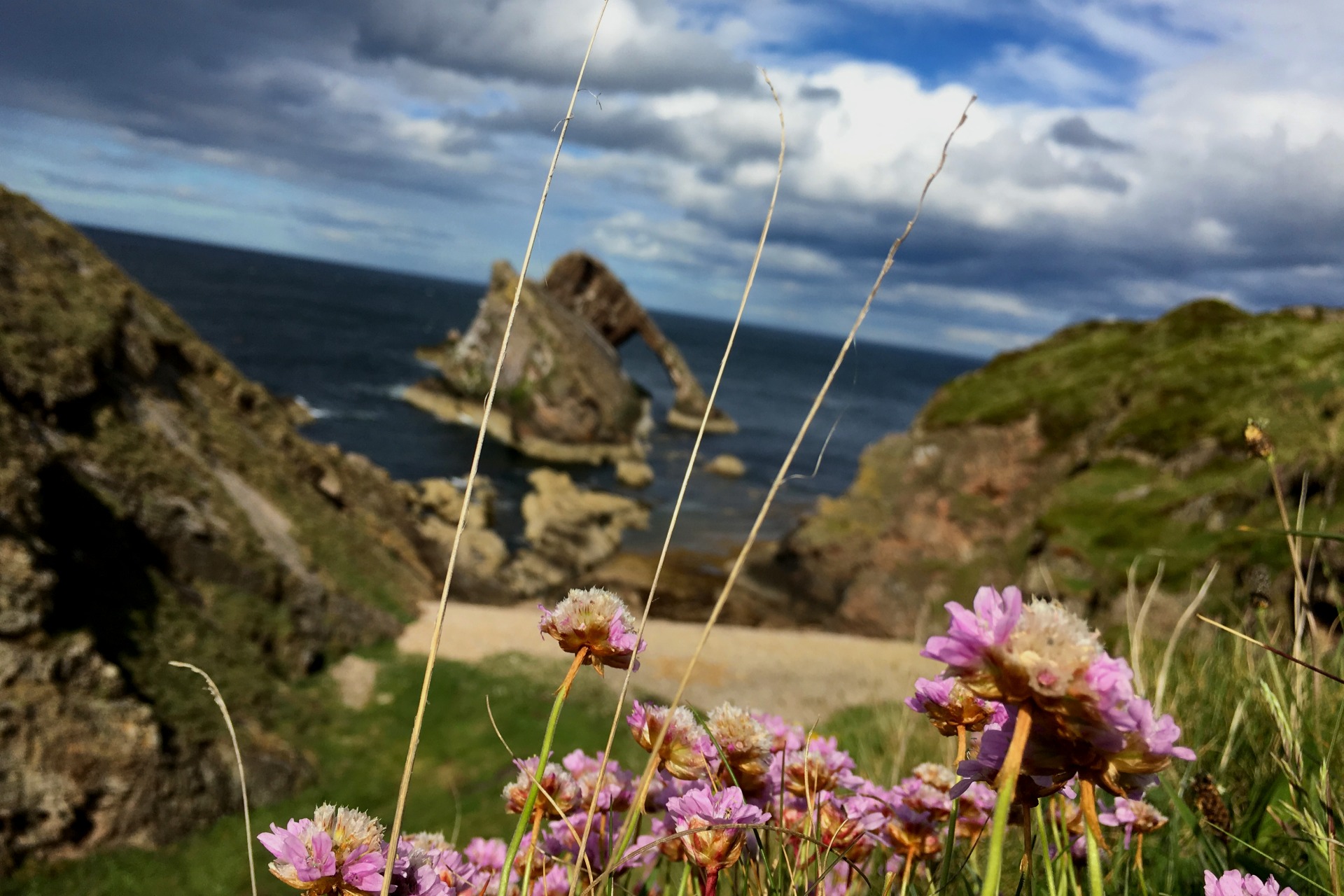 We used a spiral bound book called Moray Coast Trail: With Dava Way and Moray Way by Sandra Bardwell. There is a great flip down map, detailed descriptions of each section, information about flora, fauna, geology, and history of places along the Moray Coast, Scotland.

Even though the trail is well marked, we pulled the book out a couple times to double check where we were supposed to go or just to read about the area. Plus, you always want a map when you are hiking in Scotland or anywhere else. The map key indicates where there are places to eat and toilets, among other things, so that’s quite helpful. 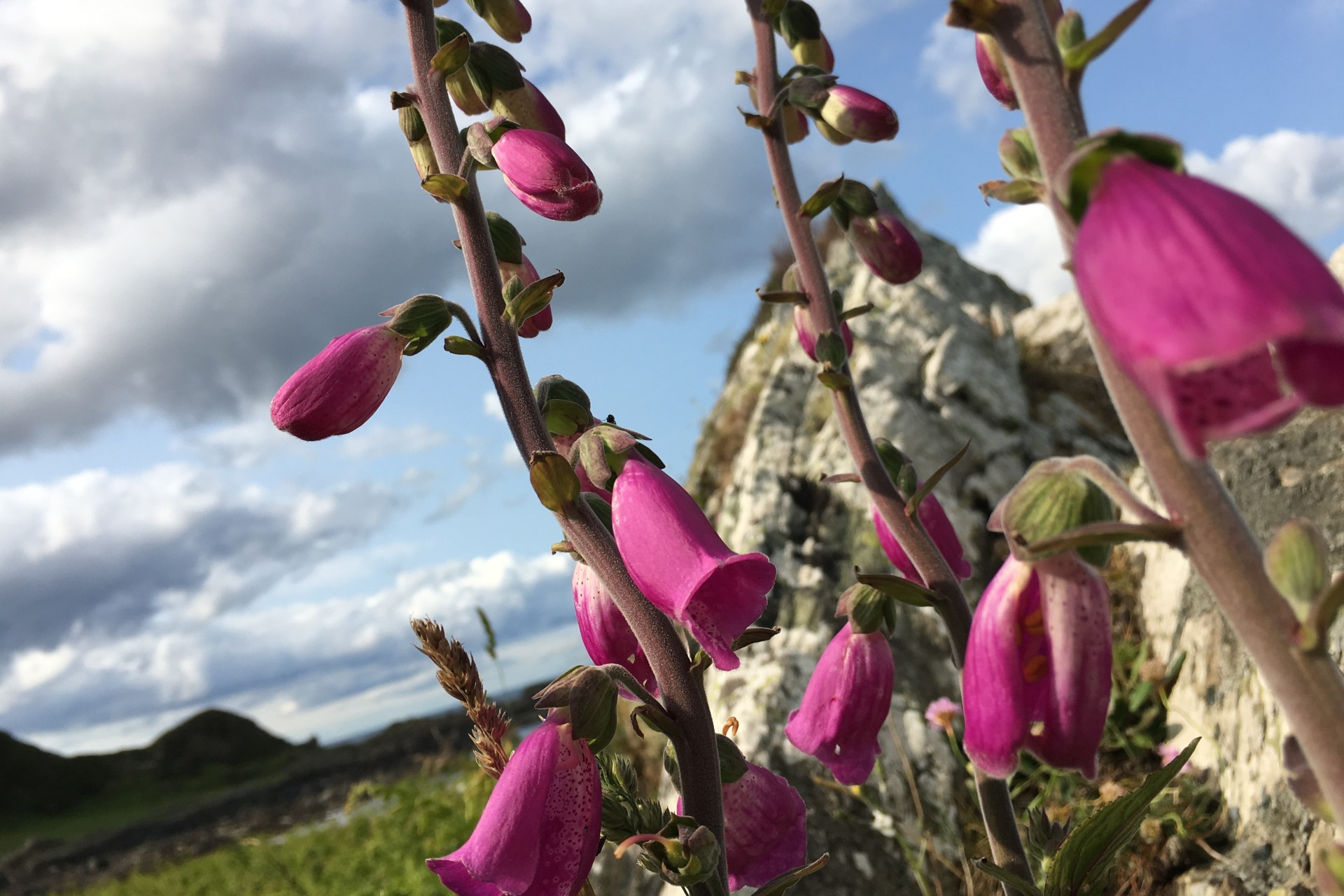 Which Direction to Hike The Moray Coast Trail?

I suggest hiking from west to east. This way the prevailing wind is behind you. Some days, this won’t matter, but Anders and I were really glad to have the wind and rain at our back on the stretch from Lossiemouth to Buckie.

If you are hiking the whole trail, you may want to start in Forres and end in Cullen just because the scenery gets better and better as you go east. Don’t get me wrong, the whole thing is lovely, but the first 5.5 miles is inland and the last section is all cliffs, sea stacks, viaducts, and beautiful beach. 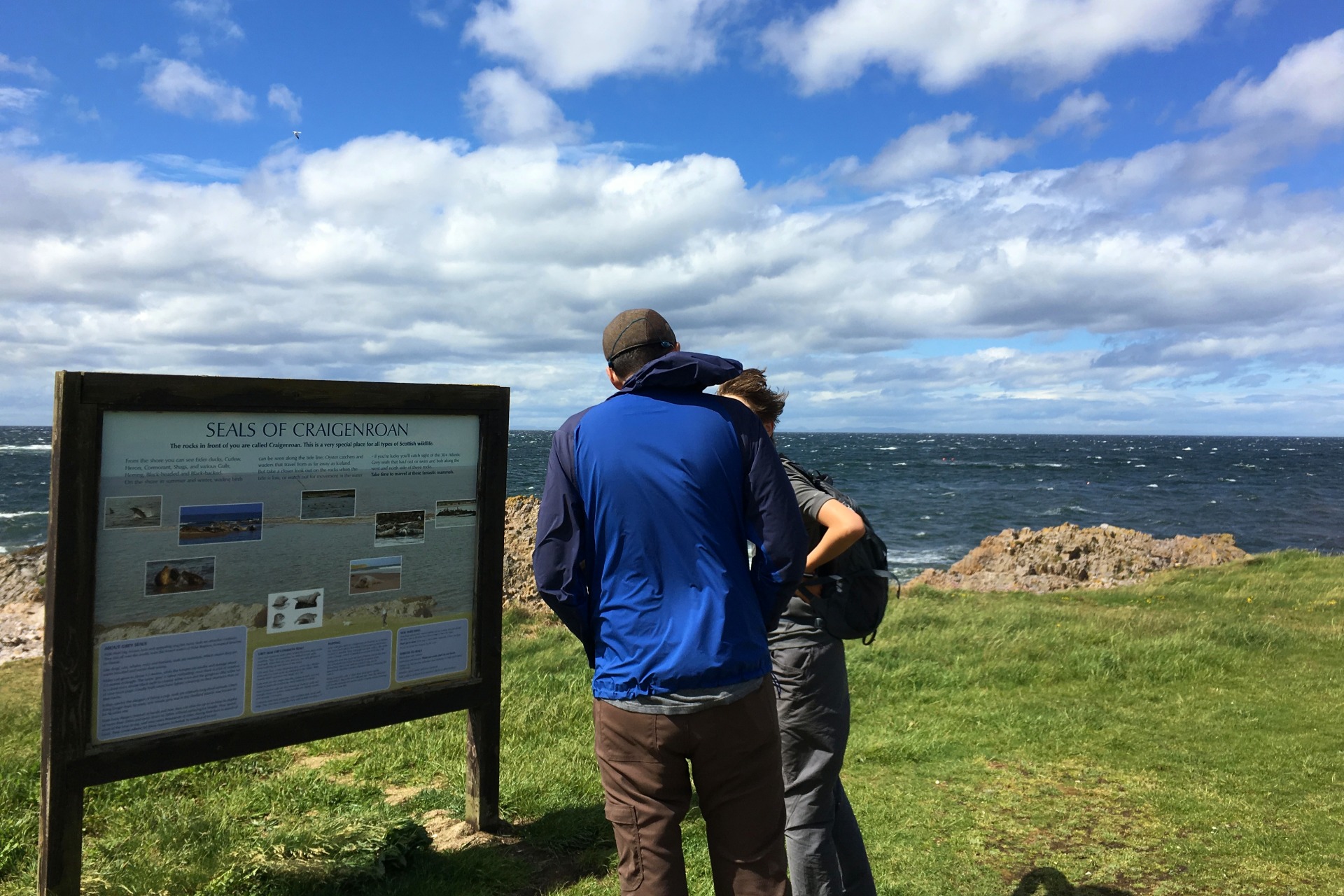 Walking tours in Scotland usually pass plenty of cafés, pubs, and restaurants. The Moray café scene is pretty good, so you will have plenty to eat along the way.

We didn’t eat in every town, but some restaurants along the Moray Coast Trail we really like include:

Watch your time as some places don’t serve food between 2 pm and 5 pm. We found this out when we walked into Findochty (pronounced Fin-ech-ti) at 3 pm and had to make due with drinks at the Admiral’s Inn. Fortunately, we had snacks with us and supplemented with local beer and Irn Bru. (I think Scottish walking holidays require a mid-walk stop for beer or a wee dram of whiskey.) 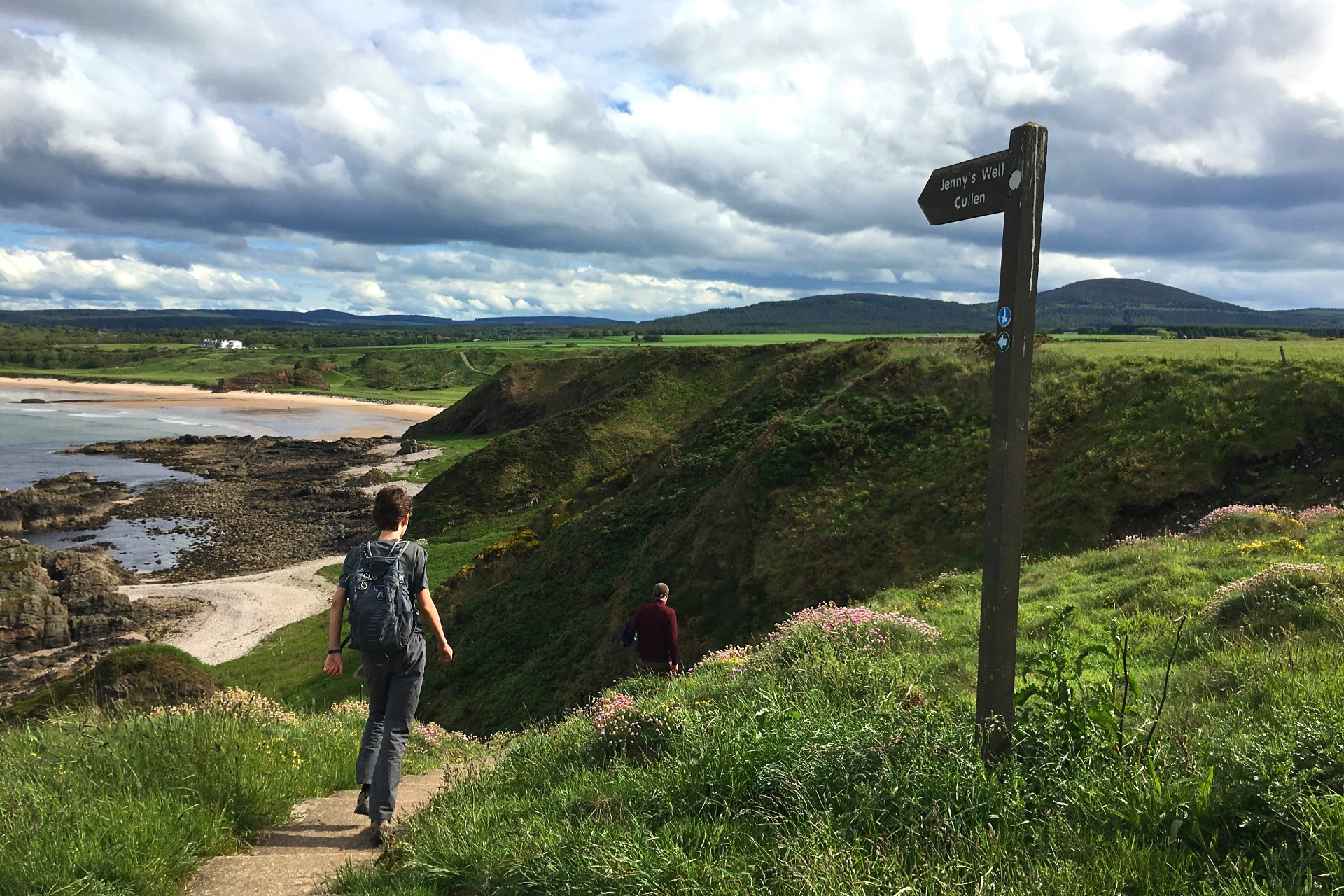 Things To Do Along the Moray Coast Trail

The main point of a Scotland hiking trip is to walk, but there are lots of things to do in Moray right along the trail. You will see so much from the trail, so these are just a few places where you might want to duck off the trail.

Yes, Scotland has a Malt Whisky Trail (we went to some of the distilleries on Henry’s birthday a few years ago and it’s included in my Scotland Itinerary). At the start of the trail, you pass the smallest Moray distillery, Benromach Distillery, established in 1898. They sell the world’s only organic single malt. Also, cool to note is that it is owned by two local men; most of the distilleries in the area are owned by big corporations these days.

The Moray Art Centre has a lovely exhibition space with local art. They also have rooms for people to make art and host art classes. It’s worth peeking in at the art and possibly taking something home to remember your trip.

Located in an old Coast Guard building, the Burghead Visitor Centre has information about the area as well as great views of the Moray Firth. The Burghead headland was the site of a large Pictish Fort where bullstones were found. Two of the remaining six bullstones are in the visitor center.

Located on the edge of Spey Bay where the River Spey meets the sea, the Scottish Dolphin Centre is a great place to learn about the local wildlife. “Enjoy beautiful walks along the tumultuous River Spey, spot a seal or osprey, and discover Spey Bay’s fishing heritage during a tour of the historic Icehouse. Entry to the centre is free.”

If you want the possibility of seeing the world’s largest bottlenose dolphins up close, you can book Moray Firth dolphins boat trips out of Findhorn, Lossiemouth, and several other towns along the Moray Coast. You may also see them as you walk along the Moray Coast Trail. We’ve seen them just steps from our cottage in Cullen Bay.

You have to see a Moray castle when you are in the area. It’s pretty much a rule and one of the most popular activities in Scotland. While there are some amazing castles inland, Findlater Castle is right along the trail, three beautiful miles past Cullen. It’s a ruin out on a tiny peninsula. There is an information sign and a user trail leading to the ruins. It’s pretty sketchy, so be super careful going out to the castle (there’s a great view at the info plaque). 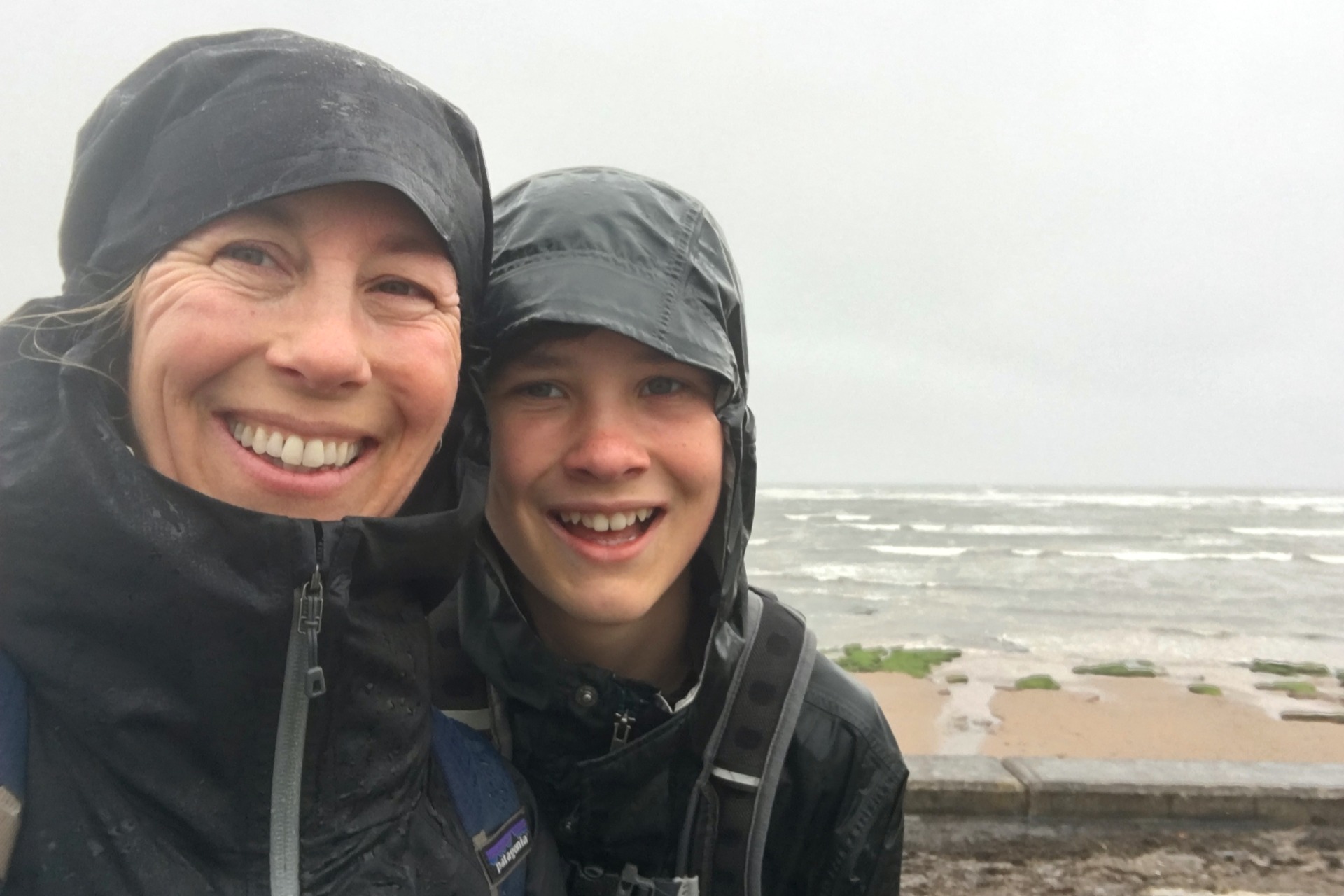 Your Scotland hiking trip is probably going to require a place to stay. All along the trail there are hotels, bed and breakfasts, and Moray cottages.

Elgin is a good base camp for walking sections of the trail as the main bus station is there. The Laichmoray Hotel is one of Elgin’s nicest hotels and is good for families, couples, or singles.

Find current prices and the best deals on hotels in Elgin Moray here.

If you prefer to walk from town to town and spend the night along the way, there are lots of hotels in Moray. We also like vacation rentals or self catering cottages where we can have a kitchen. It’s often less expensive for four of us to stay in a vacation rental than a hotel. 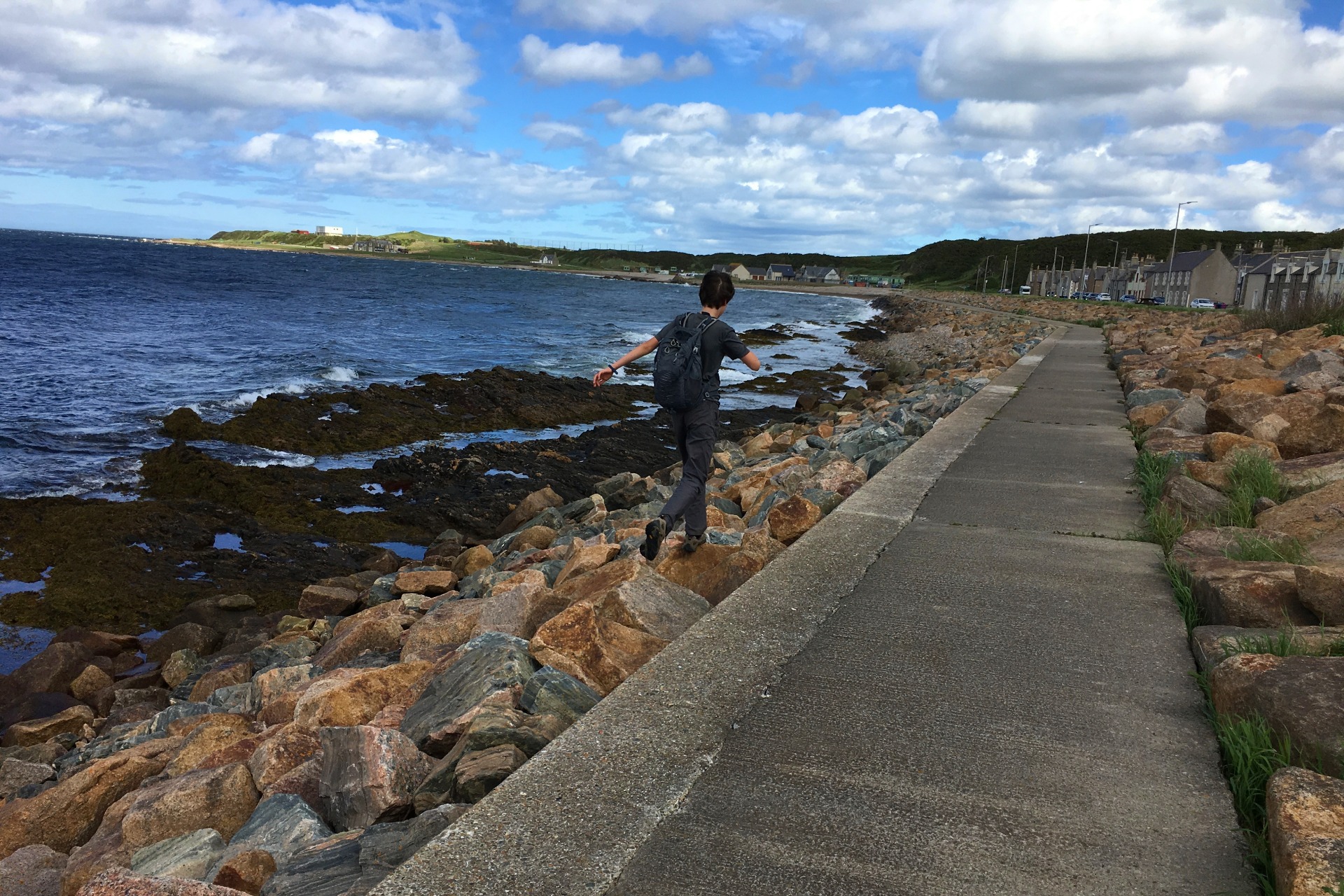 Whichever walking routes Scotland has in store for you, you need to pack for changing weather. This packing list should have you covered. And check out my travel backpacks review or expedition packs review for something to carry your stuff in.

In addition to what you will need during the day, don’t forget your items for overnight. Casual pants and top, pajamas, toiletries, journal and pen, and comfy shoes should be enough.

The Moray Coast Trail is one of the best long distance walks Scotland has to offer. I hope you get a chance to experience it yourself. 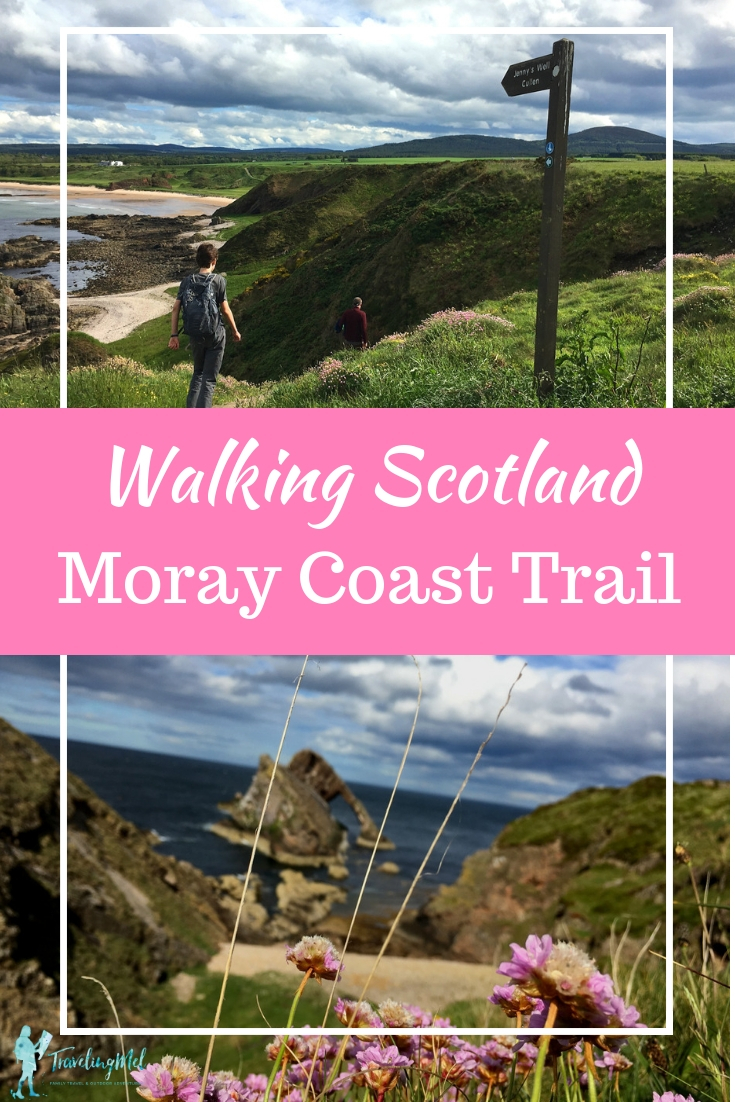 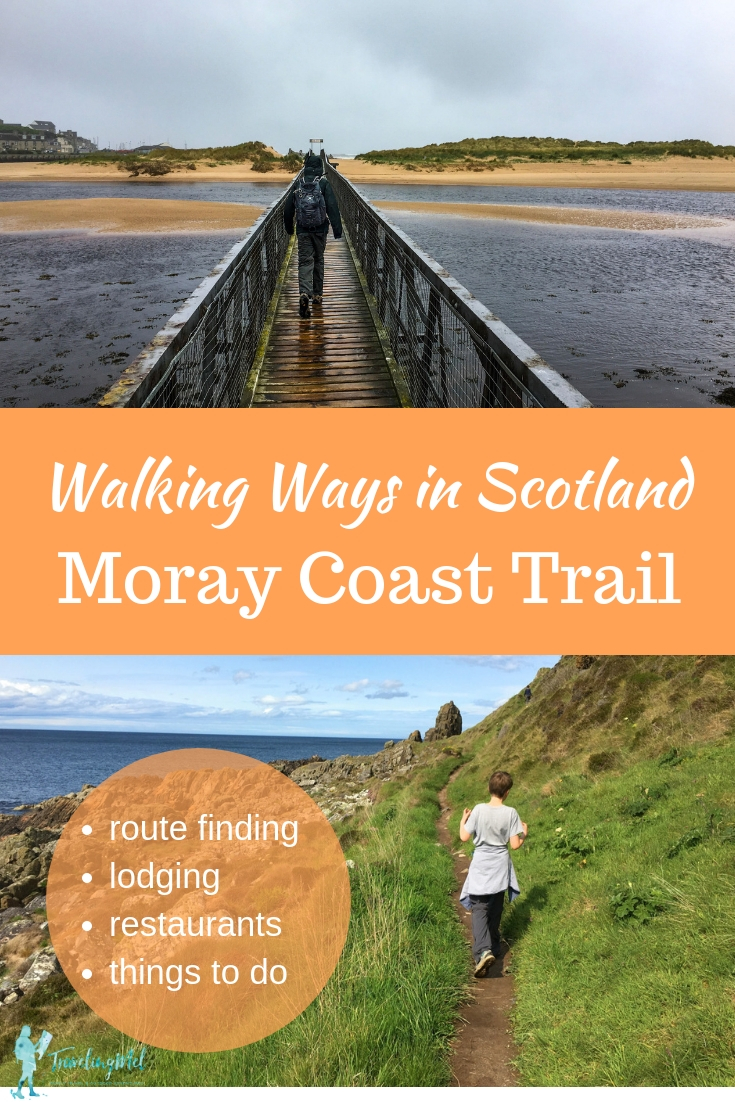