I’m standing on a chunk of Madison limestone in a meadow filled with grass and midsummer flowers. Asters, yarrow, buckwheat, prairie smoke with its Einstein-hair stamens, lupine with pods, yellow paintbrush, buttercups, delphiniums, grass, and piles of horse poop surround the rock and fill the meadow. It’s unexpectedly beautiful up here atop the Pryor Mountains on the Montana-Wyoming border. Trails wind out from the trees surrounding the meadow and lead to a pond dammed by the Bureau of Land Management (BLM). Making the scene even more iconic are the two bands of horses uphill from the pond. They’ve come to drink and are now grazing, seemingly at peace with the world. 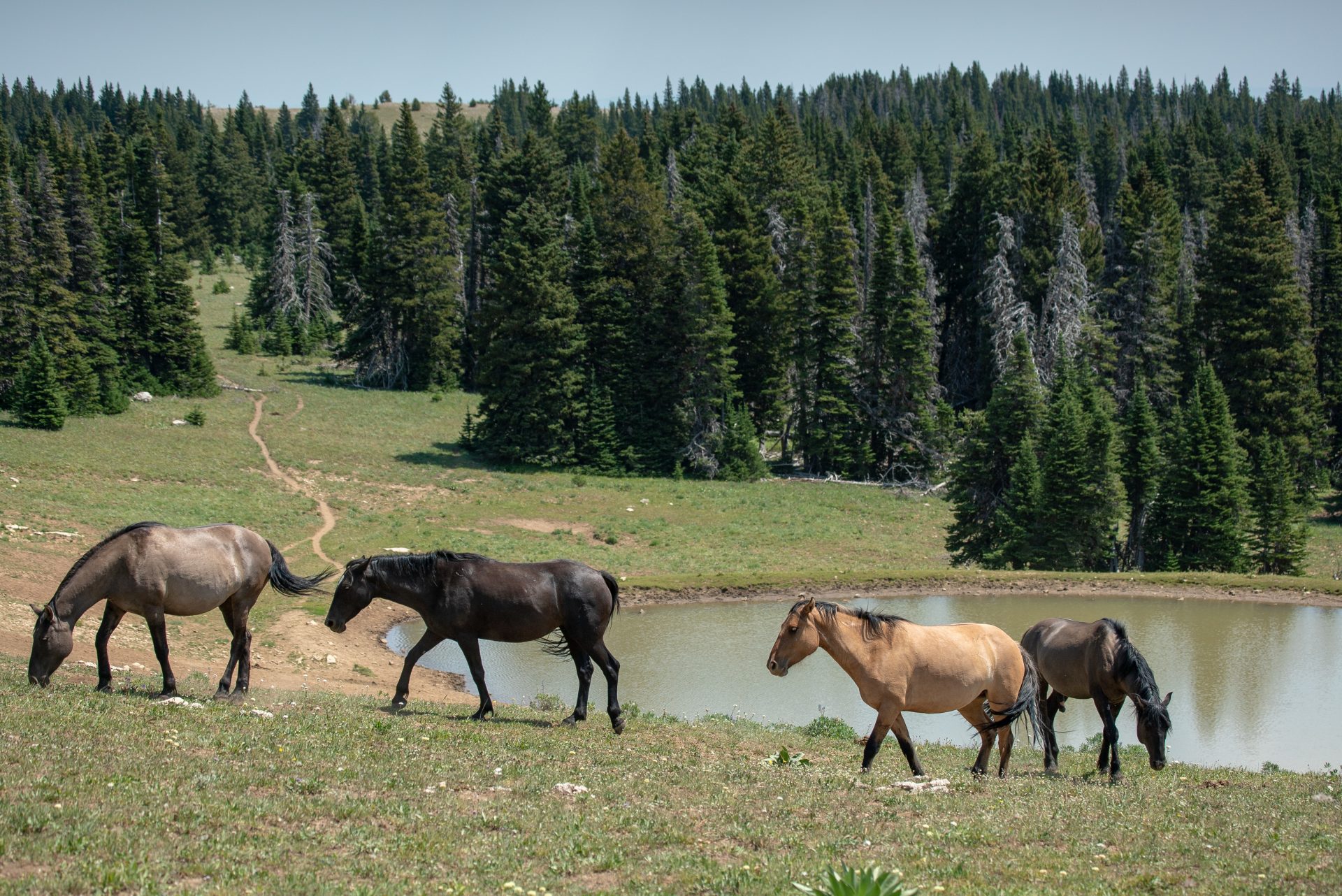 See the story of our first visit to the Pryor Mountains Wild Mustang Center.

Looks are deceiving, of course, and the horses are on ultra-high alert. These wild mustangs are part of the 150 or so that currently live on the Pryor Mountain Wild Horse Range Herd Management Area (HMA). The mustangs (another term for wild horses) are really more feral than wild. They are managed by the BLM as wildlife — sort of, but more on that later.

The Pryor Mountain Wild Horse Range was established in 1968 as the first public wild horse refuge in the U.S., making 2018 its 50th anniversary. The range is within the Pryor Mountains, most of which is on the Crow reservation, but parts are public lands managed by the BLM, Forest Service, and National Park Service.

The range wasn’t always dedicated to horse preservation. In the 1960s, the BLM wanted to remove the mustangs from the Pryor Mountains to “improve” the range. The people of nearby Lovell, Wyoming, didn’t like that idea. The Reverend Floyd Schwieger and other local residents formed the Pryor Mountain Wild Horse Association as the predecessor to the Pryor Mountain Wild Mustang Center in Lovell. They felt, as many do today, that wild mustangs are an important part of Western culture. The horses seem to capture the imagination of so many people and serve as icons for the Wild West. 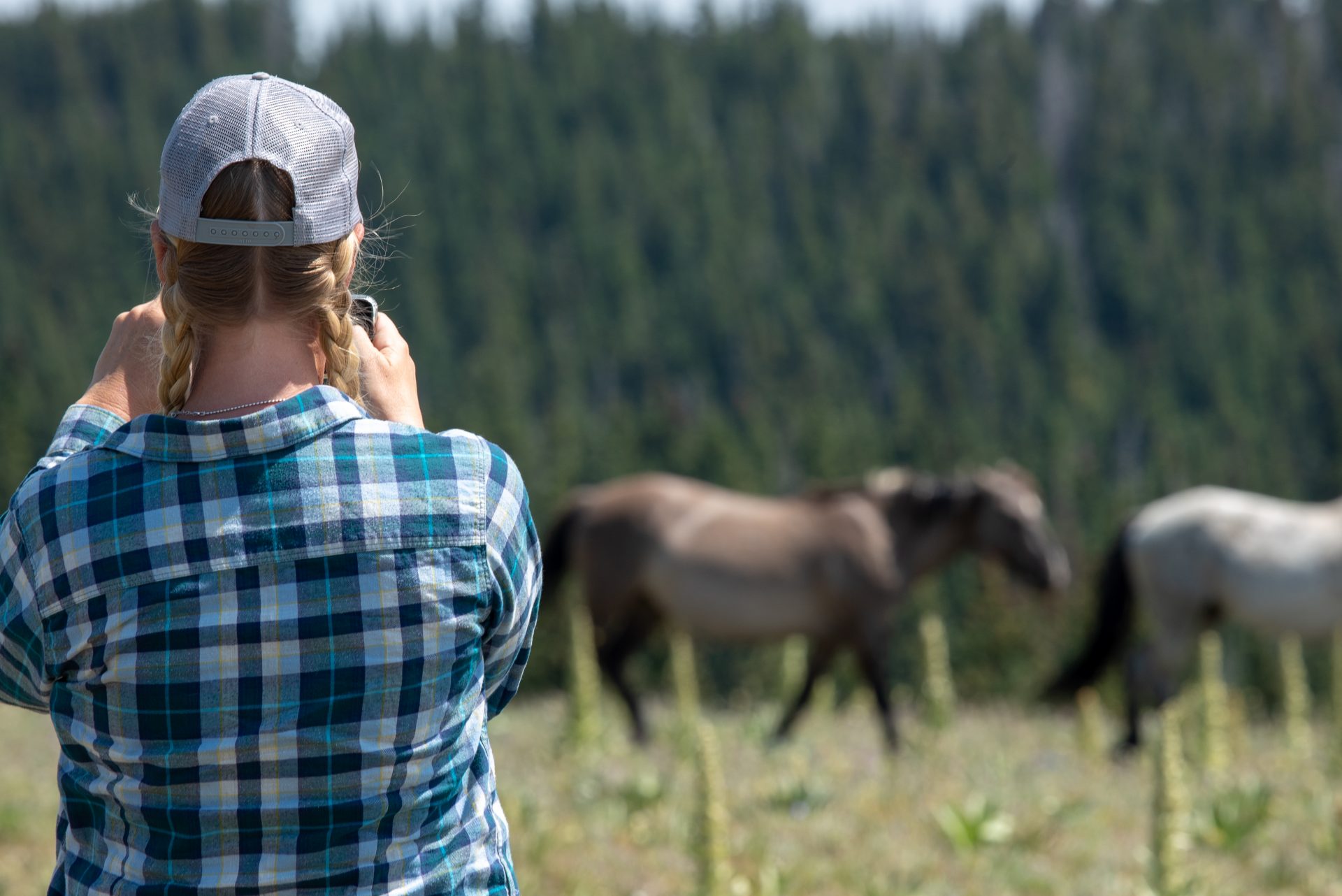 As I stand on the horse range, which Department of the Interior Secretary Stewart Udall established 50 years earlier, a third band of mustangs, led by a stallion named Jasper, walks out of the trees and down to the pond for a drink. The other bands keep grazing, but turn an eye toward Jasper and his mares.

I walk over to a picnic blanket next to a small table set with lunch fixings. Nancy and Steve Cerroni, owners and guides for PryorWild, took two hours to drive us 12.5 miles to this mountain-top meadow. We munch on sandwiches, potato salad, chips, and cheesecake while we watch the horses. 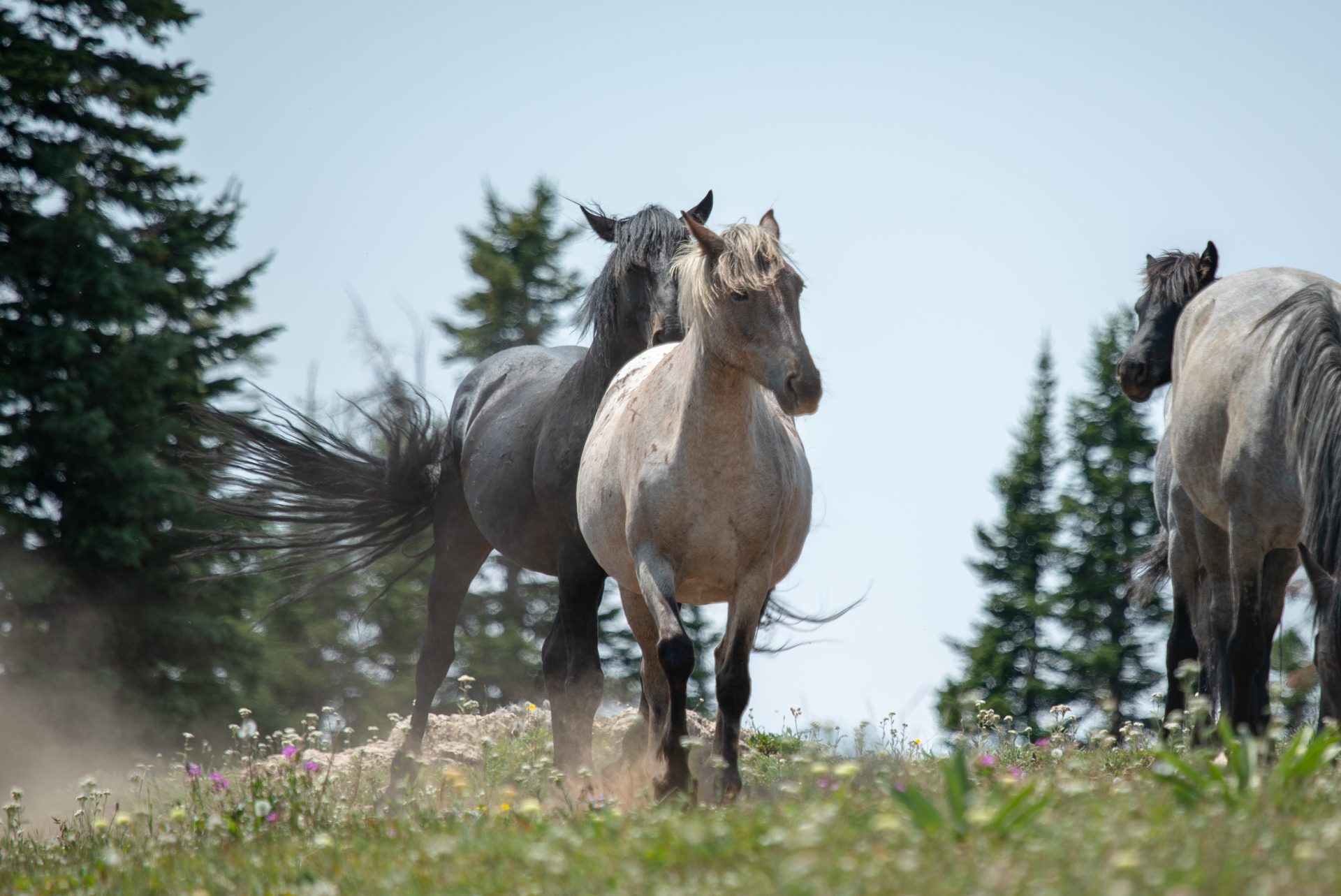 Nancy has lived in Lovell her whole adult life. She loves the horses and reportedly “bugged” Schwieger to get her into the mountains. “These horses have this way of capturing your heart,” she says. Nancy writes educational materials and takes photos to tell the horses’ stories. Before he died, Schwieger asked her to be the local advocate for the horses. “It’s quite an honor and quite a heavy mantel,” she admits.

The Cerronis started PryorWild when the Wild Mustang Center was feeling financial strife. They thought tours would be a great way to bring revenue to the center and the horses. Though a private company, PryorWild donates part of its proceeds to the center and pays the BLM for permits. Nancy does this partly because she has a sense of responsibility from the promise she made to Schwieger. But she also “loves being outside, loves watching wildlife, and enjoys being there to follow their stories from birth to death.” 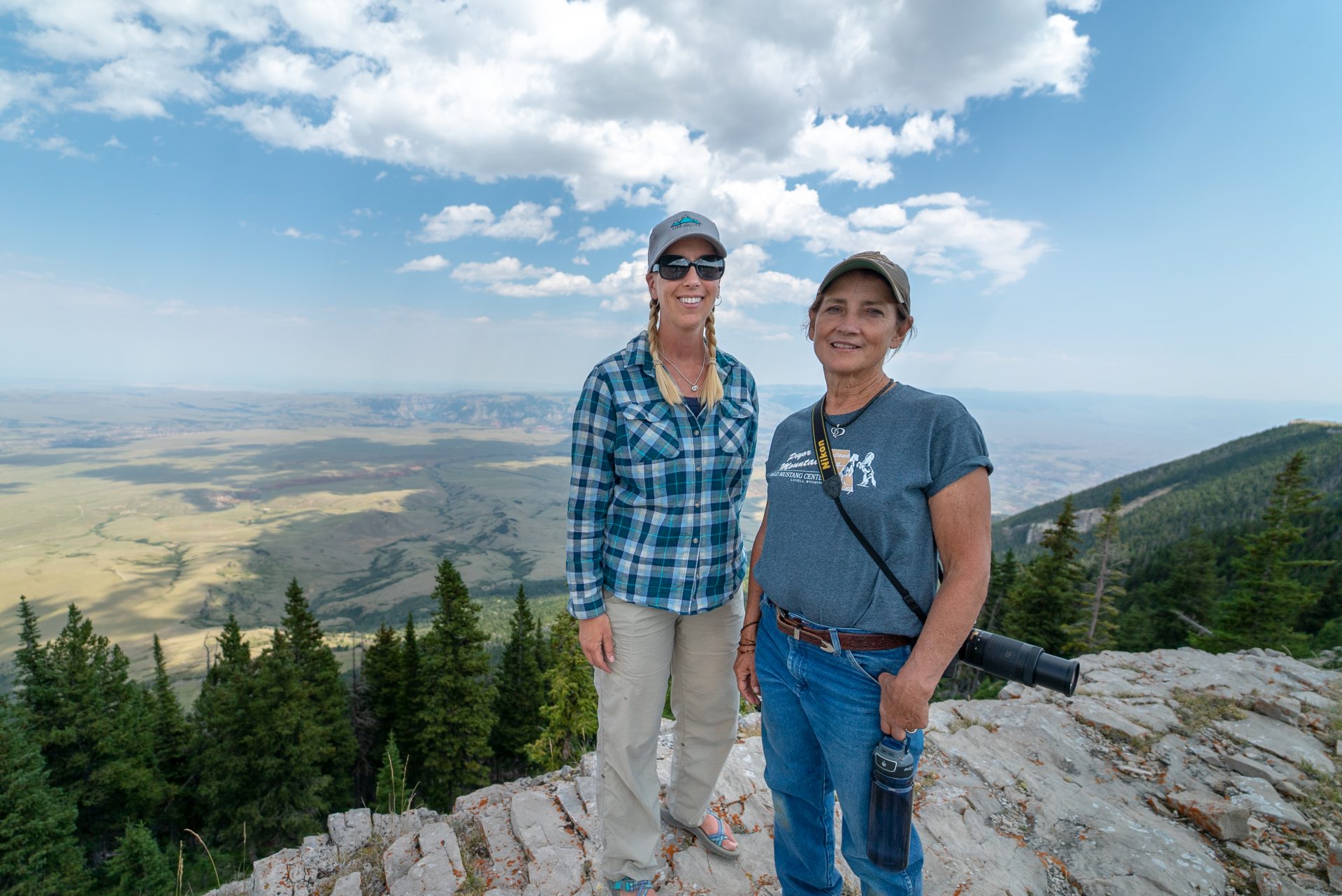 As we eat, two additional bands, along with two bachelor horses, appear from the trees and saunter down to the pond. The bachelors ramp up the tension as they are on the lookout for a band to take over. Their telltale scratches and cuts, plus a limp for one of them, alert us to the fact that they’ve been fighting with the established stallions in an effort to steal mares and form their own bands.

The Cerronis talk about the horses as if they are characters in their favorite show. Or even friends. They reminisce about the funny things a horse did and how a newborn survived a winter against improbable odds. They discuss fights and births. They know the individual histories of these horses and can name every one on sight. They aren’t the only ones. During this short stay, I run into several people who come to the horse range annually to see what the horses are up to. 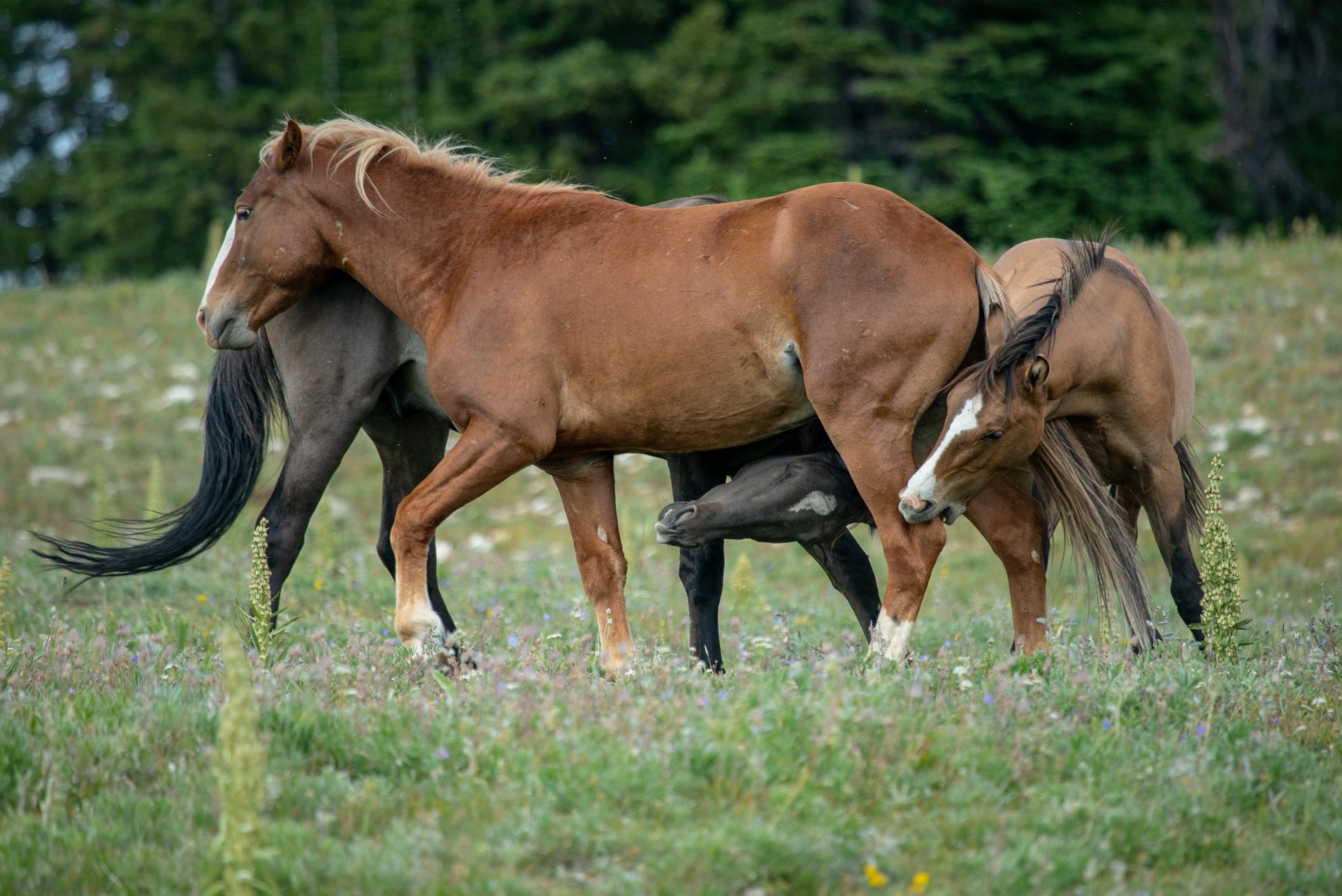 Now there are six bands around the pond. Mustangs keep materializing out of the trees and horses litter the hillside above the pond. The stallions move the mares and their young closer together and put up a front for the bachelors. Our lunchtime show is getting more intense.

Even to a non-horse person such as myself, the mustangs look different from the domestic horses we passed in corrals on the way here. Nancy tells us they are the descendants of horses brought to the New World by Spanish conquistadors. One of the legacies of that invasion and colonization is that this wild horse population still roams the hills. It’s likely the Crow people brought the horses up from the area that is now Utah, introducing them to the Bighorn Basin, the Pryor Mountains, and the Great Plains. 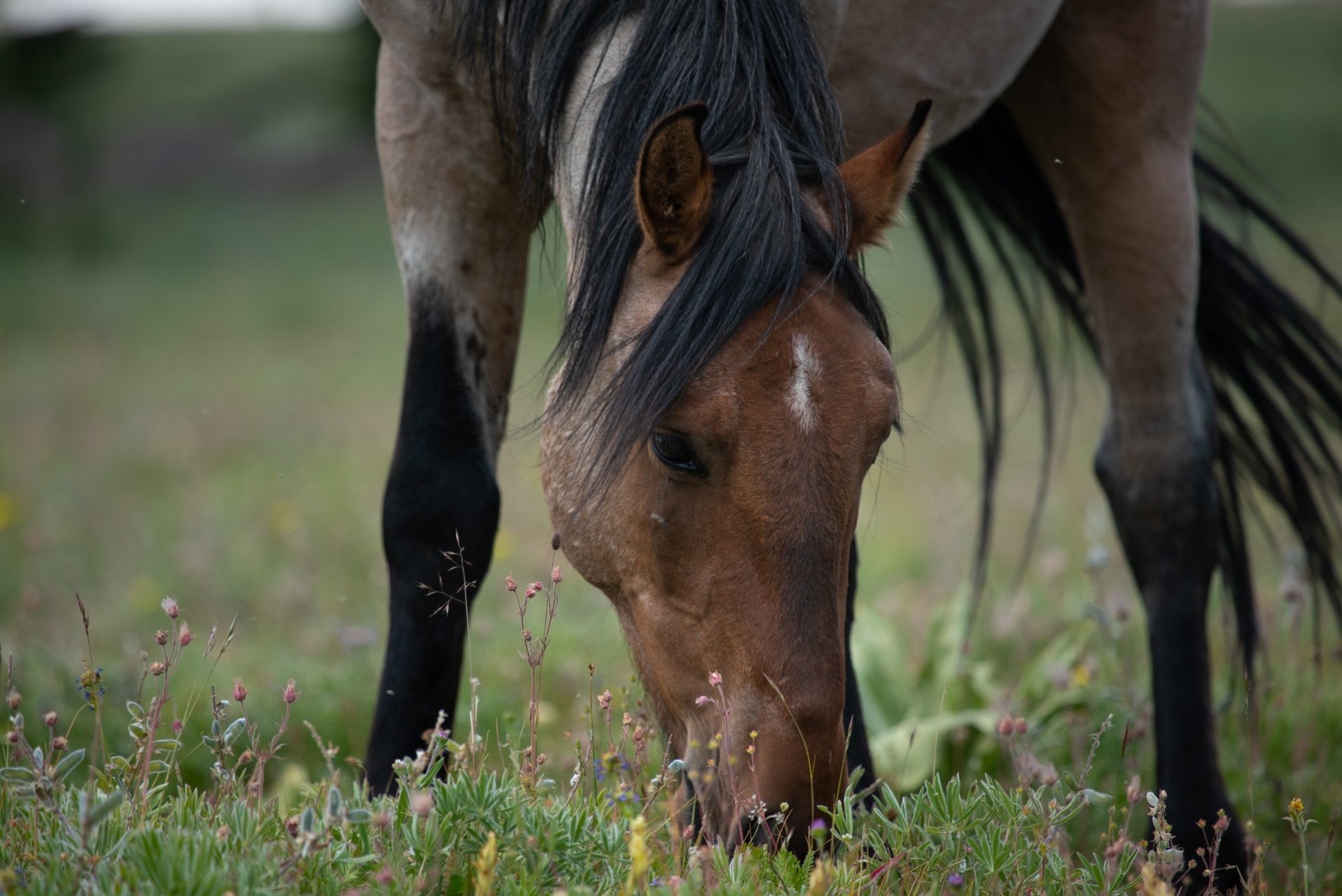 Physically, the Pryor mustangs look stockier; they are shorter and heftier than domestic horses. Nancy describes them as “concrete blocks on legs.” Their V-shaped heads have wide-set eyes, large, crescent-shaped nostrils, and small, rounded ears, often tipped in black. Their rugged bodies allow them to survive in these harsh mountains through brutally cold winters and hot summers. Along with the physical characteristics that set them apart, genetic testing has determined their colonial Spanish ancestry.

We wander around to the far side of the pond, through some junipers, and onto Dryhead Overlook, a limestone cliff overlooking the Bighorn Basin and Dryhead Country, known as one of the most remote areas in Montana. The expansiveness of the view takes my breath away. I can see the Horseshoe Bend Campground overlook in Bighorn Canyon National Recreation Area, where I first saw wild horses just a few months before this trip. We hear mustangs whinnying behind us, still playing out their drama. Below us is the Bad Pass Trail, where 10,000 years of archaeological evidence of people in the area is spread out in a grand vista. Visiting the range isn’t just about the horses; it’s about this whole landscape and its history.

Walking back to the horses, I ask Nancy why she thinks mustangs and their range should be protected. In my mind, they aren’t really wildlife — they are fenced in, named, given contraception to control their birthrate, and adopted out when they go over the BLM’s “adequate management level” of 90 to 120 horses. In fact, they aren’t even managed by the U.S. Fish and Wildlife Service the way other wildlife is, but rather by the governmental organization in charge of administering public lands.

Nancy says people have strong cultural and historic ties to the horses. Like protecting a historic structure, maintaining mustangs protects our national heritage. She adds, “We have to ask, ‘Do the Pryor horses add value or detract from the Pryor Mountains?’ And there is no question: They add value. That’s why most people come to the Pryor Mountains.”

Many people come to the Pryor Horse Range because of one particular horse made famous in the 1995 documentary film “Cloud: Wild Stallion of the Rockies” and its sequel, the 2003 film ”Cloud’s Legacy: The Wild Stallion Returns.” Cloud was a palomino mustang that has since died, but many of his family members still roam the Pryor range.

Cloud’s grandson, Killian, is also a palomino and one of the bachelor horses causing trouble and unrest amongst the horses gathered near the pond. He’s the one with the limp and is covered in fight marks. Steve tells me he was dubbed “Dennis the Menace” when he was young. At 4 or 5 years old, he was still nursing and at the same time trying to breed mares. He attempted to separate a mare from his dad’s band to no avail. “Now he’s gaining some humility,” Steve says.

As we leave the meadow and head back down Burnt Timber Ridge Road, we start counting how many horses we’ve seen so far. We approach the number 60 when Nancy spots several other horses in a smaller meadow.

Nancy points out Boulder, Cloud’s son and a sooty palomino. The black hair sprinkled across his body makes him look dirty all the time. Cloud’s daughter, Nimbus, looks just like Cloud. His 27-year-old mother, Phoenix Rising with the Sun, grazes near his daughter, Juniper. “Some people say Cloud died. I don’t think so; he lives on with his family,” Nancy says.

As we bounce down the limestone steps that claim the name “road” on our way back to Lovell and the mustang center, we tally 101 horses that we spotted on our day’s adventure. We descend from a mountain meadow, through red hills, and five ecological succession zones to a desert of dried mud, sage, and juniper. Horse trails parallel the road most of the way, outlining the mustang’s journey up the mountains in summer and down in winter.

The horse trails, like the horses themselves, are ingrained in this environment. Looking at Google Maps, I note the trails stand out as well as the road does. Mustangs will continue to roam these hills, as will the people who love to watch them. 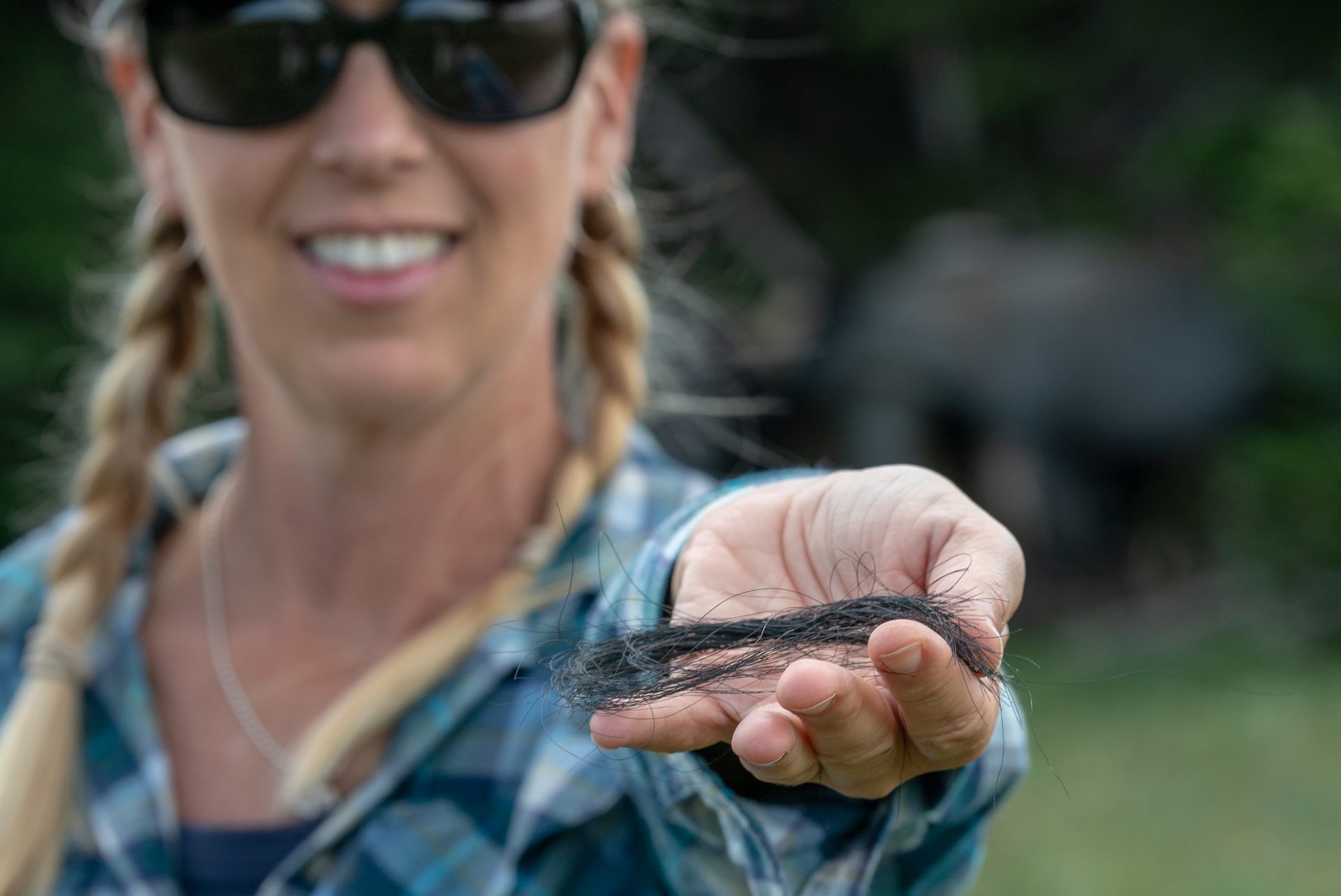