One of the things we always look for in our travels is to experience the outdoors through both leisurely and adventure activities. White water rafting in Scotland with Ace Adventures was one of the activities in Scotland that allowed us to get up close and personal with the beautiful landscape of the Highlands.

After making our reservation for a cottage in Cullen, I started looking for the different outdoor activities Scotland had to offer and came up with white water river rafting.

Actually, Anders and I signed up to go tubing and cliff jumping on the Findhorn River as part of the Moray Walking and Outdoor Festival. It rained and rained and rained leading up to our trip (and after), making the water level in the river too high for tubing. Instead, we got to try some of the best white water rafting Scotland has. Later, the whole family jumped in. 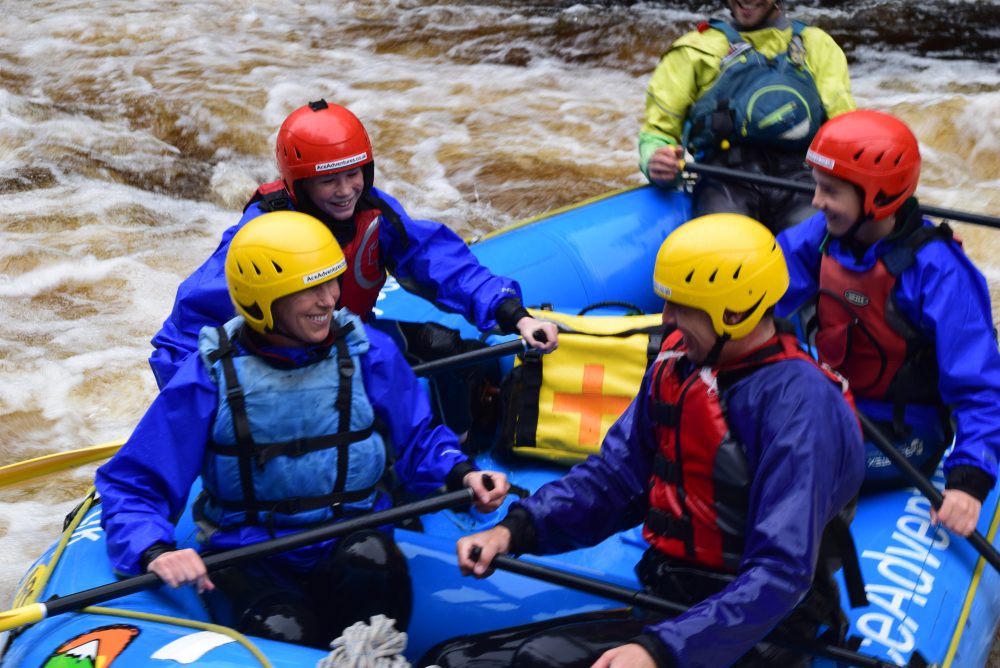 Anders and I did a half-day trip on a lovely section of the River Findhorn with the Ace Adventures crew. This river is gorgeous. While I love the adrenaline rush of the white water rapids, I appreciate moving through a beautiful canyon even more.

We also really enjoyed walking parts of the Moray Coast Trail, wandering through standing stones and combing castles and peering into gloups and geos on the Orkney Islands – there are so many fun things to do in Scotland that also helped us connect with the country and enriched our visit. 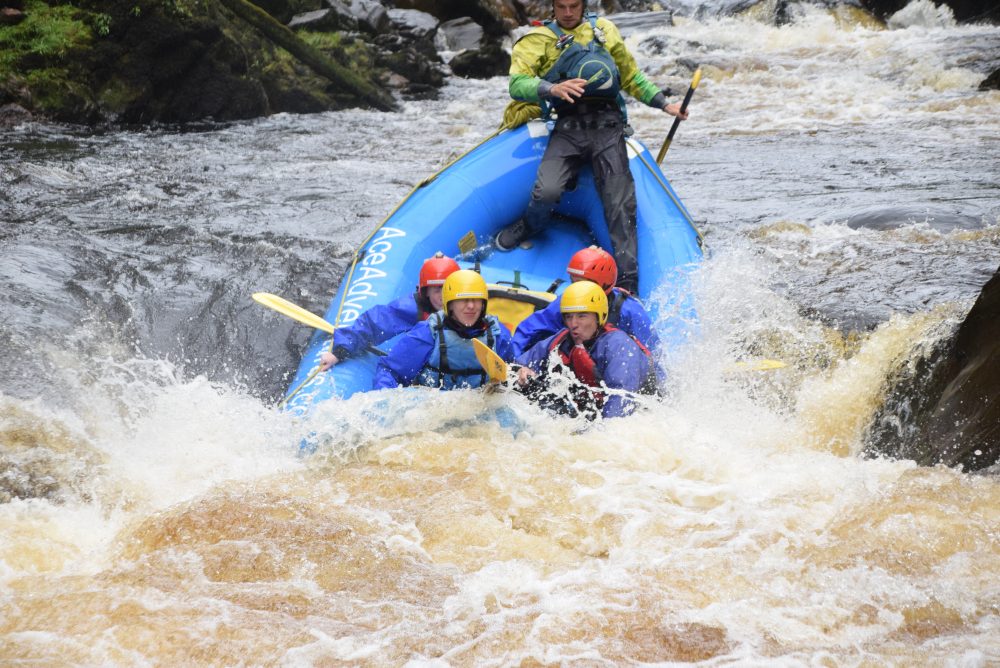 The Findhorn River is one of the longest rivers (62 miles) in Scotland. It starts in the Grampian Mountains in the Scottish Highlands and drains into the North Sea at the Moray Firth. It’s known for its exciting kayaking and white water rafting trips. The Findhorn is also famous for salmon and trout fishing and people come from around the world to cast a line here.

We were staying on the Moray Coast, but rafting the Findhorn is one of the best things to do in Aviemore since it is just as close to that popular, outdoorsy town as it is to Cullen.

We met at the white water rafting center to check in and get our wetsuits, helmets, and life jackets. From there we hopped into a van and went to the put-in. Then we bounced and splashed through grey schist boulders and cliffs. The water is the color of deep red wine; it’s almost black since it runs through peat further upstream. It’s pretty mysterious looking and you can’t see more than a couple inches below the surface. 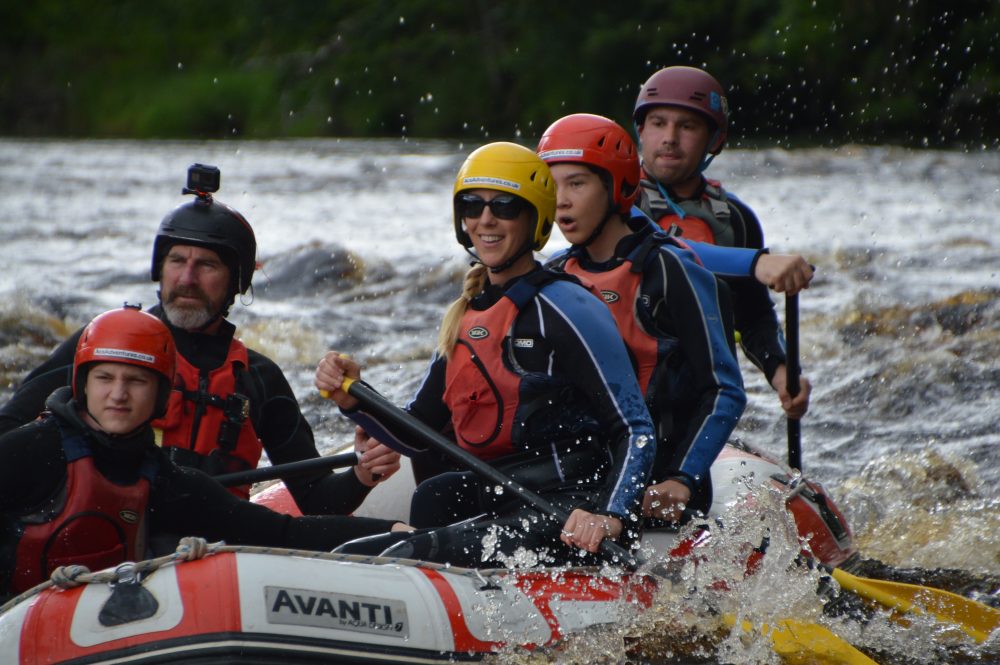 Our rafting trip guide, Johnny, was on his first run with a group, but he did a great job. We were lucky to have Ace Adventure owner, Jim, in our boat, as well, so we could ask all the questions. Jim started the rafting company fourteen years ago and has built it into one of the best rafting companies in Scotland. His dedication to safety and fun, along with an outstanding river to run, made for a excellent day in nature.

Anders and I had so much fun on our Findhorn white water rafting adventure, that when Jim invited us back for a full day trip with the whole family, we jumped at the chance. Jim promised that the scenery on the lower section would be even better and the rapids more exciting. Our other time white water rafting Europe was in Bosnia and Montenegro and we were anxious to compare. 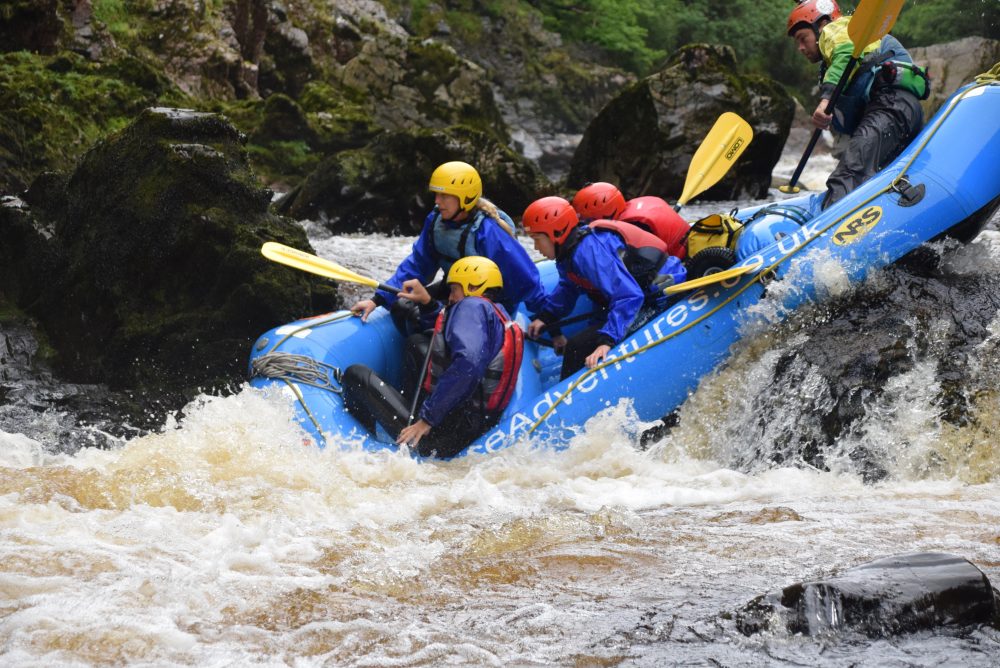 We gathered at the Ace Adventures Scotland headquarters south of Forres. It’s a beautiful drive from Forres and worth venturing back here just to see it. There are several hiking trails, including the well-known Randolph’s Leap trail.

Once again, we donned wetsuits, helmets, and lifejackets in their clean changing and shower rooms, and loaded up in the van. We started our second white water rafting UK trip in the same place we ended the previous trip. This time our guide, Jordy, maneuvered us between rocks, through rapids, and over little falls. The rapids were indeed bigger – mostly class III and IV – and there were more of them.

It was big enough that we felt a thrill, but never felt unsafe or that it was too big for our family. Finn was a little freaked on the first big rapid, but once we made it through unscathed he was good to go for the rest of them.

When I look back at some of the pictures Ace sent us, it does look pretty thrilling. I love that they take photos and video for their guest. Our facial expressions in some of them are hilarious.

Ace Adventures does other family white water rafting trips on mellower segments, if that’s what you are looking for. I am not sure I’d bring a little kiddo on this particular trip, but seven or older would be fine, in my opinion. It’s important they know how to hold on, because there are a lot of rocks in parts of the Findhorn and it could be pretty scary to dump a kid in one of those sections. 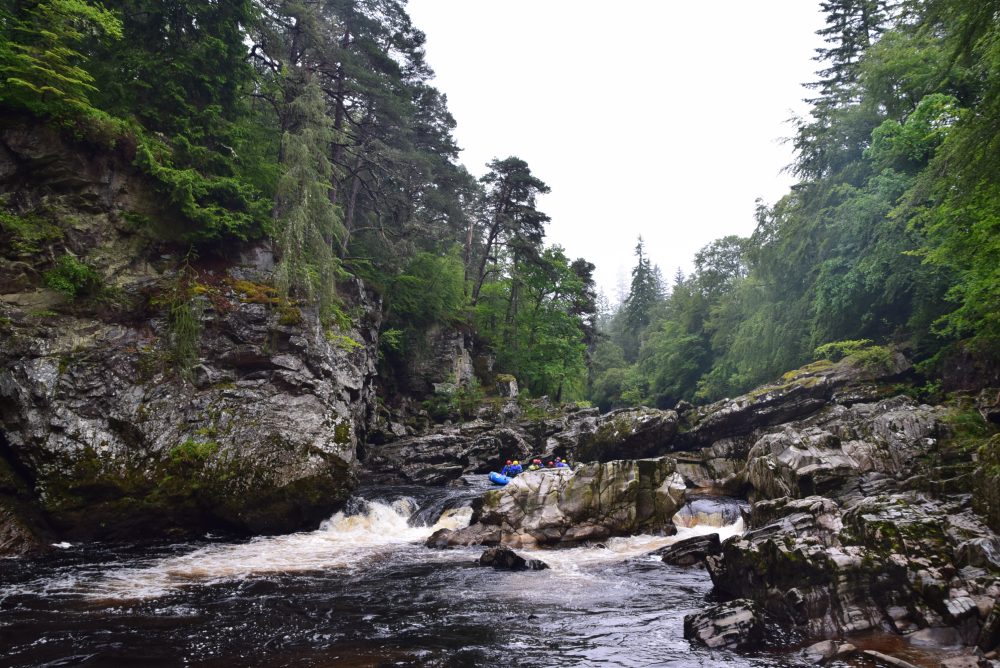 Ace is the only company that does river rafting trips on this section of the Findhorn, partially because it is pretty technical. I am so glad we went on this wild water rafting trip, since it was super fun and exhilarating and the scenery was breathtaking.

We floated through Randolph’s Leap – a little squeeze in the rock that I thought might be too narrow for our boat. It’s a long story, but the gist is that either a man on a horse, or four men without horses, were being chased by Thomas Randolph, the Earl of Moray (and nephew to Robert the Bruce) and his men. They leapt across this chasm in the slippery rocks in an attempt to escape. This was during the Scottish Wars of Independence and Randolph was pro-Scotland while the others were pro-England. 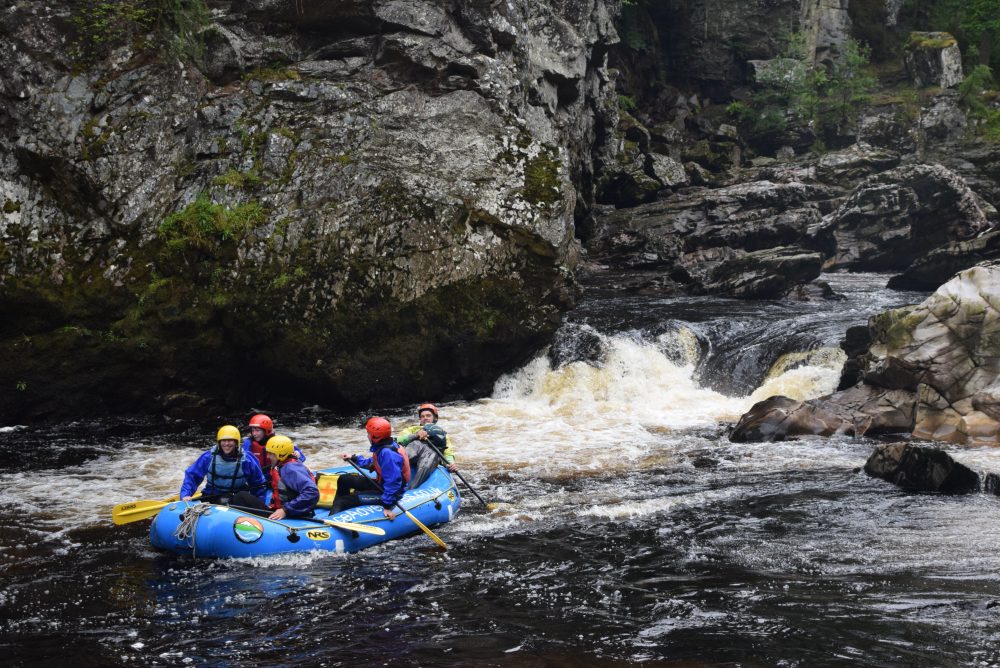 We popped through in the raft without much fanfare and I am glad I didn’t have to make the leap above.

The schist boulders and cliffs of the River Findhorn are just the kind of geology I could stare at all day. The river canyon was really lush with vegetation – it almost felt like somewhere tropical (except that it was pretty chilly out – thank goodness for those wetsuits and jackets, which kept us warm and comfy).

At one point, the guides pulled the boats into an eddy and we were given the chance to jump off a cliff into the deep, tannin-stained water. Only Henry took them up on this. 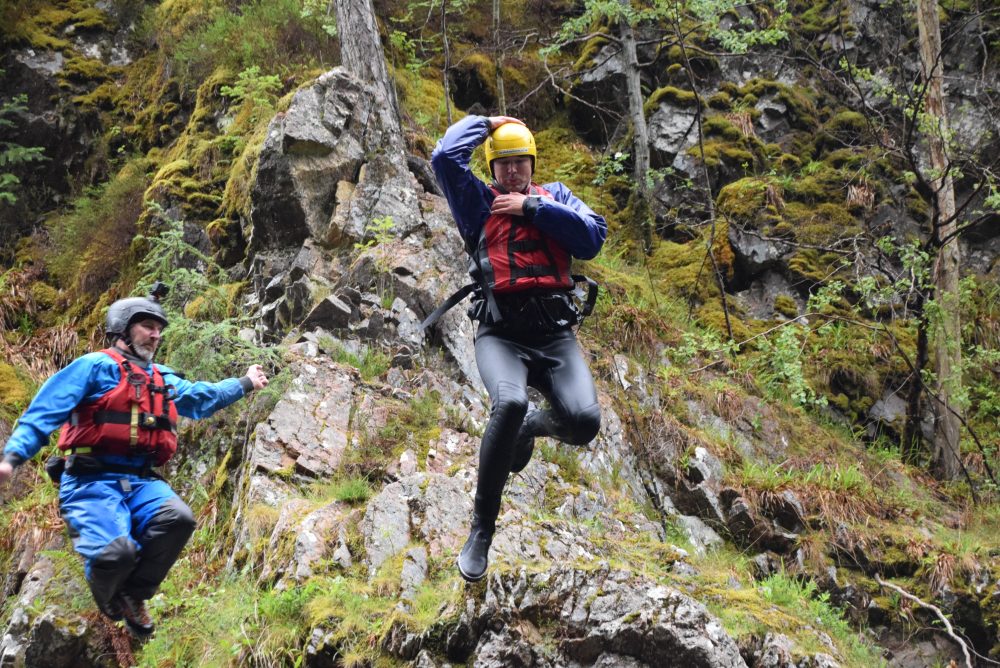 Anders and I thought it would be too cold and weren’t interested in getting in the water. Finn doesn’t jump off cliffs. The first jump wasn’t too high and looked like fun, but then they kept climbing higher. By the third height, it looked kind of scary. You can see Henry take the plunge in the video.

Toward the end of our day, the canyon opened up and the rock abruptly switched to Old Red Sandstone like we had seen all along the Moray Coast on the island of Hoy in the Orkneys.

I haven’t tried the others, but this section of the Findhorn is rumored to be one of the best whitewater rafting adventures in the UK. The same goes for white water kayaking UK. All Scotland vacations should include the best white water rafting UK has to offer and I am so glad we fit this into our trip, twice. 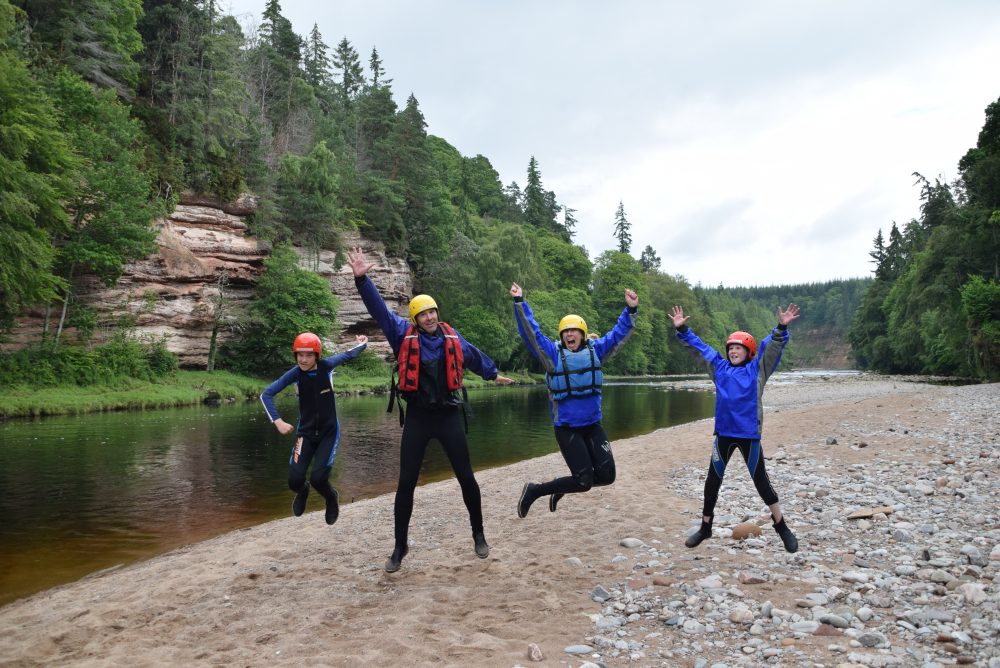 If you are thinking about an outdoor adventure in Scotland with Ace white water rafting, they offer river rafting packages, camping in tents and huts, canyoning, tubing and cliff jumping, paintball, and a disc golf course. You will find some of the best white water kayaking Scotland has to offer. Ace Adventures also offers white water rafting classes, bush craft, and first aid classes, if you want to brush up or learn new skills.

Make your reservation for Ace whitewater online or check their Aviemore activities office. Like I said, we were in Moray, but this is the place for white water rafting Aviemore, too.

Thanks to Ace Adventures for hosting our second trip and getting us hooked on the best white water rafting in Europe. All photos and video are courtesy of Ace Adventures. 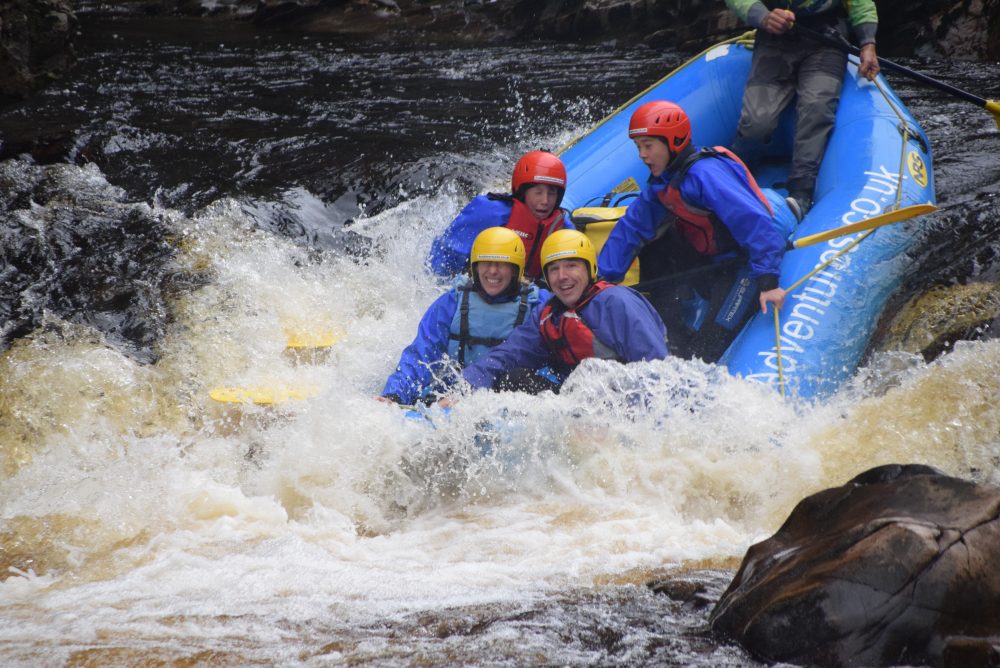 If you are planning a trip to Scotland, I’ve got you covered. After more than nine weeks in the country, we saw and did a lot! 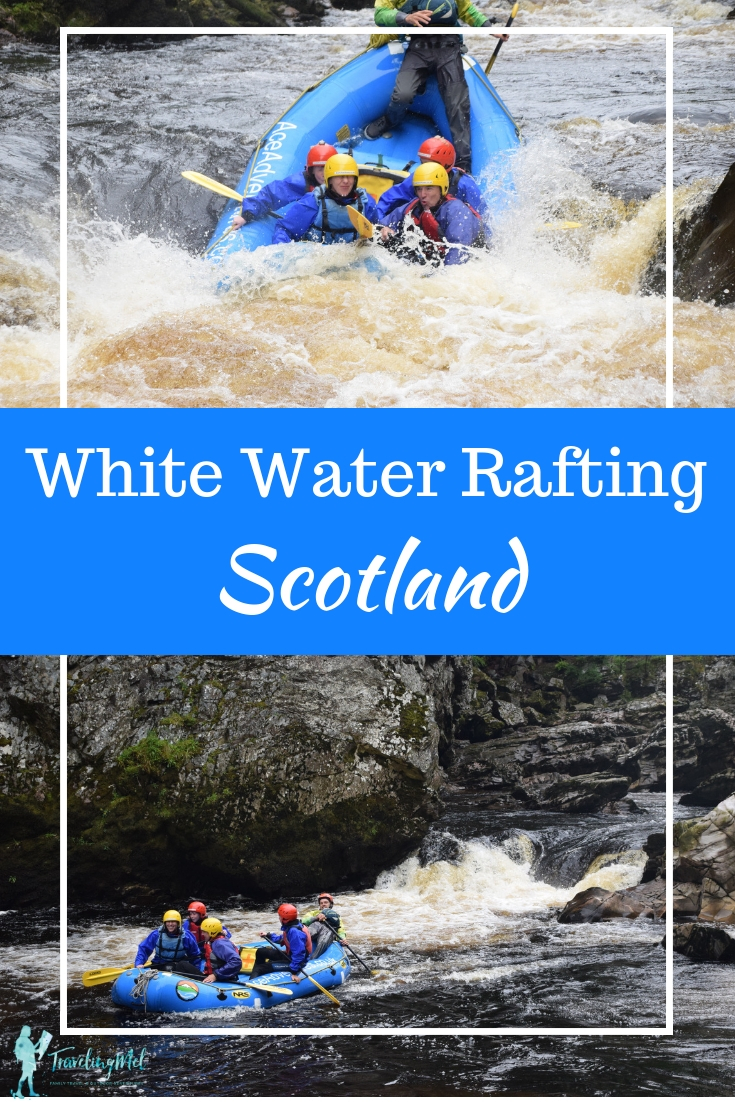 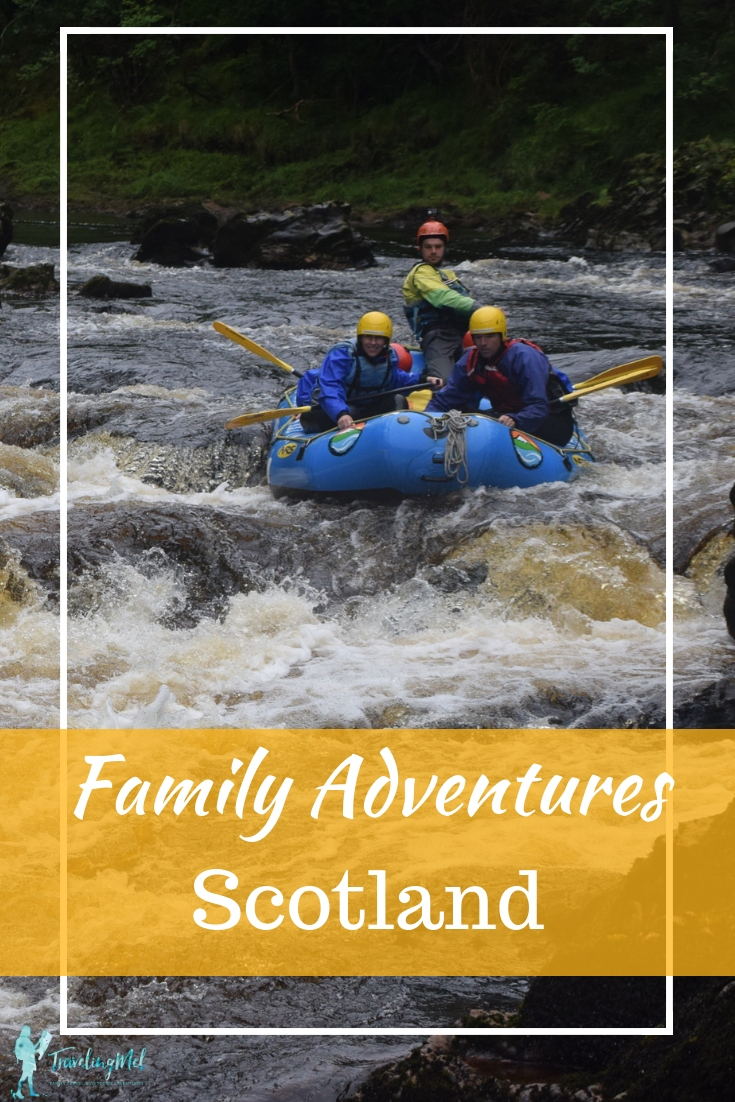