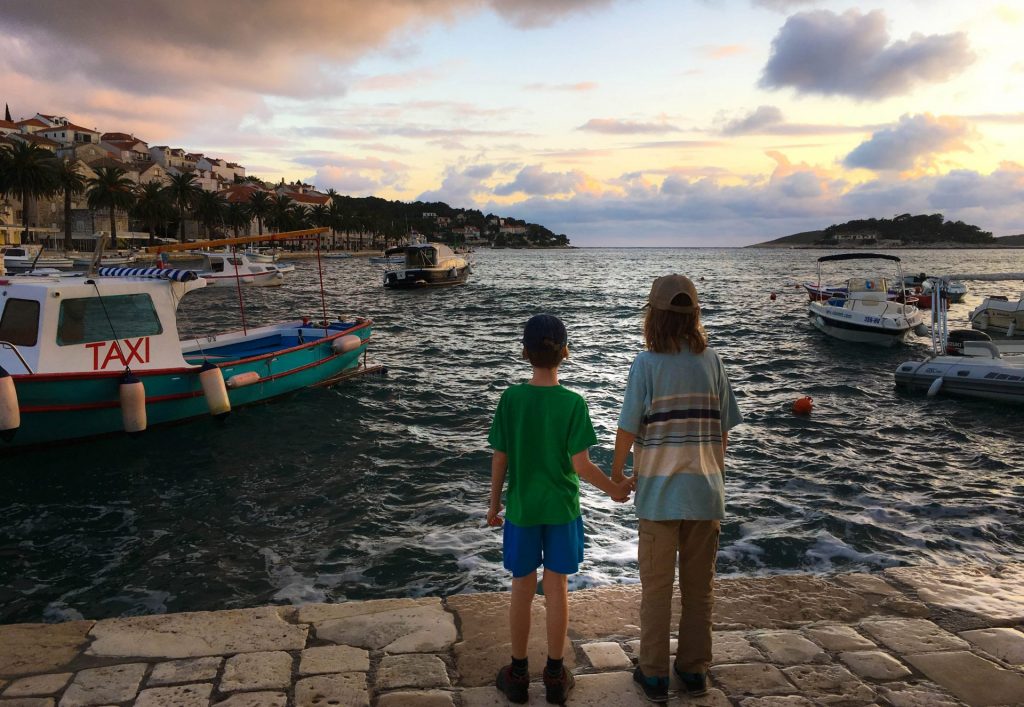 It’s time for book club and this month I am sharing books set in Croatia. This one was a little harder than books set in Italy, but I found a few good ones. I also started a couple I didn’t finish. Croatia is a little country, and while it is big with beauty, there just aren’t as many people, thus writers, as there are in some of the other countries we are visiting. In fact, a few of these books aren’t even written by Croatian authors.

If you are wondering, “what should I read before a trip to Croatia?” or “What should I read while in Croatia?” here’s your list. Some of these are fiction books about Croatia, some are Croatian literature in English, and I will even throw in a history of Croatia book and a couple of the best travel books on Croatia. Happy reading!

Girl at War: A Novel

We read this in my IRL book club and I loved it. I was hesitant to start it because it seemed fairly depressing, which it kind of is, but the story is so good. The civil war in Yugoslavia is one I was alive for and remember, though not well. In Girl at War, Sara Novic gives us an on the ground, though fictional, account of a girl living through it. Here’s a quick Girl at War summary: The story starts before the war when Ana was ten years old. She lives through it and eventually ends up in America where she tries to pretend it never happened. Eventually, she goes back to Croatia to sort out her past. Girl at War by Sara Nović really is so good whether or not you are ever going to Croatia.

Buy Girl at War: A Novel on Amazon or listen to the Girl at War audiobook.

Not set in Croatia outright, it is generally agreed that it takes place there. The author, Obreht is from Croatia. I read this awhile ago, so I don’t remember all the details, but I do recall really enjoying the book. This is another one you don’t need to go to Croatia or the Balkans to love. “In a Balkan country mending from war, Natalia, a young doctor, is compelled to unravel the mysterious circumstances surrounding her beloved grandfather’s recent death. Searching for clues, she turns to his worn copy of The Jungle Book and the stories he told her of his encounters over the years with “the deathless man.” But most extraordinary of all is the story her grandfather never told her—the legend of the tiger’s wife.”

A beautifully written story about a man named Duro and the small Croatian town of Gost. When a family moves into the “Blue House” near his own, he becomes their handy man or “hired man.” As he fixes up the house and befriends the English family he recalls memories of being in Gost before, during, and after the Balkan wars.

Forna doesn’t take sides or even say who is fighting who in the part about the war. I love that about this book because you can just see how individuals and communities are affected without needing to decide who is “right.” Her descriptions of the natural area around Gost are lovely and really set you in the place.

“The Hired Man is a story of lost love, dangerous history, and quiet malice. ‘Not since Remains of the Day has an author so skillfully revealed the way history’s layers are invisible to all but its participants, who do what they must to survive’ (The Boston Globe).”

Our Man in Iraq

A contemporary story, this book takes place in post-war Croatia. It’s about a young man trying to figure out his place in the world where Croatia, and Zagreb in particular, is trying so hard to shake off the 90s and be part of Europe. Of course, history is hard to let go of. Note: It’s a little racy in parts, but also has some Croatia funny — every culture has its own sense of humor. This is one of those Croatia books you should read if you are in Zagreb and want to get a young person’s perspective of what it’s like to try to make it on their own. Don’t let the name fool you, this story takes place in Croatia and is about Croats.

Robert Perišic is a Croatian writer and this book is translated by Will Firth.

Buy Our Man in Iraq on Amazon.

I didn’t really like this book. Maybe because there was no story. What was it even about? However, if we had gone to Dubrovnik, I think I would have appreciated the history and travelogue-like sections. If you are looking for books set in Dubrovnik, this might fit the bill. Otherwise, check out my best Croatia travel guide books below.

Other books that are set in Dubrovnik or partly in Dubrovnik include: The Sound of Blue by Holly Payne and The Woman Who Lost Her Soul by Bob Shacochis.

Running Away to Home: Our Family’s Journey to Croatia

I really enjoyed this book. Jennifer Wilson and family move from Iowa to Croatia for six months or so to research her family genealogy. She is a witty writer and pokes fun at herself, as well as the people she gets to know in this small village in the mountains. And of course, she learns a little more about herself in the process. I especially liked this book because it took me to a region of Croatia we didn’t visit, so I felt like my trip was expanded a bit. This is one of the Croatian reads that kept me entertained while I learned about Croatian life…a perfect mix.

BuyRunning Away to Home: Our Family’s Journey to Croatia on Amazon.

This is another funny one about a guy who meets a Croatian gal in college and ends up marrying her and moving to Split. Each chapter is centered around a particular Croatianism – coffee culture, their fear of drafts, and Mother-in-laws that are determined to feed everyone endlessly. I could see some of these things in our short stay in Croatia and appreciated them all the more knowing what was happening.

After our trip, McClain Brown came out with another book about Croatia: Croatia Strikes Back: The Unnecessary Sequel. Even though it has been almost two years since we were in Croatia, I might need to read this and see what’s going on with Croatia’s “favorite son-in-law.”

Buy Chasing a Croatian Girl: A Survivor’s Tale on Amazon.

This is a classic and, honestly, I did not get very far. I wanted to read it, but the Adriatic view off our balcony of beautiful Croatia put me in more of a beachy, light reading kind of mood. It’s a Croatian travelogue that takes place on the brink of WWII. “A magnificent blend of travel journal, cultural commentary, and historical insight, Black Lamb and Grey Falcon probes the troubled history of the Balkans and the uneasy relationships among its ethnic groups. The landscape and the people of Yugoslavia are brilliantly observed as West untangles the tensions that rule the country’s history as well as its daily life.” It’s a traveler’s history of Croatia and the Balkans before it became the country it is today.

This book came out in 1996 and is about life in Eastern Europe after the fall of communism. The series of essays that make up the Café Europa book explore life in several cities in Eastern Europe, including Zagreb. From the book, “But a visitor to this part of the world will soon discover that we, the Eastern Europeans, live in another time zone. We live in the twentieth century, but at the same time we inhabit a past full of myths and fairy tales, of blood and national belonging, and the fact that most people are lying and cheating or that they have the habit of blaming others for every failure…” It’s an interesting snapshot in time since the book was written not long after the break up of the Soviet Union and Yugoslavia. The author is one of many Croatian writers.
Buy Café Europa on Amazon.

Croatian Tales of Long Ago

This is a book of fairy tales that I got to read to the kids. It’s actually “original narrative plots with ancient Slavic folk mythology. The result is a rich, fantastic world often compared to those of Hans Christian Andersen or J. R. R. Tolkien.” My kids were not super into it, but I was. Maybe if they were younger. I think you can learn a lot about Croatian culture from its fairy tales.

Buy Croatian Tales of Long Ago on Amazon.

This is an adorable book for little kids about a hedgehog who loves his home and the other animals who can’t understand why. It’s written in English and Serbian. The book was first published in 1951 and was immensely popular in Yugoslavia. It’s still part of the Croatian school curriculum.

Maybe you just want a straightforward travel guide to Croatia so you can see the best in Croatia during your trip. There are a lot of guidebooks available and honestly, they mostly all say the same thing. The best travel guide for Croatia is one that fits your travel budget and style.

I’ve always like the Lonely Planet guidebooks as they were written for “real travelers” more than tourists and it was important to me to think of myself more as a traveler than a tourist. The labels don’t mean as much to me anymore and Lonely Planet has gotten more mainstream (or maybe that sort of travel has become more mainstream), but I still think they write good guidebooks. Their entries are generally for the more budget conscious traveler or backpacker, but are useful for anyone who wants to explore Croatia.

I didn’t know anything about Rick Steves before we went to Europe (I know…gasp!), but I really like this nerdy guy now. We watched his videos in almost every country we visited on our year long trip to Europe. He does a lot of the things that everyone recommends, although I think he was the one that made certain places, like the Cinque Terre in Italy so popular, but I love how he values getting to know locals and local culture.

Have you read any of these books set in Croatia? What do you think are the best books on Croatia that I missed? 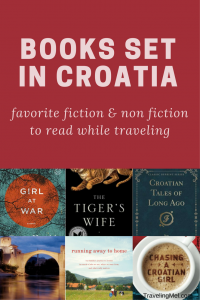